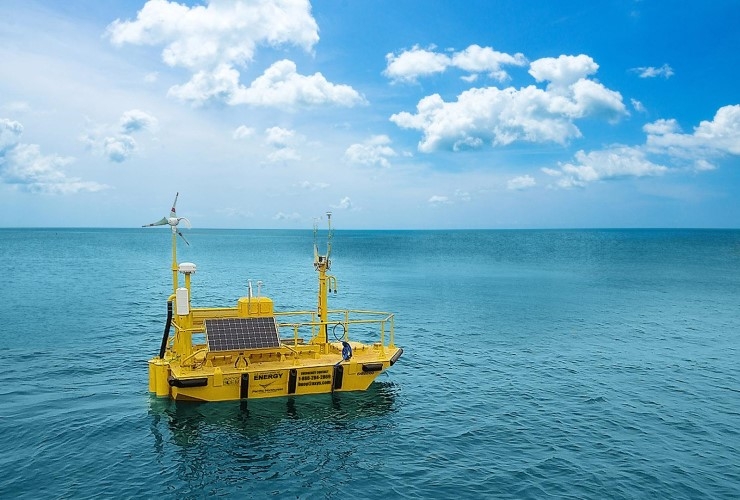 A wind research buoy recently deployed off the coast of California by researchers at Pacific Northwest National Lab.

Unveiled by House Democrats a week before the vote, the package largely comprises bills advanced over the past two years by the Science Committee and Energy and Commerce Committee. While the legislation secured some Republican backers, Republicans on the House Science Committee rallied against it, raising procedural complaints and arguing it focuses too heavily on R&D for “mature” renewable energy technologies. The bill ultimately passed on a largely party-line vote of 220 to 185, with seven Republicans voting in favor of it and 18 Democrats against.

Republicans described the legislation as a “partisan messaging exercise,” but Democrats said they view it as a serious starting point for negotiations with the Senate, which has sought to advance its own bill, the American Energy Innovation Act, with broader bipartisan support.

There is little time left to reconcile the two efforts before the current Congress concludes in January, and lawmakers are preoccupied with other matters, such as negotiations over the federal budget, pandemic relief, and the latest Supreme Court nomination. However, the legislative process could resume where it left off in the next Congress.

The House or Senate legislation would each represent the most comprehensive update to U.S. energy policy since 2007. Both would modify direction for most of the Department of Energy’s applied R&D programs, but the House also recommends significant budget increases, especially for programs related to renewable energy and carbon capture.

This push has been amplified by proponents of the Green New Deal framework. Before voting on the bill, the House approved an amendment introduced by Reps. Debra Haaland (D-NM), Alexandria Ocasio-Cortez (D-NY), and Rashida Tlaib (D-MI) increasing its funding recommendations for solar, wind, water, and geothermal energy R&D by 50% over the amounts originally proposed.

“With climate change accelerating, we can’t afford to wait,” Haaland said, adding, “The federal government needs to invest in R&D and in deployment and the technology maturation needed to enable widespread adoption of renewables and their integration into our energy system.”

Some components of the legislation do have broad bipartisan support, such as measures developed in the Science Committee to expand the Advanced Research Projects Agency–Energy and geothermal R&D programs. By contrast, the bill’s solar and wind energy R&D provisions advanced through committee over the objection of Republicans, who argued Congress should instead focus on bolstering basic research programs funded through DOE’s Office of Science.

“Without the innovation that has come from DOE basic research, we wouldn’t have successfully reduced emissions through clean, affordable natural gas,” House Science Committee Ranking Member Frank Lucas (R-OK) said on the House floor. “That is why a clean energy legislative package that fails to include comprehensive Office of Science provisions is not a serious proposal even if it is 900 pages long.” 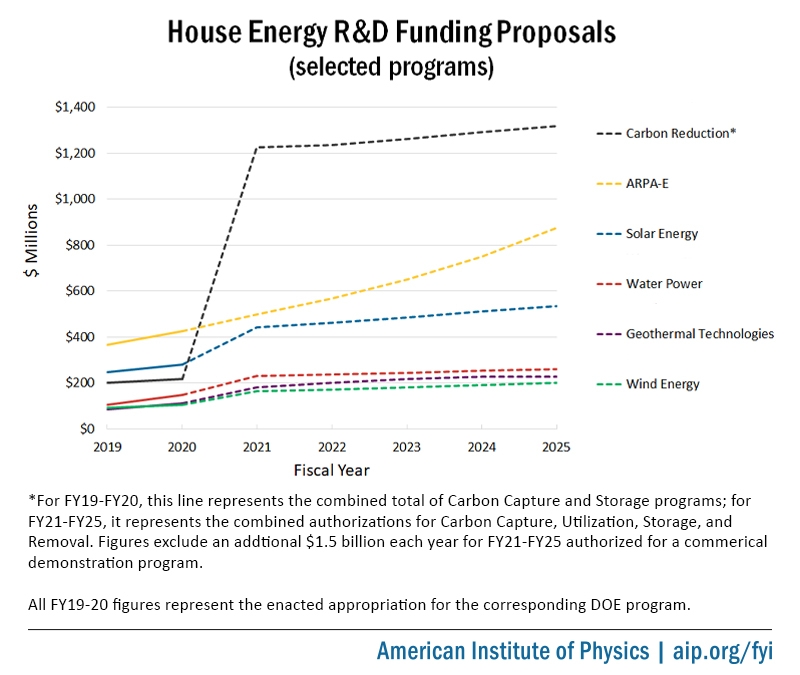 Aside from its funding recommendations, the bill backs a variety of specific R&D programs and research infrastructure projects, such as a “next generation” solar manufacturing initiative, offshore wind testing facilities, and expanded R&D sites for marine and geothermal energy technologies.

The bill places an especially strong emphasis on expanding carbon capture, storage, and utilization R&D efforts, including by directing DOE to establish at least three Carbon Capture Test Centers for power and industrial systems as well as a carbon capture technology commercial demonstration program. The bill would also establish a new program dedicated to developing technologies that remove carbon dioxide directly from the atmosphere, which would include creating at least one Direct Air Capture Test Center.

Some progressive and climate advocacy organizations have opposed the bill’s support for carbon capture, calling it a “false solution.” But Science Committee Chair Eddie Bernice Johnson (D-TX) defended the measures on the floor, arguing, “To realistically hope to combat the worst effects of climate change, we have to invest in technologies that can clean up the bulk of our current pollution sources, both here and abroad.”

Both the House and Senate bills support DOE expanding efforts underway to promote the development of “advanced” nuclear fission reactors that depart from traditional designs, such as by using alternative fuels and coolants.

This includes providing statutory backing for a program created last year through appropriations legislation that funds advanced reactor demonstrations, for which the House bill suggests providing about $680 million annually over five years. Yesterday, DOE announced it has awarded a total of $160 million to TerraPower LLC and X-energy for the first year of the first two demonstration projects.

The bills would also reaffirm congressional support for the Versatile Test Reactor, a planned user facility that would enable companies developing advanced reactors to expose fuels, components, and materials to radiation conditions analogous to what they would experience in actual use. DOE approved the project’s conceptual design last month along with a preliminary cost range of $2.6 billion to $5.8 billion. The House bill recommends that Congress steadily ramp up annual funding for it to $765 million by 2024.

Although the bill does not provide comprehensive direction to the Office of Science, a floor amendment sponsored by Rep. Conor Lamb (D-PA) updates policy for the office’s fusion energy programs. It directs DOE to “address the scientific and engineering challenges to building a cost competitive fusion power plant” in the U.S. while honoring U.S. obligations to the international ITER tokamak facility currently under construction in France. 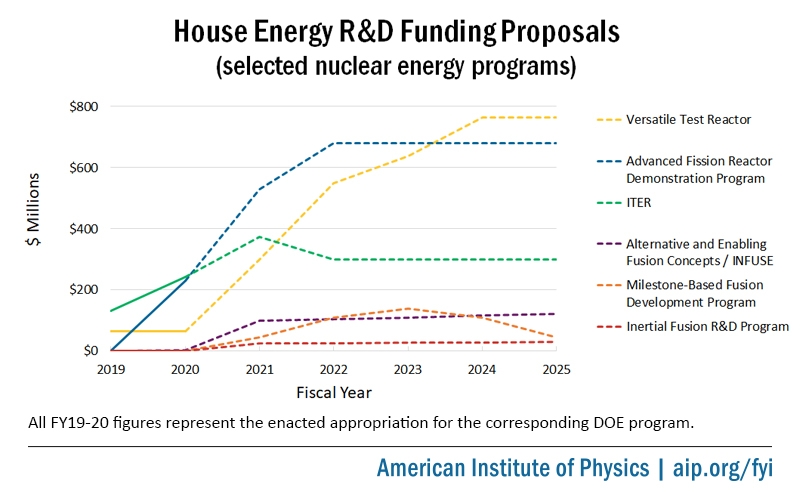 The House bill also incorporates a variety of other R&D provisions that were previously introduced as bipartisan standalone bills. These include, but are not limited to, the following: