The National Science Foundation has agreed to recommendations from the JASON advisory group on ways to guard against foreign governments exploiting the U.S. research system. 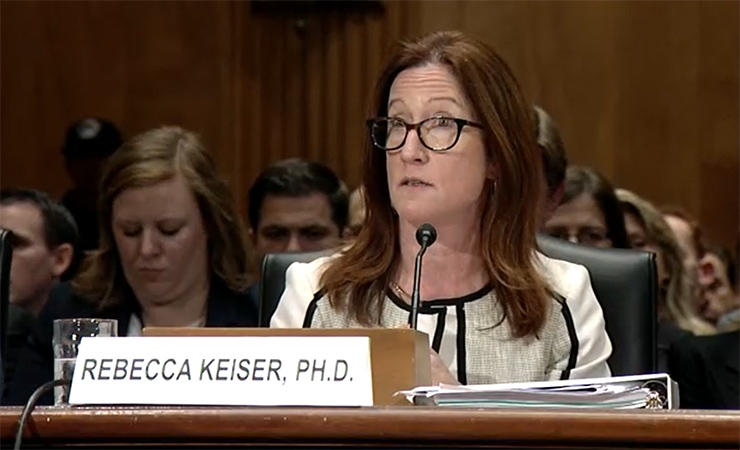 Rebecca Keiser, the head of NSF’s Office of International Science and Engineering, testifies at a Senate hearing on Chinese talent recruitment programs. NSF has appointed Keiser to serve as its first chief of research security strategy and policy.

On March 2, the National Science Foundation announced it has agreed with recommendations from the JASON science advisory group on ways to guard against foreign governments exploiting the openness of the U.S. research system.

NSF commissioned the JASON study in early 2019 to assess concerns raised by security officials and lawmakers that the Chinese government is unfairly taking advantage of early-stage research and intellectual property produced in the U.S. The JASON panel, comprising an anonymous group of elite scientists, concludes there is legitimacy to concerns about violations of research ethics and lack of reciprocity and transparency, but states the scope and scale of the problem remains “poorly defined.”

Citing longstanding benefits the U.S. has accrued from opening its research system to international talent, the panel argues against establishing new restrictions on fundamental research. It instead calls for the research community to embrace enhanced transparency measures and adopt risk-assessment tools, among other actions.

In her foreword to the response report, NSF Director France Córdova writes that the agency “strongly agrees” with JASON’s views on the importance of continuing to encourage foreign-born scientists to train and work in the U.S. Córdova also states the agency “appreciates JASON’s affirmation that the actions of some foreign governments pose a significant threat to the U.S. research ecosystem” and lists steps NSF has already taken to address security concerns.

To oversee further efforts, she notes NSF is creating a new position dedicated to research security strategy and policy. The agency has appointed the head of its Office of International Science and Engineering, Rebecca Spyke Keiser, to the job.

Among its recommendations, JASON calls for the concept of research integrity to be expanded to encompass full disclosure of conflicts of interest and time commitment, with consequences for violations similar to those for research misconduct. In response, NSF notes its Office of Inspector General (OIG) has treated some relevant cases in that manner, though it adds the office has referred others to the Department of Justice because they involve “offenses that may merit civil or criminal action.”

OIG’s latest semiannual report to Congress references three cases in which NSF suspended or terminated grant awards to individuals who failed to disclose foreign affiliations, including the case of a University of Kansas chemistry professor who has been indicted for fraud. The professor has disputed the allegations, which has since led the Department of Justice to elaborate on the initial charges.

NSF also notes it has recently “clarified” its requirements that grant applicants disclose all sources of current and pending research support. It states this information will be used to assess “both the capacity and potential research overlaps of the proposers,” as well as to help identify any breaches of research integrity.

Another central recommendation from JASON is for NSF to reaffirm the principles underpinning NSDD-189, a longstanding presidential directive that maintains the outputs of fundamental research should be unrestricted to the maximum extent possible. In cases where national security considerations compel restrictions, the directive states the research should be classified. Concluding this framework is still appropriate, JASON argues against expanding the use of intermediary sensitivity designations, such as “Controlled Unclassified Information,” finding they are too unwieldy for the task and could ultimately weaken the U.S. research system.

Responding to this recommendation, NSF highlights how its governing board “strongly reaffirmed” the principles underlying the directive in a 2018 statement. However, it adds, “In some cases, there may be a need to protect certain data and information for national, military, or economic security purposes. NSF will work with other U.S. government agencies to maintain the distinction between research that should continue to be made open to the scientific community and research that should be protected due to security concerns.”

While observing there is nothing intrinsically wrong with using incentives such as high salaries, startup funds, and honorific titles as recruitment tools, JASON states certain rewards can “compromise research integrity,” such as contracts that prohibit researchers from disclosing their terms. It observes such contracts can represent a form of coercion, citing a recent Senate investigation into China’s Thousand Talents program that provides examples of recruitment contracts that allegedly “violate U.S. research values.”

JASON defines deception as encompassing the provision of false information as well as failure to report rewards, institutional affiliations, or other pertinent information. Such deception by omission could take the form of not reporting a connection to a military institution or past coursework in sensitive areas. It states that deception is the “most widespread type of influence,” but that it is unclear how common it is. JASON leans on anecdotal evidence, for instance, to suggest there are "networks" of foreign students that advise individuals seeking to study in the U.S. to avoid mentioning interest in sensitive research areas to increase their chances of getting a visa.

JASON likewise found it difficult to assess the prevalence of intellectual property theft, which it states in academic settings could range from stealing research samples and software to inappropriately sharing grant proposals and “ideas.” It also observes there have been instances where what intelligence agencies and law enforcement officials have interpreted as theft “actually appears to be the collegial sharing of academic work.”

More broadly, the report states there has been a lack of effective communication between security officials and university staff and recommends NSF work with each group to help develop an “evidence-based description of the scale and scope of problems posed by foreign influence in fundamental research.” It also calls on NSF to develop “project assessment tools” that can help scientists assess risks. It suggests one such tool could take the form of a “catechism” of questions for scientists, universities, and research funders to ask before entering into any given international engagement.

Responding to these recommendations, NSF notes it has been involved in such efforts through the Joint Committee on the Research Environment (JCORE), an interagency body that is coordinating research security initiatives across the government.

OSTP gearing up to issue guidance

JCORE has been gathering input since it was established by the White House Office of Science and Technology Policy last May and has produced no public recommendations to date. Prodding it along, Congress has directed OSTP to produce an assessment of “current risks and threats to research integrity from foreign influence” that takes into account the JASON panel’s findings.

In a press call this week, OSTP Director Kelvin Droegemeier said that in the coming months JCORE will issue outputs that range from “formal guidance to agencies, to best practices for universities, to educational materials, and so on.”

Commenting on the JASON report, he remarked, “I was very pleased that everything that they spoke to was included in things that we had already talked about. In fact, some of the things that we shared with them were kind of a revelation to them.”

Asked if the government plans to reaffirm or revise NSDD-189, Droegemeier replied, “We are continuing to look at that and other things. I would say at this point we're still in the discussion phase and haven't made any decisions.”