Responses to the White House’s request for input on options for increasing public access to research outputs run the gamut from denouncing the prospect of government intervention in the publishing sector to calling for a new paradigm that offers immediate free access to papers. 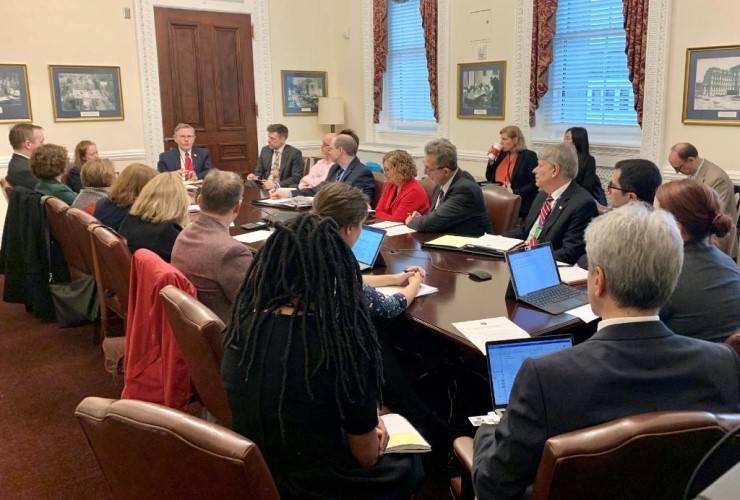 White House Office of Science and Technology Policy Director Kelvin Droegemeier met with representatives from federal agencies and non-profits on March 3 as part of a series of stakeholder meetings this year on open access policy.

Universities, libraries, and scholarly publishers have staked out a spectrum of positions in response to the White House Office of Science and Technology Policy’s request for information on options for increasing public access to the products of federally funded research. Though the respondents broadly agree on the goal of increasing access, some argue the time is ripe for a paradigm shift in scholarly communication while others maintain it is prudent to expand and experiment with existing open access models.

OSTP released the RFI in February following a strong reaction from stakeholder groups to reports of an impending executive order that would require papers produced from federally funded research to be made freely available upon publication. Under the current policy, issued by OSTP in 2013, such papers must be made freely available after a 12 month embargo period. The RFI, which closed this month, sought input on how the U.S. research enterprise could benefit from “immediate access” to research publications, data, and code, though it did not refer to any potential action.

In parallel, OSTP has also held a series of closed-door stakeholder meetings. The most recent that it has publicized was an April 30 meeting with representatives from publishers, universities, libraries, funding institutions, and scholarly communication researchers. OSTP has not disclosed who has participated in any of the stakeholder meetings. A spokesperson for the office did indicate, though, that it plans to eventually post the RFI submissions it has received. (Update: OSTP has since posted all the submissions.)

Submissions from associations representing research libraries and universities both stress the barriers imposed by high paywalls.

In a joint response, the Association of American Universities and the Association of Public and Land-grant Universities cite the “excessive subscription costs” under existing publication models in calling for a shift to new scholarly communication approaches. “Specifically, we encourage the agencies and OSTP to support the scientific enterprise in exploring new research dissemination models where peer-review is managed more directly by the academy. This may include peer-review managed by scholarly societies or other self-organized and proven models that ensure the quality of research articles at reasonable costs,” they write.

However, the associations also caution it will take significant time to implement changes to university practices and academic culture. “Moving too quickly to implement new government-wide public access policies could have a damaging, as opposed to positive, effect on universities’ ability to conduct and effectively disseminate new scientific knowledge generated by their faculty and students,” they add.

The Association of Research Libraries, which represents libraries at 124 institutions in North America, offers more extensive criticism of the existing publishing ecosystem, stating that even the most well-resourced libraries have not been able to cover subscription cost increases without paring back parts of their collections. It also laments that the current system incentivizes researchers to publish in high-impact journals, many of which are operated by for-profit entities, and that authors are “often compelled to sign over their copyrights to these journals, which places limitations on how digital copies can be shared or used.”

Accordingly, the association argues, “It is time for a new paradigm for scholarly publishing in which the content of scientific outputs is freely and immediately accessible, multiple stakeholders contribute to the sustainability of open infrastructure elements, and publishers charge for specialized services.” It adds this new model would entail “rapid dissemination and experimentation with faster and more efficient peer review, including post-publication, open peer review, and more.”

Other respondents that likewise call for significant shifts away from the current publishing paradigm include the Coalition of Open Access Policy Institutions and the Open Research Funders Group.

The journal-publishing arm of the American Institute of Physics, the American Astronomical Society, the American Geophysical Union, and the American Association for the Advancement of Science are among the non-profit scientific society publishers that have posted their responses. These submissions highlight the societies’ current support for a variety of open access models, such as “gold” open access journals, through which authors pay article processing charges to make their papers freely available upon publication. Many also comment on the complementary roles of preprints, which provide immediate free access, and the final version of papers, which benefit from investments in peer review and curation by publishers.

For instance, AIP Publishing notes that preprint sites such as arXiv are a well-established mechanism to quickly communicate results in the physics community. It suggests that OSTP consider pursuing a “preprint first” approach, in which federal agencies would require that preprints ultimately be submitted to an appropriate repository, writing, “Preprints would then provide immediate access to research results while supporting peer-reviewed journals to fulfill their role of registration, certification, dissemination, and preservation.” It suggests this approach is “more sustainable” than eliminating the journal embargo period. More generally, AIP Publishing requests that OSTP commission an independent assessment of the costs and benefits of the 2013 policy that established the 12 month embargo period.

The American Astronomical Society (an AIP Member Society) raises concerns that moving to a zero-embargo policy would place financial pressure on authors, with journals having to increase article charges to offset lost subscription revenue. It suggests this could disadvantage U.S. authors relative to those from countries that subsidize publishers or pay publication fees using government resources.

Cautioning against a uniform approach, AAS adds, “Different scientific disciplines have different, longstanding cultures of scholarship and sharing, and we trust that OSTP will not apply blanket, one-size-fits-all policies that may address perceived problems in one area of science (e.g., biomedical) to the detriment of other areas of science (e.g., physics).”

The Association of American Publishers, which represents a mix of commercial and non-profit publishers, argues forcefully against eliminating the embargo period, stating “such regulatory intrusions would significantly disrupt scholarly communication by rendering irrelevant the copyright protection that lies at the heart of marketplace incentives, investments, and transactions that drive the economy.”

The association also questions the advisability of the government assuming a share of the publication costs, writing, “AAP was deeply troubled by a recent suggestion that the government could replace the private sector and fund the peer review and publication of articles discussing federally funded research for approximately $100 million in additional government spending per year.” It counters that the amount required is more likely to be in the range of $600 million to $1.4 billion. The letter does not cite a source for the $100 million figure, though Science magazine reports that OSTP staff raised it in one of the stakeholder meetings.

More broadly, the association joins others in opposing a one-size-fits-all framework that, it argues, would “force all publishers into one business model that may work for some author and reader communities, but not for others.” As an alternative, it urges OSTP to pursue a policy that encourages “increased free access to articles by supporting voluntary initiatives — coupled with dedicated appropriated funds — to enable more authors to participate in the many open access publishing options offered in the marketplace.”

Disclosure: FYI is a publication of the American Institute of Physics, a non-profit federation of scientific societies. AIP is partially supported by revenue generated from AIP Publishing, a wholly owned but independently operated subsidiary that produces scientific and scholarly journals.