With word of a potential open access executive order reverberating across the scientific community, the White House Office of Science and Technology Policy is seeking further stakeholder input as it moves to increase public access to research results. 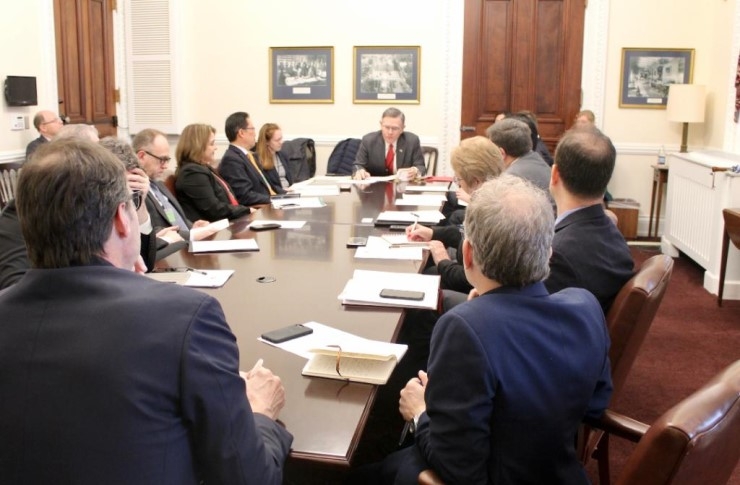 White House Office of Science and Technology Policy Director Kelvin Droegemeier, center, met with publishers on Feb. 6 in the second of a new series of stakeholder meetings on open access policy.

Following a recent flurry of letters alternately opposing and praising a potential executive order on open access, the White House Office of Science and Technology Policy is seeking additional input from the research community. OSTP held the first in a series of stakeholder meetings on Jan. 30, and this week it released a request for information on “approaches for ensuring broad public access to the peer-reviewed scholarly publications, data, and code that result from federally funded scientific research.”

The RFI states OSTP is “engaged in ongoing efforts to facilitate implementation and compliance with” its 2013 memorandum that established open access principles for all federal agencies with over $100 million in annual R&D expenditures. Under the policy, publications arising from research funded by these agencies must be made freely available following a 12 month post-publication embargo period. The policy also requires agencies to increase public access to data resulting from federally funded research, though it does not include provisions pertaining to associated computer code.

The draft executive order that is reportedly circulating within the administration would mandate that agencies no longer allow an embargo period. The RFI does not mention any specific policies under consideration, though it does ask how the U.S. scientific enterprise would benefit from having “immediate access” to federally funded publications, data, and code. It also notes that OSTP is working to address recommendations from a 2019 Government Accountability Office report, which found that progress in implementing the 2013 memorandum’s data access requirements has been markedly uneven across agencies.

Since word of the potential executive order first spread late last year, OSTP has consistently declined to either confirm or deny such a policy is under review. Speaking to FYI this week, an OSTP official said the new series of stakeholder consultations was prompted by the series of letters commenting on “rumored efforts to increase public access.” The official noted the administration is holding meetings with representatives of academic institutions, libraries, commercial publishers, non-profit publishers, and research funders.

Asked if the administration ultimately plans to update the 2013 memorandum, the official replied, “Not necessarily, we continue to explore opportunities to increase public access, but we don't necessarily have a particular mechanism [in mind], nor would we speak to any particular mechanism.” Characterizing the administration’s general stance toward open access, the official said, “This is taxpayer-funded research, and [the question is] how do we make that research more accessible so that we can increase the knowledge and innovation that comes from that research.”

“Making that research available to the general public, to clinicians, to researchers more broadly that might not have access to it, to students and educators, to corporations, small businesses, others, we believe is important,” the official added.

OSTP Director Kelvin Droegemeier has himself provided a few details on his views on open access in past interviews. Asked by the Times Higher Education last May about whether taxpayers should have immediate access to federally funded publications, he replied, “They maybe should — there’s all kinds of options out there being considered and discussed.”

Droegemeier has placed one firm bound on the administration’s approach, dismissing the Plan S initiative’s call for research funders to require that grantees publish in certain types of open access journals. “One of the things this government will not do is to tell researchers where they have to publish their papers. That is absolutely up to the scholar who's doing the publication,” he told FYI in an interview last April.

In a press release announcing the RFI, Droegemeier stated that over the past two years OSTP has held “nearly 100 meetings with publishers, universities, researchers, and others on important issues related to improving public access to U.S. taxpayer-funded research.”

“We continue to actively engage all stakeholders, and with this RFI we are casting a wide net to include as many voices of the research community as possible to ensure that the interests of our researchers, students, and the American public remain at the forefront in our ongoing work,” he added.

Disclosure: FYI is a publication of the American Institute of Physics, a non-profit federation of scientific societies. AIP is partially supported by revenue generated from AIP Publishing, a wholly owned but independently operated subsidiary that produces scientific and scholarly journals.​