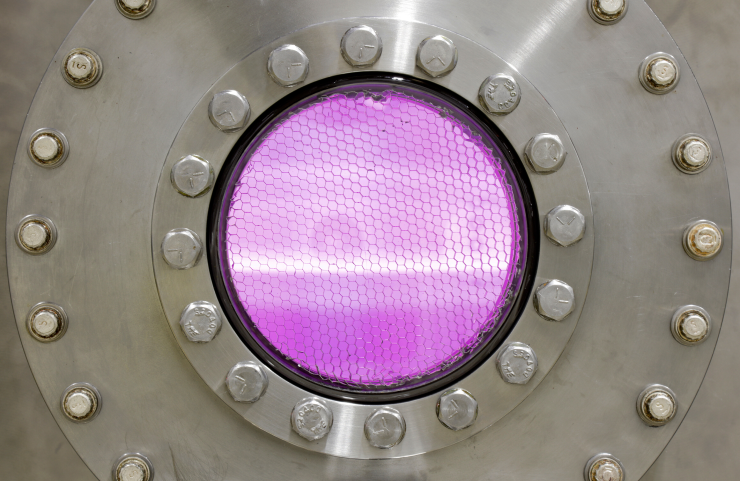 The National Academies decadal assessment of plasma science released last month describes funding and workforce instabilities that threaten the status of the U.S. as a world leader in the field. It recommends that federal science agencies increase their coordination, invest in university programs to maintain a “critical mass” of plasma science faculty, and support a broad range of research facilities.

Reflecting the broad reach of plasma science, the 18 month study was jointly sponsored by the Department of Energy, National Science Foundation, Office of Naval Research, and Air Force Office of Scientific Research. The study committee was chaired by Mark Kushner, a professor in the electrical engineering and computer science department at the University of Michigan, and Gary Zank, director of the Center for Space Plasma and Aeronomic Research at the University of Alabama.

The decadal assessment is one of an array of planning efforts recently undertaken by the U.S. plasma science community. The advisory committee for DOE’s Office of Fusion Energy Sciences intends to issue definitive recommendations later this year based on input received through the new assessment, a recently completed 15 month community planning exercise, and other studies, including a 2018 National Academies report that addressed DOE efforts in magnetic confinement fusion energy. The plasma science decadal was specifically instructed to not alter the recommendations of that report or the 2013 decadal strategy for solar and space physics sponsored by NASA and NSF.

Emphasizing the highly interdisciplinary nature of PSE, the report states that many beneficial applications of plasma technologies lie at the intersections of fields. While a variety of federal agencies support either fundamental plasma research or the development of plasma-based technologies, the report finds they often operate within isolated subdisciplines with limited interagency coordination. “The often highly mission-driven support of PSE also leads to fragmentation of the field, lack of an identifiable home agency, and a reduced ability to exploit interdisciplinary opportunities,” it states.

According to the report, some federal program managers have been cautious about participating in interdisciplinary programs that may be seen as duplicating the research efforts of other agencies, a practice that it notes has been “historically discouraged.” As an example of that attitude, the report points to plasma medicine and biotechnology as areas that have “fallen between the cracks” of agency missions, leading to potential missed opportunities in the fight against COVID-19, given their applicability to materials sterilization.

The report makes the case that the National Science Foundation’s Engineering Directorate is a natural home for the development of plasma applications, yet finds it has provided inconsistent support for PSE over the last decade. It recommends the directorate establish a plasma-focused program to advance engineering priorities in areas such as agriculture, energy and environment, chemical transformation, advanced manufacturing, electronics, and quantum systems.

At minimum, the report urges that the directorate consistently include PSE in its program descriptions and coordinate with fundamental plasma science programs within other NSF directorates and DOE. It also proposes that DOE rename its Office of Fusion Energy Sciences to reflect the fact that it supports plasma research distinct from the pursuit of energy generation.

More broadly, the report recommends establishing an interagency working group to coordinate efforts in fundamental plasma science and plasma science applications. A primary function of the group would be to identify possibilities for joint research initiatives that would provide new funding opportunities. The report points to the NSF/DOE Partnership in Basic Plasma Science and Engineering as an example of an effective interagency coordination mechanism and identifies more than 20 areas that are ripe for new collaborations between agencies.

The report also identifies significant workforce challenges facing the field, arguing that “poor PSE demographics and current hiring practices are eroding the ability of the field to meet national priorities, from security to the economy.”

The report suggests that the multidisciplinary nature of PSE has made it difficult for it to find footholds in academia, as plasma science researchers are often spread across several university departments. It states,

A multidisciplinary approach has been at the heart of the success of the field of plasma science, while simultaneously working against its long-term vitality in academia. Plasma physics is a minority discipline in nearly every university department containing plasma-focused faculty while many physics departments contain no plasma physics faculty.

It warns this lack of a “critical mass” of faculty within individual universities has serious consequences to the long-term health of the field, given the role universities play in training the future PSE workforce. This concern is compounded by the fact that the U.S. plasma science workforce is “rapidly aging,” with many faculty set to retire within the next decade and few junior faculty to take their place.

While concerning, the need for workforce renewal also presents an opportunity to address a severe lack of diversity within the field, the report observes. It laments that PSE is one of the least diverse STEM fields, with only 14% of PhDs awarded between 2013 and 2017 going to women and only 3% to Hispanic or Black students. The report states increasing diversity should be a high priority for the field and encourages community leaders to assess diversity, equity, and inclusion practices within their organizations.

Among suggested actions for developing a PSE workforce that is more reflective of broader society, the report recommends creating new undergraduate research opportunities to increase awareness of plasma science that are aimed especially at institutions that primarily teach undergraduates and are more likely to serve underrepresented groups. It also proposes restoring funding for education programs and research fellowships that were recently eliminated, such as DOE’s Fusion Energy Sciences Graduate Fellowship Program and National Undergraduate Fellowship Program in Fusion.

It urges federal agencies with core missions in plasma science to provide robust support for the continued development, upgrading, and operation of facilities at all scales. Midscale facilities costing between $1 million and $40 million are highlighted as offering distinct leadership opportunities for university researchers.

The report suggests that other subdisciplines in PSE may benefit from the LaserNetUS model, which provides institutions and researchers with access to a network of mid-scale high-intensity laser facilities, promoting collaboration and training. The pulsed power community has already embraced this model and held a “ZNetUS” workshop in January, which discussed the need for a U.S.-based mid-scale user facility, among other topics. The report notes that “the current paucity of mid-scale pulsed power facilities is a potential danger for the field.”

The report includes specific suggestions for new facilities by subfield. For example, it recommends that DOE build on its Low Temperature Plasma Science Center Program by establishing a similar crossagency program to support multidisciplinary research in emerging application areas. It suggests a potential minimum funding level of $20 million over 5 to 10 years for each topical initiative.

In other subdisciplines, the report echoes findings of recent National Academies studies, such as its report on high-intensity ultrafast lasers that led to the establishment of LaserNetUS and called for a national strategy to build new classes of lasers to reach currently inaccessible parameter regimes.