US Looks to Probe Limits of Earth System Predictability

The U.S. is developing a national strategy for Earth system predictability research that will focus on ways to better understand the practical limits of predictions and increase their usefulness for decision-makers. 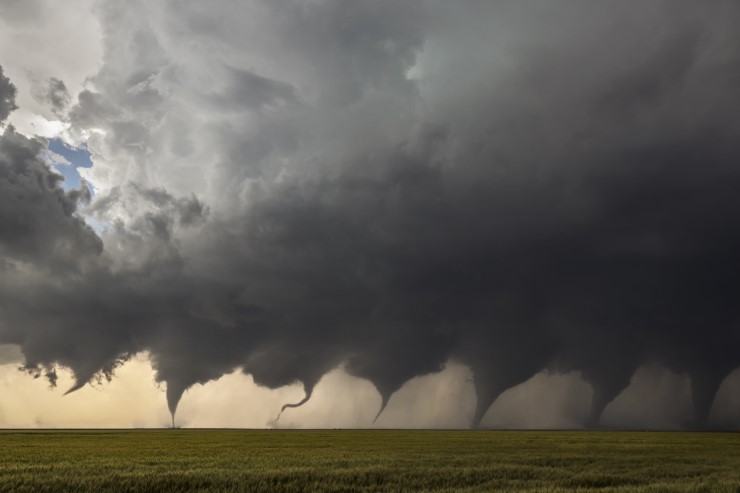 A composite of eight photos depicting the formation of a tornado.

This month, the National Academies hosted a workshop to assess how federal agencies can help scientists explore the limits of Earth system predictability. The proceedings will inform the work of a “fast track action committee” of federal agency representatives tasked with developing a national R&D strategy on the subject.

The effort stems from the White House’s latest R&D budget priorities memorandum, which directs agencies to prioritize activities that “quantify Earth system predictability across multiple phenomena, time, and space scales,” as well as to evaluate “how measures of and limits to predictability, both theoretical and actual, can inform a wide array of stakeholders.”

Addressing the workshop, White House Office of Science and Technology Policy Director Kelvin Droegemeier said the committee is looking to finish the strategy before the end of the current presidential term, acknowledging that schedule might entail sacrificing some formality. “We don't want to spend a lot of time writing a document, we could even do this in PowerPoint slides. The key thing is to actually get going and begin doing important work,” he said.

At the workshop, Droegemeier emphasized the distinction between the act of predicting a phenomenon and research on the predictability of that phenomenon, defining predictability as “a measure of whether, and to what extent, an event or behavior of a system is practically predictable.”

Drawing on his background as a severe storms researcher, Droegemeier pointed to the foundational 1963 paper by mathematician Edward Lorenz that demonstrated how turbulent flow in the atmosphere creates inherent limits on the lead time of weather forecasts. He explained, “The practical day-to-day weather is really, fundamentally not predictable for more than a couple of weeks because of the nonlinear growth of errors and uncertainties that you'll never be able to get rid of in initial conditions [of forecast models].”

Observing that while meteorologists were able to make weather predictions before having a theoretical framework for atmosphere predictability, he said Lorenz’s work offered an important bound that shaped the direction of later research.

Droegemeier noted that in his own research career he sought to push the limits of severe storm forecasts through the Center for the Analysis and Prediction of Storms he co-founded at the University of Oklahoma in 1989. “Lorenz thought that things like thunderstorms were not predictable for more than maybe 15 minutes, but there were maybe some aspects of storms like rotation, which was a stabilizing effect, that we thought might have greater predictability,” he said.

More generally, Droegemeier said that although the R&D priorities memo focuses on Earth system predictability, understanding the practical limits of predictability is important in a broad range of disciplines, such as modeling the spread of invasive species or infectious diseases, citing recent work on the fundamental limits of disease outbreak prediction and noting its relevance to the current coronavirus pandemic.

The final session of the workshop focused on the practical challenge of coordinating across multiple agencies and stakeholder groups to develop a new national framework for Earth system predictability research.

“At present, we probably do have this sort of collaborative system of systems. You could call it our Earth System Prediction System 1.0. And it has developed over the last 50 years in a somewhat ad hoc and opportunistic manner,” Waliser said. “And so, would there be value in stepping back and architecting a hypothetical system? What would it look like, designing from scratch?” he asked, suggesting that even a sketch of an idealized system could help identify research priorities.

Paula Bontempi, the incoming dean of the University of Rhode Island Graduate School of Oceanography, commented on the related problem posed by the “compartmentalization” of Earth science disciplines, saying that as a biologist she laments how the Earth system is often only associated with matters of weather and climate. She said one approach to bringing more disciplines to bear on questions of predictability would be to craft carefully worded funding solicitations that create opportunities for different teams of scientists to work together, adding that ideally such efforts would receive new money rather than siphoning resources from other research activities.

Waleed Abdalati, director of the Cooperative Institute for Research in Environmental Sciences at the University of Colorado Boulder, spoke to the challenge of getting individual agencies to work toward a common goal, especially in times of constrained budgets.

“The way budgets are done now, the way agency directives and mandates are structured, we're in a situation where we're never really getting past the sum-of-the-parts approach as opposed to the whole,” he said. “I feel like agencies really need to be empowered to surrender some of that narrower focus in the interest of prioritizing a collective objective. They need to be liberated to do more than just play in the sandbox together. They need to build the sandbox together.”

Abdalati continued that absent new resources, agencies may be forced to prioritize external, interagency activities over internal capabilities. He pointed to the latest Earth science decadal survey, which he co-chaired, as an example of a prioritization exercise in which participants were able to leave their discipline-specific interests aside to develop a holistic strategy.

In a similar vein, University of Washington atmospheric scientist Chris Bretherton argued that “conflicting U.S. agency priorities” are one of the main challenges to improving the Earth system research program. As an example, he suggested the proliferation of competing modeling systems in the U.S. is attributable to the desire of various funding agencies to maintain their own capabilities. Bretherton also advocated for developing shared, concrete research objectives. “We can't just be thinking we're going to improve our understanding of prediction and predictability in the Earth system. We can't have kitchen sink goals,” he said.

He continued, “It’s much better to have goals like dynamical [El Niño Southern Oscillation] forecasts, or projecting the adaptability and resilience of coral reefs over the next 50 years, or making probability maps that land will be inundated by a 30 year flood before 2050. Those kinds of things are very interdisciplinary tasks that naturally bring communities together.”