Astronomers Elaborate on Options to Reduce Impact of Satellite Megaconstellations

New reports explore technical and policy actions to mitigate the impacts of light pollution from planned satellite megaconstellations, which threaten to severely interfere with ground-based astronomical observations and cause other environmental and cultural harms. 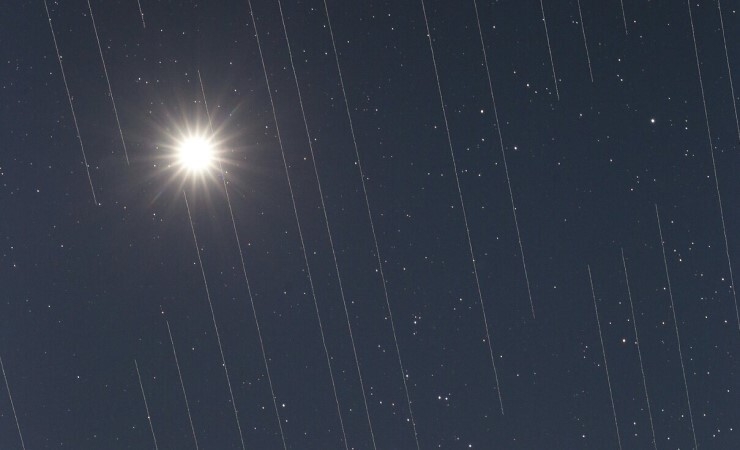 Satellite constellation tracks captured in a photo of Venus.

The American Astronomical Society and the National Science Foundation’s NOIRLab released a set of reports on Oct. 29 that flesh out policy options for reducing light pollution from planned satellite “megaconstellations,” which threaten to undermine the viability of ground-based observatories. The reports were produced by four working groups assembled through the organizations’ SATCON2 workshop this summer, which convened astronomers, satellite operators, and other stakeholders. (AAS is an AIP Member Society.)

Together, the reports present frameworks for enhancing oversight of commercial satellites, with one working group arguing that constellations should be subject to formal environmental impact reviews. They also stress the importance of continued collaboration between astronomers and the satellite industry as well as engagement with Indigenous groups and others who have not typically been consulted in such discussions.

To facilitate future work on the matter, which the authors estimate will require “many person-years and millions of dollars,” they also call for organizational structures with dedicated staff and access to legal counsel. An executive summary of the reports explains, “Thus far, interactions between astronomy and industry on the satellite constellations issue have been carried out pro bono in the ‘spare time’ of individuals. While this has been adequate initially, it is not sustainable as new issues are identified and more operators begin developing and launching satellites.”

Reports from working groups on “observations” and “algorithms” discuss ways to implement recommendations from the first SATCON workshop, which called for coordinated efforts to characterize satellite constellations, track their locations, and develop software applications that help subtract satellite trails from observations.

Arguing that satellite observing campaigns to date have been “poorly funded and do not scale effectively,” the observations group proposes creating a “SatHub” that would serve as a “one-stop shop” for data on satellite properties and orbits, software tools, and training resources. An Orbital Solutions Portal within the hub would allow satellite operators to provide data on positions in a standardized format at a recommended eight-hour cadence.

The group envisions SatHub as a global endeavor that could potentially be coordinated through the International Astronomical Union’s planned Center for the Protection of the Dark and Quiet Sky from Satellite Constellation Interference. IAU approved the creation of the center in April and expects to select a host institution for it this month.

The group anticipates funding for the hub could come from federal agencies such as NSF and NASA, international partners, and satellite operators, among others. It “strongly” suggests that satellite operators fund the Orbital Solution Portal, “as having access to a wealth of data products and a means to request coordinated observations from astronomers will directly benefit industry partners.”

More broadly, the group stresses, “The implementation steps in this report require significant overall resources on as fast a timescale as possible. It is one thing to write down what must be done, and it is another to secure funding and direct appropriately skilled individuals to carry it out.”

The remaining two working groups addressed issues beyond the scope of the first SATCON workshop, examining existing state, federal, and international policies, and consulting with a broad range of stakeholders to inform proposals for new regulatory frameworks. The "policy" group included several representatives from satellite companies, while the "community engagement" group considered perspectives of amateur astronomers and dark sky enthusiasts, environmental organizations, and Indigenous communities, among others.

The community engagement group makes the case for space to be formally defined as part of the environment under federal and international law. It notes that there are a wide variety of environmental impacts associated with the launch, operation, and deorbit of satellites, including emissions of greenhouse gases and chemicals, contamination from debris, and potential disruption to animal migration patterns

In addition, the group frames the night sky as a natural resource that belongs to and affects the wellbeing of all people. As such, it argues policymakers and satellite operators have a duty to consult impacted stakeholders, especially Indigenous communities and others who have “historically been excluded from the power structure and decision-making regarding space activity,” stating that “many communities see the unchecked actions of space actors as colonization expanded to a cosmic scale during a time of global crisis.”

The group further observes that the U.S. is a signatory to the Outer Space Treaty, a binding agreement that establishes space as a “global commons,” and it suggests satellite operators have a "duty to consult" affected nations and persons. Turning to U.S.-specific legal frameworks, the group also argues that satellite constellations should be subject to review under the National Environmental Policy Act (NEPA), which requires agencies to assess the environmental impacts of certain activities that require their approval.

Currently, the Federal Communications Commission, which licenses satellite constellations, requires environmental impact statements under NEPA only under limited circumstances which do not apply to satellites in orbit. By contrast, the Federal Aviation Administration applies NEPA more broadly and regards light pollution as a trigger for NEPA review.

The policy working group’s report likewise explores the option of expanding application of NEPA, and notes there was dissent within the group on the matter. For instance, it states, “Some authors of this paper pointed out that requiring [environmental reviews] for satellite licensing in the U.S. could result in satellite operators abandoning the U.S. licensing system. In counterpoint, access to the U.S. market is likely to be viewed as attractive.”

The report presents ways of amending regulations to require environmental reviews, such as by defining the natural environment to explicitly include “Earth’s orbital space,” while also noting objections to that approach. “The concern was raised that this change will upend U.S. policy distinguishing between the Earth environment and the space environment with unpredictable consequences,” it states.

The idea of expanding NEPA to encompass satellite constellations has attracted some attention in Congress, where earlier this year Sens. Tammy Duckworth (D-IL) and Brian Schatz (D-HI) asked the Government Accountability Office to review the subject.

“Although we are enthusiastic about the increased broadband access these satellite constellations might enable, astronomers are concerned that launching thousands of bright satellites into space, as the FCC has approved doing, will interfere with their scientific research,” they wrote, suggesting that FCC’s decision to generally exempt satellite systems from NEPA reviews should be revisited.

At a recent National Academies event, the SATCON2 workshop organizers noted that they briefed the White House Office of Science and Technology Policy on their reports on Oct. 19, including the proposal for the FCC to require environmental reviews. The community engagement group leaders also noted they recommended to OSTP that the U.S. should reaffirm its commitment to the Outer Space Treaty’s principle of space as a global commons and that NASA should establish an Office of Indigenous Affairs. AAS plans to continue promoting the SATCON2 reports through additional agency and congressional briefings as well as at townhall sessions at scientific conferences.