Amid President Biden’s government-wide focus on climate change, lawmakers are again considering the merits of creating a federal “climate service” to help the public better access and understand the various climate information products produced across agencies. 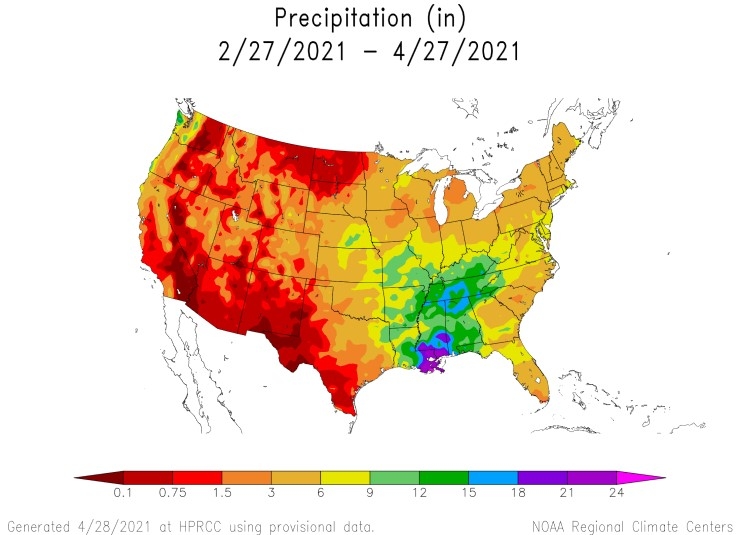 Map showing precipitation in inches for the last 60 days over the continental U.S.

A longstanding concept for centralizing the dissemination of climate-related risk information is seeing renewed attention from lawmakers as President Biden pushes to vastly expand federal climate research and mitigation initiatives.

Last week, the House Science Committee held a hearing to examine the “case for a federal climate service,” which would aim to better coordinate climate data and forecast products from across agencies. While neither the committee nor the Biden administration has advanced any proposal along such lines, in previous administrations the National Oceanic and Atmospheric Administration has backed the idea of establishing a “National Climate Service” akin to its National Weather Service.

Republicans at the hearing revived arguments that such an effort would risk duplicating existing activities.

Environment Subcommittee Chair Mikie Sherrill (D-NJ) opened the hearing by noting the idea behind it was to begin a dialogue about “what a system of federal climate services should look like and how it can best serve communities on the front lines of this [climate] crisis.” She expressed particular concern over the potential for growing inequities in access to climate and weather data if the private sector takes too large a role, saying that “not all communities can hire consultants or a climate services firm to help them incorporate climate risk into their resilience planning.”

“While the private sector is a critical partner, it cannot replace an authoritative, accessible baseline of federal science and climate services,” she remarked.

Sherrill also highlighted two new bills she has introduced, the PRECIP Act and the FLOODS Act, which aim to improve understanding and communication of flood risks, saying they are “just one piece of the puzzle when it comes to improving authoritative and actionable federal tools and technical assistance for climate adaptation.”

Committee Chair Eddie Bernice Johnson (D-TX) did not attend the hearing but in a written statement said that existing federal climate information products are “fragmented” across agencies such as NOAA, the Department of Agriculture, and the U.S. Geological Survey, “making it hard for communities to know where to turn when it comes time to make decisions.” She did not specifically call for a centralized information source but emphasized there is a “clear need for coordination” across federal efforts.

Committee Ranking Member Frank Lucas (R-OK) warned against establishing a new, centralized mechanism, saying that NOAA already functions as a “climate service” through activities such as its Regional Integrated Sciences and Assessments program and Regional Climate Centers. He suggested the “best way” to improve the provision of climate information to the public is by expanding partnerships with the private sector and academic institutions.

Environment Subcommittee Ranking Member Stephanie Bice (R-OK) similarly argued Congress should “focus on what information and data localities need, not just increasing bureaucracy with another government agency or service.” She added, “Through federal-led partnerships with academics, states, private industry, we can identify what information is most needed and then work to provide it in a cost-effective, resourceful way.”

Among the witnesses testifying at the hearing was climate scientist Richard Moss, who directed the U.S. Global Change Research Program (USGCRP) during the presidencies of George H. W. Bush and Bill Clinton. Citing his experience working with state agencies seeking climate information, Moss observed that “there is a lot of confusion among users about where to turn.”

He advocated for developing a “more unified federal effort that doesn't replace or try to set up a single source for all information, but that serves as a point of contact and helps direct people to the appropriate information.” However, he said that the research community currently does not have enough resources to “do the kind of customization that we need to make the data relevant at local levels.”

“You can get data on temperature, precipitation, but what does it actually mean for how you might have to change your cropping cycles? Or where things are beginning to flood?” he said.

Rep. Suzanne Bonamici (D-OR) noted that Democrats on the House Climate Crisis Committee have proposed that Congress create a “Climate Risk Information Service” that would continuously provide information tailored to local and regional decision-makers to supplement the current quadrennial cycle of the National Climate Assessment (NCA). She also asked Moss whether USGCRP, which produces the NCA, is the best entity to lead a federal climate service.

Moss replied, “I think you will have to act to establish some kind of a new authority that has sufficient resources and clout to work better across the agencies,” noting that USGCRP is not focused on operationalizing the research it produces. “USGCRP agencies feel that they're research agencies, and so I think that we really need much more on the operations side in order to do this kind of locally relevant synthesis and application,” he explained.

“It's not just enough to have a well-researched report and then put it on the shelf and hope somebody comes and finds it to read. We need to have developed reports that are based on the priorities that exist in communities, and then bring climate information into those priorities in a way that becomes meaningful for them and engages the communities, from the research, to the release, to the implementation of action that follows,” she said.

NOAA first formally proposed creating a National Climate Service at the end of the George W. Bush administration, when the head of the agency, Conrad Lautenbacher, advanced the idea with White House support.

President Biden’s newly announced pick to lead NOAA, Richard Spinrad, worked to develop the concept during that era, when he was head of the agency’s main research office. Spinrad told Science magazine in 2009 that a National Climate Service would warrant a budget at least as large as the National Weather Service.

“The diversity of products and services is apt to be broader for an NCS,” he said.

Meanwhile, in 2007, then-Sen. John Kerry (D-MA), who is now leading President Biden’s international negotiations on climate, introduced legislation that included a provision to establish such a service at NOAA, but it never received a floor vote.

The climate service concept gained momentum at the outset of the Obama administration with the support of the House Science Committee, which advanced a bill sponsored by Committee Chair Bart Gordon (D-TN). The version that emerged from the committee would have created a “Climate Service Program” at NOAA as well as an “interagency research and operational program” for climate information. However, committee Republicans expressed reservations about the bill, and it was eventually attached to the Waxman-Markey climate legislation, which stalled in the Senate.

Subsequently, in 2011 NOAA Administrator Jane Lubchenco proposed reorganizing the agency’s budget structure to include a “Climate Service Line Office” as an initial, cost-free step to coordinate relevant programs. Republicans, who had since gained control of the House, blocked the proposal through Congress’ appropriations legislation, partially on the grounds that it could disrupt the agency’s fundamental research programs.

Now, though, the climate service idea has returned in certain corners of Congress after lying dormant for the past decade. For instance, outside the House Science Committee, the top Republican appropriator for NOAA, Rep. Robert Aderholt (R-AL), asked specifically about the concept in a separate hearing this month, though he did not indicate if he is for or against the idea.

Lubchenco, who is now leading OSTP’s climate and environment portfolio, said she is “delighted” in the renewed congressional interest in the subject, responding to an audience question at the American Meteorological Society’s Washington Forum this week. Lubchenco said the Biden administration has not taken a position on the climate service concept, but called it a “really important idea that needs to be explored.”

“I think that there will be ample opportunity for us to consider the best ways to deliver the kind of integrated services that are needed across the agencies,” she added.