The National Institute of Standards and Technology’s budget would rise by nearly 50% under President Biden’s fiscal year 2022 request, with across-the-board increases proposed for the agency’s research and advanced manufacturing programs.

In its fiscal year 2022 budget request, the Biden administration proposes to increase the National Institute of Standards and Technology’s topline by 45% to just under $1.5 billion, which is among the highest percentage increases sought across all science agencies.

Summary figures from the request are available in FYI’s Federal Science Budget Tracker and highlights are summarized below. 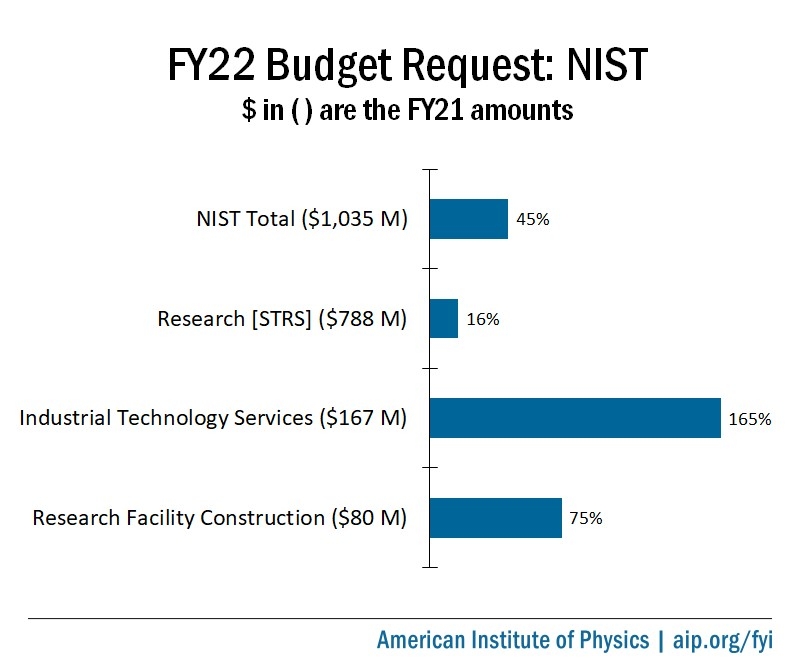 NIST’s laboratory programs are funded through the Scientific and Technical Research and Services account, which would increase by $128 million to $916 million under the request. Much of the additional funding would go to “four strategic focus areas” that NIST states it plans to prioritize in the coming decades: quantum science, artificial intelligence, engineering biology, and the Internet of Things. It would also support expanded work on microelectronics, advanced communications, and climate change science, among other areas.

Quantum information science. NIST proposes to increase funding for its Quantum Information Science, Engineering, and Metrology program by $15 million to $62 million. The program currently supports NIST’s Quantum Economic Development Consortium and a “grand challenge” initiative to develop quantum networking capabilities, among other activities. Of the total increase, $9.5 million would go toward expanding testbeds for quantum networks to address a “lack of quantum engineering capabilities for U.S. researchers to more rapidly create, test, and validate potential platforms.” The remainder would go toward expanding the NIST-on-a-Chip program and work in foundational quantum science and metrology. 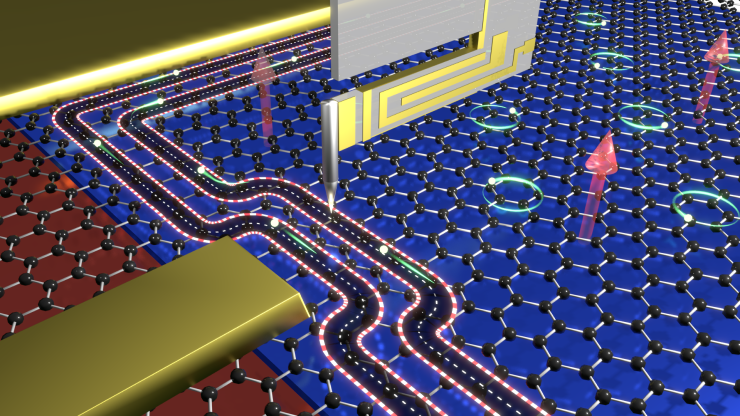 Artificial intelligence. The budget for NIST’s program on “Partnerships, Research, and Standards to Advance Trustworthy Artificial Intelligence” would increase $15 million to $45 million under the request. Of the increase, $10 million would support the creation of a cross-sector institute that would help develop standards for trustworthy AI systems, in support of NIST’s Plan for Federal Engagement in Developing Technical Standards and Related Tools. The remaining $5 million would go toward expanding NIST’s research on particular application areas, including “resilient communications, smart manufacturing and robotics, building and energy controls management, and advanced materials discovery and design.” The agency also proposes to create a “national materials data network” in collaboration with the NIST-supported Center for Hierarchical Materials Design at Northwestern University.

Engineering biology. The budget for NIST’s program focused on supporting the “bioeconomy” would increase $14 million to $34 million. NIST states the funding would primarily go toward “developing capabilities for engineering biology, advancing biomanufacturing processes and technologies, and merging artificial intelligence with biological data to create new measurement technologies.” It also notes the program would help develop “rapid detection methods for infectious diseases and evaluation of vaccines and therapeutics that may reduce viral spread,” as well as “mitigate increased biosecurity risks posed by dual-use and emerging biotechnologies.”

Semiconductor research. NIST proposes to increase funding for next-generation semiconductor research and standards by $10 million to $35 million in order to modernize equipment at its campuses in Maryland and Colorado and create a research program focused on characterizing “physical properties of complex material and processing interactions at the nanoscale.”

Climate and environmental research. The budget for NIST’s Climate and Energy Measurements, Tools and Testbeds program would increase $18 million to $55 million under the request. Of the increase, $7.5 million is for development of climate-resilient building codes and standards, $5 million is for carbon capture and sequestration research, and $3.7 million is for smart grid research. The remainder is for greenhouse gas measurements and standards, enabling NIST to expand its Urban Dome emissions monitoring program to include more locations and accelerate development of models that offer emissions information “at scales useful for city and state-level mitigation efforts.” Through a separate program, NIST also proposes a $5 million increase for a “circular economy” initiative that aims to improve the recyclability of plastic materials.

Advanced communications. The budget for advanced communications research and standards-setting would increase by $12 million to $36 million under the request, supporting R&D to inform spectrum auctions for 5G systems and to lay the groundwork for “6G and beyond,” among other purposes. NIST states the work would “enhance U.S. influence in appropriate international standards development organizations” and enable the agency to “enhance its fierce advocacy efforts for U.S. industry in stakeholder groups related to supply chain innovation.” NIST also proposes to concentrate its advanced communications R&D efforts by transferring relevant research groups from across its laboratories into the Communications Technology Laboratory. It states the move would not result in any staffing or budget changes.

User Facilities. NIST requests a $5 million increase to $60 million for the operations of its two user facilities: the Center for Nanoscale Science and Technology, which supports the fabrication and characterization of nanoscale materials and devices, and the Center for Neutron Research, a nuclear reactor facility for neutron-scattering research. The Center for Neutron Research is currently shut down due to a radiation incident in February, which NIST indicates was apparently caused by operator error. The budget request does not mention the situation.

Diversity and inclusion. In support of President Biden’s executive order, “Advancing Racial Equity and Support for Underserved Communities Through the Federal Government,” NIST requests $3 million to create an educational partnership program with minority-serving institutions and $2 million to create a program that would recruit postdoctoral researchers from underserved backgrounds to work in its laboratories. NIST states, “Students in underserved groups have been found to innovate at higher rates, but their novel contributions are often discounted, and diverse and inclusive workplaces are better at retaining talent and are more innovative and productive.”

NIST proposes increasing its facilities budget by 75% to $140 million, all of which would be allocated to repairing existing facilities. NIST notes it faces a large maintenance backlog and several urgent repair needs, describing recent water and electrical infrastructure failures at its campus in Maryland.

NIST does not request any funds for ongoing renovations to the main building on its Colorado campus, which it estimates will take $150 million to complete. In recent years, NIST sought to fund the project through a special capital account administered by the General Services Administration, but Congress did not accept the proposal.

The budget for the Industrial Technology Services account would nearly triple under the request to $442 million, which would be split between NIST’s two manufacturing programs.

Under the budget request, the Manufacturing USA program budget would increase by $150 million to $167 million to create two new institutes. NIST currently supports one of the 16 institutes in the national network. The agency states such institutes “bridge a key market failure in the U.S. innovation ecosystem, which is even more pronounced in advanced manufacturing.” One of the new institutes would be dedicated to semiconductor design and manufacturing and the request does not specify the focus of the other.

Manufacturing is a major focal point of the Biden administration’s economic policy, particularly in its multiyear American Jobs Plan, which proposes that Congress quadruple the Manufacturing Extension Partnership’s budget, “increasing the involvement of minority-owned and rurally located small-and-medium-sized enterprises in technological advancement.”