Locascio Nominated to Return to NIST as Director

President Biden has nominated bioengineer Laurie Locascio to lead the National Institute of Standards and Technology. Locascio was a longtime employee of the agency who rose through the ranks to oversee all laboratory programs across its campuses in Maryland and Colorado. 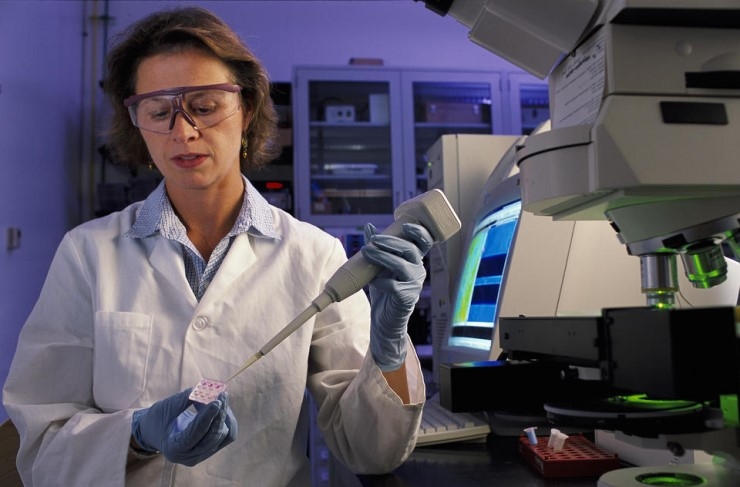 Laurie Locascio working in a research lab at the National Institute of Standards and Technology.

President Biden announced on July 16 that he is nominating Laurie Locascio to be director of the National Institute of Standards and Technology, a $1 billion agency within the Commerce Department. Locascio spent most of her career at NIST, joining as a bioengineering researcher in 1986 and ultimately taking on a series of senior leadership roles before leaving the agency in 2017. Since then, she has been vice president for research at the Baltimore and College Park campuses of the University of Maryland.

Pending her confirmation by the Senate, Locascio will return to the agency at a moment when its responsibilities are expanding and lawmakers are proposing it play a substantial role in national innovation initiatives currently under consideration in Congress. The Biden administration is likewise taking a significant interest in NIST, proposing to expand its budget by 45% in the next fiscal year.

To stay up to date on nominations to key science positions across the government, consult FYI’s Federal Science Leadership Tracker.

Locascio has deep roots in NIST and Maryland region

In an interview in 2015, Locascio said she first became interested in a scientific career through the encouragement of her father, physicist Edward Locascio. She studied chemistry at James Madison University, earning her bachelor’s degree in 1983, and then turned to bioengineering, earning a master’s degree in the subject from the University of Utah in 1986. After that, she joined the research staff at NIST and remained with the agency for three decades.

She recalled in the interview that she came to realize she would need a doctorate to become a top researcher and that her division chief Willie May, who later became NIST director, encouraged her to obtain one. Enabled by NIST to pursue work in toxicology full time at the University of Maryland, Baltimore, she completed her studies in 1999 and went on to take several leadership roles within the agency.

Locascio became chief of the Biochemical Science Division in NIST’s Material Measurement Laboratory in 2006 and was named the laboratory’s director in 2012. The lab is one of the agency’s largest, with about 1,000 research staff members, and undertakes work in precision medicine, data and informatics, biologic and cellular therapeutics, environmental science, and the Materials Genome Initiative. As head of the lab, Locascio helped establish the joint Institute for Bioscience and Biotechnology Research with the University of Maryland.

Shortly before leaving NIST in 2017, Locascio became the agency’s associate director for laboratory programs in an acting capacity, overseeing the activities of all five NIST labs across its campuses in Maryland and Colorado. She also kicked off development of a congressionally mandated long-term strategic plan for NIST’s laboratories, its first such plan since 1981.

After joining the University of Maryland in the fall of 2017, Locascio oversaw the mergers of the research enterprises at the university’s College Park and Baltimore campuses, which together have more than $1 billion in R&D expenditures. Locascio has also managed efforts to forge new partnerships between academic researchers, technology companies, federal agencies, and nonprofit foundations, including the building up of a new research district.

In an interview this May, Locascio drew parallels between her management of work across different campuses at the university and NIST, saying, “We really look to elevate and amply the things that each campus can be known for separately, but also what they can be known for together.”

In her role at the University of Maryland, Locascio has also highlighted the value of partnerships involving NIST specifically. At a 2019 White House roundtable on the National Quantum Initiative, she pointed to the success of the NIST/UMD Joint Quantum Institute to illustrate the benefits of co-locating research infrastructure.

Mentorship key to Locascio’s success as a women in STEM

Locascio is in line to be the second woman to be a Senate-confirmed NIST director, and the first since Arati Prabhakar stepped aside from the role in 1997. She has remarked on several occasions about her experiences as a woman at the agency and credited Willie May as a mentor, saying, “[He] believed in me and encouraged me to take leadership opportunities throughout my career even though there were few female leaders around me.” She has also said that he and others in the agency gave her the flexibility to pursue her work and her doctorate while balancing family responsibilities.

However, in 2017 she noted in a blog post on the agency’s website that she had also experienced a hostile atmosphere at times during her research career. She recalled an incident in her 30s when she was at her first committee meeting of senior researchers and was repeatedly cut off from speaking by a man who was a “leading researcher from a prominent U.S. university.” After noting how she finally interjected with her idea, she recounted, “At that point, he turned to me and said, ‘Wow, that was a good idea. Now, who are you, little girl?’” She wrote that the comment was “cutting and demoralizing,” and that while attitudes toward women have changed since then it continued to be common for her to be the only woman in a meeting.

She went on, “I wish I had good insight into how to increase the number of women scientists and leaders of scientific organizations. I do everything I can to encourage women already working in science, including mentoring some very talented women at NIST. We have some tremendous women here whom I hope will rise to leadership positions, and maybe even take my job someday.”

Shortly afterward, Locascio was asked about the post and what could be done to increase the diversity of researchers when she testified at a House Science Committee hearing on materials science. She replied it is important to find ways to recruit, retain, and elevate women and other underrepresented groups.

“That’s something that I have really thought a lot about, how do we make sure that no matter what you look like, where you come from, what your cultural background is, we need you at the table in order to get the best people and the best ideas out there and supported for the sake of science in the United States,” she added.

A time of opportunity and strain for NIST

Locascio is poised to lead NIST during a potentially transformative period for the agency. The Biden administration has proposed to vastly expand its advanced manufacturing programs, with a focus on microelectronics and supply chain security. It has also proposed large boosts for the agency’s research programs, with an emphasis on quantum science, artificial intelligence, climate research, bioengineering, and advanced communications, among other areas.

Meanwhile, the Senate-passed U.S. Innovation and Competition Act contains a provision that would provide NIST with billions in direct appropriations for microelectronics R&D if enacted in its current form, and the House Science Committee introduced the NIST for the Future Act yesterday, which would recommend Congress increase the agency’s budget to nearly $1.6 billion by fiscal year 2026, largely to expand its research programs.

At the same time, NIST has been strained in recent years by increasing responsibilities in certain areas, particularly cybersecurity, and by its large facilities maintenance backlog. The agency has detailed several urgent repair needs in its recent budget requests, recounting water and electrical infrastructure failures at its campus in Maryland.

NIST’s primary advisory committee also published a report this year that argues the agency’s programs are “stretched too thin” and stresses that its amount of deferred maintenance currently stands at more than $800 million.

“Without sustained and stable investment, NIST faces an increased probability, which will approach near certainty, of catastrophic infrastructure failure which will escalate overall operational costs, decrease efficiency and lower productivity of the research laboratories, and could endanger the health and life safety of the NIST staff,” the committee wrote.