The Department of Energy’s Nuclear Physics program is currently commissioning a major new user facility, ramping up work on a flagship particle collider, and mulling a multinational campaign to detect a hypothesized particle-decay process, all while facing widely diverging budget scenarios. 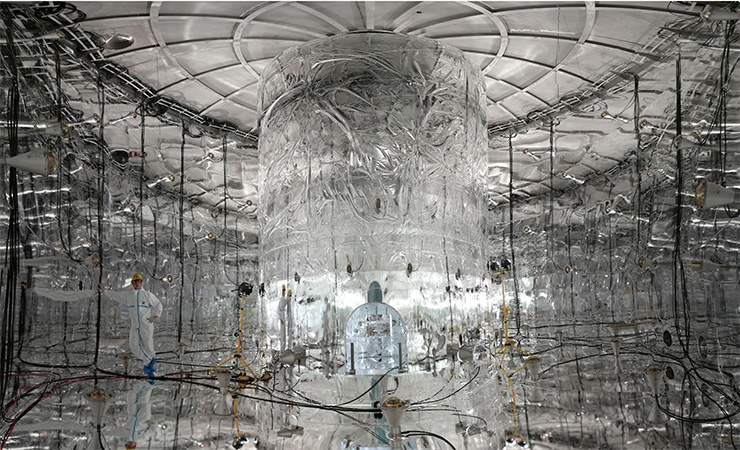 The interior of the Germanium Detector Array (GERDA) experiment at the Gran Sasso National Laboratory in Italy. The experiment was designed to detect a hypothesized neutrinoless double beta decay process and ultimately found no evidence for one.

The Department of Energy’s Nuclear Physics program is rounding a corner in 2022, with its new user facility, the Facility for Rare Isotope Beams (FRIB), set to open at Michigan State University on time and on budget. Meanwhile, preparations are continuing for construction of the program’s next flagship project, the Electron-Ion Collider, which is slated to get underway at Brookhaven National Lab in 2024.

Over the past year, the program has also been considering its approach toward another high priority: detecting the hypothesized neutrinoless double beta decay (NDBD), an exceptionally rare radioactive-decay process. Finding such a decay would be a major breakthrough because it is forbidden by physics’ Standard Model of particle interactions and would point toward answers to fundamental questions such as why matter is prevalent over antimatter in the universe.

So far, DOE has only provided token funding to new efforts to search for the decay, but at the latest meeting of the government’s Nuclear Science Advisory Committee (NSAC) in November, program head Tim Hallman said there is international interest in funding up to three NDBD experiments simultaneously. Those discussions are still preliminary, though, and Hallman also observed that strained budgets are threatening to leave even the program's current activities underfunded.

Describing the budget situation for Nuclear Physics, Hallman said that, while DOE requested a relatively large increase for the program, that increase would follow a year in which its budget shrank. He also noted that FRIB and the Electron-Ion Collider are placing increasing demands on program funding.

Hallman further pointed out that, although Senate appropriators proposed providing more funding for the program this year than DOE requested, their House counterparts proposed substantially less. Referring to that split, he remarked, “At the lower end of the possible range, it’s difficult to see how we would not have to have a reduction in scope or level of effort in order to make things fit.”

Congress has still not negotiated its fiscal year 2022 appropriations for the government and is keeping all agencies running at last year’s funding levels as a stopgap. Passing appropriations legislation will require the assent of at least 10 Republicans in the Senate, and some Republican lawmakers have suggested the stopgap could be extended for the entire fiscal year.

Hallman explained that, even under the requested budget, some areas would not be fully funded. In particular, he said funding for construction and equipment projects would only be “adequate to keep things at stay-alive levels, in some cases better than others.”

His slide presentation noted that the Electron-Ion Collider budget would stay about even at $30 million and that the project requires about $120 million to meet its last pre-construction milestone in early 2023. Given that gap, its schedule could “need to be stretched.”

Among smaller projects, the Gamma-Ray Tracking Array (GRETA) to be installed at FRIB would continue to be funded at beneath its planned level. Likewise, the Neutron Electric Dipole Moment experiment at Oak Ridge National Lab’s Spallation Neutron Source would be funded at “significantly” less than its planned level, potentially impacting its schedule.

Hallman reported that funding for facility operations and research at FRIB would be somewhat below their planned levels, though he also noted the facility was on track to begin science operations in February and would operate on a full schedule.

Nuclear Physics’ budget constraints could be relieved if Democrats succeed in passing their marquee Build Back Better Act legislation. Draft text that the Senate released in December, after Hallman’s presentation, includes $387 million for the program’s construction and equipment projects that the House did not include in the version of the bill it passed in November. However, the overall bill still lacks a clear path through the Senate.

Should the Build Back Better Act ultimately deliver funding for the Nuclear Physics program, it could benefit the search for the neutrinoless double beta decay. Although such a project would not be nearly as expensive as the Electron-Ion Collider, the decay is so rare that the next efforts to find it are expected to require a sizeable “ton-scale” detector that would still weigh heavily on the program’s budget.

NSAC’s 2015 Long-Range Plan for Nuclear Science envisioned that work on a ton-scale NDBD experiment would proceed as the construction of FRIB ramped down and that construction of the Electron-Ion Collider would then follow FRIB’s completion. As things have unfolded, though, the collider is moving ahead first.

Nevertheless, reporting on a summit on NDBD that convened in Italy in September, Hallman expressed enthusiasm about the prospects for an ambitious multinational effort. Explaining that even a ton-scale detector might not yield clear-cut evidence for the NDBD, he said that summit participants broadly agreed it would be desirable to have near-contemporaneous confirmation from independent experiments.

“That’s a pretty important conclusion that wasn’t obvious would be made going into this summit,” he said.

He related that participants from Italy and Canada were the “most outspoken” in favor of the idea and that the meeting also yielded support for exploring a more formal international collaboration.

Hallman said that a review the Nuclear Physics program conducted in July 2021 of potential ton-scale NDBD experiments focused on three promising candidates: CUPID, nEXO, and LEGEND-1000. He reported the estimated overall costs of those efforts are $64 million, $406 million, and $442 million, with DOE respectively covering 55%, 85%, and 60% of the total.

Observing that building all three projects would involve spending about $1 billion over 10 years, he said it would not be an “exceedingly outrageous” amount if several countries contribute. He also compared it to the much larger sums spent on experiments that require accelerators to produce the phenomena they study. He asserted,

The potential discovery of a neutrinoless double beta decay would be every bit as much of a game changer as the discovery of supersymmetry at CERN, and as compelling as any accelerator-based research currently underway.

Hallman also suggested that a formal collaboration would be well-positioned to support even larger follow-on efforts if they are needed.

New long-range plan on the horizon

The future direction of the Nuclear Physics program will be subject to guidance through NSAC’s next long-range plan, which Hallman said the program is considering initiating after its fiscal year 2022 budget is finalized.

To review the process through which NSAC produces the plan, the committee heard from Don Geesaman and John Wilkerson, who respectively chaired NSAC and the American Physical Society’s Division of Nuclear Physics (DNP) when the last plan was produced.

They reflected that the process lasted about a year and a half and involved a series of DNP-organized “town meetings” early on, followed by the submission of white papers to NSAC. The working group that assembled the report comprised about 60 members and was responsible for formulating its recommendations in view of different budget scenarios.

Geesaman contrasted the NSAC process with the “P5” process undertaken by the government’s High Energy Physics Advisory Panel in that NSAC focuses more on science priorities than specific projects. He argued that NSAC’s approach gives DOE and the National Science Foundation more flexibility around how to satisfy those priorities.

“The funding agencies have well-established procedures to evaluate the scientific value and cost and technical effectiveness of the projects. … NSAC has to trust that the agencies will move forward in a rational and optimized way, even under the constraints of budget challenges,” he said.