The two federal agencies that oversee users of the electromagnetic spectrum have pledged to improve their coordination after a series of high-profile disputes over spectrum allocation decisions. 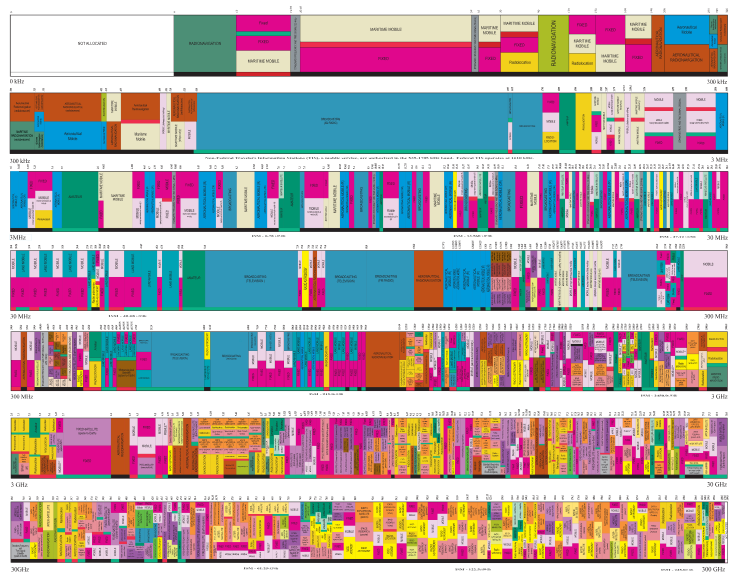 The Federal Communications Commission (FCC) and National Telecommunications and Information Administration (NTIA) launched an initiative last month aimed at improving coordination of spectrum management across the federal government. Over the last several years, federal agencies have become mired in a series of disputes over whether FCC’s opening of certain spectrum bands to telecommunications applications would interfere with other spectrum users, including weather satellite systems, the Global Positioning System, and, most recently, navigation equipment on commercial airliners.

These controversies have arisen in part due to the recent proliferation of spectrum uses, and because FCC focuses on promoting commercial uses of spectrum that are sometimes at odds with the interests of other users. NTIA, which represents federal users of spectrum, has publicly clashed with FCC over several of the commission’s reallocation decisions. To smooth these frictions, the two agencies have resolved to update their nearly two-decade-old memorandum of understanding, revamp technical collaboration among industries and agencies, and develop a national spectrum strategy.

The initiative’s announcement follows the arrivals of new leaders at each agency. Jessica Rosenworcel, a former Senate committee counsel, has been an FCC commissioner since 2012 and was confirmed as the agency’s chair in December. NTIA head Alan Davidson, a lawyer and internet policy expert, was confirmed in January.

Momentum has been gathering behind spectrum management reform for some time, attracting significant bipartisan attention from numerous congressional committees.

Two years ago, the Democratic and Republican leaders of the House Energy and Commerce Committee asked the Government Accountability Office to review federal spectrum management, complaining it had devolved into the use of “chaotic processes” in which federal agencies appeared to be circumventing NTIA. They also asserted that such poor coordination had weakened the U.S. position in international spectrum negotiations.

The resulting GAO report, released in January, outlines steps NTIA specifically could take to reform its processes for assessing spectrum interference risks and communicating them to FCC. Among its findings, the report suggests the agency “lacks a formalized planning process” for executing spectrum reallocations among users and does not do enough to address competency gaps across its highly skilled workforce. A separate study that GAO released last year in response to a bipartisan request from the House Science Committee found that there is no clear guidance on how FCC and NTIA should resolve disputes.

The inadequacy of the MOU between FCC and NTIA, which was last updated in 2003, has become a particular focus of attention. It outlines how, and how often, the agencies will share data, communicate users’ needs, and raise potential spectrum interference issues before allocation decisions are made. In January, Senate Commerce Committee Ranking Member Roger Wicker (R-MS) urged the agencies to update the MOU, suggesting it “does not appropriately account for the dramatic changes in technology in the past 20 years.”

In resolving to update the memorandum, FCC and NTIA state that they aim to “address gaps in government coordination and to better reflect today’s spectrum opportunities and challenges.” In addition, they state, “For the first time, the chair of the FCC and the [NTIA head] will hold formal, regular meetings, beginning monthly, to conduct joint spectrum planning.” They note that the current MOU requires the two officials to meet only twice each year. Further, they will collaborate in the development of a long-awaited national spectrum strategy.

In 2018, President Trump directed federal agencies to work through NTIA to develop a national spectrum strategy addressing topics such as ways to increase spectrum access and new approaches for sharing spectrum between users. That strategy was supposed to have been delivered within 270 days but never materialized, though the White House did release a separate report on the increasing demands for spectrum from emerging technologies deployed by non-federal users.

Another focus of the new FCC and NTIA initiative is to improve their technical ability to study spectrum interference. The agencies state they will “recommit to scientific integrity and evidence-based policymaking,” which will involve compiling “principles, guidelines, accepted technical standards, interference protection criteria, propagation models, and other characteristics” for spectrum engineering compatibility analysis.

In addition, FCC will now become an observer on the Department of Commerce’s Spectrum Management Advisory Committee, while NTIA will be an observer on FCC’s Technological Advisory Council and Communications Security, Reliability, and Interoperability Council.

Allocation disagreements coming to a head

In announcing the initiative, FCC Chair Rosenworcel remarked, “Now more than ever we need a whole-of-government approach to spectrum policy. Over the past few years we’ve seen the cost of not having one — and we need a non-stop effort to fix that.”

In January, the serial controversies surrounding spectrum allocation reached a new level of public visibility when a last-minute dispute broke out over whether the impending activation of 5G telecommunications networks would interfere with navigation equipment on airliners. Mitigation measures were ultimately agreed to, but not before the disruption of some air traffic.

At a hearing dedicated to the incident, House Transportation Committee Chair Peter DeFazio (D-OR) criticized the “extraordinary lack of communication and coordination between the FCC and the Federal Aviation Administration.”

That response echoed criticisms from both the House and Senate Armed Services Committees in 2020 after FCC approved the telecommunications company Ligado’s use of spectrum near bands used by GPS, prompting protests from the Department of Defense. The episode resulted in Congress using that year’s National Defense Authorization Act to increase pressure on Ligado to avoid generating any interference and to launch a National Academies study of the matter, which is currently in progress.

Meanwhile, the House Science Committee has been tracking threats that telecommunications equipment could present to meteorological and astronomical observation since 2019. Much of that threat relates to the possibility that even relatively weak signals could contaminate passive observations of faint electromagnetic emissions from sources such as atmospheric water or distant stars.

Scientific stakeholders have also identified additional concerns. For instance, the American Meteorological Society joined others in the “weather and water enterprise” in warning the House Agriculture Committee in 2020 that FCC’s Ligado decision could interfere with satellite-based technologies used for applications such as precision agriculture. AMS and an even larger coalition wrote to FCC and NTIA in January 2021 asking for a stay of the Ligado decision in view of the pending National Academies review. (AMS is an AIP Member Society.)

In November, leaders of the Science Committee recommended the President’s Council of Advisors on Science and Technology undertake a study on protecting radio-spectrum access for scientific applications. They suggested that the effort address questions such as what research is needed to assess and mitigate interference, if there is agreement among stakeholders about how to conduct assessments of potential interference, and whether the concerns of scientific users of spectrum are being addressed in federal spectrum management processes.

They also note that such matters will be important heading into the next World Radiocommunications Conference in November 2023. More generally, they assert, “A clear message from PCAST would also empower OSTP and the NTIA to advocate for science spectrum needs more effectively.”

PCAST has not yet indicated whether it plans to undertake such a study.