With the launch of a new milestone-based funding program for commercial ventures, the U.S. is implementing a shift in its fusion energy policy that has been brewing for nearly two years. However, questions remain about how public programs will mesh with private investment, and what role the international ITER megaproject will play. 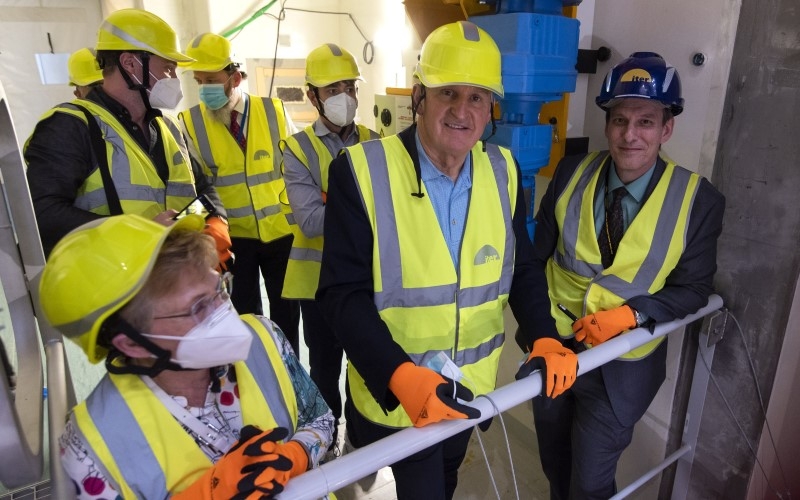 On Sept. 22, the Department of Energy launched a “milestone-based” program to accelerate the development of the U.S. fusion energy industry. Employing a model NASA has used to develop commercial resupply and crew transportation services for the International Space Station, the DOE program will award companies funds as they achieve goals leading toward construction of pilot fusion power plants. For the program’s first phase, DOE anticipates making between three and five awards, up to a total $50 million, for delivery of “pre-conceptual designs and technology roadmaps.”

The program is the first major step DOE has taken to implement a national policy turn toward supporting commercial fusion energy. That turn was mandated almost two years ago through the Energy Act of 2020 and further endorsed by a long-range plan the Fusion Energy Sciences Advisory Committee (FESAC) prepared for DOE. This spring, Congress appropriated initial funding for the milestone-based program, while the Biden administration threw in its own support, committing to pursuing a “bold decadal vision” for fusion. After that, DOE appointed department official Scott Hsu as its lead fusion coordinator, and he has said fusion will be prioritized in the administration’s fiscal year 2024 budget request.

As developments continue to unfold, questions still swirl around what a national policy for commercial fusion power should look like, and on Sept. 15 the Senate Energy and Natural Resources Committee held a hearing to explore the issue. One subject on lawmakers’ minds was what role federal activities will play given that private fusion efforts have recently attracted nearly $5 billion in investment. Another was what value the U.S. will gain from its participation in the international ITER fusion megaproject, given the swift progress much smaller efforts are apparently making.

Projected time horizons for practical fusion power have recently been becoming more ambitious. The FESAC long-range plan set a target of completing a pilot plant by the 2040s. Hsu, appearing as a witness at least month’s hearing, said DOE’s objective is to resolve “remaining scientific and technological challenges” during the current decade, with a pilot plant and first commercial deployments following in the 2030s.

Another witness, Commonwealth Fusion Systems CEO Bob Mumgaard, stressed that competition is motivating players to move quickly. “We are in a race to put that fusion on the grid as soon as possible in the '30s, and the consequences of not winning are substantial,” he warned. In his written testimony, he suggested that with public support CFS has a “real shot” at producing electricity commercially in the early 2030s.

A third witness, Princeton Plasma Physics Lab Director Steven Cowley, singled out China and the U.K. as major competitors. “China has a plan to get a pilot plant together on a slightly accelerated timescale, even compared to ours. And interestingly, they just announced a second machine to try and rival what Commonwealth Fusion are doing and go that route, which is the more compact route,” he said, adding, “Whether they'll move as fast as the private sector in the U.S., I have my doubts.”

Addressing work in the U.K., Mumgaard remarked, “The U.K. is in the middle of executing a very good transition from focusing on plasma science to enabling technology development at the U.K. Atomic Energy Authority and building test stands that other people are going to come use. And they’ve grown an entire technology cohort of people doing so.”

This week, the U.K. announced the selection of a power station in Nottinghamshire in the English Midlands as the site for a prototype fusion plant it plans to build by 2040. UKAEA is spending £220 million to complete a concept design for the plant by 2024.

The U.S. is not currently planning to back a particular pilot project. The new milestone-based program supports applications in two “tiers.” Applicants in the first tier will propose a schedule of technology milestones for a pilot plant concept, leading up to a successful preliminary design review by the late 2020s, with the objective of beginning plant operations in the early 2030s. Applicants in the second tier will propose work toward improving a preliminary concept for a plant that would begin operating in the late 2030s. Following their receipt of initial awards, awardees in both tiers will only receive additional funds once they have met project milestones.

All applications for the milestone-based program must be led by for-profit companies, though partners may include national labs, universities, and other organizations. The new CHIPS and Science Act has also directed DOE to support at least two “national teams” to develop conceptual designs and technology roadmaps for a pilot plant.

At the hearing, Cowley strongly endorsed that proposal, saying, “This is essential. We must urgently form those teams and develop these conceptual designs. … We’re ready to go.”

Manchin enthuses about ITER, but others are wary

Advocating for federal leadership in fusion energy, Mumgaard suggested the government will play a role that complements industry. He remarked, “We need the DOE national labs, the universities to focus on their core strengths — which is scientific computing, innovation at the basic science level, materials, et cetera — while the private sector focuses on its core strengths, which is deploying technologies, building things, engineering, market assessments, understanding what is attractive.”

Responding to a question from Sen. Bill Cassidy (R-LA) about the federal role in view of the large scale of private investment, Mumgaard said, “Just because we have Boeing doesn’t mean that we stop building wind tunnels in the public program. You have to keep innovating on the science. … And if we’re right, and we build a giant fusion industry, something like ITER makes a whole lot of sense, because it’s going to continue to be a center of excellence to try new things that are too risky for private programs to try.”

ITER has been in the works since the 1980s. While it will never produce electricity, it has been aiming to start plasma experiments in 2025 and to conduct experiments that produce more energy than they consume in the mid-2030s. However, the project is preparing to announce an adjusted cost estimate and schedule to account for pandemic-related delays.

The U.S. is currently contributing about $240 million to the project per year, and the CHIPS and Science Act recommends an increase to about $400 million. The Inflation Reduction Act has just provided DOE’s Fusion Energy Sciences program with a one-time $280 million boost, but even if most of that is allocated to ITER, Congress would still have to eventually follow through with higher annual appropriations to meet the targets set by the CHIPS and Science Act.

At the hearing, senators expressed a range of views about ITER. In his opening remarks, Committee Chair Joe Manchin (D-WV) enthused about a trip he made there last spring, saying, “It’s kind of changed me, who I am and what I think that we can do as a civilization on this Earth.”

He elaborated, “Touring a facility dedicated international scientific and engineering collaboration among our geopolitical rivals — including Russia, including China … — and allies helps restore faith in what we can do together given so much conflict at present.”

Ranking Member John Barrasso (R-WY) was more skeptical, pointing to how quickly companies such as CFS might achieve net energy production. “Should we be reprioritizing our investments in fusion research?” he asked. He also expressed wariness about the participation of China and Russia, referring to them as “bad actors.”

Sen. Angus King (I-ME) probed the issue from two opposite angles, asking whether the project exists to provide employment for scientists, but also whether the U.S. and other countries should be spending much more money on fusion given its transformative potential.

Sen. John Hoeven (R-ND) compared fusion to the Superconducting Super Collider high-energy physics megaproject that Congress terminated in 1993. “Are we really going to get there? Is this the fuel of the future and always will be?” he mused.

In discussion with Manchin, ITER Chief Scientist Tim Luce, the hearing’s fourth witness, argued the facility will be important for validating theoretical predictions about plasma behaviors. “We believe ITER will perform that demonstration in a variety of operating scenarios. This enables others to take that information and apply it to the design of pilot plants or power plants,” he said.

In response to other questions about ITER’s value, Luce also argued that, for only the cost of their individual contributions, partner countries will have full access to its science and technology. Asked by Sen. Mark Kelly (D-AZ) whether that means the U.S. has access to intellectual property from the project, Luce said it would and stressed that, in addition, U.S. scientists will gain practical know-how in fusion through their participation.