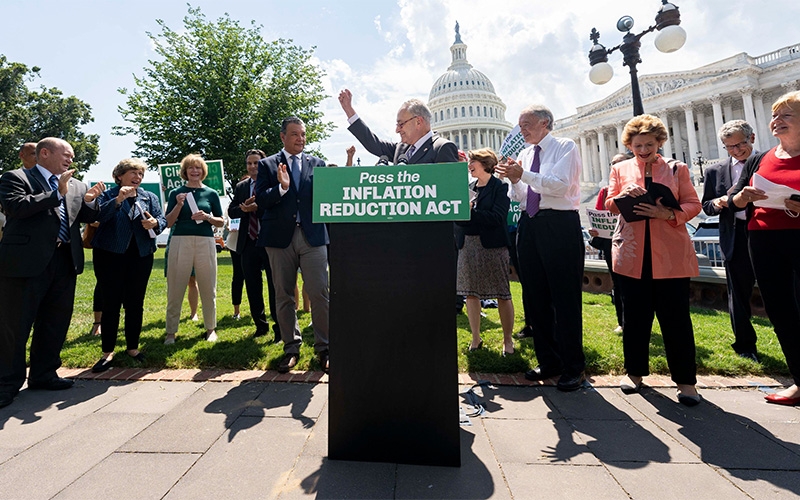 On Aug. 7, the Senate voted 51 to 50 to pass a landmark spending and tax reform package called the Inflation Reduction Act (IRA) that includes the most expansive measures the U.S. has ever implemented to mitigate climate change.

Facing unified Republican opposition, for the past year Democrats have been negotiating the bill’s contents so as to secure the unanimous support needed within their ranks in the Senate to pass it using Congress’ budget reconciliation process. Now that IRA has cleared that hurdle, the House is temporarily returning from its August recess tomorrow to approve the bill and send it on to President Biden for his signature.

IRA’s climate-related provisions will cost about $370 billion over multiple years and mainly comprise measures such as tax incentives and grants aimed at decarbonizing the economy and boosting resilience against environmental hazards. Within that funding, billions of dollars are allocated for scientific research and technology development, including a one-time $2 billion boost for projects at Department of Energy labs that are not directly related to climate change. The bill also includes nearly $500 million for climate and weather research and forecasting at the National Oceanic and Atmospheric Administration.

Lab project funding a remnant of Build Back Better Act

IRA’s funding for DOE lab projects is far less than the nearly $23 billion the House Science Committee proposed last year for infrastructure needs across science agencies as part of the more expansive Build Back Better Act. When House Democrats pared back that bill in a bid to secure more support for it, the science infrastructure money was mostly dropped, but some funding for DOE labs was then added back by the Senate Energy and Natural Resources Committee, which is chaired by Sen. Joe Manchin (D-WV).

Manchin, though, soon withdrew his support for the Build Back Better Act as a whole, halting its progress, and since then he has been the key gatekeeper for any efforts to pass a revised version. While IRA is, at Manchin’s insistence, narrowly focused on climate and energy, healthcare, and tax reform, a fraction of the DOE labs funding he previously advanced still made it through to the final version.

All the lab funding in IRA will be appropriated immediately and remain available through fiscal year 2027. While the act specifies how much individual DOE program offices will receive, it otherwise grants the department discretion around what projects to spend the money on.

High-energy physics ($304 million). The Fermilab-led LBNF/DUNE neutrino project is a likely candidate to receive a share of the funding, as it has experienced more than $1 billion in cost growth over the past few years. DOE has stretched out the project’s schedule to accommodate the increase, and, whereas it was once hoped science operations would begin in 2026, it is now expected to be ready in the early 2030s. In addition to delaying research opportunities, that outcome would likely leave the project significantly behind Japan’s planned Hyper-Kamiokande experiment in being the first to achieve certain key measurements. U.S. LBNF/DUNE Project Director Chris Mossey indicated last year it would be technically feasible to finish construction up to a few years earlier than the funding constraints expected at that time permitted.

Other high-energy physics projects that could receive funding include the U.S. contributions to the forthcoming luminosity upgrades to the Large Hadron Collider at Europe’s CERN lab. At the moment, DOE is aiming to catch up following a shortfall in the project’s appropriation this fiscal year. In addition, the Cosmic Microwave Background Stage 4 project is presently only receiving token support for early planning work.

Nuclear physics ($217 million). Construction of the Nuclear Physics program’s flagship Electron-Ion Collider will ramp up at Brookhaven National Lab following the planned shutdown of the lab’s Relativistic Heavy Ion Collider in 2025. EIC Project Director Jim Yeck recently testified to Congress that the project needs additional funding much sooner to prepare for construction and avoid layoffs of RHIC staff members who have expertise needed for the new collider. Aside from EIC, the Nuclear Physics program is also hoping to support a ton-scale neutrinoless double beta decay experiment but has not yet provided significant funding for one.

Basic energy sciences ($295 million). DOE’s Basic Energy Sciences program is stewarding a large portfolio of construction projects at its user facilities. One possible candidate for supplemental funding is the Second Target Station project at Oak Ridge National Lab’s Spallation Neutron Source. The station is expected to cost about $2 billion and would help alleviate a chronic shortage of capacity for neutron-scattering research in the U.S., but it is still on the back burner. Other projects that might be accelerated include a follow-on upgrade to the nearly completed Linac Coherent Light Source-II facility at SLAC and the build-out of beamlines at Brookhaven’s National Synchrotron Light Source-II facility.

Fusion energy sciences ($280 million). The U.S. contribution to the international ITER facility under construction in France is the main project DOE’s Fusion Energy Sciences program is currently supporting. Last year, the head of the U.S. project office for ITER, Kathy McCarthy, testified before Congress that the U.S. was running $97 million short of its commitment to the project. The CHIPS and Science Act that was signed into law this week also recommends Congress significantly increase the annual U.S. contribution going forward. Aside from ITER, the fusion program plans to upgrade SLAC’s Matter in Extreme Conditions end-station, increasing U.S. capacity for high-intensity laser research, but that project’s funding has been throttled back as DOE deliberates its scope.

Advanced scientific computing ($164 million). DOE is completing installation of exascale computers at Oak Ridge and Argonne National Labs, and it is not clear what follow-on projects might qualify for IRA funding within the Advanced Scientific Computing Research program. However, the program is planning to build a facility that will help handle the increasingly large volume of data DOE science facilities are producing. The CHIPS and Science Act also directs DOE to expand the program’s work on quantum networking infrastructure, recommending an annual budget of $100 million.

Isotope program ($158 million). Oak Ridge plans to construct a Stable Isotope Production and Research Center as well as a Radioisotope Processing Facility to expand domestic production of critical isotopes. Work on the former facility has yet to fully ramp up and the latter remains in its early design phase. Concerns surrounding isotope supply chains have recently become more urgent on account of the war in Ukraine and Russia’s role as a major supplier of both isotopes and uranium used to fuel isotope-production reactors. 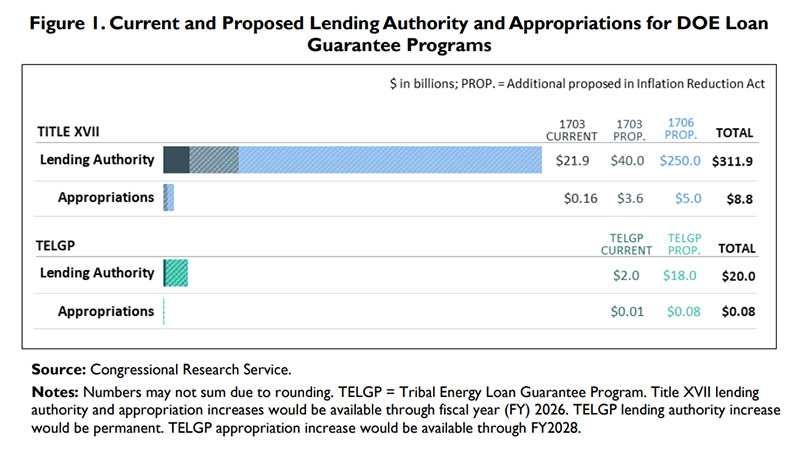 Aside from its support for scientific research, IRA’s vast array of decarbonization measures include provisions aimed at encouraging the deployment and commercialization of new technologies. Notably, it multiplies the capacity of DOE’s Loan Programs Office, primarily by creating a temporary program authorizing the office to guarantee up to $250 billion in loans for energy infrastructure projects. It also appropriates over $5.8 billion for a program at DOE’s new Office of Clean Energy Demonstrations that will support greenhouse gas emissions reduction projects at industrial facilities.

In addition, IRA aims to encourage the deployment of a new generation of nuclear reactors by appropriating $700 million to expedite the availability of the high-assay low-enriched uranium (HALEU) fuel many will use. HALEU is uranium that is enriched so that between 5% and 20% of its weight is composed of the highly fissile uranium-235 isotope. Russia is currently the world’s main HALEU supplier, and, even before the invasion of Ukraine, Congress was eager to develop domestic sources.

Within the Department of Transportation, IRA appropriates $245 million to fund projects relating to the production of sustainable aviation fuel and $47 million for projects related to low-emission aviation technology.

Among its other funds for NOAA, IRA provides support for climate and weather research and forecasting, comprising:

The bill also includes $23.5 million for the U.S. Geological Survey’s 3D Elevation Program, which provides high-resolution topographic data with a variety of uses, including in climate resilience, disaster response, and clean energy deployment.