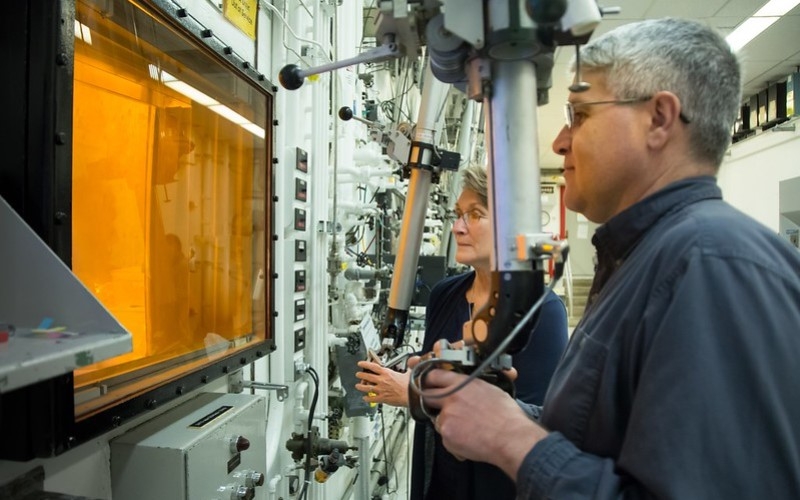 Oak Ridge National Lab is producing actinium-227, an isotope used in cancer treatment, through a 10-year contract between DOE's Isotope Program and and the Bayer pharmaceutical company. (Image credit – ORNL)

The prospect of sanctions on Russia’s nuclear industry over the country’s invasion of Ukraine has drawn fresh attention to the fragility of supply chains for isotopes used in a variety of medical and industrial applications.

Russia is the sole commercial supplier for some isotopes and a major producer of uranium, which is used in isotope production reactors. Recognizing risks of U.S. reliance on Russia and other countries for isotopes, five years ago the Department of Energy set in motion efforts to shore up domestic production capacity, but key facilities in that campaign are currently a decade from completion.

Against this backdrop, DOE Office of Science Director Asmeret Asefaw Berhe briefed the House Science Committee last month on the department’s efforts to mitigate isotope supply chain disruptions through its Isotope Program, which conducts R&D on production processes and makes certain isotopes that are in short supply or lack commercial production lines.

The committee also heard from Michael Guastella, executive director of the Council on Radionuclides and Radiopharmaceuticals, an association of isotope manufacturing and distribution companies, who called for halving the construction timeline for DOE’s planned production facilities.

In written testimony, Guastella stated that sanctions on Russia’s state nuclear energy corporation, Rosatom, or its subsidiaries would “significantly disrupt the supply of many of our essential medical and industrial isotopes.” He listed 44 isotopes for which the U.S. “largely” relies on Russian companies, either for raw materials or the isotopes themselves.

One example is molybdenum-99, a precursor to an isotope used in millions of medical imaging procedures annually in the U.S. Guastella reported that a “significant portion” of the U.S. supply of Mo-99 is produced using uranium sourced from Rosatom. The potential for supply disruptions is exacerbated by the fact Mo-99 is a radioisotope, meaning that it decays over time, in contrast to stable isotopes that can be stockpiled indefinitely.

Among isotopes with industrial applications, Guastella noted for example that Russia is the sole supplier of barium-132, a precursor to an isotope used in oil and gas refining, and that it is a leading supplier of iridium-192, used to test for pipeline leaks.

The U.S. has mulled sanctioning Rosatom, and some Republican lawmakers have called for the U.S. to ban imports of Russian uranium, though it is unclear if such measures are under active consideration.

Nevertheless, Energy Subcommittee Chair Jamaal Bowman (D-NY) noted at the hearing that isotope supplies could be disrupted regardless of whether the U.S. sanctions Russia’s nuclear industry. “Even without policy action banning the isotope trade between the U.S. and Russia specifically, our supply is threatened by the impacts we are already seeing in the banking and shipping industries,” he said.

Berhe reported some effects have already been felt. “There are roughly, for example, 31 radioisotope supply chains in which the U.S. had dependence on Russia and 19 of them have experienced some disruptions. But of those, the DOE isotope program has developed capabilities to produce 19, and another 11 of them are at various stages of development,” she said.

However, Berhe warned that shoring up domestic capacity will take time, even with strong support from Congress, saying, “This is an extremely technically challenging area, so there's not going to be any very quick fixes in the matter.”

Berhe explained in written testimony that the U.S. and Russia are the only countries with “extensive” stable isotope inventories but that U.S. supplies have dwindled since the 1990s when Oak Ridge National Laboratory stopped producing them.

DOE is reconstituting this capability at ORNL through construction of the Stable Isotope Production and Research Center (SIPRC), which will enrich large-scale amounts of multiple stable isotopes simultaneously using modern electromagnetic separation methods and gas centrifuges.

“The SIPRC will provide the U.S. with large-scale production capabilities of stable isotopes to rival those of Russia, as well as the new Chinese facility under construction,” Berhe wrote.

DOE is also speeding up production at existing facilities and plans to build a Radioisotope Production Facility at ORNL to further increase its ability to handle disruptions in the global isotope supply chain.

In its latest budget request, DOE estimated the SIPRC will cost $250 million and did not offer a figure for the Radioisotope Production Facility, which is at an earlier stage of planning. Berhe said DOE is pushing for the facilities to “come online as soon as possible,” though she reported that funding constraints so far have pushed their completion dates to “at least 2032.”

While the Ukraine war has heightened attention to the issue, concerns over disruptions to isotope supply chains have existed for some time. Guastella pointed out certain isotope supplies were jeopardized due to air travel restrictions after the Sept. 11, 2001 terrorist attacks and during the early days of the COVID-19 pandemic.

Guastella outlined a variety of actions that could help the U.S. head off future disruptions, including ramping up appropriations for SIPRC and the Radioisotope Production Facility with the aim of completing them in the next four to five years. He also recommended the Biden administration launch a “White House-level supply-coordinating effort” to ensure a reliable domestic supply of isotopes, pointing to the success of an earlier coordination effort focused on Mo-99.

He also argued that while DOE’s Isotope Program could serve as a “bridge” as the U.S. scales up its isotope production capabilities, private industry should generally take the lead. He stressed that DOE should maintain its policy of exiting the market once private industry can meet demand, eventually returning its focus to producing isotopes needed in applications that are not served by the commercial market, such as scientific research.

The committee has already endorsed this view in legislation it developed that has been incorporated into the pending America COMPETES Act of 2022. The legislation would direct DOE to ensure the isotope program’s activities “do not compete with private industry” unless the agency determines that “critical national interests require the involvement of the federal government.”