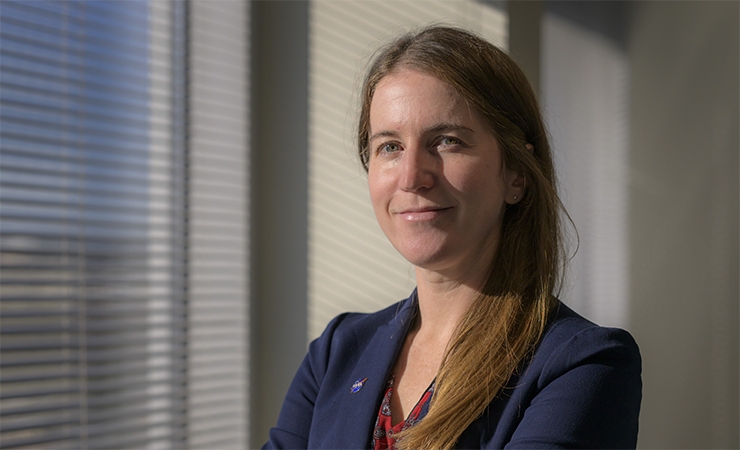 NASA announced on Jan. 10 that Earth scientist Kate Calvin will serve as the agency's chief scientist and senior climate advisor. Introducing her at a media event the next day, NASA Administrator Bill Nelson stressed her experience in climate-system modeling and the importance of the agency’s work in Earth science, saying, “NASA really is the point of the spear when it comes to climate change.”

In her role as chief scientist, Calvin will advise NASA's leaders on science activities across the agency and represent its science objectives and contributions to national and international stakeholders. In the senior climate advisor position, which NASA created last year, she will steer the agency’s climate change communication efforts and promote both its Earth science research as well as its emissions-mitigation work in aeronautics and technology.

Calvin earned her bachelor’s degree in mathematics and computer science from the University of Maryland and her master's and doctoral degrees in management science and engineering from Stanford University. In 2008, she joined the Pacific Northwest National Lab's Joint Global Change Research Institute in College Park, Maryland, as a research scientist

At the institute, she worked on the Global Change Analysis Model, which analyzes the interactions between humans and the Earth, including between systems such as agriculture and land use, the economy, and the atmosphere. Calvin has used the model to explore questions such as how different land-use policies affect atmospheric carbon dioxide concentrations, agricultural supply, and food prices. She also worked on a new Earth-modeling system designed to run on the exascale computers the Department of Energy is building at two of its national labs.

Asked at the Jan. 11 press event about her interests in NASA apart from Earth science, Calvin recalled her early exposure to the agency’s work through movies and expressed her excitement for upcoming missions, mentioning the recently launched James Webb Space Telescope and Double Asteroid Redirection Test.

Quickly returning to the subject of climate, she remarked, “In general, my interest is in trying to connect the climate science research with the rest of the research in NASA.” As examples of possible initiatives, she suggested exploring how water reclamation systems on the International Space Station might be adapted to help communities facing water shortages, and how the station's carbon dioxide removal systems might inform carbon capture technologies on Earth.

Calvin also highlighted the work of NASA’s Earth Science Division and in particular its recently announced Earth System Observatory satellite initiative, which is accelerating and coordinating the agency’s response to the latest National Academies decadal survey for Earth science. She pointed to the upcoming NASA-ISRO Synthetic Aperture Radar (NISAR) satellite the U.S. is pursuing with India, which NASA has framed as a precursor to the Earth System Observatory, noting its usefulness for monitoring ice-sheet collapses and landslides.

She said her intention is to increase the prominence of the agency’s climate work, remarking, “When people hear NASA, I want them to think of climate science alongside planetary science.” NASA’s Earth Science Division currently has an annual budget of $2 billion, which is about a quarter of the budget of the agency’s Science Mission Directorate and about 9% of the overall NASA budget.

Calvin is NASA’s 11th chief scientist, succeeding space physicist Jim Green, who served for nearly four years in the position before retiring at the beginning of this year. During his tenure, NASA worked to more thoroughly integrate its science and crewed exploration activities after resuscitating its plans to return to the moon through its Artemis program. The program is set to take a major step this year with the flight of the uncrewed Artemis I mission as well as the launch of the first missions in the Commercial Lunar Payload Services program, which contracts commercially operated robotic landers to convey scientific instruments and technology demonstrations to the lunar surface.

NASA’s senior climate advisor role, created last February, had been filled on an acting basis by Gavin Schmidt, a climate scientist who is director of NASA’s Goddard Institute for Space Studies in New York City.