The White House Office of Science and Technology Policy is advancing five new principles for protecting scientific integrity, with an eye toward guarding against political interference across federal agencies.

The White House Office of Science and Technology Policy released an interagency report last week that assesses the state of scientific integrity policies across federal agencies and outlines “good practices” for strengthening their application. It also identifies new principles that should underpin agencies’ scientific integrity policies, among them that the policies should apply to all employees who use or communicate science, including political appointees.

The report responds to a memorandum President Biden issued during his first week in office and builds off an earlier push on the issue during the Obama administration that established six principles for ensuring the integrity of federal research. That earlier push followed President Obama’s pledge to put “science in its rightful place” in the wake of criticisms of the Bush administration’s regard for scientific integrity. However, the subject returned to prominence after weaknesses in the Obama-era policies were exposed by incidents during the Trump administration, a few of which are recounted in the new report.

The “fast track” task force that produced the report was assembled last May, comprising 57 members from 29 agencies, with co-chairs drawn from the Environmental Protection Agency, the U.S. Geological Survey, the National Institutes of Health, and the Department of Education. The effort was supposed to take 120 days, but ultimately the first phase lasted about twice that long. 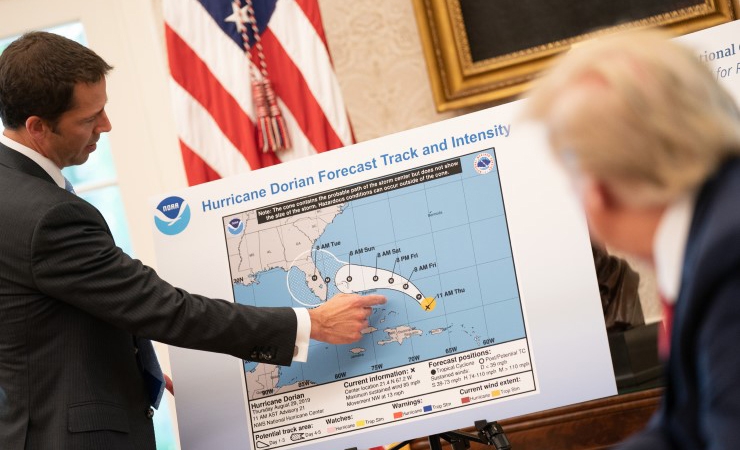 The task force concludes that federal science “remains fundamentally sound” and that the number of reported violations of scientific integrity policies is relatively small, but asserts such violations can severely erode public trust and the morale of federal scientists.

It offers three examples from the Trump administration: the posting of pandemic guidance documents to the CDC’s website without the agency’s approval, changes made to the administration of the 2020 Census, and Commerce Department officials’ criticism of a local weather forecast office for contradicting President Trump’s claims about the path of Hurricane Dorian. Each case centered around the conduct of political appointees and the report notes that no officials were sanctioned for their conduct.

The Hurricane Dorian incident was already the subject of an independent review that was released in June 2020, which found that political officials at the National Oceanic and Atmospheric Administration, under pressure from the Commerce Department, released a statement inappropriately criticizing forecasters and undermining NOAA’s “reputation as an independent scientific agency.” The acting head of NOAA at the time, Neil Jacobs, disputed the review’s conclusion that he violated the agency’s scientific integrity policy, arguing in part that the policy did not apply to the statement in question.

NOAA, which is housed within the Commerce Department, did not take punitive actions following the review but did recommend, among other actions, that the department establish its own scientific integrity policy that covers both career and political leaders.

The task force report notes that while agencies are generally able to deal with integrity violations resulting from research mismanagement or misconduct, many are ill-prepared to deal with interference from senior leadership or those who use or communicate science. In the case of the Hurricane Dorian incident, the report states, “The officials who could have imposed [punitive] actions were the very people who had instructed that the offenders take the wrongful actions.”

As a remedy, the task force suggests ways of instilling a culture of scientific integrity within agency leadership. For instance, it recommends political appointees be required to attest they understand the scientific integrity policy and received training on it, and that this information be made publicly available on the agency’s website.

Acknowledging that such measures would “fall short of comprehensive solutions” to preventing political interference, it also calls for a government-wide effort to establish “additional and enforceable protections for those who report allegations of scientific integrity violations.” In addition, it states there should be “clear consequences for senior officials who knowingly violate scientific integrity policies.”

Together, the good practices identified by the task force span all stages in the conduct and use of research, from the collection of data to the communication and application of results.

For instance, concerning the conduct of science, it suggests agencies disclose study plans early in the research process and promptly release associated data and code, both to aid in the detection of any manipulations to the study and to foster greater trust. It also recommends agencies establish formal procedures for handling disagreements among scientists, pointing to a process recently established by the EPA.

Addressing the use of science, the report draws a distinction between “science-based” decisions, such as in designating endangered species in accord with law, and “science-informed” decisions, where many other factors are at play, such as economic costs or equity considerations. It also distinguishes between legitimate forms of intervention, such as a policymaker not following a scientific recommendation due to the associated costs of the action, versus political interference, which might involve the deliberate mischaracterization of evidence.

The task force observes that the likelihood of certain violations is apt to vary considerably based on the character of the agency in question. Those with strong regulatory roles, such as EPA, will likely face a broader set of integrity challenges than those that primarily fund research, such as NIH or the National Science Foundation.

In addition, the report addresses various subjects that have come to the fore in recent years, such as how integrity policies should account for expanded use of social media and the potential for emerging technologies such as artificial intelligence to bias research results. It also identifies citizen science and community-engaged research as “emerging modes of science” that require attention in integrity policies and can be helpful in building trust in federal science.

Reflecting on how integrity policies can support the priorities of addressing inequities in science, the report highlights that USGS is updating its scientific integrity policy to place a high priority on investigating potential violations that “have a disproportionate impact on underrepresented groups.”