Under the Biden administration, the Department of Energy has been intensely focused on accelerating decarbonization, particularly through the development and deployment of emerging energy technologies. However, some members of Congress maintain that DOE is neglecting the needs of its Office of Science, which oversees a $7.5 billion portfolio of research programs and major science facilities.

The House Science Committee convened a hearing on April 27 to spotlight what it regards as shortcomings in the administration’s fiscal year 2023 budget request for the office. Although the administration is seeking a 4% budget increase, Democratic and Republican committee members agreed the office needs significantly more funding than that to advance its work and avert harms to facility operations and construction projects.

Some committee members also argued that DOE leaders need to do more to stand up for the office’s core programs. They prevailed on the hearing’s sole witness, DOE Under Secretary for Science and Innovation Geri Richmond, to fight for higher funding allocations and to ensure the budgetary needs of facility projects are calculated properly.

Energy Subcommittee Chair Jamaal Bowman (D-NY) opened the hearing by praising the administration’s focus on clean energy and energy justice, saying, “Let’s keep going bigger on all of this.” Even still, he lamented that its budget request “underinvests” in the Office of Science and would leave facility projects without enough funding to maintain their schedules. He warned,

The resultant delays and increased price tags caused by a lackluster budget impede scientific progress and deny DOE’s internal and external research communities access to the most up-to-date instrumentation. Furthermore, they raise alarm among the department’s contractors and collaborators — both domestic and international — about its commitment to these projects.

Republicans on the committee assert the administration is overreaching on decarbonization and have specifically questioned DOE’s plans to hire roughly 1,000 employees to staff what it is calling a “Clean Energy Corps” that will help implement last year's infrastructure funding law. In a letter to DOE last month, they wrote, “If poorly implemented, the Clean Energy Corps has the potential to be a significant waste of taxpayer dollars that, instead of furthering the department’s work to develop clean-energy solutions, will drain resources and focus from critical research activities.”

I fear that this request is not sufficient to support the numerous construction projects and upgrades required to maintain the Office of Science’s top-of-the-line facilities and address emerging challenges for these projects. Instead, the proposal appears to be more focused on Green New Deal talking points than on mission-critical DOE needs.

Richmond urged to advocate for Office of Science

Throughout the hearing, Richmond defended the proposed budget as a “strong” one and said it follows “the priorities of the Biden administration in putting forth funding, especially for climate change and equity issues.”

She also stressed that DOE is strengthening the interchange between offices dedicated to research and technology maturation. She remarked during one exchange,

With this budget, I believe that it is helping us be a new DOE. And I truly believe that this is a new DOE, because we are absolutely hell-bent on making sure that we can take the discovery science as quickly as possible to the applications and demonstration and then to deployment.

Pressed on the proposed budget’s consequences for places such as Berkeley and Argonne National Labs, she expressed her high regard for DOE’s labs but allowed that some projects would proceed more slowly and staff cutbacks could prove necessary. Speaking to Rep. Sean Casten (D-IL), whose district neighbors Argonne and Fermilab, she remarked, “This is, again, setting priorities that are hard to do. It’s very painful to do.”

Unsatisfied with Richmond’s explanations, Casten suggested that budget requests should convey the administration’s “ambition” and leave budgetary tradeoffs to Congress. “Please be ambitious. Let us know how we can help,” he told her.

Rep. Bill Foster (D-IL), a former Fermilab physicist whose district borders Casten’s, urged Richmond to stand firm on the office’s needs when future requests are formulated. Richmond was confirmed as under secretary in November, after DOE and the White House’s most active discussions over the fiscal year 2023 request had already wrapped up.

“Show, if not some stiffness of spine, at least some viscosity of spine in these negotiations with the administration, because I know they’re really tough. But it’s an important part of your job to make sure the administration is dealing honestly with the sacrifices that they’re asking you to make when they tell you to stand up and deal with a 4.3% increase that doesn’t cover inflation,” Foster said.

“I take your advice. I will take it back, and I’ll fight like hell, too,” Richmond assured him.

Aside from the proposals for the office’s topline budget, some committee members also questioned how the office formulates requests for specific facility projects. Bowman remarked, “The office’s strategy for estimating project costs involves annual self-editing of the project funding profiles to fit within a relatively low, arbitrary funding level for the office that DOE believes is achievable. In other words, this hasn’t been a bottom-up process.”

Although DOE presents updated estimates of project schedules and total costs in its annual budget justifications, it does not typically indicate whether the levels requested for the year meet or fall short of those needed to keep projects on their notional schedules. DOE also generally does not release estimates concerning how suboptimal levels might stretch schedules and increase overall costs.

Richmond told Bowman that the office is currently undertaking a “rebaselining” exercise that will assess projects’ “actual costs,” which she said will consider impacts stemming from the pandemic, inflation, and changes in how facilities operate.

Revisiting the subject later, Foster asserted that DOE is planning on reducing the scientific capabilities of certain projects to accommodate cost pressures stemming from the pandemic and inflation, among other causes. He urged that any revised estimates reflect projects’ originally envisioned scope as well as “healthy” contingency funding.

“That’s not going to be the first reaction, because the numbers are going to be significant. … So, please do that honestly,” he said. 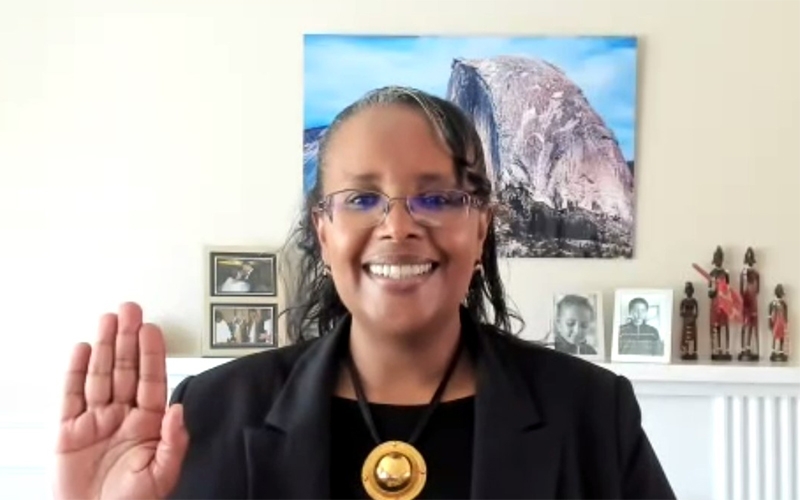 Asmeret Asefaw Berhe was sworn in as director of the DOE Office of Science on May 19. (Image credit – DOE)

Going forward, DOE policy concerning the Office of Science will be in the hands of not only Richmond, but also its new director, Asmeret Asefaw Berhe, whom the Senate confirmed on May 10, more than a year after her nomination.

As a soil scientist at the University of California, Merced, Berhe was picked for the job in large part because of her expertise in the links between Earth systems and climate change, as well as her advocacy for equity and inclusion in research. Senators, though, were split largely along party lines on whether she was a good choice.

In floor remarks prior to the confirmation vote, Senate Energy and Natural Resources Committee Ranking Member John Barrasso (R-WY) reiterated his argument that her scientific background is ill-matched to managing the office’s expansive portfolio in the physical sciences and large-scale research facilities.

“So, not that there is anything wrong with her underlying experience to do other things, but for this specific position, the qualifications just aren’t there,” he said.

In his own remarks, Energy Committee Chair Joe Manchin (D-WV) praised Berhe’s accomplishments and defended the relevance of her expertise. “The Office of Science itself has long engaged in basic research relating to soil science and broader ecological questions, whether tracing radioactive elements through the atmosphere or the flow of energy, water, and carbon through the Earth’s natural systems. So, her background is an asset and makes her very well suited to lead the Office of Science,” he said.

Ultimately, every Senate Democrat voted to confirm Berhe, while the only Republicans to back her were Sens. Bill Cassidy (R-LA), Susan Collins (R-ME), Lindsey Graham (R-SC), and Lisa Murkowski (R-AK).

Berhe was officially sworn in as director on May 19, closing out a 16-month period in which the Office of Science did not have a Senate-confirmed leader. The absence of politically appointed leadership in the office has become common in recent years: since physicist Bill Brinkman stepped aside as director in 2013, the office has lacked a Senate-confirmed director about 70% of the time.