The James Webb Space Telescope has successfully reached its orbit following a protracted mission-development process that was plagued by severe cost growth. Lessons learned from that experience have led to reforms in how NASA manages large space science missions. 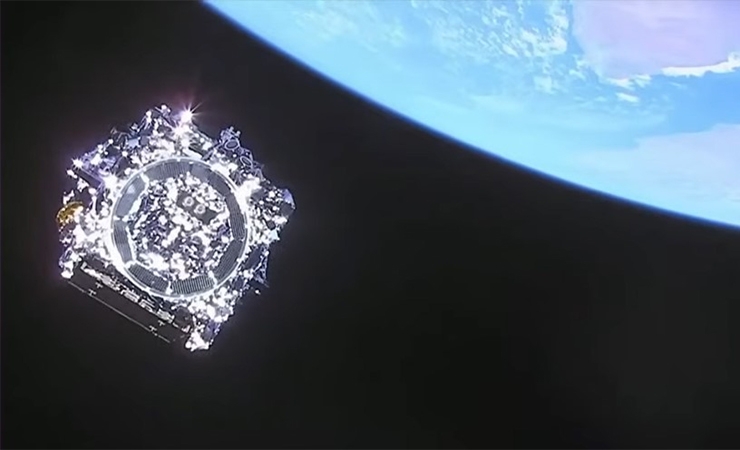 The James Webb Space Telescope separates from its launch vehicle on Dec. 25, 2021.

On Jan. 24, the James Webb Space Telescope (JWST) edged into orbit around Earth’s second Lagrange point, a location in space 1.5 million kilometers away. There, a balance of gravitational forces will help anchor the telescope in position with respect to the Earth as they move together around the Sun.

The maneuver completed a month-long journey that began Christmas Day, when JWST launched aboard an Ariane 5 rocket provided by the European Space Agency. Afterward, astronomers and many others followed closely as the mission team deployed the telescope into its operational configuration.

Much of the attention owed to the angst and high stakes that accrued during the mission’s troubled development as its expected cost spiraled upward to about $10 billion. NASA is already drawing on lessons from JWST to change how it manages its most expensive and difficult science missions.

For JWST itself, all is now going well. The telescope’s operators report that the precision of the launch allowed them to minimize fuel use on the journey, leaving enough to maintain a stable orbit for at least 20 years. Once the telescope completes its commissioning early this summer, it will be ready to inaugurate a new era of space-based astronomy.

While eagerly welcomed, the JWST era of astronomy is arriving about a decade later than initially anticipated.

The idea for the telescope traces back to discussions  in the 1980s at the Space Telescope Science Institute in Maryland concerning a potential successor to the Hubble Space Telescope, which the institute was then preparing to operate. Early work culminated with a workshop in 1989 on what was called the “Next Generation Space Telescope.”

Planning accelerated in the mid-1990s, eventually settling on a design for an infrared observatory with a mirror about 8 meters in diameter. NASA formally initiated mission formulation in 1999 and the project received a crucial endorsement in 2000 when it was identified as the top priority by the National Academies decadal survey for astronomy and astrophysics. The mirror was revised down to 6.5 meters the following year, and NASA gave the telescope its current name in 2002.

The decadal survey’s early cost estimate for JWST of $1 billion became quickly outdated in the early 2000s as work proceeded with maturing technologies required for the mission. At the beginning of 2005, the mission’s estimated lifecycle cost stood at $3.5 billion, and that figure climbed another $1.5 billion by the time NASA set the project’s baseline cost and schedule in 2008.

Then, repeated requests by NASA for additional funding aroused suspicions in Congress about the project’s progress, particularly from Sen. Barbara Mikulski (D-MD), the top appropriator for NASA in the Senate and JWST’s foremost congressional champion.

In response, NASA organized a sweeping independent review in mid-2010 that roundly criticized the project’s cost evaluation methods and management. The review explained that, while teams working on technology maturation had performed well, the project routinely deferred elements of the work to keep within annual budgets, which both prolonged the maturation process and increased total costs in opaque ways.

“Unaware of how badly understated the JWST budget was, NASA management thought there was a 70% probability of launching in June 2014 at a total lifecycle cost of nearly $5 billion with the confirmation budget profile. In fact, the project had no chance of meeting either the schedule or the budget profile,” the review charged.

JWST’s lifecycle cost was actually around $6.5 billion, according to the review. Days before that figure was released, the journal Nature tagged JWST as the “telescope that ate astronomy,” referring to the threat its relentless budget growth seemed to pose to other programs and projects.

In 2011, NASA thoroughly reworked its plan for JWST and replaced the project’s senior management. It also arrived at yet another lifecycle cost estimate: $8.8 billion.

Meanwhile, House and Senate appropriators sparred over whether to cancel the project. Led by Mikulski, JWST’s backers prevailed and the project now moved ahead under a statutory cap on its development costs with a launch set for 2018.

After 2011, work continued without major incident until the spacecraft integration and testing phases of the project, when new difficulties led to further delays and a cost-cap breach. Because some of these problems exposed “embedded” engineering errors, there were also concerns about the spacecraft’s integrity, and a new external review was conducted to shore up the situation.

Congress continued to support JWST and the project proceeded without further major technical hurdles, though the pandemic would deal one last blow to its budget and schedule.

Now, with the telescope’s launch finally behind it, hopes are high that the mission’s scientific achievements will soon eclipse memories of early troubles, as happened with Hubble almost 30 years ago. 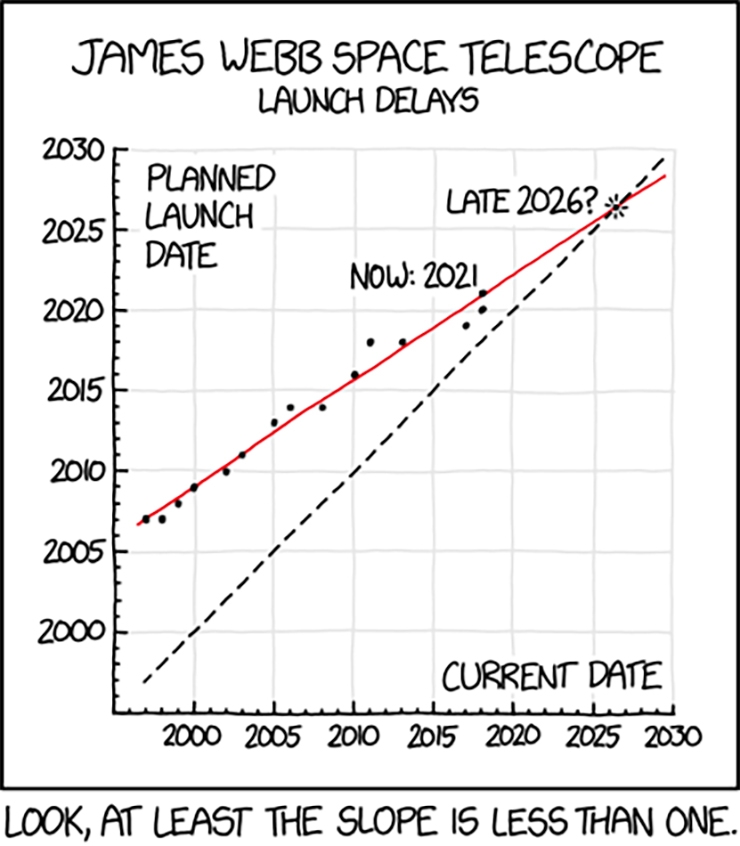 In 2018, the web comic xkcd plotted the seemingly continual retreat of JWST’s launch date over time.

The past two decades of experience with JWST has led to reforms in how such large missions are managed. Most immediately, in 2011 NASA elevated administration of the project out from within its Astrophysics Division, and Congress required the Government Accountability Office to review progress annually. The National Academies decadal surveys have also adopted more sophisticated methods of cost evaluation to set more realistic expectations.

Not long after the 2011 crisis, NASA Administrator Charles Bolden publicly questioned the political and budgetary practicality of large-scale missions. In response, in 2016 NASA Science Mission Directorate head John Grunsfeld commissioned a National Academies study to make a case for such missions and to push back against the perception they present a danger to other parts of NASA’s science portfolio. He and others have stressed it is NASA policy that cost overruns on large missions not be covered by diverting funds from other programs and projects, but rather by stretching out the mission’s development schedule and delaying later large missions.

The agency also recently completed an internal examination of how it administers large missions. That study spotlighted the need to make firm decisions about mission scope, focus resources on technology maturation, and set up a standing review board, all at an early point in the mission development process.

Some concrete choices NASA has made over the last several years directly reflect lessons it has learned. For instance, to control incipient cost growth on the follow-on Nancy Grace Roman Space Telescope, it initiated an independent review that recommended design revisions, which were quickly implemented. NASA also closely monitored the progress of instrument development for the Europa Clipper and made a substitution after cost growth on one instrument triggered a review.

NASA has placed its latest large project, the Mars Sample Return mission, within its own program apart from the rest of the agency’s planetary science portfolio and subjected it to an early review by an independent board. That review recommended that NASA increase its cost estimates for the project and the agency promptly followed its recommendation to ramp up funding quickly to retire technical risks and avoid severe disruptions later.

The latest decadal survey for astronomy and astrophysics, released in November, recommends that NASA establish a dedicated maturation program for its largest missions, allowing it to develop technology and science requirements in tandem before committing to a design. NASA has indicated it intends to follow that course. 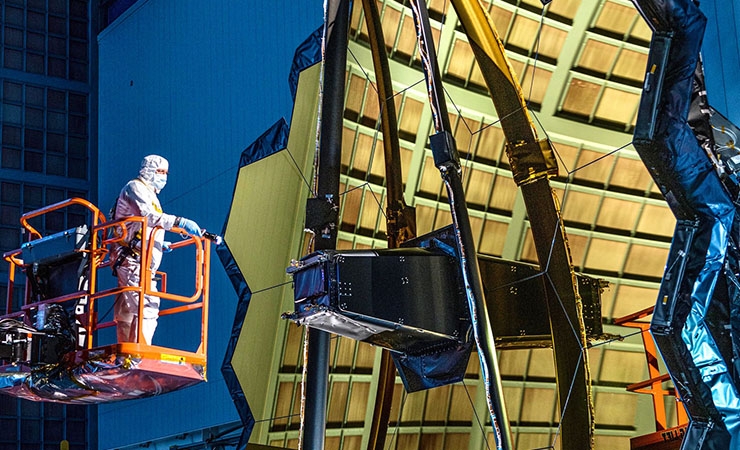 Although JWST will unquestionably be the most powerful observatory at astronomers’ disposal and was envisioned as a successor to the Hubble Space Telescope, it will still operate as part of a portfolio of capabilities.

Hubble, which continues to operate, was itself one of four “Great Observatories,” each covering different portions of the electromagnetic spectrum. JWST will specifically restore and expand capabilities at infrared wavelengths that have been missing since early 2020, when NASA decommissioned the last of the Great Observatories to launch, the Spitzer Space Telescope.

Observations in the infrared are well-suited for viewing the earliest, most distant galaxies as well as for characterizing exoplanets orbiting other stars. They are also a particularly attractive option for space telescopes, since the Earth’s atmosphere blocks most infrared light from reaching observatories on the ground.

Later this decade, JWST is set to be joined in space by the Roman Space Telescope, which is itself multibillion-dollar infrared observatory that will be able to observe at the same resolution as Hubble, but across a field of view 100 times larger than that of either Hubble or JWST. This wide field will allow it to effectively address questions such as how galaxies and clusters of galaxies evolve, and how dark energy and dark matter operate in the universe.

Meanwhile, astronomers could soon lose capabilities at far-infrared wavelengths that are inaccessible to JWST and Roman if Congress follows recommendations by NASA and the decadal survey to terminate the Stratospheric Observatory for Infrared Astronomy (SOFIA). That airplane-mounted facility has its own turbulent history and is burdened by high operating expenses and relatively low productivity.

However, a far-infrared space telescope is also one of two options NASA is considering for a new medium-scale mission that would be constructed later this decade. That sets up the possibility that in the 2030s the astronomical sciences community could have access to three cutting-edge infrared observatories at once.