Among the highest priorities of the National Academies’ latest astronomy and astrophysics decadal survey are that the U.S. build a large infrared/optical/ultraviolet space telescope and advance one or preferably both of the ground-based facilities planned under the Extremely Large Telescope Program. 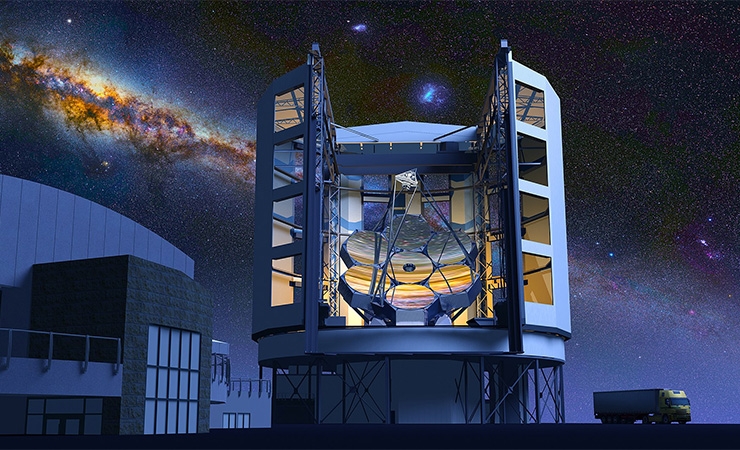 An illustration of the Giant Magellan Telescope, a project planned for construction at the Las Campanas Observatory in Chile and one of two telescopes in the U.S. Extremely Large Telescope Program. The Astro2020 decadal survey recommends that the National Science Foundation proceed with funding at least one, and preferably both, of the telescopes.

Today, the National Academies released “Pathways to Discovery in Astronomy and Astrophysics for the 2020s,” its latest decadal survey of the field.

Known as Astro2020 for short, the survey recommends the U.S. pursue an ambitious suite of space-based telescopes and ground-based observatories over the coming decades. Mindful of difficulties that the largest-scale projects have encountered in the past, the survey also presents ideas for ensuring such projects proceed more smoothly in the future.

The survey is broadly understood to present consensus priorities on behalf of the astrophysical sciences community. It was assembled over nearly three years by a 20-member steering committee and 13 expert panels charged with gathering input from across the community and reviewing proposals for major projects. The effort was chaired by Caltech professor Fiona Harrison and Texas A&M University professor Robert Kennicutt and assisted by a cost analysis team at the nonprofit Aerospace Corporation.

The survey’s recommendations are not binding, but will carry great weight with Congress and the three federal agencies that fund most U.S. astrophysical research: NASA, the National Science Foundation, and the Department of Energy.

The survey’s recommendations for major facilities are based on their ability to advance work on 24 key science questions identified by the survey’s expert panels. These questions are grouped into three themes:

Worlds and suns in context entails the study of exoplanets and planetary systems, which are now discovered as a matter of routine but remain difficult to study in detail. The survey places a particular emphasis on imaging and analyzing potentially habitable exoplanets.

New messengers and new physics concerns the nascent revolution in “multi-messenger” astrophysics, which combines observations of gravitational waves and elementary particles with observations of light and other wavelengths of electromagnetic radiation. The theme also encompasses the study of transient phenomena, such as neutron star collisions and other explosive events, as well as ongoing efforts to investigate the nature of dark matter and dark energy.

Cosmic ecosystems involves the study of the origins and evolution of galaxies, massive black holes, stars, and planets, and understanding the connections between these processes.

For space missions, the survey’s highest priority is a “large infrared/optical/ultraviolet telescope” that has an aperture of approximately six meters and is equipped with a coronagraph to block out light from bright stars.

The telescope’s proposed aperture size stems from the capability needed to investigate approximately 25 habitable-zone exoplanets by using spectroscopy to characterize their atmospheres and detect possible signs of life. In addition to studying exoplanets, the survey states the telescope would also be well-suited to observing many other phenomena and would “directly address” two-thirds of the survey’s 24 science questions.

Notably, the proposed telescope is similar to that presented in the “LUVOIR” concept study, which was one of four flagship mission studies NASA sponsored to inform the survey. However, its aperture size is smaller than what the concept study proposed for either of the two potential telescope configurations it presented.

Justifying the smaller aperture, the survey states that although the concept study anticipated LUVOIR would launch in 2039, it is likelier that even the smaller-scale configuration proposed in the study would not launch until the late 2040s or early 2050s. The survey estimates the reduced-scale IR/O/UV telescope it recommends could launch in the early 2040s and argues it “provides an appropriate balance between scale and feasibility.”

The telescope’s expected price tag is $11 billion in 2020 dollars, which is comparable to the inflation-adjusted costs of the Hubble Space Telescope and the James Webb Space Telescope.

The survey also endorses NASA’s creation of a new “probe” class of astrophysics missions that would have costs capped at $1.5 billion, intermediate between the budgets of larger flagship missions and smaller-scale Explorer missions. In setting that limit, the survey notes it concluded that only one of nine probe-scale mission concepts submitted to the survey could be achieved for less than $1 billion, while $2 billion missions would endanger a desired launch cadence of one mission per decade.

According to the survey, probe-class missions will help maintain “panchromatic” observational capabilities while future flagship telescopes are still in development. The survey recommends probe missions be selected from proposals that respond to priorities identified through decadal survey processes. As priorities for the first such selection, the survey identifies observations in X-ray wavelengths that would complement Europe’s Athena mission, as well as observations in the far infrared. 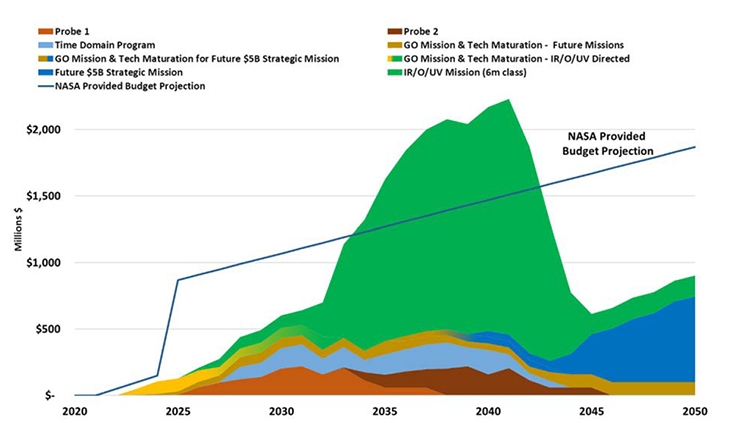 The decadal survey’s projections for spending on survey priorities in NASA’s Astrophysics Division. By focusing on maturation prior to greenlighting flagship missions, the survey argues it will be possible to pursue a more efficient and less risky mission-development process. The survey also proposes that maturation of the next flagship mission begin before ramping up work on a mid-scale “probe” mission.

In its fiscal year 2022 budget request, NASA has carved out a “wedge” of funding for responding to decadal survey recommendations that is tentatively reserved for work on a probe-class mission. However, in a chart laying out its own budget roadmap, the survey does not envision devoting funding to such a mission until fiscal year 2026.

Instead, the survey recommends dedicating near-term funding to a new “Great Observatories Mission and Technologies Maturation Program,” which it presents as a “new approach” to planning flagship-scale missions.

The survey explains that flagship missions routinely have development timescales stretching multiple decades and that immaturity of their component technologies has in the past led to costly difficulties. “By investing more in the maturation process, NASA could develop missions to a level where there is significantly more confidence in the costs and requisite cost profiles before seeking congressional approval for the final implementation,” it states.

The maturation program would be responsible for co-developing science questions, component technologies, and mission architectures for the largest-scale missions that decadal surveys recommend. Accordingly, the survey recommends the IR/O/UV telescope immediately enter the program, where it would remain for about six years with a total maturation budget of about $800 million.

Once the IR/O/UV telescope moves into its mission formulation phase, the maturation program could then begin simultaneously maturing follow-on flagship telescopes that would observe in the far infrared and X-ray wavelengths. With prospective budgets in the range of $3 billion to $5 billion, the survey suggests such telescopes would be less expensive than the comparable Origins and Lynx flagship concepts submitted to the survey while still effectively addressing flagship-caliber science priorities.

The survey’s top priority for ground-based astronomy is for NSF to support the construction of at least one and preferably both of the facilities in the U.S. Extremely Large Telescope Program: the Thirty Meter Telescope (TMT) and the Giant Magellan Telescope (GMT). It explains that the telescopes’ designs are already mature and capable of addressing nearly all the survey’s science questions.

The survey estimates the respective construction costs of GMT and TMT are $2.4 billion and $3.1 billion. NSF would be responsible for $800 million per project, which would garner U.S. users about 25% of available observing time. The key risk identified for the projects is that partner contributions covering the total cost have not yet been secured, nor has there been a firm site selection for TMT.

To decide whether to support one or both telescopes, the survey recommends NSF conduct an external review to ensure the viability of the projects, with a target completion date in 2023. If it is concluded only one project should proceed, the survey recommends NSF increase its contribution to that project to up to 50% of costs to ensure sufficient facility time for U.S. users.

The survey does not take a stance on the site for TMT. Concerning the resistance of Kanaka Maoli (Native Hawaiian) protesters to TMT’s construction on Maunakea in Hawaii, the survey cites it as a key example of the need for a “Community Astronomy” model that fully engages and empowers local stakeholders.

The survey’s Panel on the State of the Profession and Societal Impacts addresses the issue further in its report to the survey, which is included as an appendix but does not offer official recommendations. The report broaches potential initiatives to repair relations with the Kanaka Maoli protestors and states, “The panel strongly suggests that any new or continued construction on the summit of Maunakea be contingent upon having proactively established a pathway forward using a community-based approach that is based on consent and mutual agreement.” 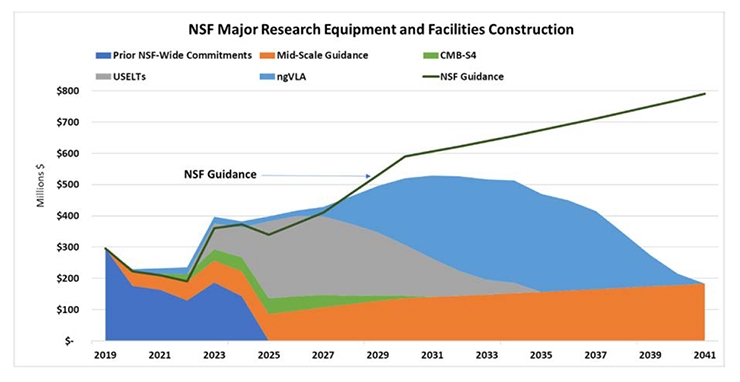 The second-highest priority for ground-based astronomy is for NSF to co-fund the relatively inexpensive Cosmic Microwave Background Stage-4 experiment with DOE, and for NSF to fund design and cost studies and prototyping for the next-generation Very Large Array (ngVLA), a potential replacement for the aging Jansky Very Large Array and the Very Long Baseline Array radioastronomy facilities. Toward the end of the decade, the survey recommends starting construction on ngVLA “if these studies are successful, and if budgets allow.”

Explaining its position, the survey states that it is “of essential importance” to replace the current radioastronomy facilities with ones that are more sensitive by about an order of magnitude and can image radio sources at centimeter-to-millimeter wavelengths on scales of arcminutes to factions of a milliarcsecond. It notes that ngVLA would fit that need and be “absolutely unique worldwide,” but also that it is still “immature in its development” and has a $3.2 billion price tag, 75% of which would be covered by NSF.

The survey suggests that design studies seek to reduce the project’s costs without an unacceptable impact on its science goals. It also notes that the survey’s mid-decadal review will be an opportune time to revisit the outlook for the project.