The Melba Phillips papers (spanning from 1922 to 1999) is the latest archival collection to be digitized and is now accessible to researchers in the Niels Bohr Library & Archives’ online digital repository. We are very excited to provide easier online access to this fascinating collection that provides a glimpse into the life of physics educator Melba Phillips. Read on to learn more about Phillips and some of the items of interest from this collection.

Melba Phillips was born in Hazelton, Indiana on February 1, 1907. By 1926, she had earned a bachelor’s degree in mathematics from Oakland City College of Indiana, and in 1928 received a master’s degree in physics from Battle Creek College in Michigan. In 1933, Phillips received her doctoral degree in physics from the University of California, Berkeley, where she was one of the first doctoral students supervised by J. Robert Oppenheimer.

Phillips left Berkeley in 1935 and held temporary positions for the next three years at Bryn Mawr College, the Institute for Advanced Study, and the Connecticut College for Women before obtaining a long-term faculty position at Brooklyn College in 1938, and a part-time position at the Columbia University Radiation Laboratory in 1944. In 1952, Phillips lost both jobs for refusing to testify before the U.S. Senate’s Internal Security Subcommittee (also known as the McCarran Committee) which investigated alleged communist activities. For several years after, Phillips remained unemployed, but used her time to co-author two textbooks: Classical Electricity and Magnetism (1955) with Wolfgang K. H. Panofsky and Principles of Physical Science (1957) with Francis Bonner.

The next stage of Phillips’s career began in 1957 when Edward Condon appointed her associate director of Washington University’s Academic Year Institute, a teacher-training institute. She left Washington University in 1962 to work at the University of Chicago, where she remained until her 1972 retirement as Professor Emerita. Even after her official retirement, Phillips continued to work, serving as a visiting professor at both the State University of New York, Stony Brook (-1975), and the Graduate School of the University of Science and Technology, Chinese Academy of Science, Beijing (1980). 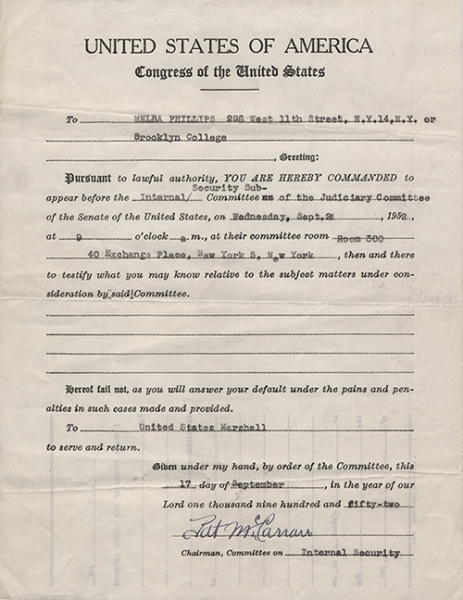 This collection of papers is comprised largely of personal and professional correspondence between Phillips and her family, friends and colleagues, with a few other miscellaneous items in the second series, including report cards, speeches, and clippings. One item of interest from the collection is the 1933 booklet from the University of California Appointment Secretary that contains Phillips’s educational information and a series of employment recommendation letters written by professors who had worked with and knew Phillips as a student, including J. Robert Oppenheimer. In his letter, Oppenheimer wrote that Phillips  “had a genuine vocation for mathematics and theoretical physics, and an outstanding talent for it,” whom he recommended “as a valuable member of any university physics department in the country” (Box 1, Folder 1).

Spread throughout box 1, folder 1 is material related to Phillips’s 1952 firing from Brooklyn College and its aftermath even decades later. Interesting to read are letters of support friends and colleagues wrote offering Phillips various means of assistance, including letters from Philip Morrison and Felix Bloch. There is also the text of a talk Phillips gave at an American Physical Society meeting in 1978 called “Studying Physics in the Thirties – a Personal Recollection,” in which she discusses her educational background and what it was like being a female physics student at that time (Box 1, Folder 2).

To learn more about Melba Phillips, including other resources by and about her, view her Physics History Network profile here.