How Science Celebrities Are Born

How Science Celebrities Are Born

October is the month during which the Nobel Prize Awards are announced. This 121 year old tradition has been observed since the awards were established in 1901, following the will of Swedish inventor and businessman Alfred Nobel. After the names of laureates are publicized, several celebratory events occur during the Nobel Week in December. It is during this time when the laureates, the awarding committees, and other guests meet to participate in the Nobel Prize Award Ceremonies. Today, it is easy to see how the Nobel laureates are celebrated all around the world. We can “witness” the ceremonies through the live streams on the NobelPrize.org website, on the news, in video recordings, and on social media, but how have the ceremonies been conducted in the past?

For the October Photos of the Month, I decided to explore and see what we can find in the Emilio Segrè Visual Archives about these award celebrations. Before I share with you what I have found there, I want to highlight the photos of the 2022 winners of the Nobel Prize in Physics that we have at the archives. This year, Alain Aspect, John F. Clauser, and Anton Zeilinger received the Prize for “for experiments with entangled photons, establishing the violation of Bell inequalities and pioneering quantum information science”. 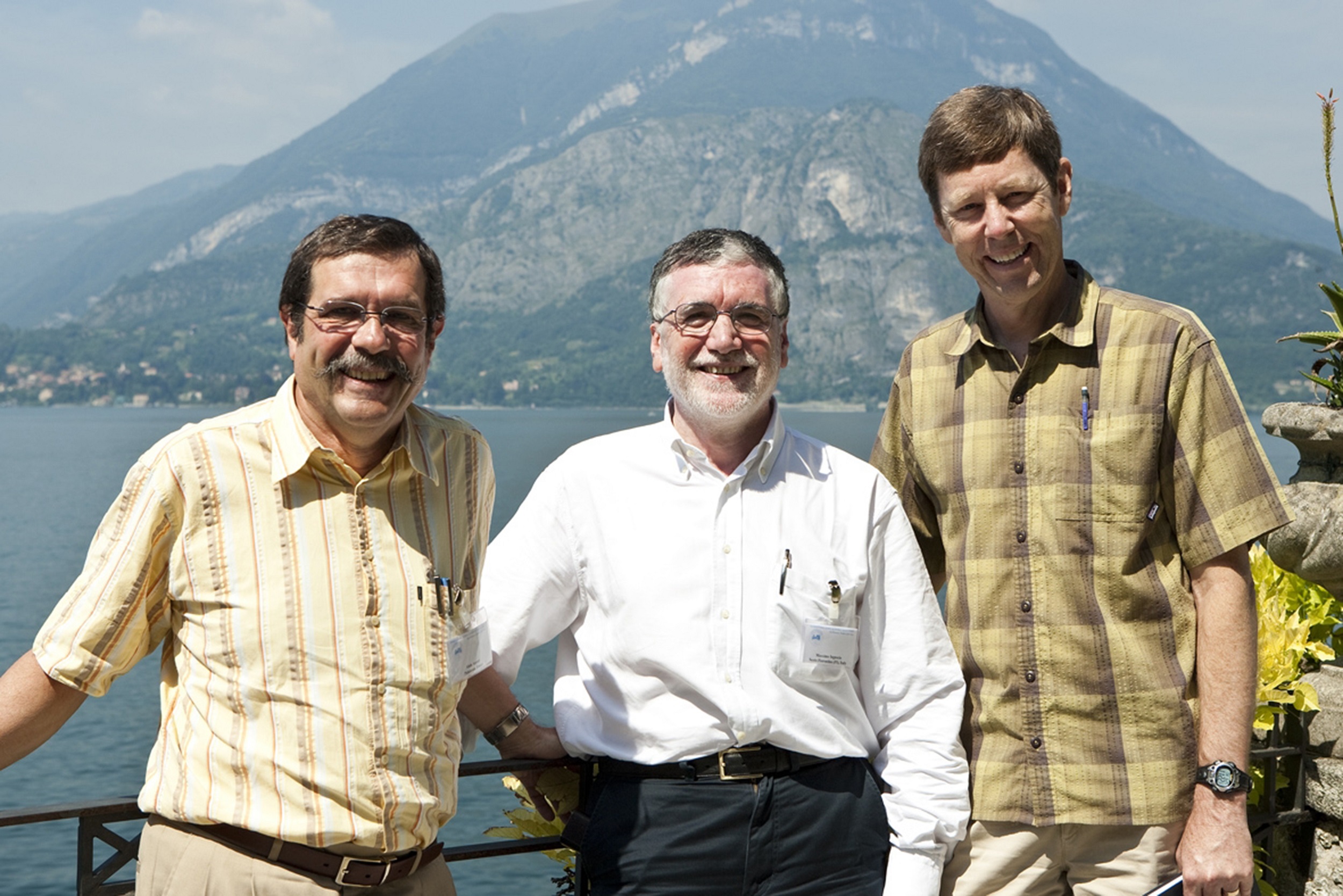 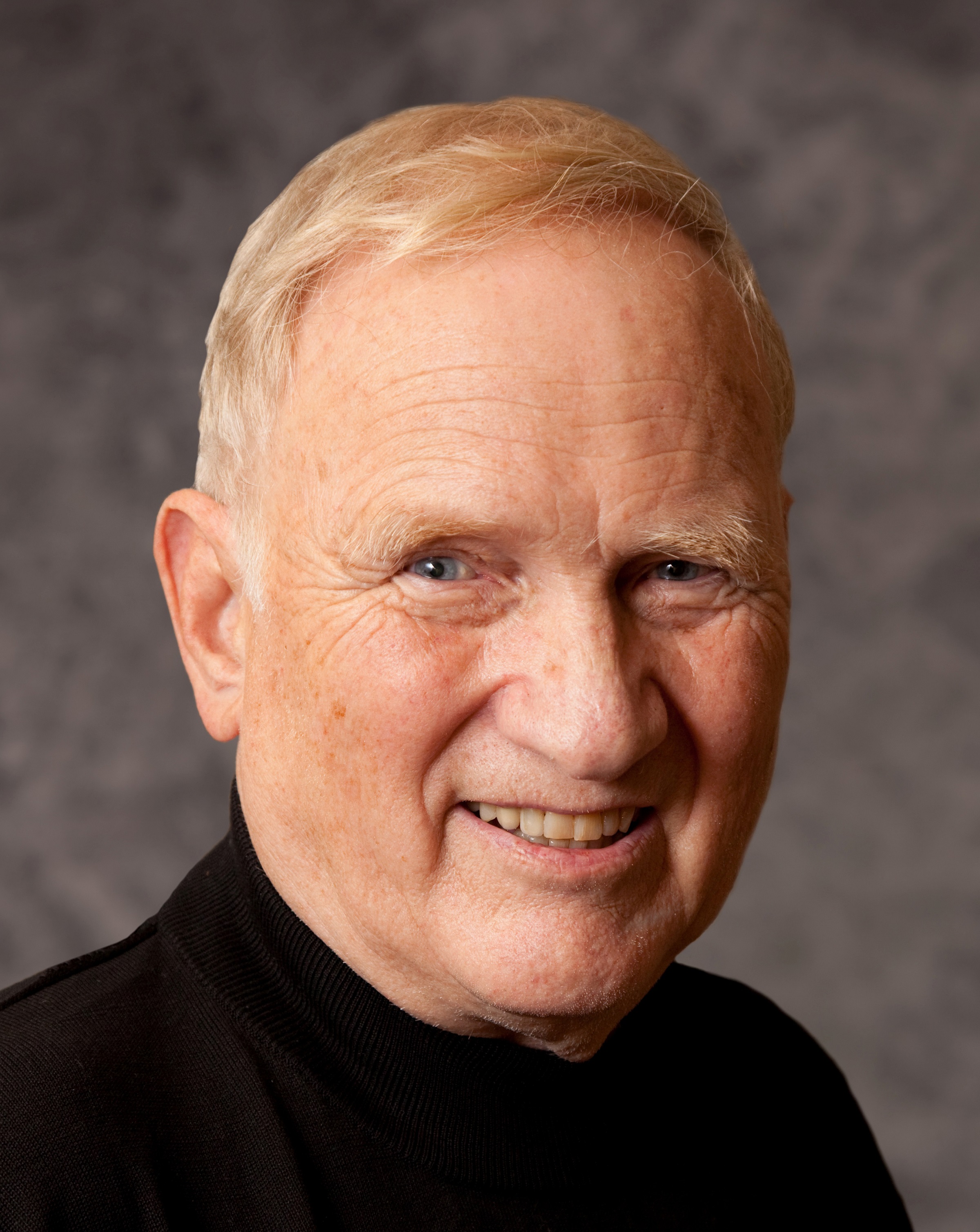 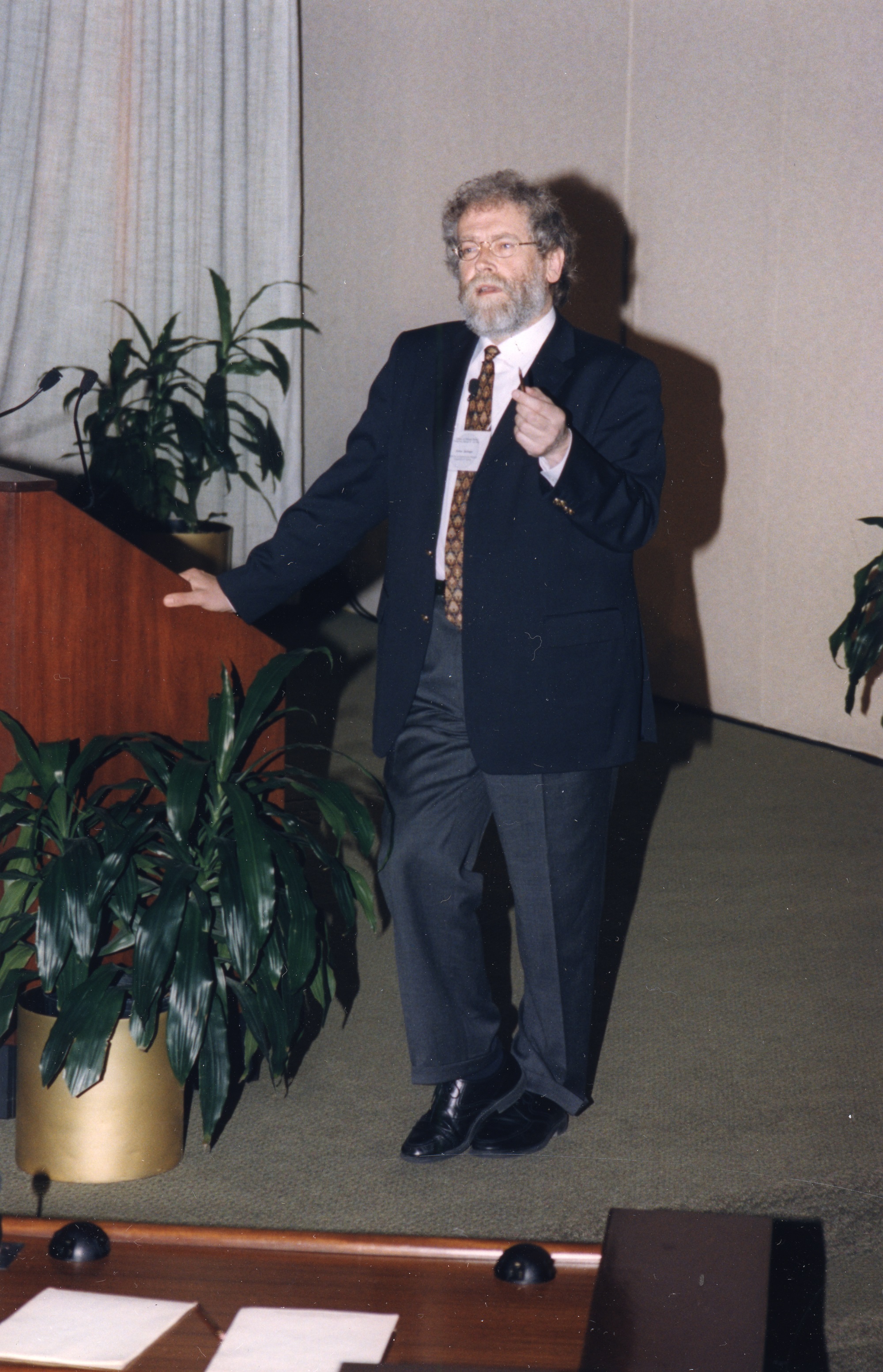 I found several photos showing different moments of the Nobel Prize celebrations, each displaying their special atmosphere, where progress in science research and work in the field of social justice and peace between nations are all highly honored.

Traditionally, the most spectacular moments happen during the Nobel Prize Ceremonies. The laureates in Physics, Chemistry, Physiology or Medicine, and Literature receive their awards from the King of Sweden in Stockholm, and the Nobel Peace Prize is awarded in Oslo, from the Chairman of the Norwegian Nobel Committee, in the presence of the King of Norway. An additional prize in Economic sciences, established in 1969, is also presented at the ceremony in Stockholm.

This image from the Emilio Segrè Visual Archives presents Queen Silvia (second from left) and King Carl XVI Gustaf of Sweden, participating in the award ceremony in 1976, the year when Samuel Ting and Burton Richtershared shared the prize in Physics for the discovery of the J/ψ meson nuclear particle. 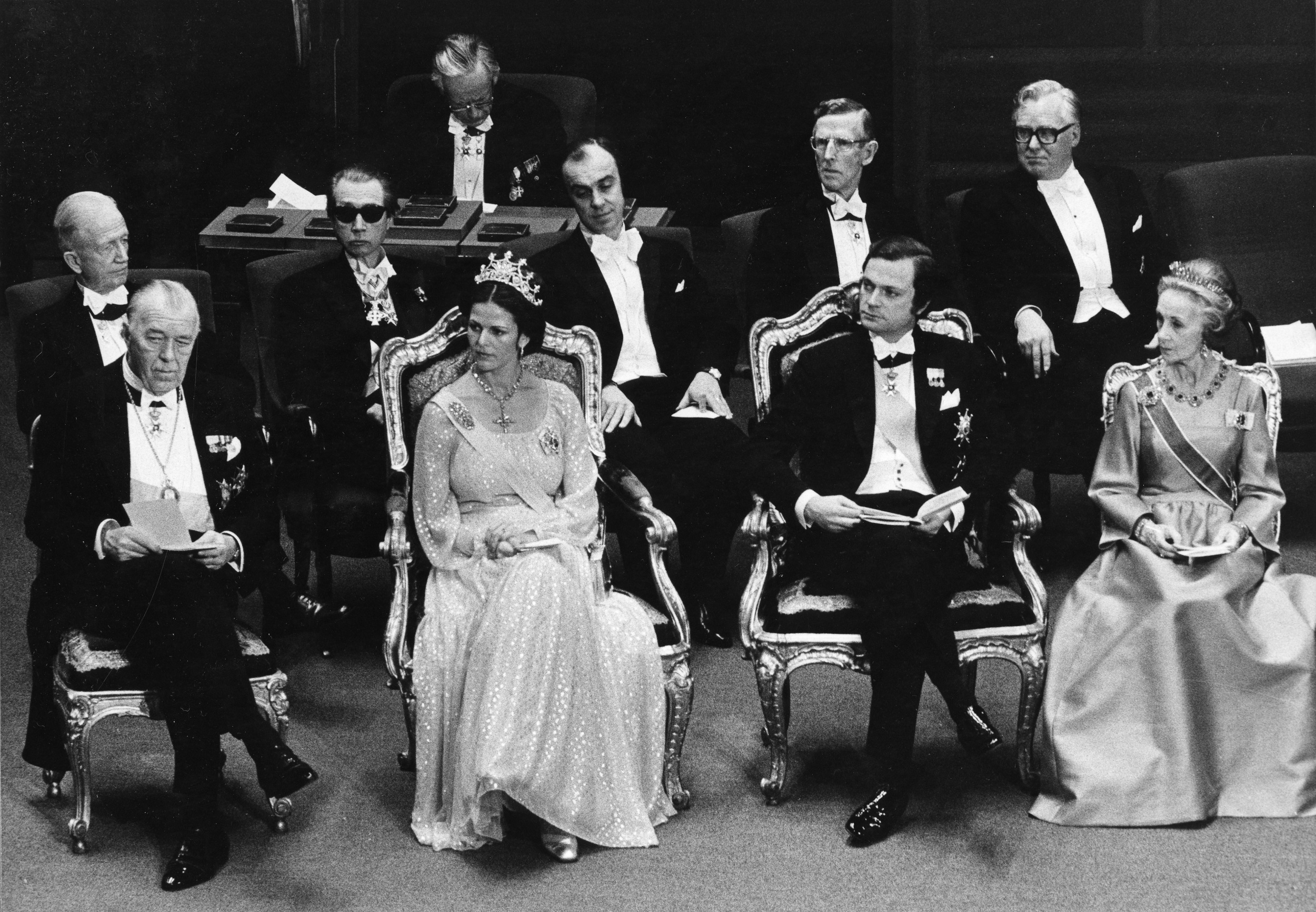 The Medal, the Diploma and Monetary Award

Each laureate receives a gold medal and diploma from the King of Sweden. Below is a photo of the medal presented to Walter H. Brattain, William Shockley, and John Bardeen in 1956 for their work on semiconductors and the discovery of the transistor effect. 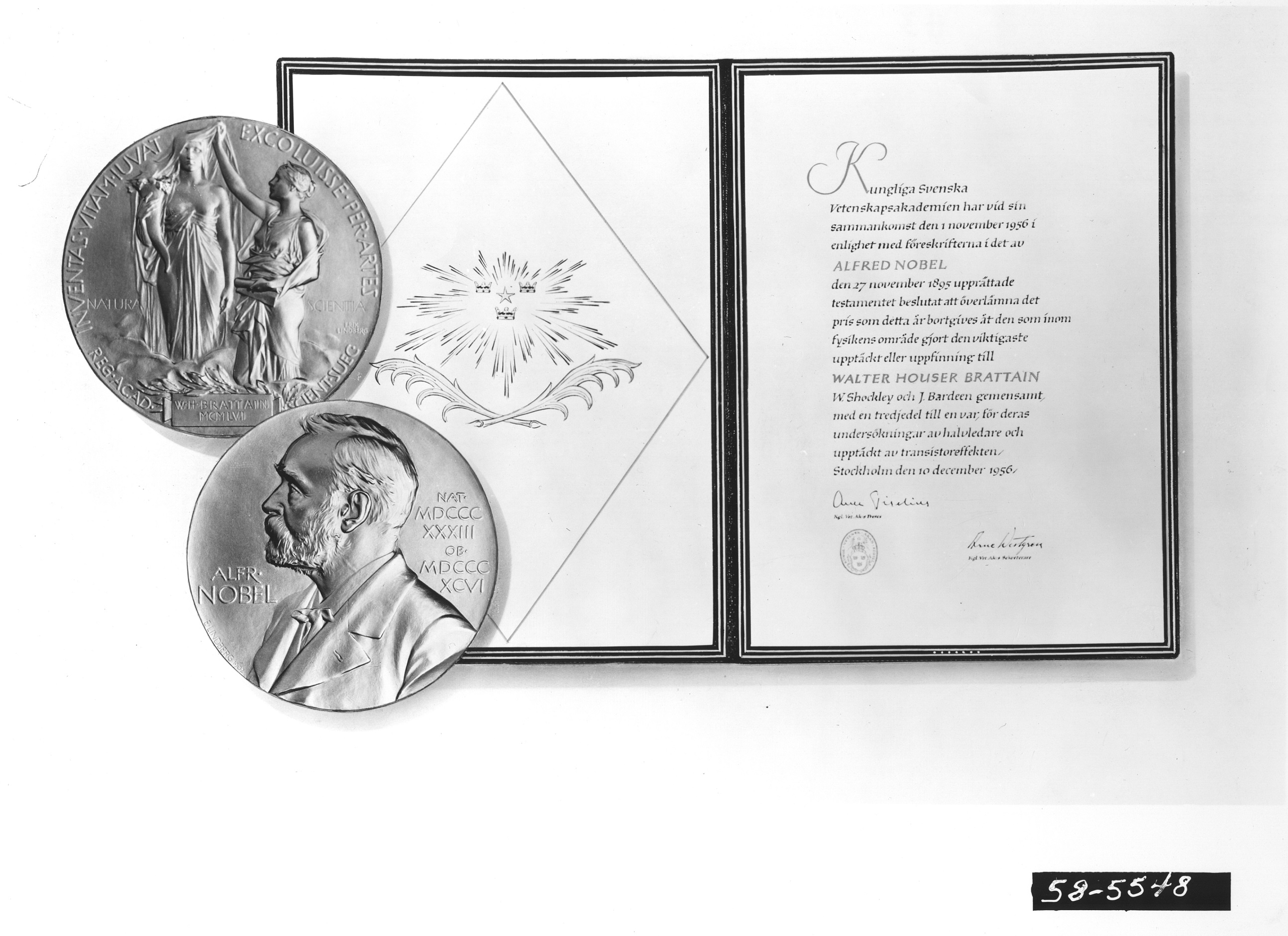 The diplomas are designed by Swedish and Norwegian artists and the monetary award is distributed annually. In 2022, it is 10.0 million Swedish krona, or about $900 thousand US dollars per full Nobel Prize. The awards are presented annually at a ceremony on a very special date, December 10th, which is the anniversary of Alfred Nobel's death. Among the photos in our collections, there is one on which the King of Sweden Gustaf V (right) presents the Nobel Prize diploma and medal to Enrico Fermi (left) in 1938. Fermi received the prize for "demonstrations of the existence of new radioactive elements produced by neutron irradiation, and for his related discovery of nuclear reactions brought about by slow neutrons". 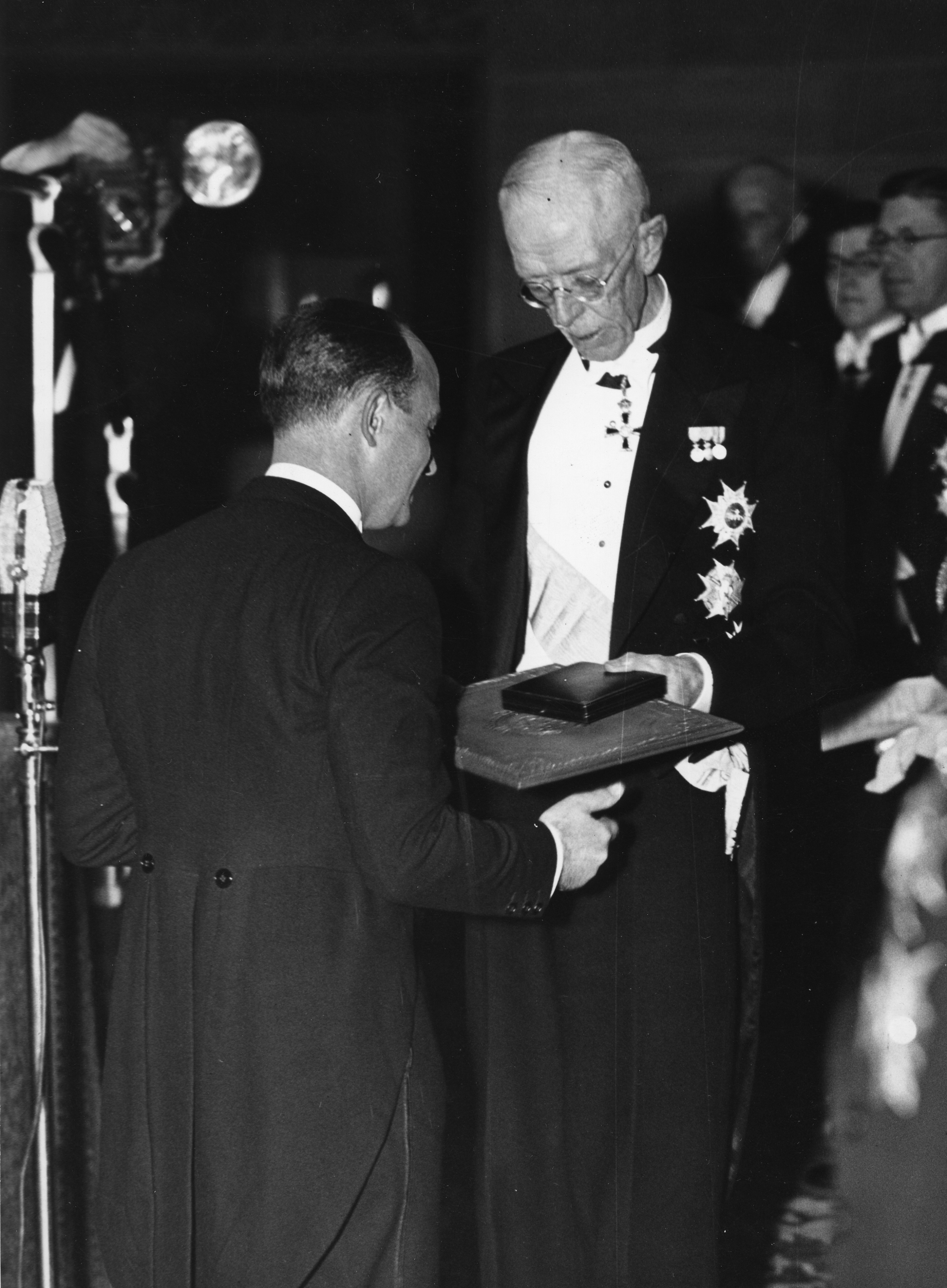 The Stage, the Banquet, and the Dress Code

In this photo from the 1976 award ceremony in Stockholm below, all of the recipients, the awarding committee, and the Royal family are set on the stage where the laureates are called to accept their prizes. A few days earlier in December, the Nobel lectures are given by the laureates, in which they share the paths of their research, their discoveries, or writing of their literary works. 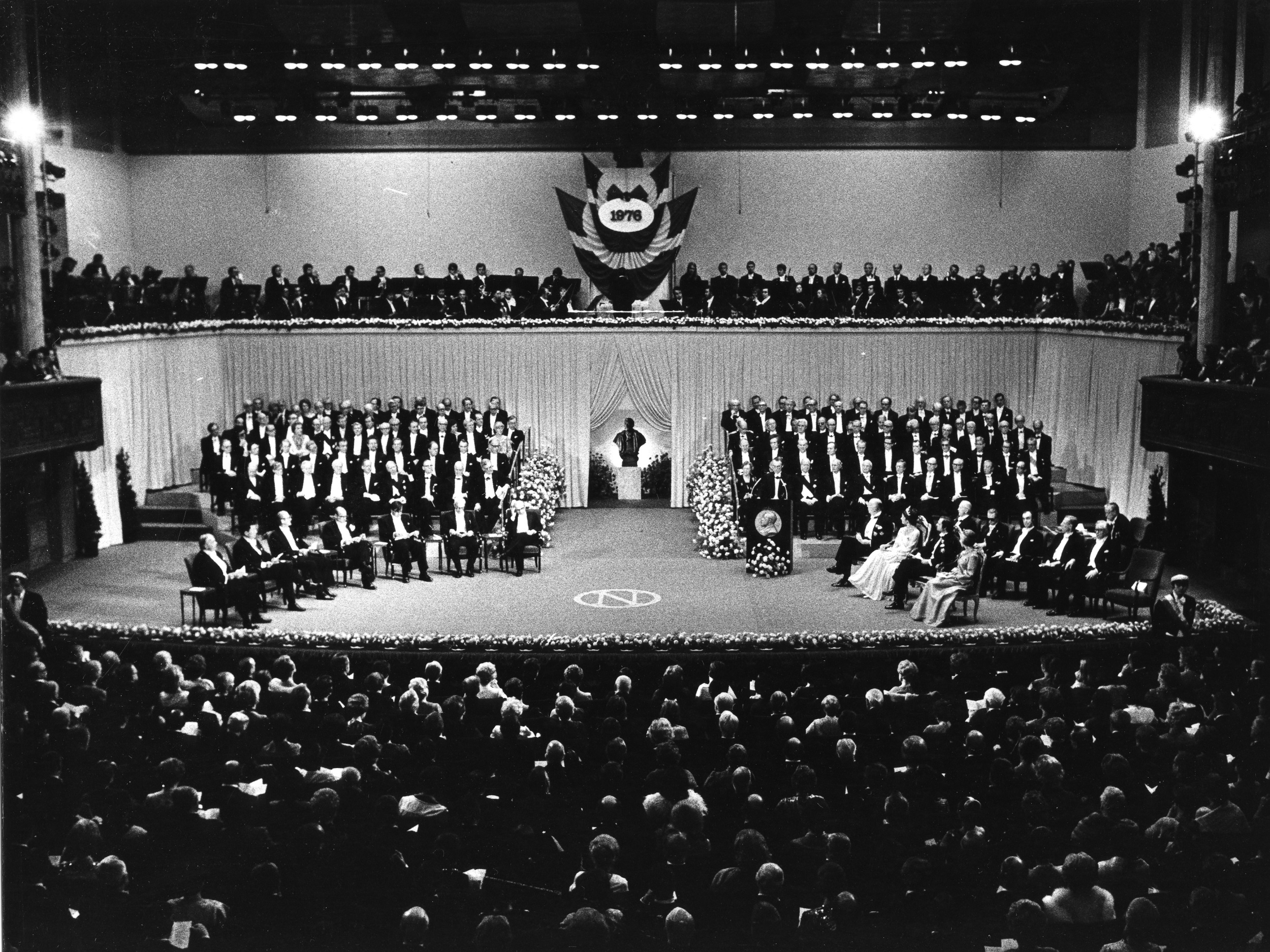 This has happened many times but not in 2020 and 2021, due to the COVID-19 pandemic. In the past two years, the Nobel Prize laureates received their medals and diplomas in their home countries and only the award ceremonies were streamed from the Stockholm City Hall. On December 10, this year, the laureates from 2020, 2021, and 2022, will all gather for the full Nobel Prize Ceremony and Banquet.

In the photo below is the Nobel Prize Banquet of 1976, where the laureate in physics, Samuel Ting, is among the guests. 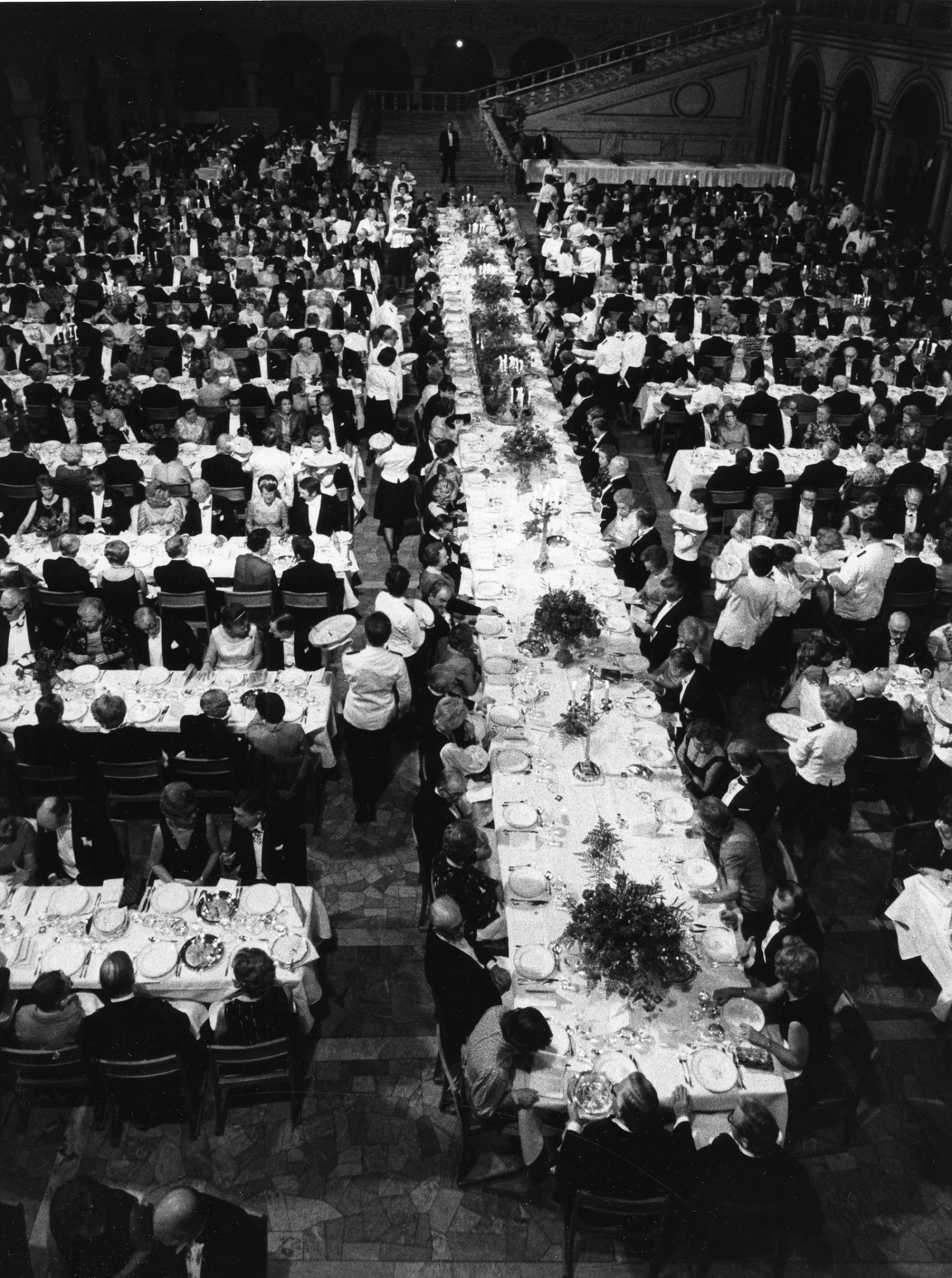 Formal dress code is a must at the Nobel Prize Award Ceremony, the Banquet, and the Ball held after it. Our visual archives hold photos of laureates and their spouses, as well as group portraits of the scientists at the ceremony. All gentlemen wear white ties and tails, and all ladies are dressed in evening gowns. (For more details on dress code you may visit the Nobel Prize website.) It goes without saying that these events are by invitation only. In the photo below are Luis Alvarez (top row, center) and his wife Jan Alvarez (bottom row, center), together with the families of other laureates at the Nobel Prize Ceremony on December 10, 1968. 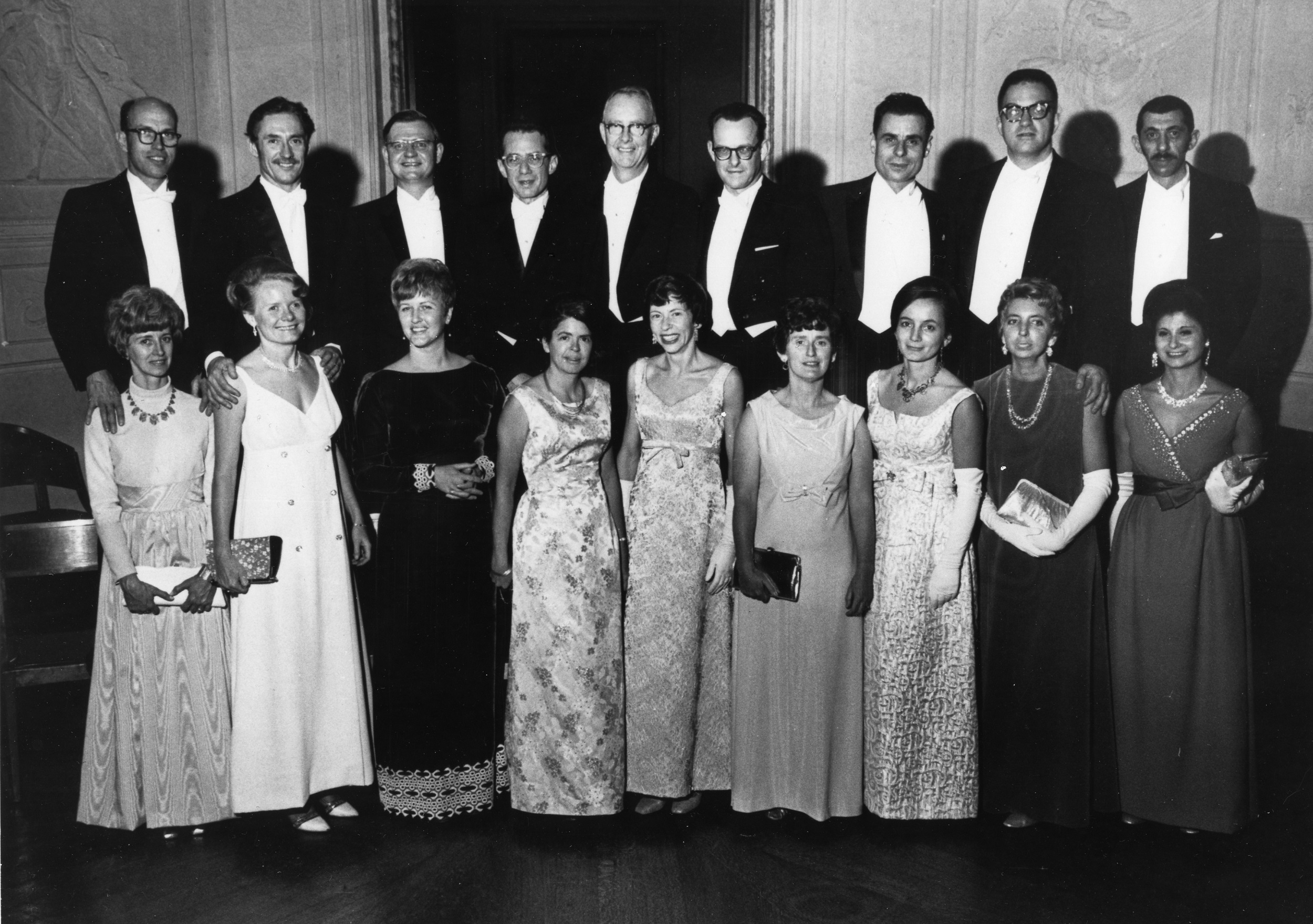 As is typical for the science gatherings, group portraits are taken regularly at the Ceremony. In the photo below, all scientists are holding labels with their names, and Louis Alvarez is one of them. This is almost like tagging a person in a photo on social media today. 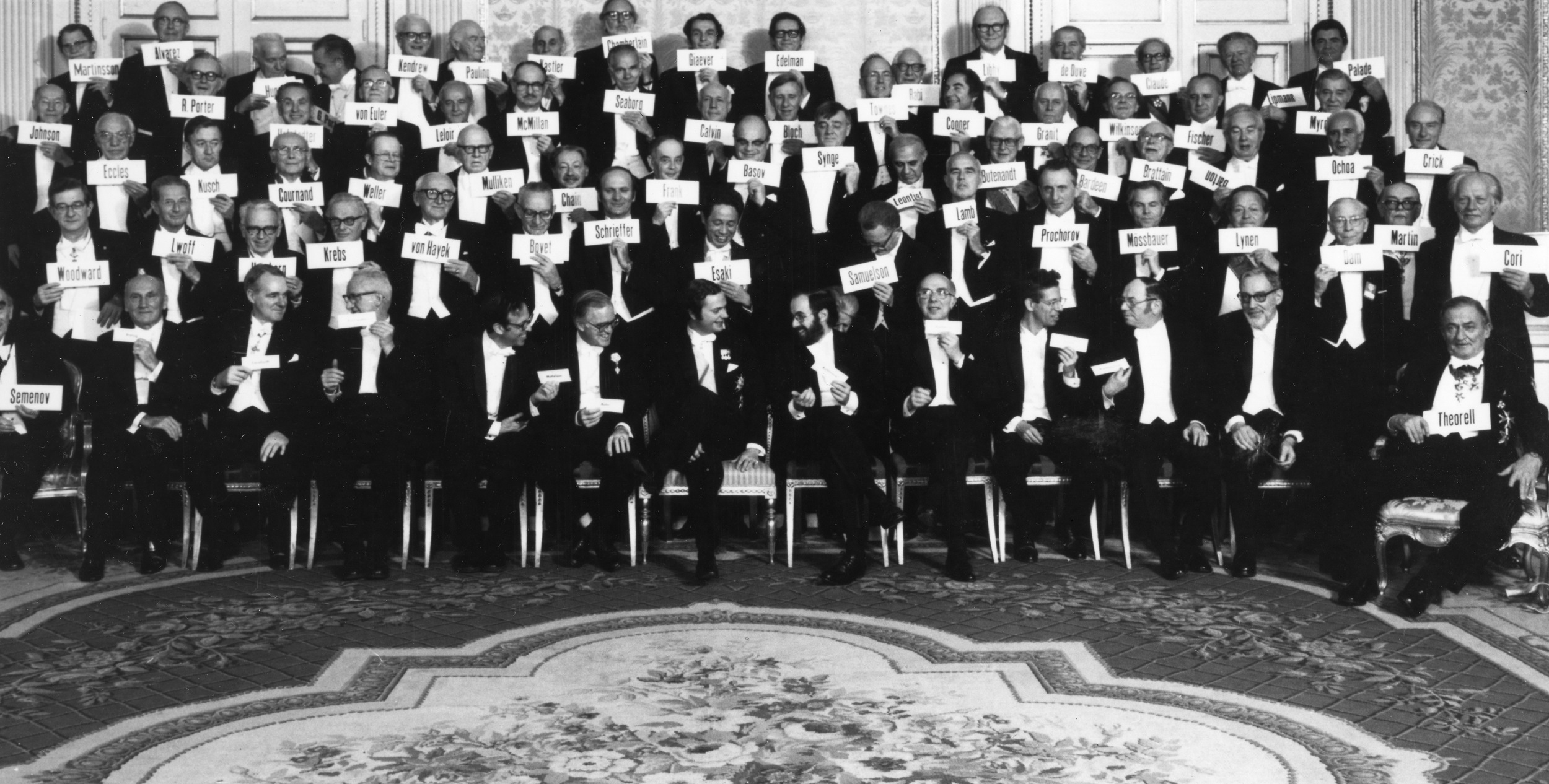 The Ball is one of the glamorous events after the award ceremony. Below is a photo of the 1959 Ball where Emilio Segrè, the Nobel Prize in Physics laureate in 1959, and his wife were present. 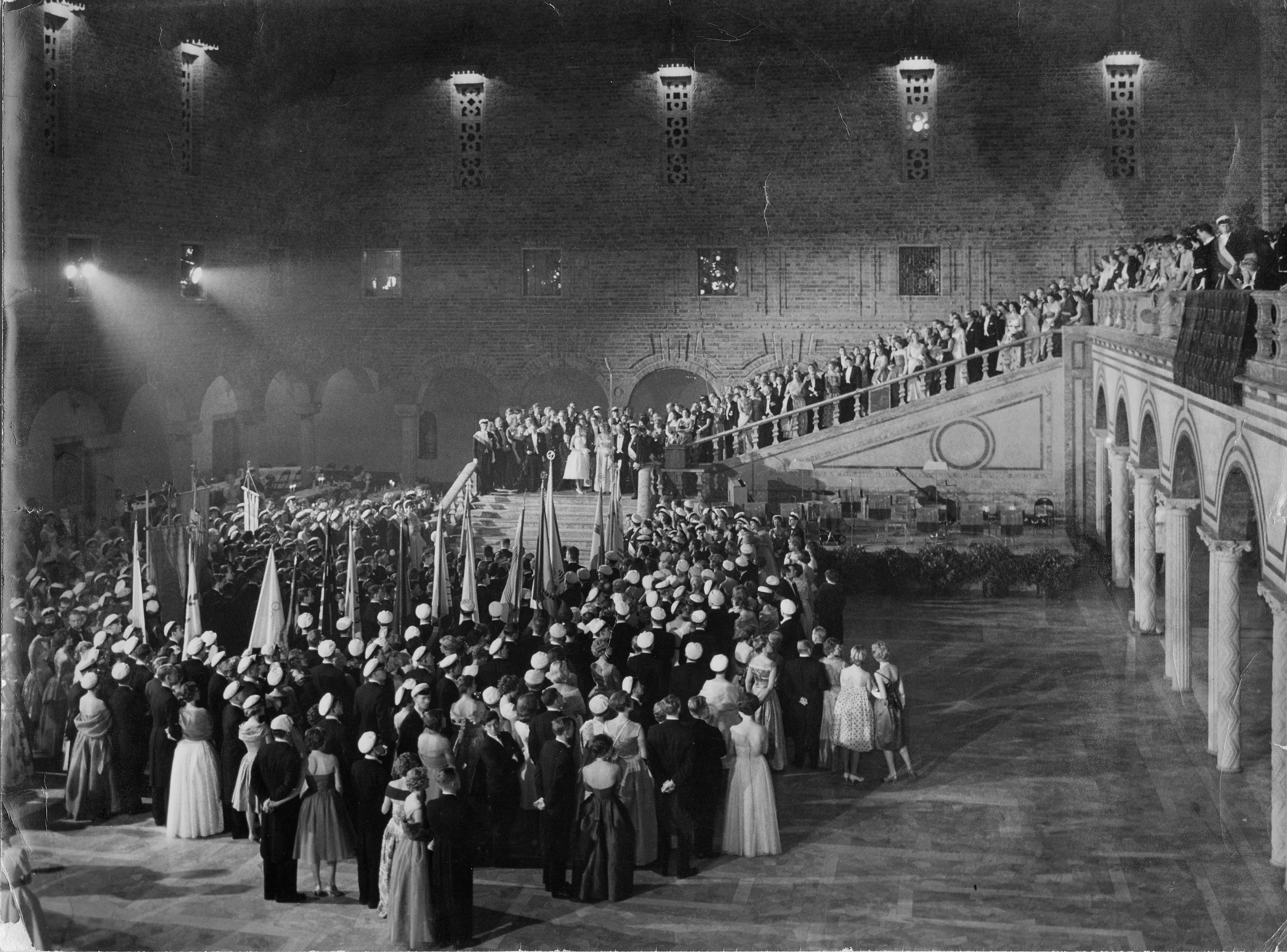 Captions: Emilio Segrè and his family are (on the landing in the center of the photograph) at the Nobel Prize Ball, December 10, 1959; Credit: Photograph by Sven Braf, courtesy of AIP Emilio Segrè Visual Archives; Catalog ID: Segrè Emilio E4

Introduced in 2005, the Nobel Prize Concert has become one of the most enjoyable events at the awards ceremony in Stockholm. Renowned guest singers, musicians, conductors, and the Royal Stockholm Philharmonic Orchestra perform at this concert. It is held at the Konserthuset Stockholm, the location of the Nobel Prize award ceremony, and is attended by the Nobel Prize laureates, Swedish Royal family, and many guests.

Beyond the celebrations in Stockholm and Oslo, the Nobel Prize recipients are honored at their work organizations. In the photo below, you can see the celebratory cake, presented  to Louis Alvarez by his colleagues at the Lawrence Berkeley National Laboratory in 1968. Alvarez received the Nobel Prize “for his decisive contributions to elementary particle physics, in particular the discovery of a large number of resonance states, made possible through his development of the technique of using hydrogen bubble chamber and data analysis.” 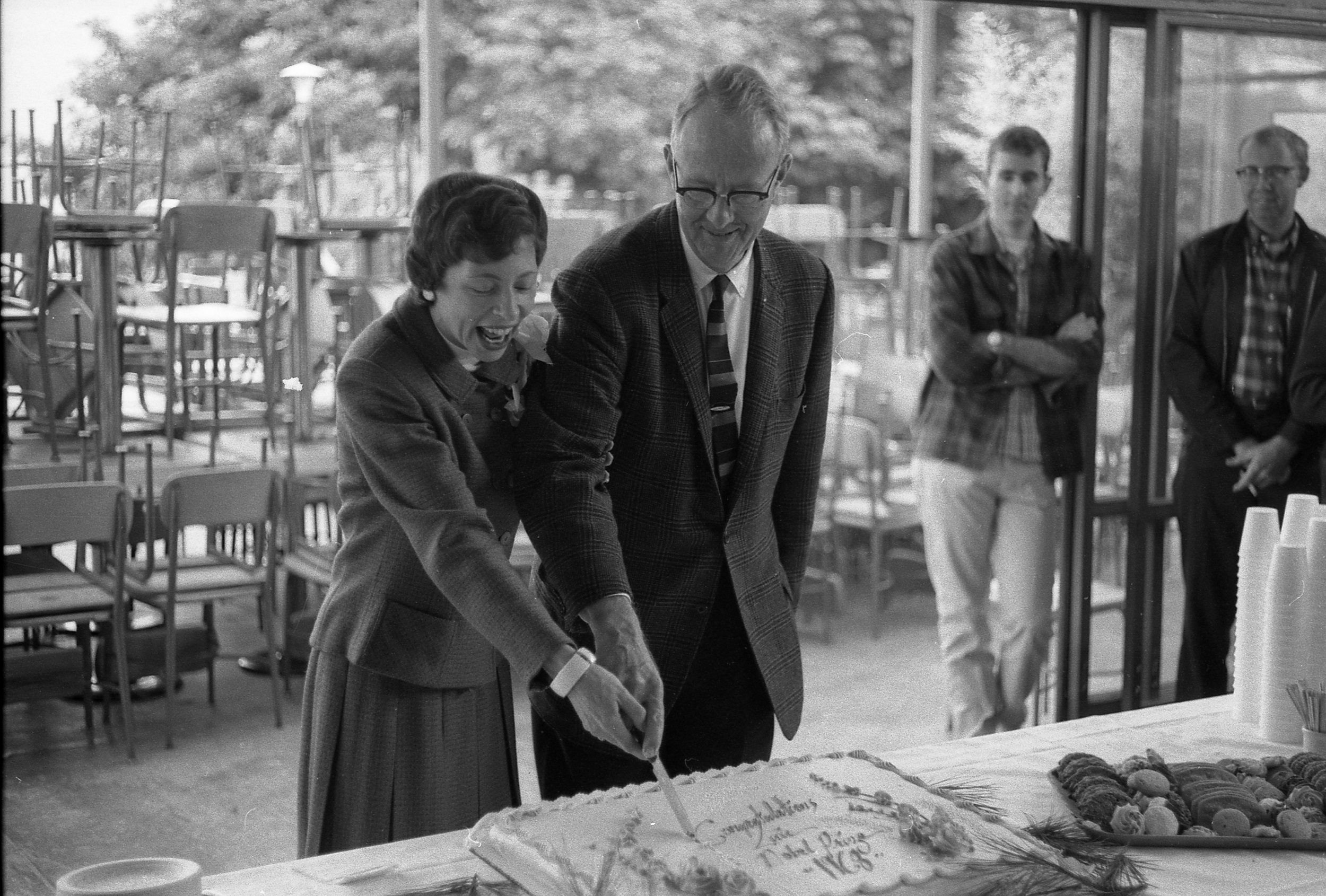 There are other events associated with these awards, in addition to those highlighted above. To explore more about them, you may look at the program of the Nobel Week in December.

These events shine a spotlight on the world of physics, which is not a field that one would normally associate with such glamor, pomp, and circumstance. After all these amazing events end, the Nobel prize laureates and the teams of scientists involved with their efforts may, in the words of Alfred Nobel, continue their tireless work for “the greatest benefit of humankind”.

Hello from Stockholm, Sweden! The king in the picture with Fermi is actually not Gustavus Adolphus but his father, King Gustaf V. He was the king of Sweden until his death in 1950.

All the best, Annelie

Thank you so much, Annelie!