Wood was born in 1868 and grew up in Massachusetts. He graduated from Harvard University in 1891 with a bachelor’s degree in chemistry, and from there began his rambles. He spent a year at Johns Hopkins University after college, allegedly to study chemistry, but already he was intrigued by the physics work being done at Henry Rowland’s lab. In 1892 he went to the University of Chicago to do a PhD, still thinking he would continue in chemistry. But Wood was dissatisfied with the chemistry teaching at Chicago, so he left and went to Germany in 1894. There Wood was drawn to physics for good, and after spending only two years in Germany, he left to spend also a brief time at MIT before finally ending up at the University of Wisconsin as an instructor in 1897. He never did finish his PhD! 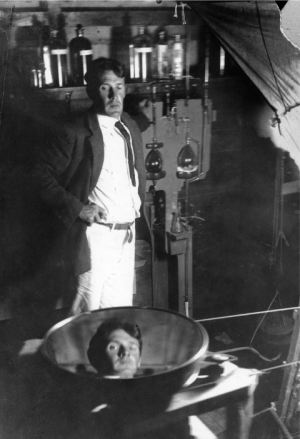 Wood spent only four years in Wisconsin. After Henry Rowland (the first professor of physics at Johns Hopkins University) died in 1901, Wood was hired to take his place. Henry Rowland is famous for developing spectrographic gratings that were of immense importance to the development of spectroscopy. After his death, Wood took over making the gratings and even kept working on them in his retirement.

Wood had a wide variety of interests. Former student George Vinal said that Wood was “always trying something quite unusual.” Among other things, Wood discovered resonance radiation, developed studies of the Raman effect on gasses, and even built a forty-foot grating spectrograph in a barn on Long Island. Wood was something of an inventor and builder as much as a scientist, developing ultraviolet and infrared photography and new types of diffraction gratings. He was well known also for being able to cut scientific Gordian knots – that is, solving complex questions with simple solutions. Many of the scientists who knew him regarded him with a bit of nostalgia as though he were emblematic of a time when scientists could single-handedly make big discoveries with small budgets and clever thinking. 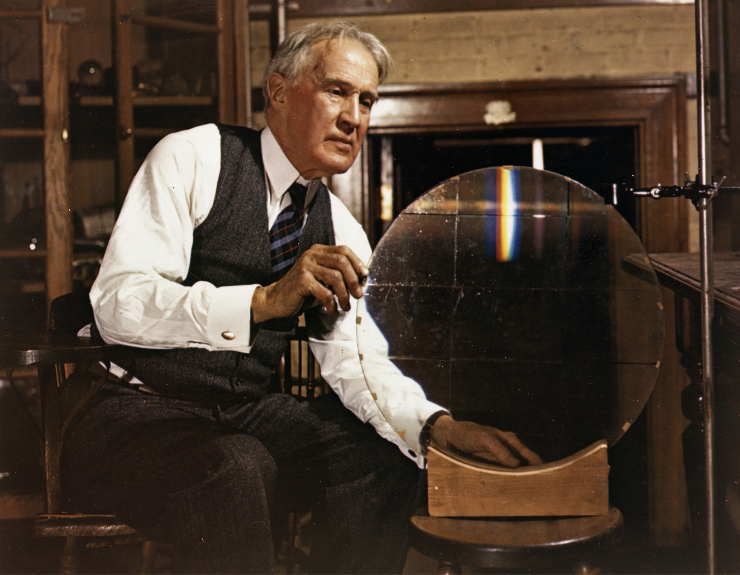 Frank Oppenheimer, who attended Hopkins as an undergraduate, was a big fan of Wood and Wood’s abilities. In his oral history he reflected on the physics department of that time:

It was a marvelous group of people [at Hopkins] — Joe and Marie Goeppert-Mayer were there. In the physics department there was Dieke, whom I saw a lot of, and Pfund, who was into all kinds of simple optical things, and Wood, who was really my hero. I remember doing something which I can't imagine a student doing now — sort of hiding in the hallway looking in, watching him work, and if Wood looked up I would move out of the way so that he wouldn't see me. He was a beautiful craftsman. 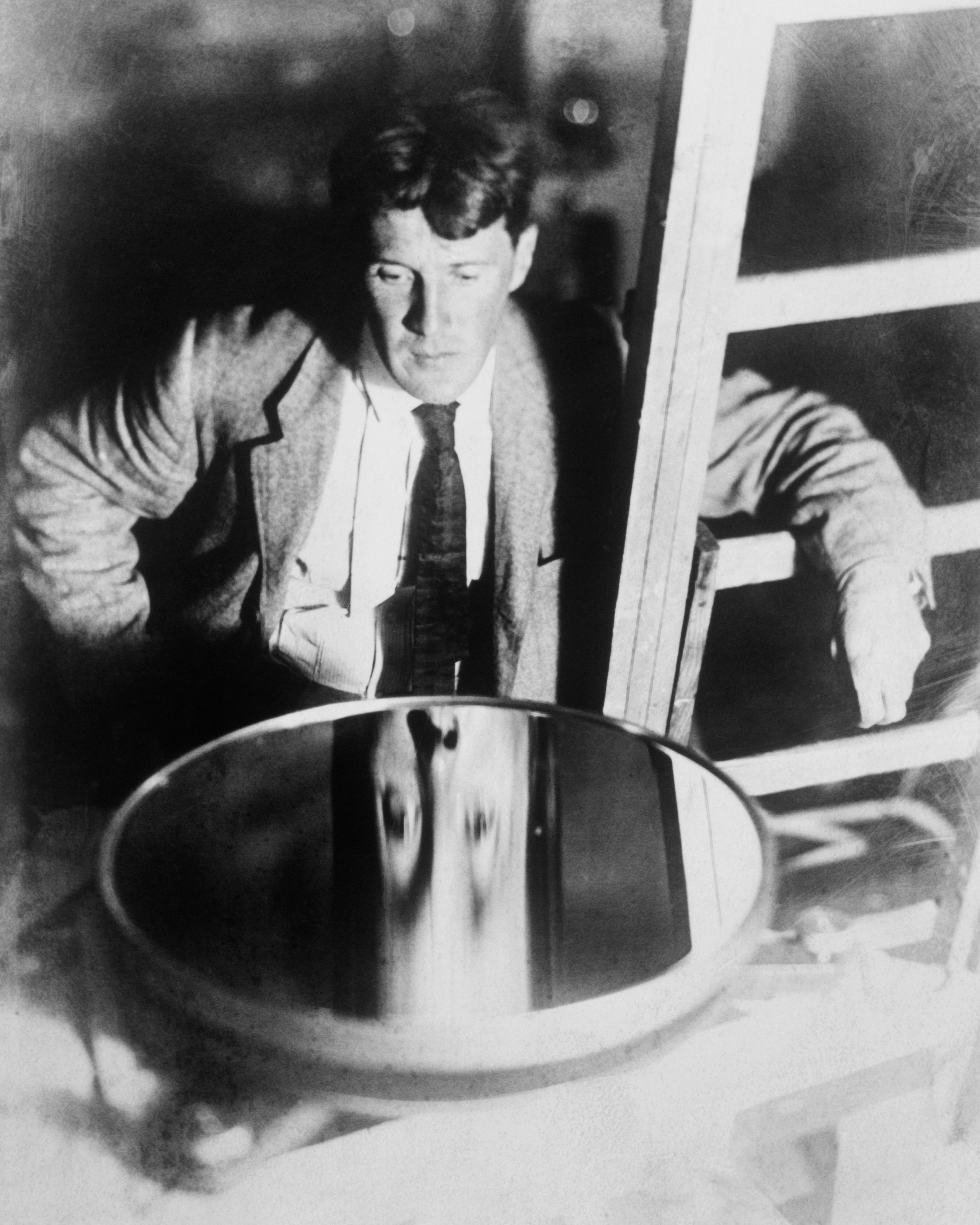 Robert Wood appears to be re-enacting Alice Through the Looking Glass but he is actually viewing a mercury mirror in rotation, showing an absence of ripples. The distortion is due to an astigmatism reverting from oblique incidence. Image credit AIP Emilio Segrè Visual Archives. Catalog ID: Wood Robert Williams F5.

In the midst of all his accomplishments, Robert Wood actually became notorious for an anti-discovery.

Robert Wood is at the bottom on the far left of this photograph of the Johns Hopkins physics department during WWII. Courtesy AIP Emilio Segrè Visual Archives. Catalog ID Johns Hopkins University E1.

At the turn of the twentieth century, the science world was still abuzz with the discovery of x-rays only a few years earlier and the possibility that even more types of “emanations” or rays could be out there waiting to be discovered. In 1903 respected physicist René Prosper Blondlot reported that he had discovered a new type of ray: the N-Ray (named after Blondlot’s city of Nancy, France). While studying the properties of x-rays, Blondlot had stumbled upon this new type of ray, which was allegedly emitted by multiple types of materials and could even disperse through the human body causing various effects. Many other physicists began studying and expanding on the properties of the N-rays, even while other physicists disputed their existence.

The main focus of criticism was how subjective the experiment was. According to Blondlot, the rays could only be seen by eyeballing the variation in the brightness of a spark. Unfortunately, how reproducible the experiments were seemed to vary from scientist to scientist and differences in the assessment of the results could be chalked up to the visual acuity of the assessor.

In 1904 the journal Nature asked Wood to go to France to investigate the validity of N-rays. At Blondlot’s laboratory Wood saw no evidence of a change in brightness in a spectrum outputted by an aluminum prism which would have indicated the presence of N-rays. Then, because the experiment took place in a darkened laboratory, Wood was able to remove the critical aluminum prism without Blondlot’s knowledge. When Blondlot continued to claim he saw a spectrum of N-rays, Wood knew the N-rays were actually No-rays. He sent his conclusions off to Nature where they were published in September 1904, and physicists largely gave up on N-rays.

By all accounts Wood was quite the character. Gerhard Dieke, in his biography for the Royal Society, called Wood both a showman and a prankster. (And offered many examples to prove it!) Wood’s biography by William Seabrook, published in 1941, is entitled Doctor Wood: Modern Wizard of the Laboratory. The dust jacket even features this rather dramatic-looking photograph of Wood: 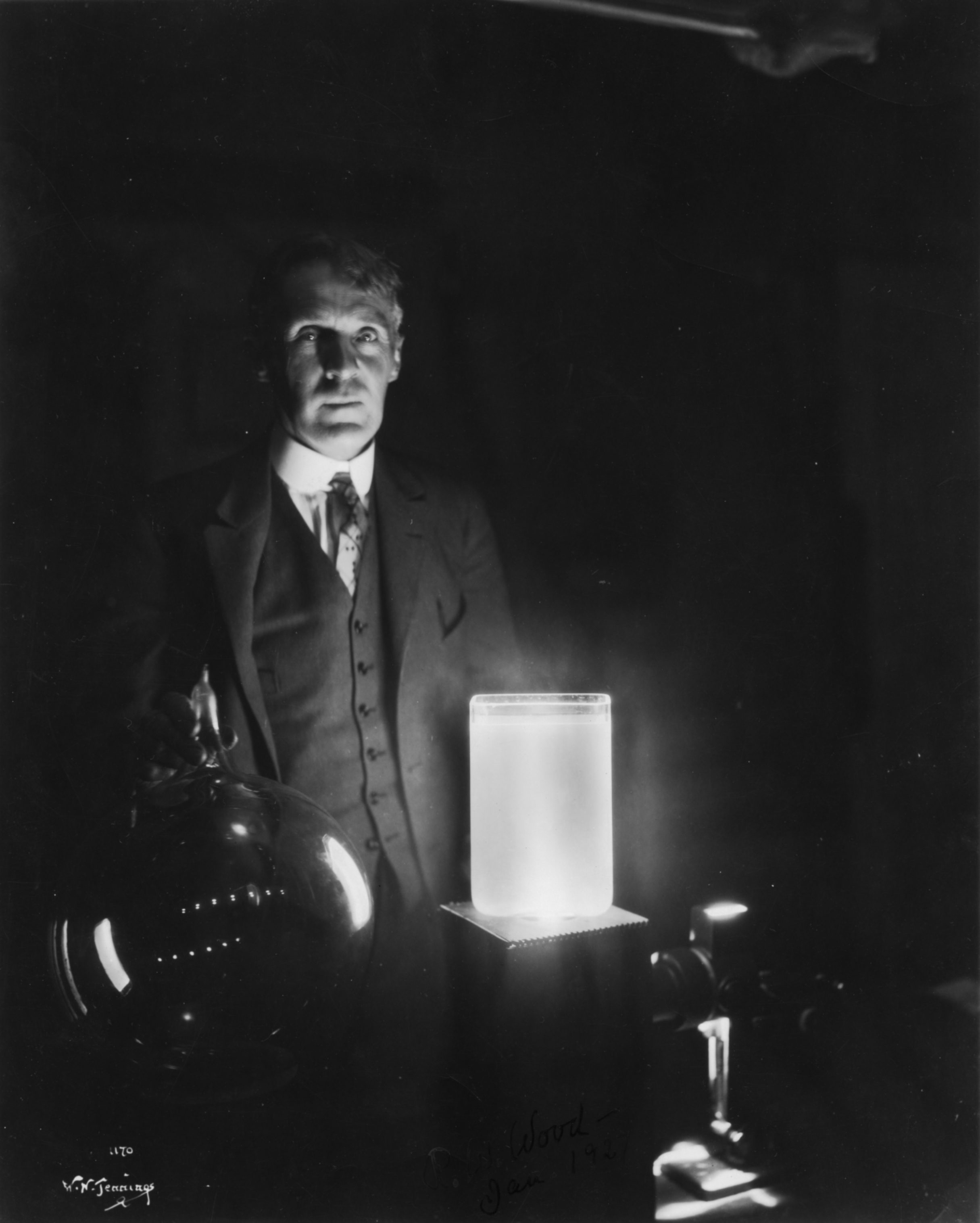 Wood is also mentioned numerous times in the Niels Bohr Library & Archives oral history collection, and it seems like everyone has a story to tell. Merle Tuve recalled of Wood:

I did some mercury resonance radiation work up in the attic and burned my eyes with ultra-violet light, wore goggles, of course, but I was using two mercury arcs in order to get very intense and focus both of them. I forgot that it would go in behind the goggles. I thought I was going to lose my sight. I called R. W. Wood up about 4 o’clock one morning told him about it. I was really worried. He said, "Oh, relax, I’ve had it happen about five times. It sure is uncomfortable, but you won’t go blind."

(AIP does not endorse burning your retinas!)

Norman Feather recalled a story which hints at Wood’s attitudes towards cars and religion:

I’d arranged to go up to London to meet Wood at the Artillery Mansions Hotel on Victoria Street, have lunch with him and be introduced to his wife, and he’d take me along to the American Embassy to get all my travel documents fixed up. So I did, and he did, and we were in Grosvenor Square and just stepping off the pavement to go across to the embassy, and an Austin 7 came around the corner. He jumped back and he said, “Gee — there’s nothing more disrespectful to humankind than to be run down by Austin 7, unless it is to be converted by a child evangelist”!

And David Rittenhouse Inglis suggested that Wood maybe even spilled the beans about the atomic bomb:

I learned — particularly from R.W. Wood, who couldn’t keep a secret, and was very high in the councils of the Physical Society — that people were really taking this fission bomb business seriously. He and I discussed it.

Looking for Robert Wood in the Emilio Segrè Visual Archives, much like in the oral histories, reveals even more aspects of a man who was quite the character. One of the crucial accessories of Wood’s character seems to have been his tobacco pipe, which he is usually holding in his pictures. (See the image gallery at the bottom of the page.)

The pipe even made it into literal caricatures of Wood, as in one illustration from The Evening Star, shown in the image gallery, in which the artist has made Wood's nose and chin parallel the long thin pipe. The small poem below the drawing reads:

When Einstein bent a ray of light
The learned world emitted whoops;
But Robert – if we’ve got him right –
Has made that same ray jump through hoops.

And finally, in addition to writing numerous scientific articles, Robert W. Wood wrote two science fiction novels (The Man Who Rocked the Earth and The Moon Maker) and two books of light-hearted poetry (How to Tell the Birds from the Flowers and Animal Analogues). How to Tell the Birds from the Flowers is his most famous work of non-scientific writing and has been among my favorite works for many years. In this book (now in the public domain and available to read on Project Gutenberg), Wood compares different kinds of plants and birds in illustrations and verse.

The line drawing illustrations make, for example, the clover (plant) and the plover (bird) look very much alike. Then the following lines tell you how you can tell the two apart. As with other poems in the book, this poem uses word play and jokes about grammar and spelling.

When the plover stands on one leg, from certain perspectives it looks just like a flower with a bee perched on top. From Wood’s How to Tell the Birds from the Flowers. Public domain.

The text of the poem reads:

The Plover and the Clover can be told apart with ease,
By paying close attention to the habits of the Bees,
For ento-molo-gists aver, the Bee can be in Clover,
While ety-molo-gists concur, there is no B in Plover.

For another example, there’s a poem on the parrot and the carrot accompanied by another clever illustration. 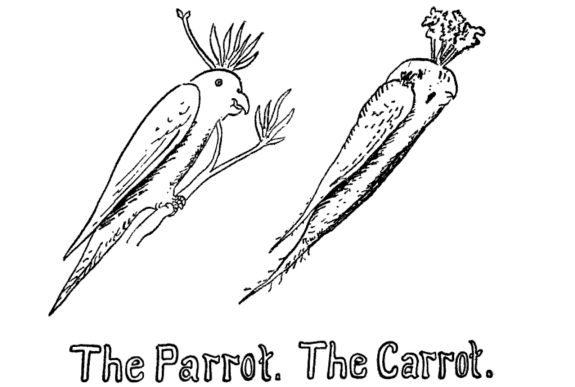 A carrot leaning over to one side looks surprisingly like a parrot perched on a branch. From Wood’s How to Tell the Birds from the Flowers. Public domain.

The Parrot and the Carrot we may easily confound,
They're very much alike in looks and similar in sound,
We recognize the Parrot by his clear articulation,
For Carrots are unable to engage in conversation.

If I were going to write a Wood-style poem about Robert W. Wood (and I wouldn’t even attempt the illustrations), it would go something like this:

The Physicist and the Poet are a similar type
They rule their lines and carry a pipe.
Separate domains divide where they have stood,
But in this case they were united in a Wood.

Wood, R. W. How to Tell the Birds from the Flowers. San Francisco: Paul Elder and Company, 1907. https://www.gutenberg.org/ebooks/159

excellent article! thanks for writing it!