This overview is the first report from the 2018-19 National Survey of High School Physics Teachers. The number of students taking high school physics in the US has reached over 1.5 million. High school teachers teaching physics is up to 27,600. Although 93% of seniors in the US attend high schools where physics is offered at least every other year, the percentage of seniors at schools where physics is offered annually dropped to 84%. A handful of states continue their trends of physics availability to their high school seniors.

US high school physics enrollment increased 12% since the previous survey was conducted in 2013, outpacing the 6%1 growth of high school seniors. The number of teachers teaching at least one physics class remained virtually unchanged during the same time period. AP Physics 1 was developed to be a first-year physics course, and the new course appears to be contributing to the increase in student enrollment in physics and the physics taking rate. 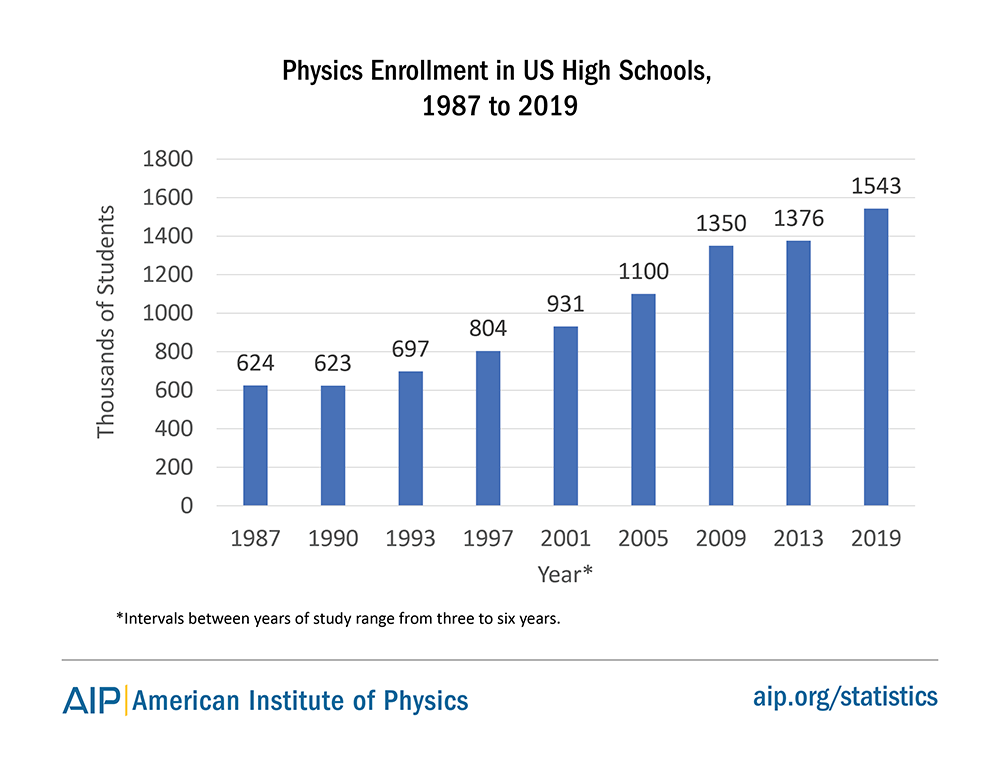 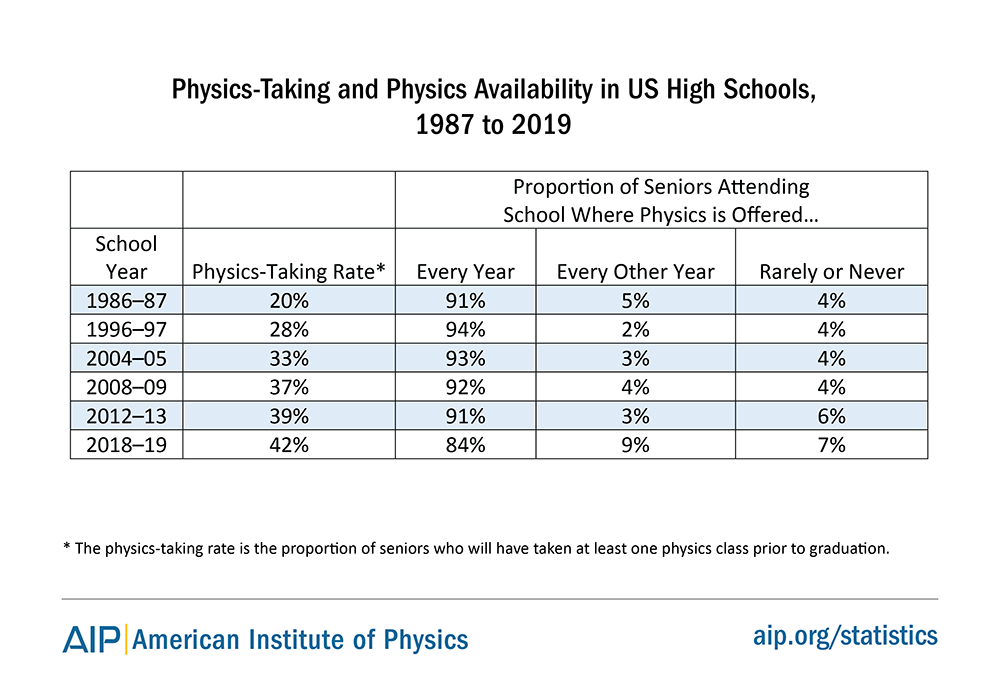 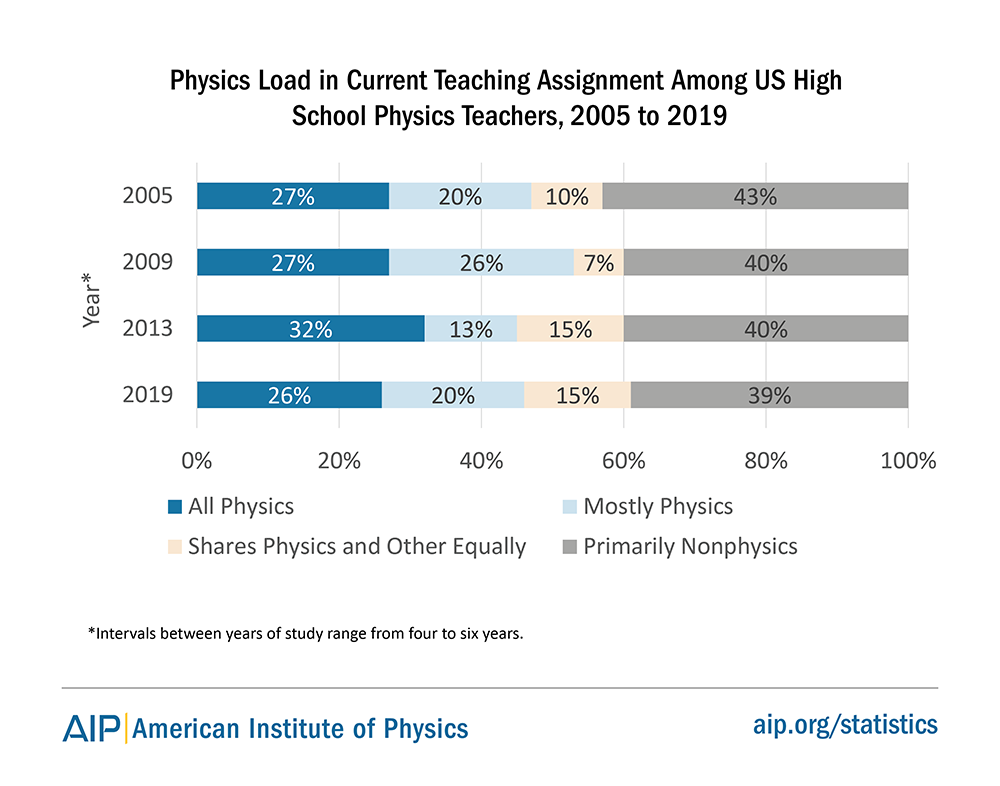 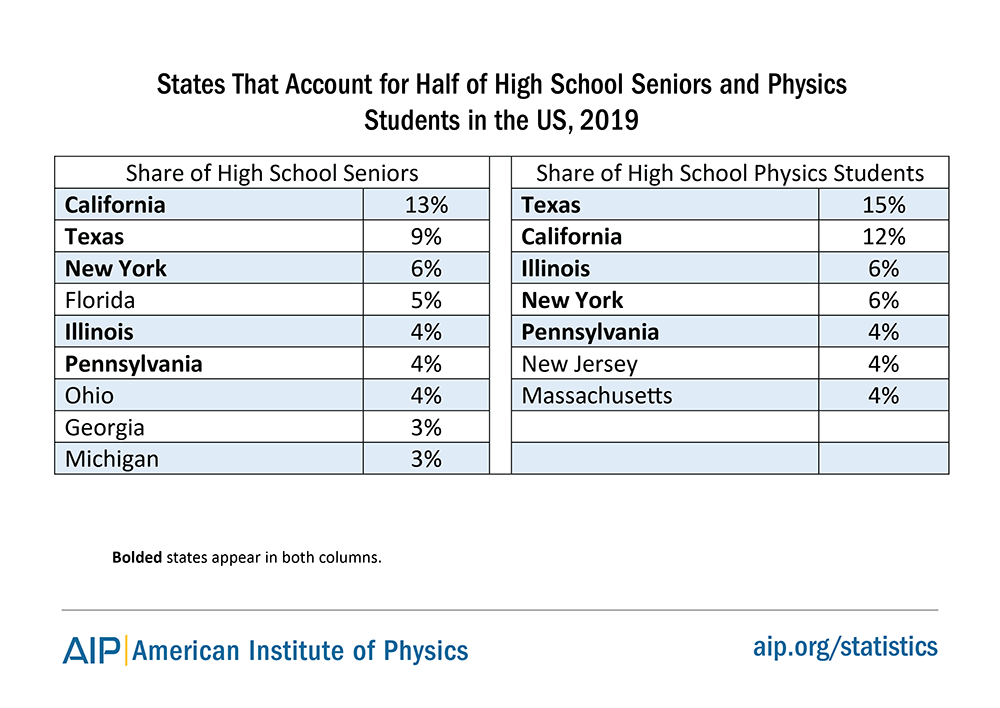 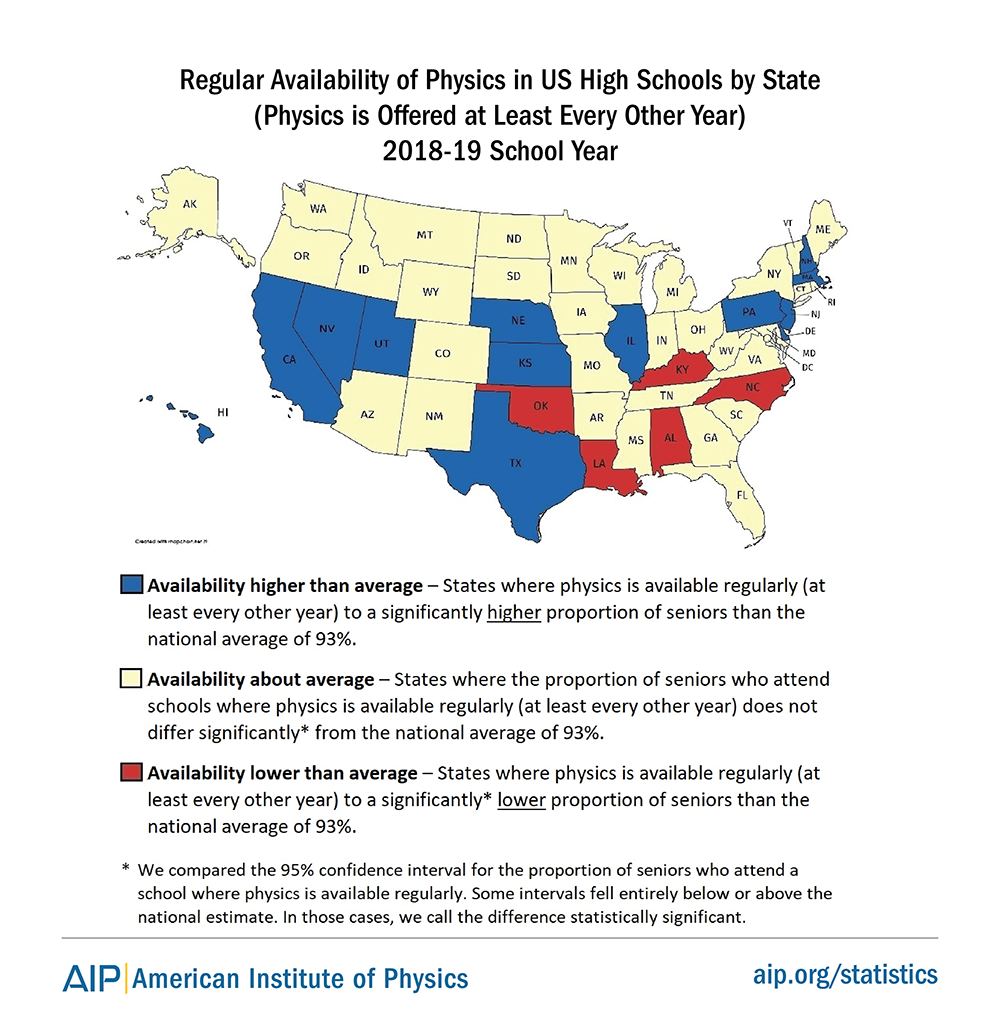 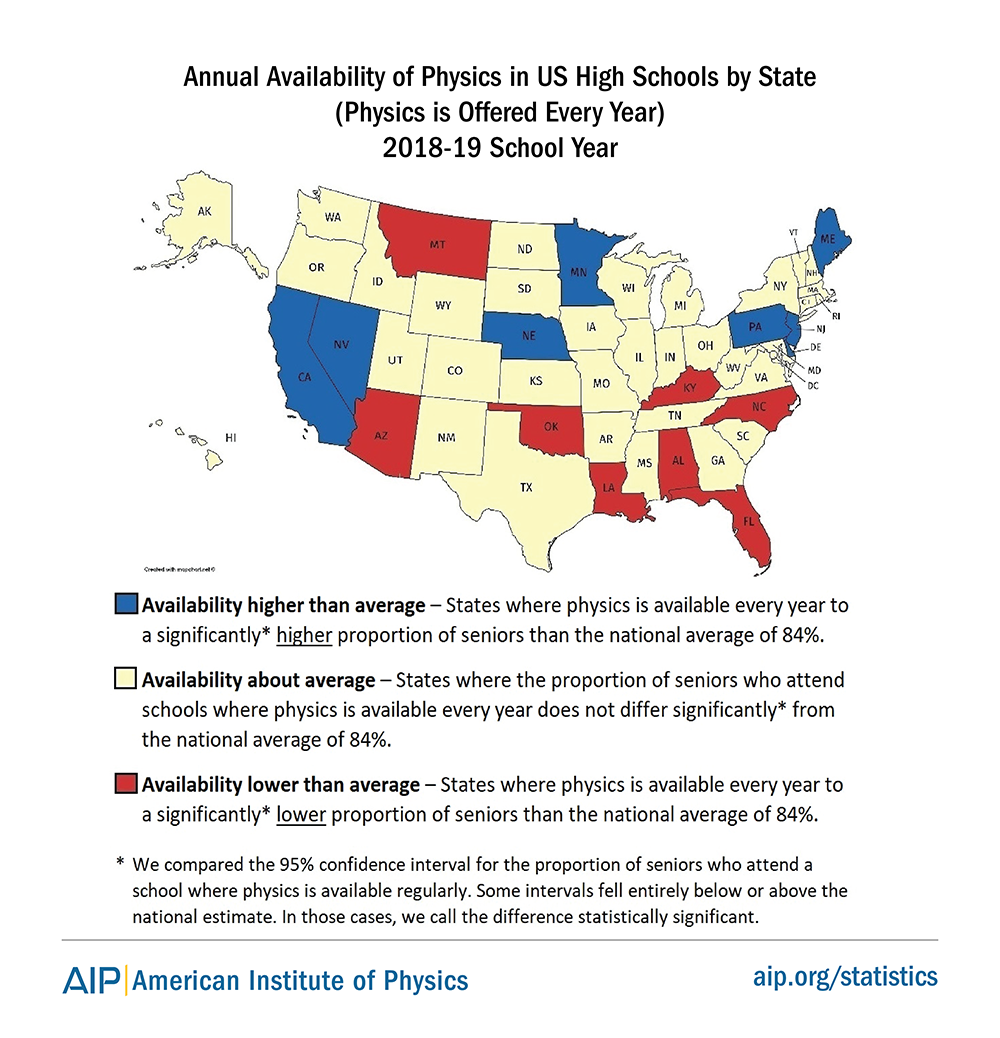 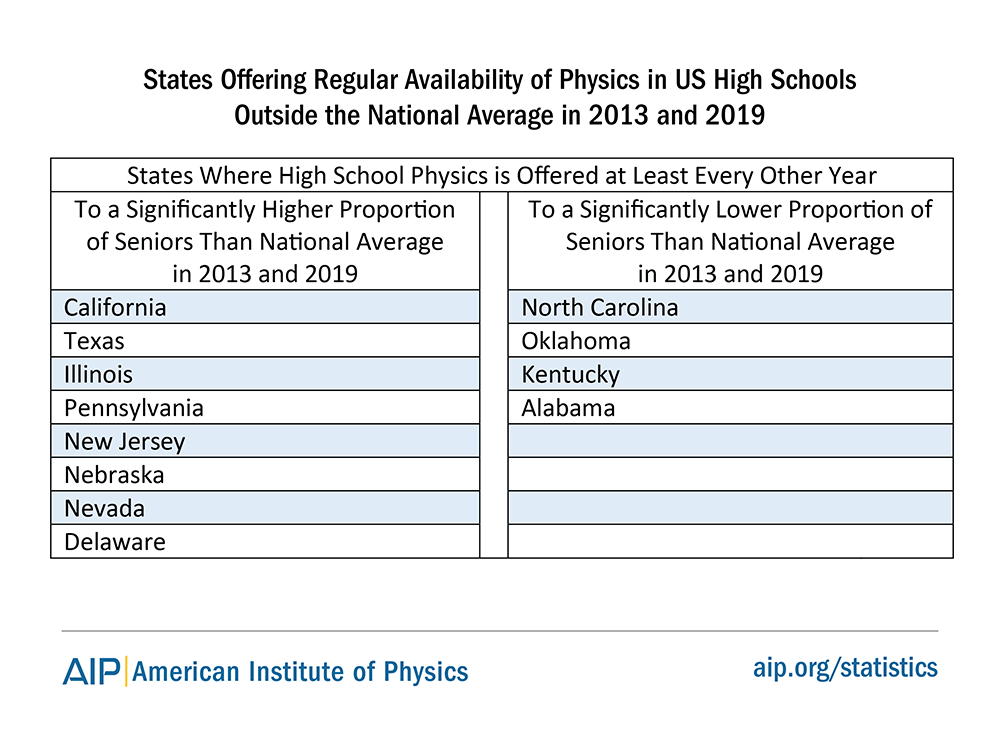 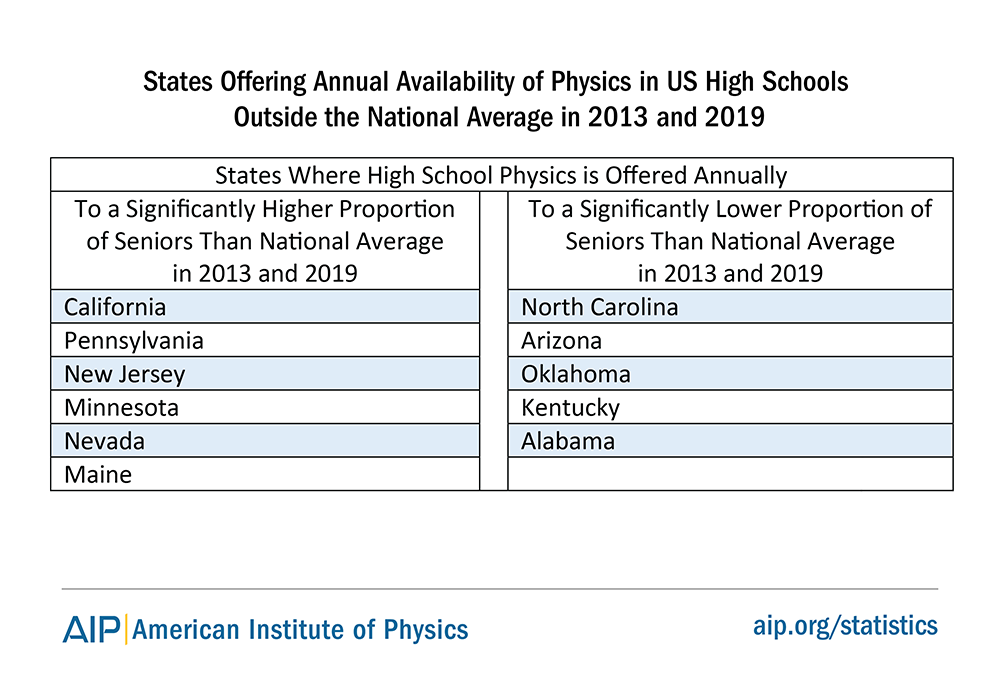 This study is based on a sample of one-sixth of the public and private high schools classified as regular, technical, or emphasis schools in the United States. Data collection for this round began in the fall of 2018.

We define a high school as a school with at least three students enrolled in grade 12. Many of these are traditional high schools; some comprise grades 7–12, and others, grades K–12.

We began with web searches for each of the 3,751 high schools in our sample. If we could identify a physics teacher at the school, we collected the contact information for that teacher. If not, we collected contact information for the principal or science chair. We then contacted each of the schools where we had not identified a physics teacher by phone and email to determine whether physics was offered at the school and, if so, who taught it. We collected data on whether physics was offered from 3,371 of our 3,751 (90%) sampled schools. We compared demographics for the non-responding schools with those of the responding schools and found no evidence to suggest that the two groups differ significantly. Therefore, evidence suggests that we have a representative sample of schools.

During the spring of 2019, we contacted each of the 3,538 teachers we had identified in the fall to learn more about physics in each of the high schools. We heard back from 42% of the teachers.

This survey series has exclusively focused on physics courses taught in high schools. In some cases, students at one school might attend a physics class at another school synchronously or asynchronously via video. When this was reported by the school, we counted these students as being enrolled in a physics class. This is consistent with our practice in previous studies.  Due to the COVID-19 pandemic, which started after we collected these data, the SRC will collect data on wholly online physics classes in future surveys.

We offer our sincere gratitude to the responding principals, teachers, and staff at our sampled schools for helping us provide this information.