The federal government’s 2016 report of Science and Engineering Indicators (SEI), released biennially by the National Science Board (NSB), finds that growth of knowledge- and technology-driven economies is accelerating worldwide, led by China. Science and engineering (S&E) has become international and multi-polar, concentrated not just in the U.S. but also in Asia and the E.U., and China is quickly rising to challenge the U.S. as the world’s dominant S&E nation.

Meanwhile, the report notes that U.S. government spending on research and development (R&D) has been on the decline since the Great Recession, which began in 2008. Thanks in part to growing private R&D expenditures, the U.S. is still first in R&D spending globally, but other nations are rapidly catching up. China in particular is on a path to eclipse the U.S. in total R&D spending within the next decade.

These are among the findings of the 2016 SEI report, released on Jan. 16 by NSB Chair Dan Arvizu, PreCourt Energy Scholar at Stanford University and emeritus director of the National Renewable Energy Laboratory, and Vice Chair Kelvin Droegemeier, vice president for research at the University of Oklahoma. Every two years since 1972, the NSB has issued the SEI report on the state of science and engineering. This is the first year the report is available online only.

All graphs and charts in this FYI are sourced from the NSB using data from the 2016 SEI report. 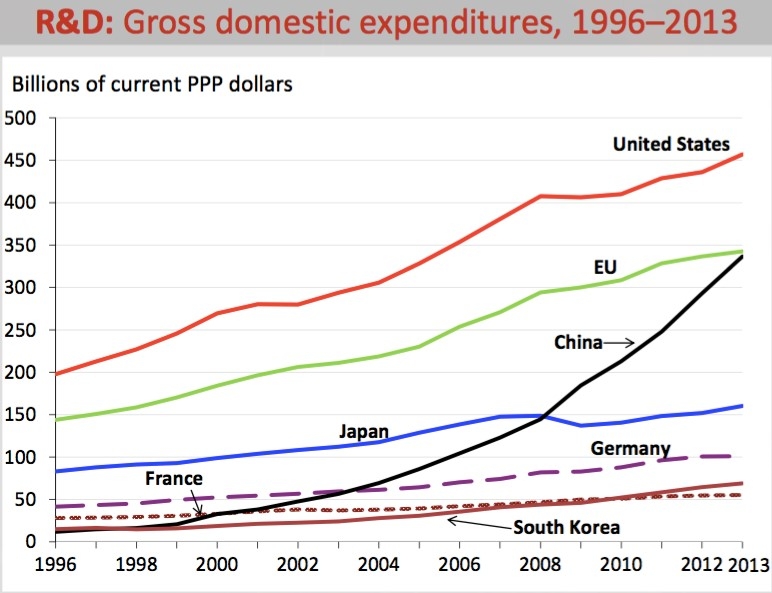 *PPP=Purchasing Power Parity, an adjustment in currency amount based on the ability to purchase a basket of goods in that country

Drawing on a range of authoritative data sources, the report finds global R&D concentrated in three regions globally: Asia, North America, and Europe. Together these regions comprise 90 percent of total global R&D. The U.S. remains the world leader, comprising about one fourth of the $1.7 trillion spent on R&D globally as of 2013. China comprises about 20 percent of the total and is now decisively second in the world with the steepest growth. Between 2003 and 2013, China ramped up its R&D investments at an average of 19.5 percent annually, greatly exceeding that of the U.S. 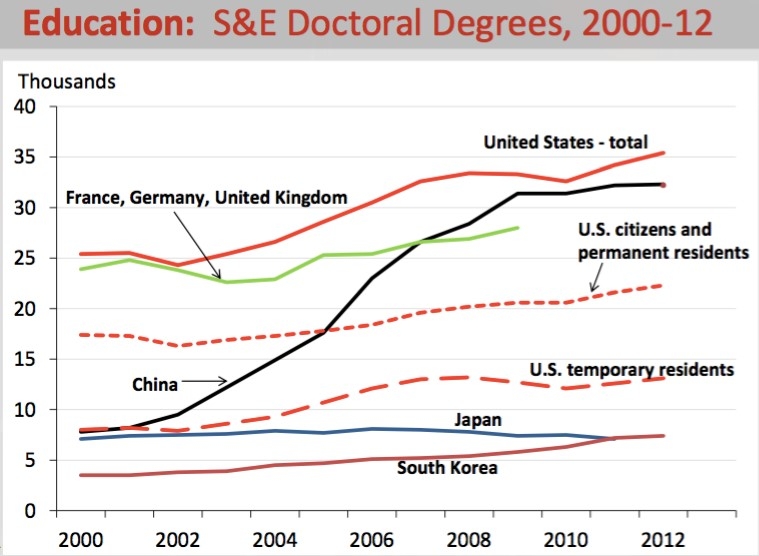 The report highlights how China and India (not shown in graph) now together produce almost half of new undergraduate S&E degrees, the E.U. 12 percent, and the U.S. 9 percent. University degree production in China is growing faster than in the U.S., rising more than 300 percent between 2000 and 2012. The U.S., however, still produces more S&E doctoral degrees than China and India and remains the leader in S&E higher education, as well as the destination of choice for international students. 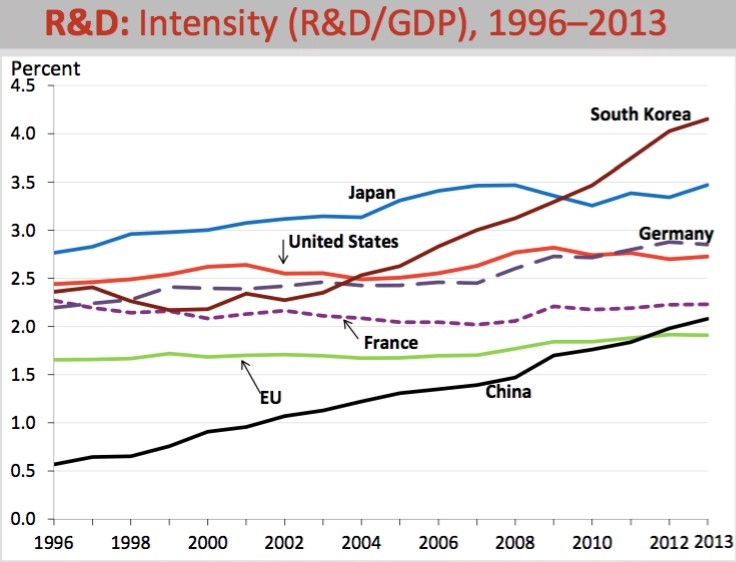 The rise of China, India, and South Korea is taking place against the backdrop of a lack of growth in U.S. research intensity – a measure of R&D expenditure as a percentage of the GDP. The U.S. has fallen from first to eleventh place in R&D intensity, which puts the nation behind many European countries, Japan, South Korea, and Israel.

A steady drop in public funding of R&D over the years has reduced the growth of U.S. R&D intensity. Since the Great Recession, federal expenditures on R&D have declined. The U.S. government now spends less than half as much on R&D relative to the size of the nation’s economy as it did in the mid-1960s when the Apollo Program was at its peak. This decline is mostly due to decreases in defense R&D. Rapid growth in private R&D expenditures since the 1960s has meanwhile sustained the U.S. as the world’s R&D leader through today. 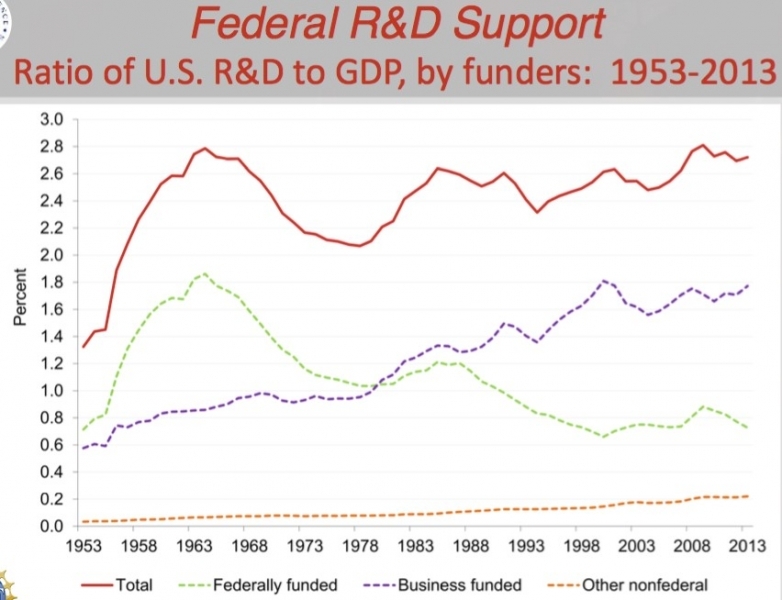 "Our universities conduct 51 percent of the nation's basic research and train the next generation of STEM-capable workers. Federal support is essential to developing the new knowledge and human capital that allows the U.S. to innovate and be at the forefront of S&T."

When a reporter asked the NSB leaders how concerned the U.S. should be about the rise of China, Droegemeier indicated that the expansion of R&D elsewhere in the world is beneficial: “R&D is not a zero sum game. It’s a good thing that other countries are emerging. There is plenty of room for lots of players.” However, he continued with a qualifyingpoint that sounded the alarm on our international competitiveness: “The investments the Asian countries are making in science, especially during the Great Recession, have really outstripped ours.”

Arvizu also noted how aggressive these other economies have been in their R&D investments: “They are profound. Their investments are moving beyond the speed of inflation. They are making inroads.” When asked when China would surpass the U.S. as the world’s S&E leader should present trends continue, Arvizu continued: “2022 is the date when the extrapolations of the two curves cross. We may actually be ahead of that now.”

Droegemeier indicated that constraints on the U.S. federal budget have held back R&D growth in recent years. Constraints include federal budget caps and sequestration put in place through the Budget Control Act of 2011, as well as the end of investments in R&D through the economic stimulus or American Recovery and Reinvestment Act. He added the U.S.’ falling ranking in S&E ought to serve as a rallying cry for national leaders who care about U.S. economic competitiveness:

“This is a clarion call to the U.S. that we can’t sit still if we’re going to be the world leader. … We have to continue investing by accelerating investments in basic research, our universities, STEM education, traditionally underrepresented groups, private companies, and products related to manufacturing and information services.”

"Other countries see how U.S. investments in R&D and higher education have paid off for our country and are working intensively to build their own scientific capabilities. They understand that scientific discovery and human capital fuel knowledge- and technology-intensive industries and a nation's economic health.” 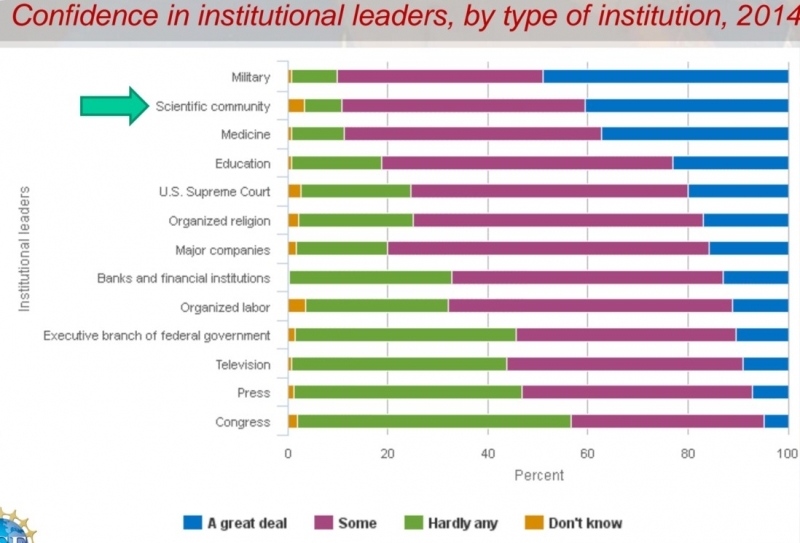 The report also looked at public attitudes toward scientists.  At a time of declining confidence in most U.S. institutions, Americans have mostly favorable views toward science, believing that science creates more opportunity for the next generation, that its benefits outweigh its risks, and that the federal government should fund scientific research.

Public trust in scientists as institutional leaders is among the highest of any set of leaders in the U.S. In 2014, 41 percent of the public expressed a great deal of confidence in the leaders of the scientific community, 49 percent expressed some confidence, while only 8 percent expressed hardly any confidence. Only military leaders commanded more trust from the U.S. public than scientists.

The outstanding question is how the scientific community, policymakers, and private sector will translate this widespread public confidence in science into the political will and financial support that will be necessary for the U.S. to maintain its position as the global leader in R&D.