The final appropriations agreement for fiscal year 2017 provides a 3.1 percent increase for NASA’s Science Mission Directorate. Planetary Science will receive a 12 percent increase and is instructed to proceed with a Europa lander mission. Heliophysics will receive a smaller increase while Earth Science funding will remain unchanged. As work on the James Webb Space Telescope ramps down, total funds allocated to Astrophysics activities will decrease.

With approval in the Senate yesterday, Congress has finalized appropriations legislation for fiscal year 2017 that provides for a 1.9 percent increase to NASA’s budget and, within that, a 3.1 percent increase to the Science Mission Directorate (SMD). The bill, the final product of some two years of legislative work, now goes to President Trump, who is expected to sign it today. At that point, the funding levels it mandates will prevail at least until the end of the fiscal year on Sept. 30.

Per custom, the bill is accompanied by an explanatory statement, which provides additional policy direction as well as recommended funding levels for the four divisions in NASA’s SMD and for a variety of programs and projects. The statement also establishes that last year’s House and Senate appropriations committee reports provide equivalent direction where not otherwise negated by new language. While the statement and reports do not carry the authority of law, agencies typically abide by their instructions.

Congress is providing for the following changes in funding for SMD: 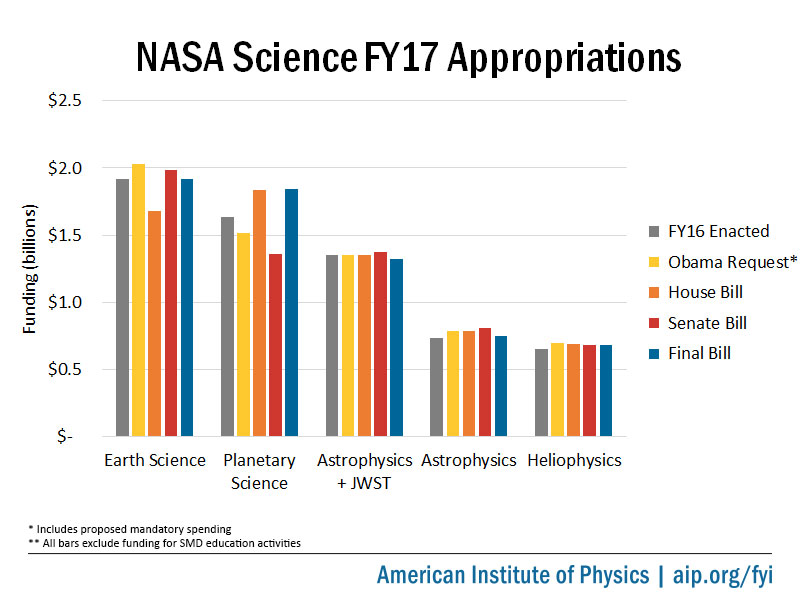 The bill raises SMD’s budget to the level of $5.764 billion, which is higher than the Obama administration’s request, the House and Senate proposals, and the funding authorization recently included in the NASA Transition Authorization Act. It also defies the Trump administration’s request for a 0.9 percent cut, proposed in March to help offset an immediate increase in military and border security spending.

While both the Obama administration and the Senate sought a major cut to the Planetary Science Division’s budget, negotiators ultimately acceded to the House’s proposed appropriation and provided a 12 percent increase. The new level nearly matches the $1.9 billion level that the Trump administration plans to seek for fiscal year 2018. However, Congress is upending the administration’s proposal to cancel a Europa lander mission by instead including a provision in the statute that NASA should launch the mission “no later than 2024.”

Within the Astrophysics Division, the James Webb Space Telescope (JWST) has now entered pre-launch testing and its budget is being reduced by about $50 million to reflect decreased activity. This reduction was not accompanied by any significant increase for other Astrophysics activities, even though one was called for in the Obama administration’s budget request as well as in the Senate’s and House’s original appropriations bills for NASA. Thus, all division activities, with JWST included, collectively took a 3.7 percent cut, which could disrupt plans for activities that are not explicitly provided with their requested funding.

The budget of the Earth Science Division has been the subject of intense scrutiny as the House had aimed to cut it by about 12 percent while the Obama administration and the Senate sought moderate increases. The final outcome of negotiations is that the budget is being left unchanged.

The Senate proposal of a 4.4 percent increase in the Heliophysics Division budget prevailed, bringing its total funding level to $678.5 million.

All figures are in millions of nominal U.S. dollars and are rounded to the nearest million. The percentages are calculated based on the unrounded figures.

† This table separates out FY17 funding for SMD education activities into a separate line to permit more accurate comparisons with FY16 and between the research division accounts. The figures for the House bill assume that the divisions contribute equal amounts to approximate the House’s proposal to spread funding “proportionally” across the four divisions. The final bill specifies that this funding be derived equally from Astrophysics and Planetary Science. The budget request and the Senate bill proposed that this funding be derived entirely from the Astrophysics budget. In FY16, these funds were included as their own line item in the SMD budget.

Further budget information, including figures for other NASA mission directorates, is available in the Federal Science Budget Tracker on FYI’s website. Below are selected highlights from the bill and its accompanying reports.