The Government Accountability Office has agreed to evaluate the state of scientific integrity at federal agencies at the request of Sen. Bill Nelson (D-FL), who says he is concerned about reports of political interference in scientific work. Some Republicans, meanwhile, are pressing reforms to agency procedures that they claim will bolster the quality of agency science. 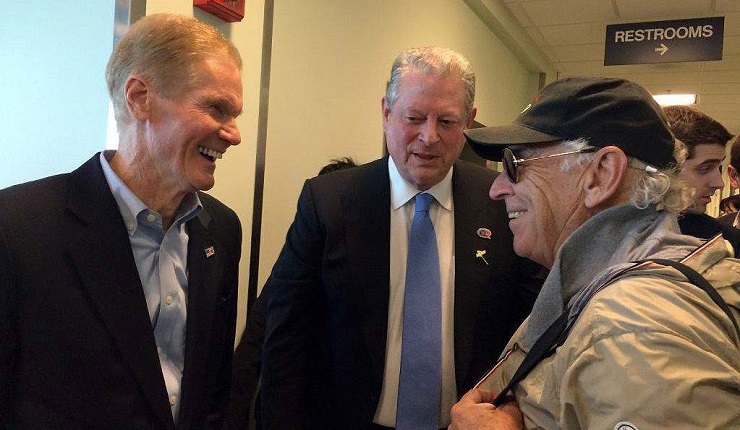 Sen. Bill Nelson (D-FL), left, accompanied by former Vice President Al Gore and musician Jimmy Buffett, on a trip to the Kennedy Space Center in 2015 to watch the launch of the Deep Space Climate Observatory.

The Government Accountability Office has agreed to conduct a study of the state of scientific integrity at federal agencies, according to a recent article in the Washington Post. Sen. Bill Nelson (D-FL), the ranking member of the Senate Commerce, Science, and Transportation Committee, requested the study in a letter to GAO dated Sept. 25, writing that he is “troubled by renewed reports of interference in the funding, conduct, and communication of science at some federal agencies.”

Nelson requested study of policies and violations of them

During the opening days of the Trump administration, reports of grant freezes and communications clampdowns at agencies raised fears that scientific integrity was about to come under direct assault. At that time, Nelson introduced the “Scientific Integrity Act,” which he said would help “protect our scientists from political interference” by codifying policies adopted during the Obama administration.

However, the feared assault has not materialized. Many of the administration’s early actions soon proved to be either misunderstandings or temporary measures. Meanwhile, Nelson’s bill has not progressed.

Nevertheless, as the year has worn on, a steady drumbeat of news reports has revealed a variety of apparent incidents of political control over scientists’ work, particularly in areas related to climate and the environment. It is difficult to say how widespread such actions are or to what extent they reflect administration or agency directives. The GAO study may lend some clarity to the matter.

In his letter, Nelson asked GAO to investigate both agencies’ implementation of safeguards to protect scientific integrity and whether agencies are in violation of the policies they have in place. He conveyed that he wants to know about the adequacy of both the policies and mechanisms for reporting violations, as well as how well federal scientists understand their rights and whether they feel their work is protected from interference. He also asked GAO to determine:

If the administration has violated scientific integrity policies by suppressing federally funded science, interfering with research grant activities, interfering in typical scientific processes, or restricting the freedom of federal scientists to communicate findings with the public.

In its reply to Nelson, GAO indicated it would begin the study in about four months, once personnel become available. It has not suggested how long it expects its work to take.

Some actions appear isolated, while top officials ordered others

Some reported examples of political interference appear to be isolated incidents. In August, for instance, Department of Energy officials asked grant awardees to remove uses of the phrase “climate change” from their abstracts. DOE insisted it is not agency policy to bar use of the term, but that would not exclude the possibility that some officials are acting out of fear of attracting attention from political appointees.

Other incidents appear to be intentional moves to keep certain scientific messages out of the public eye. In July, Department of Interior officials removed the director of the U.S. Geological Survey’s Climate Change in Mountain Ecosystems Project, Dan Fagre, from the list of people to accompany Facebook CEO Mark Zuckerberg on a tour of Glacier National Park. In August, DOI also cancelled a National Academies study of the health risks of surface coal mining to communities in West Virginia, claiming it was a budget-cutting measure.

Still other incidents have resulted in agency scientists making public accusations of improprieties. Biologist and former director of the DOI Office of Policy Analysis Joel Clement filed a whistleblower complaint in July, publicly alleging that he and about 50 others had been given unattractive reassignments as a form of political retaliation. In his case, he said it was because he had spoken out about the effects of climate change on Alaska Native communities. DOI claimed the reassignment was proper. Clement resigned on Oct. 4, offering a host of reasons, including that Interior Secretary Ryan Zinke and President Trump had “waged an all-out assault on the civil service by muzzling scientists and policy experts like myself.”

The Environmental Protection Agency has become a locus of particular concern. One prominent case involves EPA’s Board of Scientific Counselors (BOSC), which advises the EPA Office of Research and Development. In May, EPA began informing BOSC members that it would not follow the tradition of automatically renewing their terms, though they would be welcome to reapply. The move sparked worries that EPA intended to stack the board with members who will defer to industry viewpoints.  Two members resigned in protest.

BOSC Chair Deborah Swackhamer, a chemist and professor of environmental policy at the University of Minnesota, told the Minneapolis Star Tribune, “They politicized [BOSC], and, in my mind, are making it less objective.” Swackhamer also claimed that EPA had pressured her to change testimony she offered to the House Science Committee in May. “I felt bullied,” she told the New York Times.

Then, in September, it emerged that an EPA political appointee had begun reviewing grant solicitations and awards, reportedly sifting out ones relating to climate change. Just this week, talks by two EPA scientists on climate-related issues at a conference in Rhode Island were cancelled. The move sparked a protest and drew condemnation from the state’s entire congressional delegation. In addition, EPA removed all references to climate change from a website previously dedicated to “Climate and Energy Resources for State, Local, and Tribal Governments.”

Numerous other instances have been reported of agencies removing climate information from their websites. However, to what degree that might constitute a scientific integrity violation is not obvious since agencies do have broad discretion about what messages they present to the public. There are no reports of scientific data or research publications being systematically withdrawn from public access, though there have been some reports that some data and documents have been made harder to find.

A number of Republicans in Congress and the Trump administration have asserted that, far from interfering in the scientific process, they are restoring its integrity. They argue that a profusion of activist researchers in environmental and climate science, supported by federal policies and funding, has created systematic bias in those fields. They point to the current debate over research reproducibility and resulting calls for additional research transparency as evidence that traditional peer review has been an insufficient means of ensuring scientific quality.

Accordingly, some Republicans have begun advocating a “red team/blue team” exercise to pit supporters of the scientific consensus in climate change against their opponents. Notably, Energy Secretary Rick Perry has endorsed the idea and EPA Administrator Scott Pruitt is considering staging such an event. Opponents assert the exercise dismisses the results of a superior process of continual scientific criticism that has led to the current consensus.

This year, leaders of the House Science Committee have also advanced legislation — the “Honest and Open New EPA Science Treatment Act,” and the “EPA Science Advisory Board Reform Act” — to reform the way EPA uses science in its regulatory process. The House passed those bills in March but they have not yet advanced in the Senate.

Last week Pruitt declared at a Heritage Foundation event that he will implement his own reforms to EPA’s science advisory panels, restricting EPA grantees’ service on them. He explained,

If we have individuals that are on those boards who are receiving money from the agency, sometimes going back years and years, to the tune of literally tens of millions of dollars over time, that to me causes question on the independence and the veracity and the transparency of those recommendations that are coming our way.

Pruitt said that he would issue a directive, which he did not further detail, this week.