The Department of Energy Office of Science was among the most favored science agencies in the final spending legislation for fiscal year 2018, receiving its largest single-year budget increase since 2009.

The Department of Energy Office of Science was among the top beneficiaries of the windfall for science agencies provided by the final appropriations legislation for fiscal year 2018. The bill raises its budget to $6.3 billion — a $869 million, 16 percent increase — the largest single-year influx it has received since 2009, when Congress provided $1.6 billion in stimulus funds through the American Recovery and Reinvestment Act.

It had been clear since last summer that Congress would reject the Trump administration’s request for a 17 percent cut to the office, as the House and Senate both advanced spending bills maintaining its funding near the current level of $5.4 billion. However, it was uncertain how much the office would stand to benefit from the deal struck in February that raised nondefense spending caps for fiscal year 2018 by 12 percent.

As shown in the chart below, all six of the Office of Science’s main research programs received double-digit percentage increases, with Fusion Energy Sciences and Advanced Scientific Computing Research faring particularly well. 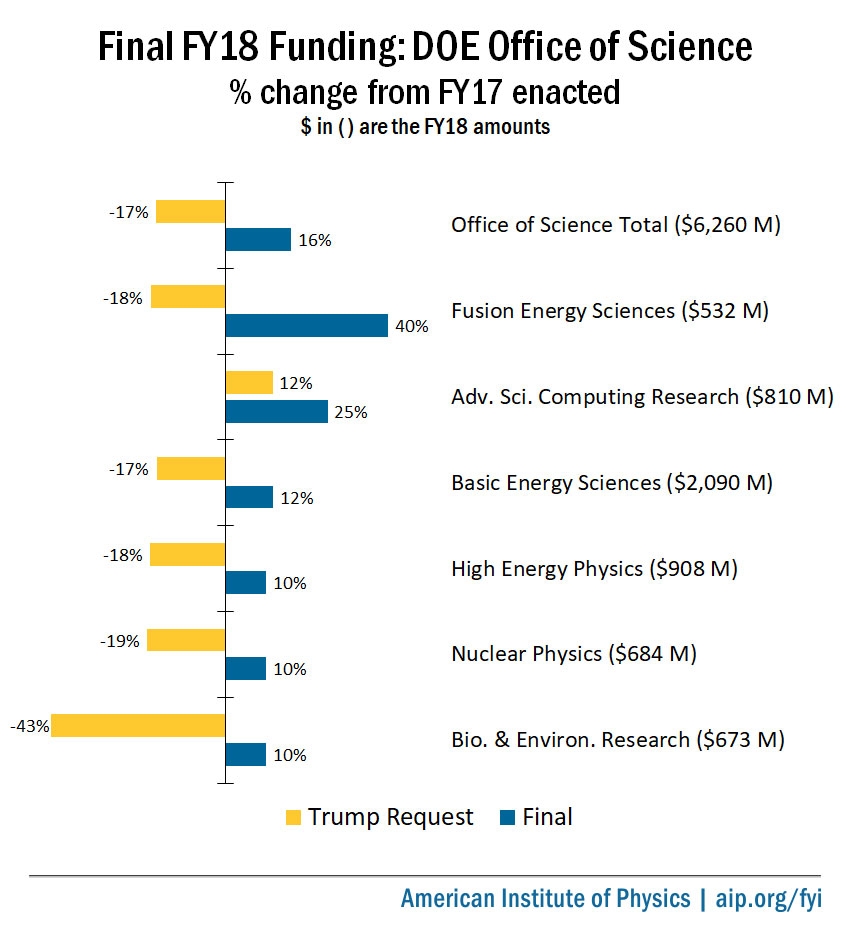 The joint explanatory statement containing funding and policy direction for DOE is available here. Unless otherwise noted within the statement, language from the House and Senate Appropriations Committee reports is also valid. Detailed tables with funding amounts for programs are available in FYI’s Federal Science Budget Tracker.

Funding unleashed for light and neutron source upgrades. The statement specifies $192 million for the penultimate year of construction for the Linac Coherent Light Source-II (LCLS-II) at SLAC National Accelerator Facility, $10 million above the project plan presented in the budget request. It also provides $93 million for the upgrade to the Advanced Photon Source at Argonne National Laboratory, over double the amount appropriated last year and $73 million over the request.

Full steam ahead for current programs. The statement instructs DOE to provide “not less than” the current amounts for Synchrotron Radiation Sources, Energy Frontier Research Centers, and Energy Innovation Hubs. It also directs DOE to proceed with renewing a five-year charter for the Joint Center for Energy Storage Research. 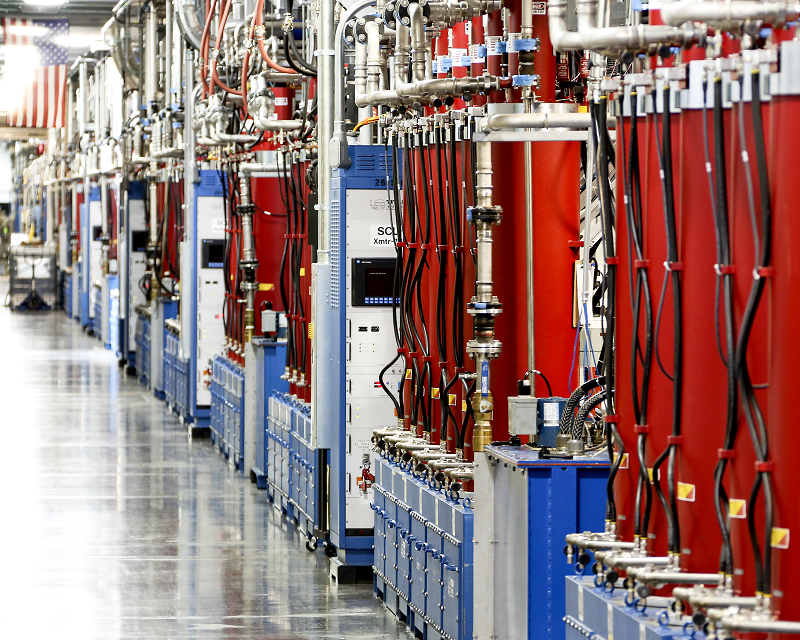 As part of the Proton Power Upgrade, new equipment will be installed in this linac klystron gallery, which drives the Spallation Neutron Source’s beam.

FES received the highest percentage increase among the program offices, rising 40 percent to $532 million. Much goes toward increasing contributions to the ITER fusion facility being built in France, but funding for other FES activities also fares well, rising 24 percent to $410 million.

ITER funding brings relief but cash still withheld. The bill provides $122 million for “in-kind contributions and related support activities” to the ITER project, over double what Congress provided last year. This is equal to the amount of U.S. hardware contributions DOE has estimated is necessary for ITER to achieve first plasma by 2028, a key milestone. However, the bill does not address the U.S.’s backlog of cash obligations, which Congress has withheld.

ITER Director General Bernard Bigot has said that the hardware funding increase will “prevent ITER having to announce project delays in 2018,” but noted that cash contributions will ultimately be required to keep the project on track. He also said he “hope[s] that at least maybe a small part of the U.S. 2018 contribution could be in cash so as to give a political signal to the other ITER members.”

The Trump administration is currently assessing whether to remain in ITER as part of a broader nuclear energy policy review.

The HEP budget will increase 10 percent to $908 million, an amount well above the planning scenarios used by the most recent Particle Physics Project Prioritization Panel.

Flagship neutrino facility construction ramping up. Funding for construction of the Long-Baseline Neutrino Facility (LBNF), a flagship particle physics project led by Fermilab, will nearly double to $95 million, which is $40 million more than requested. The statement also specifies $24.1 million for the Proton Improvement Plan-II, which will provide a beam power upgrade needed for LBNF.

Senate strongly supports Large Hadron Collider upgrades. The statement does not specify amounts for upgrades to the Large Hadron Collider in Europe. However, the Senate report says the committee continues to “strongly support” U.S. participation in the facility and directs DOE to “prioritize and provide optimal funding for the LHC accelerator upgrades and the LHC CMS and ATLAS collaboration activities.”

Other experiments also fare well. The statement also specifies significantly more funding than requested for two experiments that are searching for dark energy and matter: $17.5 million for the Dark Energy Spectroscopic Instrument and $7.4 million for SuperCDMS-SnoLab. The requested level of funding is provided for LUX ZEPLIN, the Muon to Electron Conversion Experiment, and the Large Synoptic Survey Telescope Camera.

The NP budget will increase 10 percent to $684 million.

Isotope beam facility construction continues. The statement specifies $97 million for construction of the Facility for Rare Isotope Beams (FRIB) at Michigan State University, $17 million over the request. It also includes $5 million more than the $0.2 million requested to begin building the Gamma-Ray Energy Tracking Array, which DOE states is needed to “fully exploit the physics opportunities of FRIB.”

Optimizing current facility operations a priority. The statement does not specify funding levels for facilities currently in operation, but directs DOE to “give priority to optimizing the operations for the Relativistic Heavy Ion Collider, the Continuous Electron Beam Accelerator Facility, the Argonne Tandem Linac Accelerator System, and the Brookhaven Linac Isotope Producer Facility.”

ASCR received the second highest percentage increase among the program offices, rising 25 percent to $810 million. Much of the influx will go toward development of exascale computers, the first of which DOE hopes to complete in 2021.

Senate chair supports exascale project. Funding for the Exascale Computing Project account will rise 25 percent to $205 million. The bill does not include language from the House report expressing concerns about the project and directing DOE to submit a cost baseline to Congress accounting for a flat funding scenario. The Senate was more supportive of the project in its report, and Sen. Lamar Alexander (R-TN), who chairs the appropriations subcommittee for DOE, highlighted the exascale project increases in a statement on the final bill.

Leadership computing facilities and ESnet fare well. Funding for the facilities that will host the exascale computers will also rise considerably:

Although BER was targeted for cuts in both the administration’s request and the House bill, it emerged with a percentage increase equal to that of HEP and NP, rising 10 percent to $673 million.

Funding will be at least level for many programs. The statement specifies that DOE provide “not less than” current funding levels for several programs, including BER’s three major user facilities. It also specifies $25 million for each of the three existing Bioenergy Research Centers and $15 million for the new awardee, a 20 percent overall funding increase.

Budget for facility construction and revitalization surges. Funding will almost double for the Science Laboratories Infrastructure program, which supports general purpose facility improvements across the national lab complex. Within a total of $257 million,