Funding for the National Institutes of Health is increasing by 5 percent or $2 billion in fiscal year 2019. The spending legislation also maintains a prohibition on changing research overhead reimbursement policies and includes additional resources for monitoring the integrity of the grantmaking process.

The National Institutes of Health is receiving a $2 billion or 5 percent spending increase in fiscal year 2019, bringing the agency’s budget to $39 billion. The boost is part of a two-bill spending package Congress approved this week that provides final appropriations for the Departments of Defense, Education, and Health and Human Services (HHS), the parent agency of NIH.

The appropriation marks the fourth year in a row that Congress has provided NIH with a multibillion dollar increase. Since 2015, the NIH budget has increased 30 percent. Within the agency’s topline increase, the legislation includes funding boosts for all 27 of NIH’s institutes and centers. The following chart shows the budget outcomes for five institutes especially relevant to the physical sciences. 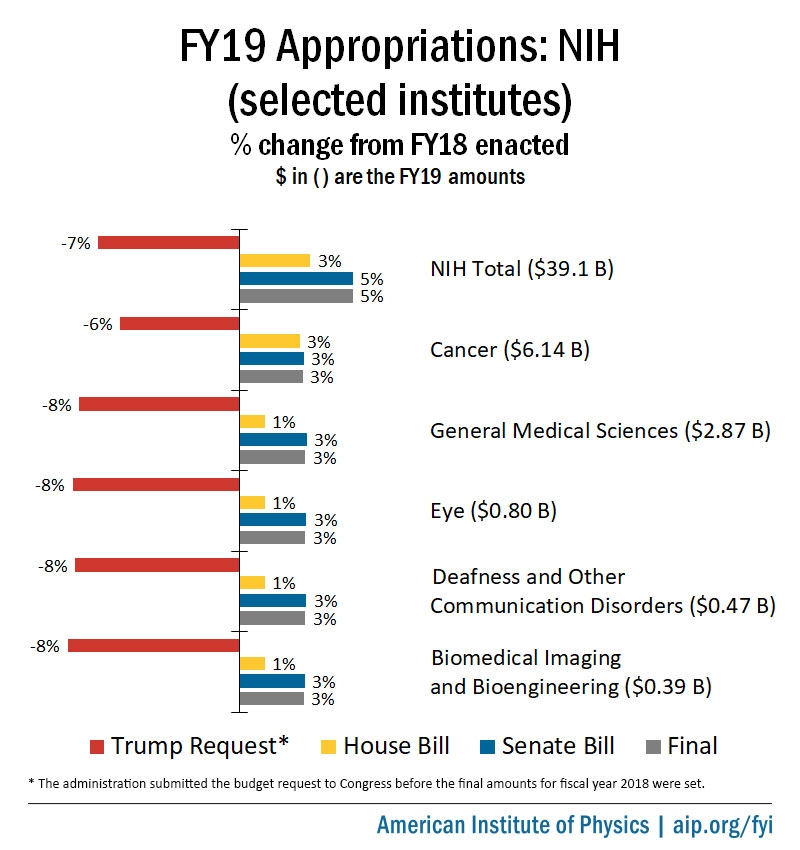 An explanatory statement accompanying the legislation specifies funding levels for individual programs and provides additional policy direction. Language from the House and Senate Appropriations Committee reports on their original spending proposals is also valid unless negated by the final statement. Comparisons between those proposals, the president’s budget request, and final amounts can be found in FYI’s Federal Science Budget Tracker.

The legislation once again prevents NIH from changing policies related to indirect cost rates, which govern the agency’s reimbursement of research institutions for facilities and administrative expenses.

The Trump administration had proposed capping these rates at 10 percent of total grant cost in its fiscal year 2018 budget request. The rates have hovered near 28 percent over the past two decades. The administration maintained lowering the cap would offset the $9 billion cut it proposed for NIH that year.

Congress thoroughly rejected the idea, including a provision in the final fiscal year 2018 appropriations law that directs NIH to apply indirect cost rate policies “to the same extent and in the same manner” as in the third quarter of fiscal year 2017.

It also specifies that no departments or agencies can use any funds to “develop or implement a modified approach to such provisions, or to intentionally or substantially expand the fiscal effect of the approval of such deviations from negotiated rates.”

The same language is included in this year’s legislation. In a Statement of Administration Policy sent to Congress in August, the White House said it is “disappointed” in the provision and that the administration “strongly opposes any attempts to prohibit NIH or any other agency staff from developing strategies to make government programs more effective and efficient.”

The statement directs NIH to transfer $5 million to the HHS Office of the Inspector General to “examine NIH’s oversight of its grantees’ compliance with NIH policies, including NIH efforts to ensure the integrity of its grant application and selection process.” It also directs the office to examine the “effectiveness of NIH’s and grantee institutions’ efforts to protect intellectual property derived from NIH-supported research.” The statement makes clear these funds are provided on top of the amount the office currently dedicates to overseeing NIH.

The provision reflects growing concerns in Congress over intellectual property theft by foreign nations. At a Senate hearing in August, NIH Director Francis Collins described steps NIH is taking to protect the integrity of the grantmaking process from foreign influence. Collins noted he had sent a letter to over 10,000 NIH grantee institutions outlining concerns about “diversion” of intellectual property, attempts to influence funding decisions, and the failure of some researchers to disclose resource contributions from other organizations, including foreign governments.

Collins also said he has created a working group that will identify steps to improve reporting of financial contributions, enhance intellectual property security, and protect the integrity of peer review in a way that “emphasizes the compelling value of ongoing honorable participation by foreign nationals in the American scientific enterprise.”

Research Policy Board. In its Statement of Administration Policy, the White House expresses disappointment that the legislation does not provide funding to establish and operate the Research Policy Board, created by the 21st Century Cures Act. The board is intended to recommend ways to harmonize research regulations across the government and reduce administrative burdens.

Research transparency. As part of efforts to ensure NIH funds “are used to support the most meritorious research,” the Senate committee report directs NIH to explain, on a publicly accessible website, how “each grant or agreement promotes efforts to seek fundamental knowledge about the nature and behavior of living systems and/or the application of that knowledge to enhance health, lengthen life, and reduce illness and disability.” The report notes that committee members have “raised concerns and provided examples of questionable research.”

Data science. Senate report language stands providing $30 million to support NIH’s efforts to advance data science. NIH recently published its strategic plan for data science and will be hiring a chief data strategist to coordinate the implementation of the plan across the institutes and centers.