The Trump administration has proposed to decrease the National Oceanic and Atmospheric Administration’s budget by 20 percent in fiscal year 2019, echoing many of the cuts to research and other programs requested for fiscal year 2018. The new proposal would cut hundreds of weather forecasting positions while keeping the development of NOAA’s satellite observations programs on track.

The Trump administration’s fiscal year 2019 budget request for the National Oceanic and Atmospheric Administration proposes a 20 percent or $1.1 billion cut below the fiscal year 2017 enacted level. Cuts to programs include a 6 percent decrease for the National Weather Service (NWS) and a 26 percent decrease for the National Environmental Satellite, Data, and Information Service (NESDIS), although the NESDIS decrease reflects the ramp down of key satellite programs. The Office of Oceanic and Atmospheric Research (OAR) would see an especially large cut of 37 percent. 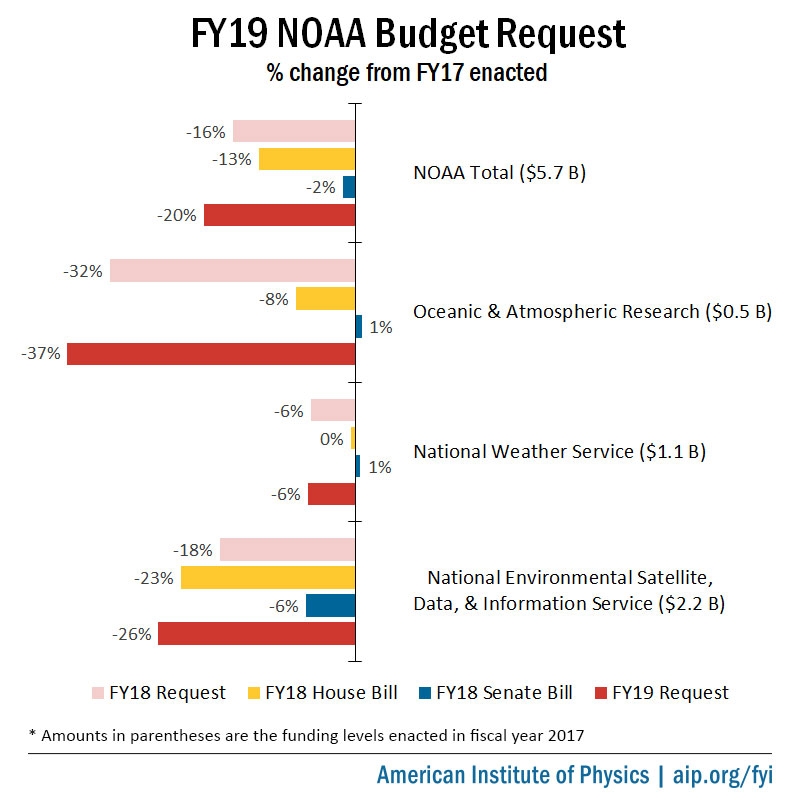 The proposed reductions and program eliminations across the agency echo those requested in fiscal year 2018. The administration has also increased the severity of proposed cuts to climate research, seeking to eliminate the competitively funded climate research programs within OAR, and proposes to eliminate almost 250 weather forecasting staff positions to “increase flexibility within NWS’ model.”

It is unlikely that Congress will accept cuts at this scale. The House and Senate diverge widely in their fiscal year 2018 NOAA spending proposals, but neither would cut its research programs at the double-digit level the administration is proposing. Furthermore, appropriators developed those spending bills before Congress reached a budget agreement that raises nondefense spending caps by a total of $131 billion in fiscal years 2018 and 2019, some of which will be appropriated to science agencies and programs.

The administration seeks to decrease funding for OAR by 37 percent to $322 million, slightly deeper than the 32 percent cut requested last year.

Climate Research. Doubling down on last year’s proposal to slash the Climate Competitive Research program by one-third, this year’s request would terminate the $48 million program that provides competitive extramural grants in several high-priority climate research areas. This elimination, the request notes, would reduce support for universities and NOAA’s cooperative institutes.

However, some program funds would be redirected to other initiatives as part of a larger effort to streamline climate research within OAR. $5.7 million would be transferred to the U.S. Weather Research Program to support seasonal to subseasonal (S2S) atmospheric research, while $14 million would go to the Climate Laboratories and Cooperative Institutes Program to support long-term observations and climate records.

The request again proposes to eliminate $6 million in Arctic research, which supports sea ice modeling and prediction as well as ecosystem and fisheries vulnerability assessments.

Weather and Air Chemistry Research. The administration proposes a $22 million, or 19 percent, cut to Weather and Air Chemistry Research. It once again seeks to close the $4 million Air Resources Laboratory, as well as eliminate the $5 million Unmanned Aircraft Systems Program Office and the $10 million Joint Technology Transfer Initiative, which aims to facilitate weather research-to-operations from OAR to NWS. Support for Airborne Phased Array Radar R&D and the Vortex-Southeast tornado field program would also be terminated.

Ocean, Coastal, and Great Lakes Research. The administration once again proposes to terminate the $72 million National Sea Grant College Program, which supports coastal and marine-related research, extension, and education activities across the nation. The Sustained Ocean Observations and Monitoring program budget would see a $4.6 million cut, reducing its capacity to help maintain a number of global ocean observing programs.

The administration again seeks a 6 percent decrease to the NWS budget, which would reduce its funding from $1.12 billion to $1.05 billion in fiscal year 2019.

NWS workforce reductions. The administration proposes to implement recommendations from the 2017 NWS Operations and Workforce Analysis (OWA) report, and eliminate approximately 250 forecasting positions. The request justifies the cuts by observing:

The OWA recognizes inherent inefficiencies associated with the rigid field office structure of NWS and provides various recommendations to make the agency more effective and efficient to protect lives and property. Of these recommendations, OWA suggested increasing flexibility within NWS’ operating model. This workforce savings is the initial step of implementing OWA recommendations. NWS will immediately begin implementing a series of operational reforms aimed at increasing staff flexibility to best match service demands with available resources.

As part of the proposed change, NWS would implement several major operational changes, including:

Surface observations. Funding for the National Mesonet Program would decrease by $11 million, forcing it to narrow the geographic scope of observations to areas prone to tornadic activity and other severe weather events and “limit observations to surface meteorological observations and lightning.”

Marine observations. Echoing last year’s request, funding would decrease for both the Marine Observations and Tsunami Research and Operational Warning programs. The administration also seeks to cut funding for seven and 15 buoys, respectively, on the Weather and Ocean Platform and TAO array while maintaining 80 percent availability for the remaining networks. Efforts would continue to merge tsunami research and warning operations in Hawaii and Alaska into one center.

Weather research-to-operations. Support within the NWS’ $137 million Science and Technology Integration office for transitioning numerical weather prediction modeling to operations would decrease by $5 million, which would slow development of the Next Generation Global Prediction System, eliminate support for the Unified Global Coupled System and reduce support for the Hurricane Forecast Improvement Project, NOAA Environmental Modeling System, and multiple NOAA testbeds.

The administration is proposing a $564 million, or 26 percent, reduction to the $2.2 billion NESDIS budget. The cut would be 9 percent smaller than the one in its last request. Once again, most of the decrease reflects the planned ramp down of key satellite programs.

Polar satellites. Polar-orbiting satellites are the only NOAA program highlighted within the President’s high-level budget request document. The narrative recognizes them as a critical component of NOAA’s mission to protect lives and property by “providing space-based observations that improve the accuracy of weather prediction.”

As a step toward organizing NESDIS into thematic portfolios, the administration proposes to merge accounts for NOAA’s polar-orbiting satellites — the Joint Polar Satellite System (JPSS) and Polar Follow On program — into a new “Polar Weather Satellites” program.

The administration is proposing $878 million for the new program, a combined $238 million, or 21 percent, reduction below current levels. With the JPSS-1 satellite having launched successfully last November, decreases in baseline funding for the program over the next several years are expected. Even with the proposed cuts, the funds requested will enable NOAA to maintain the original launch dates for the next three JPSS satellites.

Geostationary satellites. The Geostationary Operational Environmental Satellite – R Series (GOES-R) would see a planned $345 million decrease. Remaining funding would prioritize the development of future GOES-R series satellites, with the next satellite in the series GOES-S scheduled to launch in March 2018.

COSMIC-2 satellites. Citing delays in the launch of COSMIC-2’s first constellation of satellites, which are now set to fly in summer 2018, the request includes a one-time $2.1 million decrease for the program. The program, which aims to improve weather forecasts using GPS radio occultation technology, is a partnership with the U.S. Air Force and Taiwan. NOAA cancelled the planned second constellation of COSMIC-2 satellites last October, citing a lack of funding and partner support.

MetOp-C satellite: The request again proposes a rapid ramp up of funding for the MetOp-C satellite, which is planned for launch in October 2018 and will provide additional mid-morning polar observations for weather forecasting.

Commercial weather data. The request proposes a $1 million increase for the Office of Space Commerce to improve its ability to serve as the government’s “entry point” for commercial data providers, but proposes a $2 million decrease to the Commercial Weather Data pilot program, which assesses the potential use of commercial data in NOAA weather modeling and forecasting products.