This week, the House Energy and Commerce Committee is kicking off a series of hearings related to its ongoing efforts to reform the Department of Energy. The first hearing will focus on DOE’s primary mission areas and​ “opportunities to unleash the full potential of DOE’s scientific, engineering and technological capabilities.” The committee’s efforts will add to a growing set of changes, proposals, and discussions concerning how DOE structures, manages, and prioritizes its laboratory and other R&D activities.

Last week, the House Energy and Commerce Committee announced it is holding a series of hearings dedicated to the “modernization” of the Department of Energy.

The hearings will contribute to an effort, proceeding out of public view since last summer, to develop broad new authorizing legislation for DOE. In a statement, Rep. Fred Upton (R-MI), who chairs the committee’s Energy Subcommittee, said changes in the nation’s energy landscape over the last several decades have made it time to “flip the script on the department and ensure its mission can meet 21st century challenges — from its continuing nuclear security responsibilities to the geopolitical benefits of energy abundance to the emerging threats of the cyber age.”

The first hearing in the series, scheduled for Jan. 9 before Upton’s subcommittee, will address DOE’s core national, economic, and energy security missions. One of its focuses will be identifying “opportunities to unleash the full potential of DOE’s scientific, engineering, and technological capabilities to meet the nation’s security and national energy policy needs.” It will also tackle the related issue of the management of DOE’s national laboratories and their role in fulfilling mission needs. Ten witnesses are scheduled to appear, including Deputy Energy Secretary Dan Brouillette, all three DOE under secretaries, and the director of Oak Ridge National Laboratory.

While the nature and scope of the committee’s DOE reform efforts remain to be seen, committee members are likely to engage in the ongoing debate over how DOE should structure and prioritize its R&D activities. Ultimately, any legislation the committee produces will have to be integrated or reconciled with the department’s own ongoing reforms as well as with a variety of proposals currently circulating in Congress relating to DOE’s support for technology innovation.

Since 2013, management of DOE’s Office of Science and its applied energy offices had been unified under the under secretary for science, redesignated the “under secretary for science and energy.” Now, Menezes will take over responsibility for the applied energy offices while Dabbar will retain responsibility over the Office of Science and take on oversight of DOE’s environmental cleanup activities. Of note, Dabbar is a former member of DOE’s Environmental Management Advisory Board.

At a DOE town hall meeting, Brouillette cited the rise of cyber threats as an example of changing world conditions that make it necessary for the department to “change and refine” its focus. He explained that now the under secretary positions will more closely align with the statute that created them. He also said that the revision of Dabbar’s portfolio would help DOE apply the Office of Science’s project management and contract oversight capacities, as well as its scientific expertise, to environmental management efforts.

However, in splitting the management of the Office of Science and the applied energy offices, the reorganization undercuts a key rationale for the 2013 reorganization: increasing the department’s “ability to closely integrate and move quickly among basic science, applied research, technology development and deployment.” It also splits oversight of the national laboratories among three under secretaries rather than two.

How DOE plans to relate its basic research to applied R&D going forward will be a subject open to discussion at this week’s hearing. 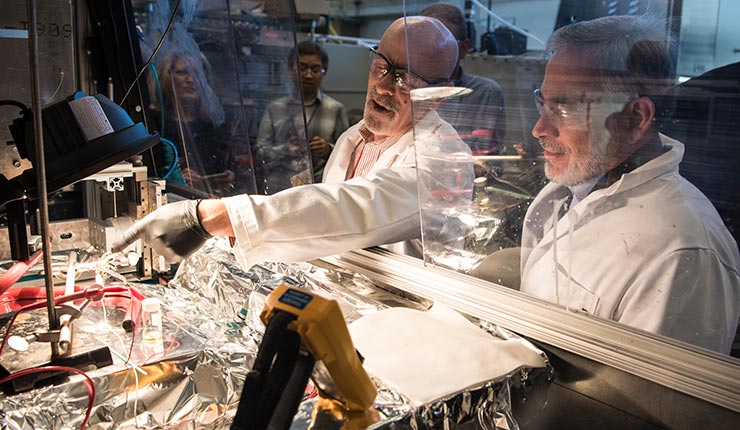 NREL offers general permission to use for journalistic purposes

Apart from the December reorganization, the Trump administration has also established a clear policy of de-emphasizing “later-stage” R&D and technology commercialization activities, arguing they should be supported by industry instead. In the administration’s view, federal intervention in such activities would interfere in the operation of the market in selecting preferred energy technologies.

A Dec. 13 hearing held by the Energy Subcommittee of the House Science Committee explored how this policy is unfolding in the context of the solar energy R&D program managed by the DOE Office of Energy Efficiency and Renewable Energy (EERE).

One of the witnesses was Daniel Simmons, who is currently EERE’s most senior official. A Trump appointee, Simmons previously served as vice president for policy at the Institute for Energy Research, a free market-oriented think tank. He testified that reductions in the cost of solar power justify a reorientation of R&D toward the “longer-term challenge” of grid reliability and integration. He explained this entails focusing R&D on concentrated solar power technology and “early-stage projects” relating to the interface between solar panels and the electric grid.

Martin Keller, director of the National Renewable Energy Laboratory, made the case for more “early-stage research” in areas such as perovskite materials, which he said could make possible the high-speed, low-cost manufacture of photovoltaic cells. He urged, “What is now needed is a federally supported hub for perovskite research coordinating the work of industry, universities, and national labs to deliver breakthroughs needed to swiftly bring this technology to market.”

Steve Eglash, Stanford University’s executive director for strategic research initiatives in computer science, testified in favor of DOE–industry partnerships, citing as a success story the DOE-backed Bay Area Photovoltaic Consortium that he helped develop. However, another witness, Kenny Stein, the current policy director at the Institute for Energy Research, said that government support for such consortia is unwarranted.

How DOE prioritizes its R&D programs could lead to substantial reconfigurations of its research portfolio, depending on how much support Congress allocates to the department’s various offices when it finalizes appropriations for fiscal year 2018. In the case of the solar energy program, support has already faced a rapid decline from $240 million in fiscal year 2016 to $208 million, and the Trump administration has proposed a further cut to $70 million. The House and Senate, meanwhile, have proposed budgets of $90 million and $168 million, respectively.

While the Trump administration is advocating a light touch toward the development and commercialization of energy technologies, congressional Democrats and many Republicans support an innovation policy that spans from basic research to commercialization.

Sen. Lisa Murkowski (R-AK) has said she hopes to move forward this month with her broad, bipartisan “Energy and Natural Resources Act,” which Congress nearly passed last year. The bill contains a number of provisions authorizing DOE technology transfer and commercialization initiatives as well as the department’s “crosscutting” R&D projects that span the Office of Science and the applied R&D programs. As written, the bill would also enshrine in statute the title of “under secretary for science and energy” introduced in the 2013 DOE reorganization.

On Dec. 20, Sens. Chris Coons (D-DE) and Lindsey Graham (R-SC) introduced the “IMPACT for Energy Act” and Reps. Ben Ray Luján (D-NM) and Joe Wilson (R-SC) introduced a companion bill  in the House. The legislation would direct DOE to establish an independent nonprofit foundation that would accept financial contributions from private industry and channel them into energy technology initiatives, including R&D partnerships, prize competitions, fellowships, and grants.

There is also currently a bill with bipartisan backing in the Senate that authorizes an existing program that awards DOE funds to its labs in order to spur lab–industry partnerships aimed at commercializing new technologies. Another bill in the House, which has seven Republican cosponsors, would reauthorize the Advanced Research Projects Agency–Energy, which partners with industry and universities to advance energy technologies to the point where they can attract private investors.

The Trump administration is proposing to eliminate ARPA–E, but that proposal is facing significant resistance. In particular, ARPA–E has influential backers in the Senate, including Murkowski and Sen. Lamar Alexander (R-TN), who chairs the appropriations subcommittee responsible for DOE’s budget.