Research community leaders warned the House Science Committee last week that the U.S. could face an acute shortage or oversupply of STEM workers if it does not carefully manage investments in R&D, remain welcoming to international talent, and better develop its domestic workforce. 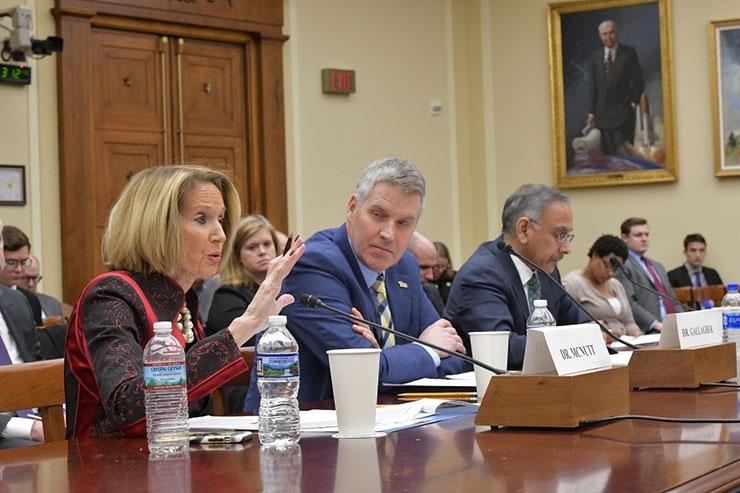 The House Science Committee held a hearing last week to discuss ways the U.S. can maintain leadership in science and technology in the face of growing global competition. Testifying before the committee were Marcia McNutt, president of the National Academy of Sciences; Patrick Gallagher, chancellor of the University of Pittsburgh and former director of the National Institute of Standards and Technology; and Mehmood Khan, chief scientific officer at PepsiCo and chair of the Council on Competitiveness.

They stressed the U.S. must better develop domestic talent and continue to welcome students and researchers from abroad to ensure the future sufficiency of its STEM workforce. The hearing surveyed strategies for better matching training with industry needs and encouraging more women to pursue STEM careers.

China also loomed large, with committee leaders noting it has been on pace to soon surpass the U.S. in total R&D spending. Three Republican members also asked witnesses how the government should respond to Chinese espionage, a topic that has come to the fore in Congress over the past year.

Committee Chair Eddie Bernice Johnson (D-TX) opened the hearing by citing various benchmarks of U.S. competitiveness in science and technology. She lamented the stagnant performance of U.S. students in math and science assessments as well as the persistent underrepresentation of women and minorities in STEM fields, saying it could lead to “dire workforce shortfalls” if not addressed soon. She also noted the U.S. is behind several other countries in terms of the share of GDP spent on R&D and said China “likely” surpassed the U.S. in total R&D spending last year.

Committee Ranking Member Frank Lucas (R-OK) likewise expressed concern about China potentially surpassing the U.S. He signaled support for increasing R&D spending despite current budget pressures and said the federal government “has a responsibility to prioritize basic R&D.” He noted that Congress appropriated $152 billion for R&D last year, which he said is a historic high in inflation-adjusted dollars.

To sustain support for such spending, Lucas continued, Congress needs to do a better job of explaining the value of science to the public. “We need to break down the barrier between the ivory tower of academia, the hallways of Silicon Valley, and the Main Street of Cheyenne, Oklahoma,” he said.

Witnesses also weighed in on the level and composition of U.S. investment in R&D. McNutt said the U.S. is “doing okay” on total R&D spending, but noted China has rapidly caught up and that the return of tight budget caps could cause significant damage.

“There is nothing more disruptive to the U.S. science enterprise than huge swings in science budgets,” she remarked. Citing the recent government shutdown as a prime example of such a shock, she noted the National Academies is considering doing a rigorous assessment of its impacts.

Asked by Rep. Brian Babin (R-TX) what the government should cut to support more R&D spending, McNutt said a large increase is not necessarily needed, again stressing that budget predictability is paramount. She also said that large increases in funding can actually be harmful if they create a workforce that cannot be supported when budgets later stagnate.

Gallagher also highlighted how a lack of long-term planning in federal budgeting can create mismatches between supply and demand for STEM workers. “We have not yet found ways to link industry’s workforce needs effectively and efficiently to the rate at which federal R&D investments can or should change. [If we fail] to do this, we risk severe oversupply or shortages in science and technology workforce,” he said. Gallagher elaborated on this problem in his written testimony.

He suggested the current arrangement in which universities focus on basic research and industry focuses on later-stage R&D has exacerbated mismatches between training and workforce needs. He pointed to a nascent network of advanced manufacturing institutes as a model for bringing the sectors together around pre-competitive R&D projects.

Representing the industry perspective, Khan emphasized how federally funded research at universities trains the technical workforce on which companies rely. He said the statistic that currently worries him the most is that approximately half of U.S. workers in industry that have science degrees will be eligible for retirement in a decade. “We have no line of sight today on how to replace them,” he warned.

US needs to look inward and outward, witnesses say

The witnesses also highlighted how the U.S. is no longer attracting and retaining talent from around the world as it once did.

McNutt cited the recent decline in international applications to U.S. graduate programs in science and engineering as a worrying sign, suggesting the drop is due to a “strong perception, if not the reality, that international students are not welcome here.” According to her written testimony, sharp drops have occurred in the physical sciences and engineering. She also noted that foreign-born researchers are also increasingly drawn toward better funding prospects in other countries.

Gallagher said that competitor nations have made concerted efforts to build their domestic research bases by emulating the U.S. system and are successfully drawing talent away from the U.S. He said the U.S. would benefit from systematically monitoring the research strategies of other countries as it can no longer afford to be a leader in all areas.

Given that the U.S. will not have the same supply of talent from overseas, McNutt said growing the domestic STEM workforce by drawing more women and minorities into STEM fields is increasingly important. Asked what could be done to help more women to pursue STEM careers, McNutt described how the recent National Academies report on sexual harassment opened her eyes to the “undercurrent” of more subtle forms of harassment such as "put downs" that discourage women from remaining in the field.

She suggested the White House Office of Science and Technology Policy require that every agency come up with a plan of action for changing the culture of science to root out harassment, similar to its actions on scientific integrity during the Obama administration.

The hearing was the latest in a series across Congress to broach the topic of how to better protect universities from being exploited by foreign nations, particularly China.

Asked by Babin to comment on the subject, Gallagher noted that historically the tension between the openness of the scientific enterprise and the sensitivity of some research was mitigated by the fact that universities do little classified research or intellectual property-intensive work.

“What’s happening right now is that this boundary between sensitive information versus open information is becoming blurrier, and I think the highly competitive interaction between the U.S. and China is making us relook at the risk proposition,” he continued. “I think this is an area where we’re looking for clearer guidance from the government. I think one of my big concerns now is that we’re reacting to the concern, but really without a policy strategy.”

Later asked by Rep. Michael Cloud (R-TX) how the U.S. should react to persistent cybertheft by China, Gallagher contrasted the “exfiltration of data and information” with the “exfiltration of talent,” saying he worries far more about the latter. If the U.S. does not retain a workforce capable of producing the next generation of breakthroughs, he said, “we won’t have anything that is worth exfiltrating in the future.”