Congress released its final appropriations package for fiscal year 2020 yesterday, which includes substantial budget increases for many science agencies. Lawmakers are expected to finish voting on the legislation by the end of the week. 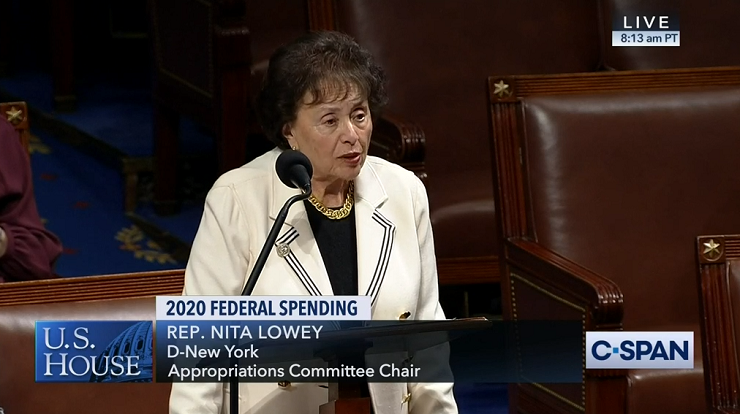 House Appropriations Committee Chair Nita Lowey (D-NY) speaking today on the House floor. The chamber passed the two bills that will fund the federal government in fiscal year 2020 on votes of 280 to 138 and 297 to 120, sending them to the Senate.

Congress has completed its work on appropriations for fiscal year 2020 and is expected to pass two bills this week covering all federal agencies. Several science agencies will receive budget increases that are proportionally comparable to the increase in federal spending caps that Congress agreed to last summer. Some will see larger increases, including the Department of Energy, National Institutes of Health, and U.S. Geological Survey.

The text of the bills and the accompanying explanatory statements, which provide detailed funding and policy direction, are available here. Direction provided earlier this year in the House and Senate committee reports on their spending proposals will also apply unless superseded by new language. Links to those reports as well as tables summarizing final funding outcomes are available in the FYI Federal Science Budget Tracker.

FYI will publish a series of bulletins in the new year reviewing outcomes on an agency-by-agency basis. An overview of selected agency highlights follows below. 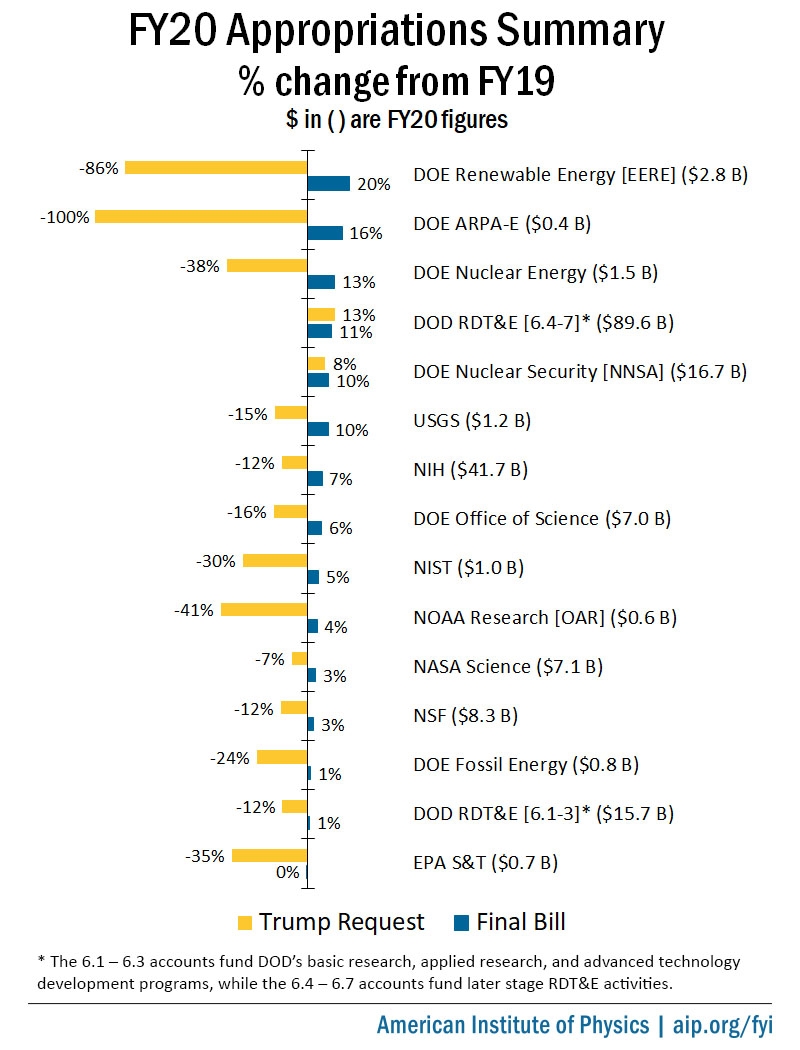 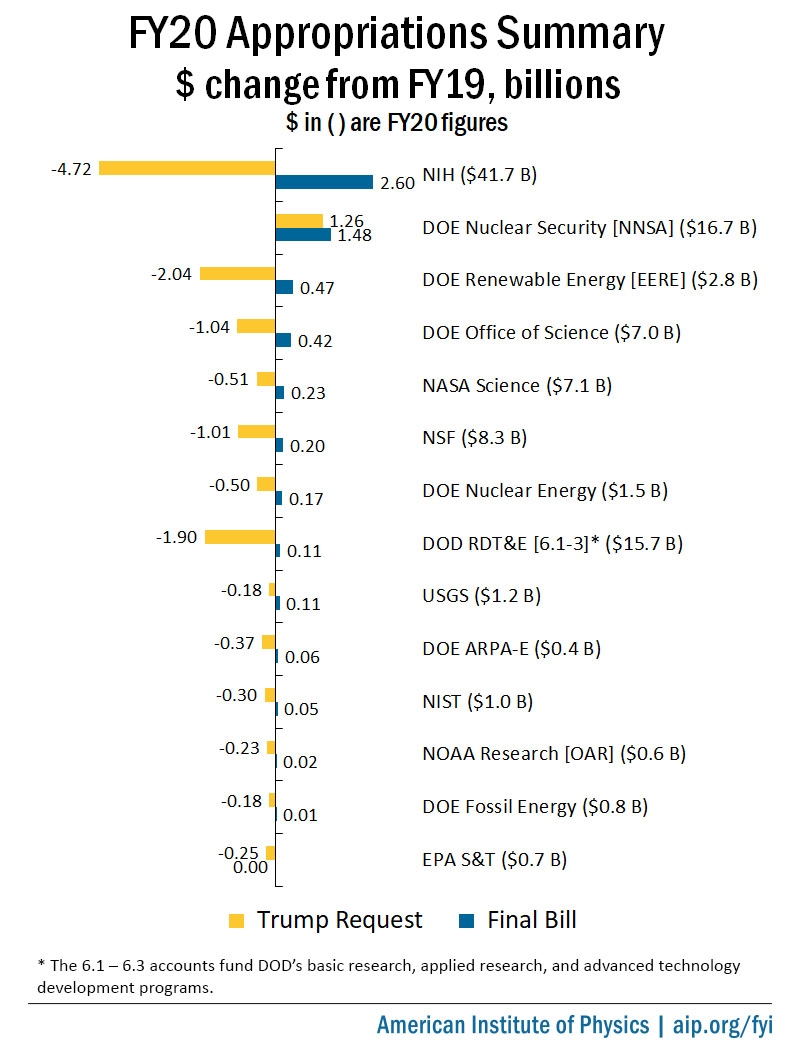 Department of Energy Office of Science

The office will receive a 6% increase, bringing its budget to an even $7 billion. Since fiscal year 2017, its budget has increased by 30%, or more than $1.6 billion. Most program offices will receive increases in line with the overall increase. However, Fusion Energy Sciences will receive a significantly larger boost of 19% to accommodate an increase in the U.S. contribution to the France-based ITER project from $132 million to $242 million, with at least $85 million set aside for cash contributions. The bill also accepts the Senate proposal to allocate $195 million from across the office’s programs to quantum information science, including $75 million for establishing up to five research centers, as called for in the National Quantum Initiative Act. A further $71 million is directed to artificial intelligence and machine learning.

DOE’s applied R&D programs will receive large increases this year, nearly matching the Senate’s proposals for even larger increases in most instances. Sen. Lamar Alexander (R-TN), who is entering his last year as chair of the Senate appropriations subcommittee for DOE, recently said he would like federal energy R&D funding to double within five years as a way to address climate change. This year, the budget for the Office of Energy Efficiency and Renewable Energy will increase 20% to $2.85 billion, not accounting for a $58 million rescission of unused funds that were appropriated for biorefinery construction. The Office of Nuclear Energy will receive a 13% increase to $1.49 billion, which includes $230 million for a new program to support advanced reactor demonstration projects. The budget for the Advanced Research Projects Agency–Energy will increase 16% to a new record high of $425 million.

NNSA’s budget will increase 10% to $16.7 billion, building on a multi-year spending surge supporting modernization of the U.S. nuclear weapons stockpile and associated infrastructure. Funding for Research, Development, Test, and Evaluation programs will rise 19% this year to $2.40 billion. Most of that increase is directed toward science, engineering, and advanced computing programs, including doubled funding for the Stockpile Responsiveness Program and a near tripling of support for a project developing new capabilities for studying subcritical nuclear explosions. Inertial confinement fusion activities will see a more modest increase of 4% to $565 million, targeted toward pulsed power programs.

The budgets for NSF’s research and education accounts will both increase 3%, to $6.74 billion and $940 million respectively. The bill also meets the agency’s requests for continuing construction of the Large Synoptic Survey Telescope in Chile, modernizing Antarctic infrastructure, and beginning its contribution to the Large Hadron Collider’s high luminosity upgrade project in Europe. It further provides $65 million through the construction account to launch a new mid-scale research infrastructure program, which is $20 million more than requested.

Funding for NASA’s Science Mission Directorate will increase 3% to $7.14 billion, not accounting for a $70 million rescission. The appropriation includes full funding for the James Webb Space Telescope, Wide Field Infrared Survey Telescope, and Europa Clipper missions. Congress continues to require NASA to use the Space Launch System (SLS) rocket it is developing to launch the Clipper and a follow-on lander mission but pushes back the missions’ respective target launch dates by two years, to 2025 and 2027. Following the Senate’s lead, Congress is significantly increasing funding for human exploration activities, including the SLS program, but will not provide all that NASA indicated it needs to meet the goal of returning astronauts to the Moon in 2024.

With a 7% increase bringing the NIH budget to $41.7 billion, the agency will see its fifth straight year of multi-billion dollar growth. The increase is distributed across the agency’s institutes and includes dedicated funding for major initiatives in cancer, brain, and precision medicine research. Congress also directs NIH to “implement measures that attend to harassment in extramural settings with the same level of attention and resources as those devoted to other research misconduct” and to require that grantee institutions notify the agency when key project personnel are removed due to “sexual harassment concerns.”

Congress is continuing to provide large funding increases for DOD’s Research, Development, Test, and Evaluation accounts this year, adding more than $9 billion, a 10% increase, for a total of $105 billion. Since fiscal year 2017, annual funding for RDT&E has increased by $32 billion, or 43%. These increases have been driven by an interest in increasing the speed with which DOD transitions new technologies into acquisition programs. Within these amounts, funding for the early-stage “Science and Technology” accounts has grown more moderately and is set to rise this year by 1% to $16.1 billion. Within that, basic research funding will increase 3% to $2.6 billion.

The NIST budget will rise 5% to just above $1 billion, with its laboratory programs receiving the lion’s share of the $49 million increase. Of the increase, the bill directs NIST to allocate $10 million to quantum information science and $8 million to artificial intelligence research. The budget for facilities construction will increase 11% to $118 million, of which $43 million is for renovation of Building 1 on NIST’s campus in Boulder, Colorado, with the remaining $75 million going to maintenance and repair projects.

NOAA’s budget will drop 1% to $5.35 billion owing to a planned ramp down in weather satellite acquisition programs, while funding for the Office of Oceanic and Atmospheric Research will increase 4% to $590 million. Most of that increase is directed toward climate and oceans research programs. The office’s budget for weather and air chemistry research will decrease marginally, though the bill supports the proposed Earth Prediction Innovation Center, directing NOAA to allocate at least $8 million for the effort.

The budget for USGS will jump 10% to $1.27 billion, with increases distributed across the agency’s seven mission areas. The bill rejects the administration’s request to consolidate the mission areas, stating more information is needed to evaluate whether the proposal would increase efficiency. The bill also provides a large increase to the facilities account to construct a Hydrologic Instrumentation Facility, renovate a biosafety lab, and rebuild facilities damaged by the 2018 eruption of the Kilauea volcano.

Science and Technology Advice to Congress

Congress is not providing funding to revive the Office of Technology Assessment as the House had proposed. However, it states that stakeholders in Congress will “continue to evaluate” recommendations from a recent report by the National Academy of Public Administration for addressing gaps in Congress’ access to science and technology expertise. Congress is also increasing funding for the Government Accountability Office by $40 million, noting it will allow the office to continue to enhance its work on S&T issues.