Incipient efforts to promote energy innovation are beginning to take shape in the Senate as the recent wave of congressional interest in climate change continues to swell. Key senators have now agreed in principle that a sizeable funding increase is warranted. Meanwhile, the Energy and Natural Resources Committee is pushing bills promoting the development of new nuclear and fossil energy technologies, and its leaders say they expect to expand their work to encompass additional technology areas.

Proponents of these efforts say their aim is to combat climate change in a way that is more practical than the Green New Deal concept backed by many Democrats, and last month Senate Majority Leader Mitch McConnell (R-KY) echoed that position. Asked by a reporter if he believes humans are contributing to climate change, he replied, “I do. The question is how do you address it. … The way to do this consistent with American values and American capitalism is through technology and innovation.”

Despite the momentum behind them, proponents of the new efforts will still have to navigate a swirl of ideological currents to see their proposals become law. While an increasing number of Republicans say it is important to address climate change, the party is far from a consensus on the matter. Also, although emphasizing energy innovation meshes with the Trump administration’s promotion of a “New American Energy Era,” the White House has regarded energy R&D as an area where federal spending should decrease. And Democrats will doubtless push to include their own priorities in any major legislation, further complicating the political calculus. 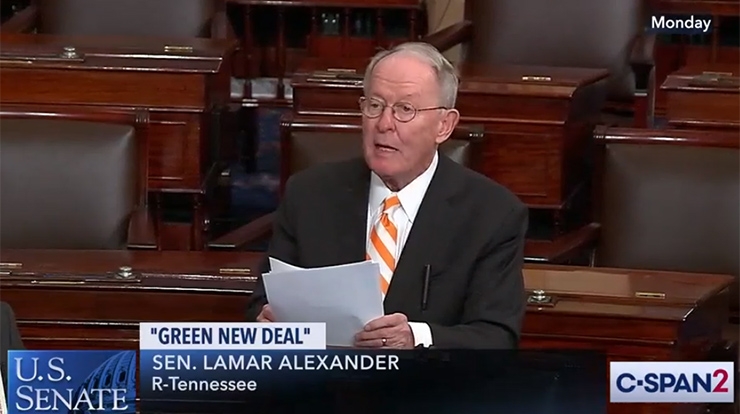 Speaking on the Senate floor on March 25, Sen. Lamar Alexander (R-TN) calls for a “New Manhattan Project for Clean Energy.”

Alexander has often proposed such large-scale increases in Department of Energy R&D funding, going back to shortly after he joined the Senate in 2003. His use of the “Manhattan Project” terminology dates back to 2008. As recently as 2016, he proposed doubling the DOE Office of Science budget and paying for it by prematurely terminating the wind energy production tax credit.

As chair of the Senate appropriations subcommittee for DOE, Alexander has a strong platform from which to push his plans. However, his budgetary power is constrained by the total amount of discretionary funding that Senate leaders allocate to the subcommittee and by the need to gain broad assent for his proposals. Thus, although Alexander has often marshaled strong budgets for DOE, he has never realized his more ambitious goals. He is now down to his final opportunities, having announced he will retire at the end of this Congress.

Alexander’s aims could also be achieved through a dedicated funding mechanism, such as a special fee or tax, which would have to be created outside the appropriations process. Former Energy Secretary Ernest Moniz recommended such mechanisms to the Senate Energy and Natural Resources Committee at a hearing in early February, but it is unclear whether committee leaders are seriously considering the idea.

At a hearing on April 11, Senate Energy and Natural Resources Committee Chair Lisa Murkowski (R-AK) said she is “all in on what Sen. Alexander has proposed in terms of increasing the funding for research and development.” Most of the discussion, though, revolved not around funding but rather how Congress can best promote technology commercialization. “You can have all the great technology, but if we don’t have deployment out there, we haven’t even started to leave the house yet,” Murkowski said.

Committee Ranking Member Joe Manchin (D-WV) and Alexander, who is also on the committee, both stressed the need to look to near-term opportunities to export carbon-reducing technologies to countries that are rapidly increasing energy production, often using fossil fuels. Manchin referred to such recent efforts as the Petra Nova carbon capture project and the experimental NET Power emissions-free natural gas power plant as “shining examples of what’s possible.”

Manchin also announced his introduction of the Enhancing Fossil Fuel Energy Carbon Technology (EFFECT) Act with Murkowski and three other Republicans. The bill would establish a unified Coal and Natural Gas Technology Program within DOE that would support an R&D program, a large-scale pilot project, demonstration projects, and a front-end engineering and design program. It would recommend initial annual funding of $727 million, whereas DOE currently spends about $300 million on its coal and natural gas technology programs. Manchin’s bill would also back smaller R&D programs in carbon capture, storage, and utilization.

Coal plays a significant role in the economy of Manchin’s state, which is also home to a branch of the National Energy Technology Laboratory, the focal point for DOE’s fossil energy R&D. He made clear at the hearing that his support for legislation is predicated on its ability to serve his constituents and people like them, saying,

If the solution to the climate crisis leaves West Virginia coal communities behind, then it is not a solution — and any community that’s left behind. As we move forward with the climate conversation, I’m going to continue to consider global, national, and regional perspectives.

Two other bipartisan bills supporting fossil fuel-related technologies have also been introduced this year. The Rare Earth Element Advanced Coal Technologies (REEACT) Act sponsored by Manchin, Murkowski, and Sen. Shelley Moore Capito (R-WV) would back ongoing R&D related to the extraction of rare earth elements from coal and coal byproducts. The Utilizing Significant Emissions with Innovative Technologies (USE IT) Act sponsored by Sens. John Barrasso (R-WY) and Sheldon Whitehouse (D-RI) and 12 other senators would direct the Environmental Protection Agency to promote R&D on technologies that capture carbon dioxide from the atmosphere and transform carbon dioxide emissions into commercial products.

Aside from fossil energy, the committee has also moved quickly to support advanced nuclear reactor development, reintroducing Murkowski’s bipartisan Nuclear Energy Leadership Act. Among its provisions, the new version of the bill would direct DOE to complete two advanced reactor demonstrations by the end of 2025 and between two and five additional demonstrations by the end of 2035. 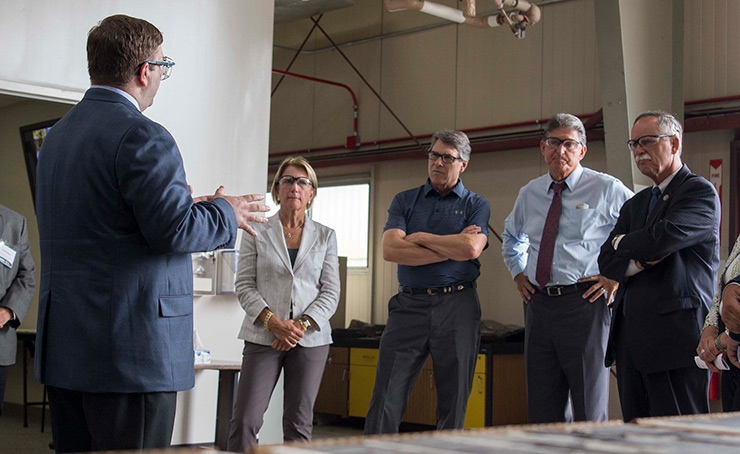 Efforts poised to continue in months ahead

Manchin noted at the April hearing that the committee intends to press ahead quickly on energy innovation, saying there will be additional hearings focusing on carbon capture, nuclear energy, renewable energy, energy efficiency, and energy storage.

The day after the hearing, Manchin wrote to the Government Accountability Office, asking it to review DOE’s energy technology research, development, and deployment (RD&D) programs “with a specific focus on whether the Department is setting and achieving goals for technology readiness, commercialization, de-risking, and deployment.” He wrote, “The review should also consider how — and how well — DOE addresses the so-called ‘valley of death’ and other obstacles to financing and commercializing technologies at each stage of its RD&D activities and across its portfolio.”

GAO reviews often take many months to complete, particularly when they are as broad in scope as the one Manchin has requested. If the results are to inform the committee’s legislative efforts, it could be some time before the committee’s work on energy innovation reaches full fruition.