Today President Trump issued an executive order reestablishing the President’s Council of Advisors on Science and Technology and appointed its first seven members, who together have substantial experience in industrial research, artificial intelligence, and quantum information science.

President Trump issued an executive order today reconstituting the President’s Council of Advisors on Science and Technology (PCAST). Comprising eminent volunteer experts from outside the federal government, the role of the council is to advise the White House and conduct studies on its behalf.

In reestablishing PCAST, Trump is following a precedent set by all of his predecessors going back to President George H. W. Bush, who appointed the first PCAST in 1990. Before then, most other recent presidents employed analogous bodies, beginning with President Dwight Eisenhower’s creation of the President’s Science Advisory Committee in 1957.

The announcement of the new PCAST brings to a close a period of more than 33 months since President Barack Obama’s council held its final meeting in January 2017. The White House has not yet set a date for the new council’s first meeting or indicated what its initial tasks will be.

Most new members have industry backgrounds

In addition to reconstituting PCAST, Trump also appointed seven of its members. A White House press release noted the council will ultimately have 16 members in total and stated there are plans to announce more members in the “near future,” pending their completion of the clearance process.

Kelvin Droegemeier, the director of the White House Office of Science and Technology Policy, will serve ex officio as the chair and 17th member of PCAST. Several themes that he has championed in his public remarks are repeated in Trump’s order, including the importance of private enterprise in the U.S. “ecosystem of innovation,” and the need to integrate “American values” with science and technology.

Six of the seven new appointees currently work in corporate settings, reflecting the Trump administration’s interest in fostering private-sector innovation. However, OSTP indicated the next group of appointees will include “several” additional academic researchers. A number of the new members are also experts in emerging technology areas specifically mentioned in Trump’s order: artificial intelligence and quantum information science. 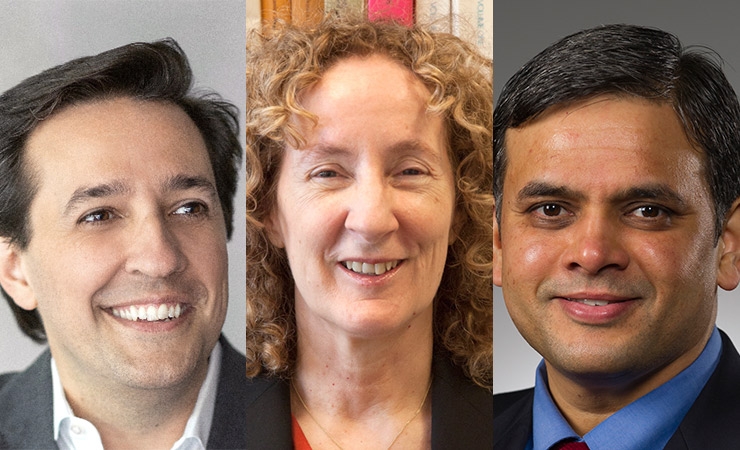 Among the new appointees to PCAST, Dario Gil (left) and Birgitta Whaley (middle), are experts in quantum information science. A.N. Sreeram (right) has a background in electronics engineering and has held R&D leadership positions at both Dow and DuPont.

K. Birgitta Whaley is a chemistry professor at the University of California, Berkeley, and a scientist at Lawrence Berkeley National Laboratory. Her research focuses on quantum information and quantum effects in biological and chemical systems. She received her doctorate in chemical physics from the University of Chicago in 1984, and she was elected a fellow of the American Physical Society in 2002 for her contributions to “theoretical understanding of quantum nanoscale phenomena, especially in superfluid helium droplets, and to control of decoherence in quantum information processing.” She currently is co-director of the Berkeley Quantum Information and Computation Center, which she established in 2004.

Dario Gil is director of IBM Research, a global system of industrial laboratories employing more than 3,000 researchers. Gil has worked at IBM’s Thomas Watson Research Center in Yorktown Heights, New York, since receiving his doctorate in electrical engineering and computer science from MIT in 2003. Prior to assuming his current role, he led IBM’s AI and quantum computing research groups. Gil was featured in a New York Times article this week on corporate research efforts in quantum computing. He testified before the Senate on IBM’s research in machine learning and artificial intelligence in 2017.

A.N. Sreeram is a senior vice president at the Dow chemical company, where he manages an R&D portfolio with an annual budget exceeding $1 billion. Prior to joining Dow in 2006, Sreeram worked at DuPont Electronic Technologies and Cookson Electronics, and began his career as a researcher in ceramics and electronics after earning a doctorate in materials science and engineering at MIT.

Sharon Hrynkow is chief scientific officer at Cyclo Therapeutics, Inc., a biotech company that focuses on rare diseases. Hrynkow spent much of her career in the federal government, joining the State Department in 1995 as a science officer and later moving to the National Institutes of Health’s Fogarty International Center, where she served as its deputy director from 2000 to 2007. After returning to the State Department as a senior science advisor from 2010 to 2012, she left government to start a nonprofit organization focused on developing treatments for pandemic diseases. She earned a doctorate in neuroscience from the University of Connecticut in 1990.

H. Fisk Johnson is the CEO of S. C. Johnson & Son, Inc., a multinational chemicals and household products manufacturing company, which his family founded and still owns. Johnson joined the company in 1987 after receiving a doctorate in applied physics and a master’s in business administration from Cornell University. He has been a member of the President’s Advisory Committee for Trade Policy and Negotiation since 2002.

Catherine Bessant is the chief operations and technology officer at Bank of America, where she has spent her entire career. In 2018, she helped form a Council on the Responsible Use of Artificial Intelligence through Harvard University’s Belfer Center for Science and International Affairs. The council is examining topics such as algorithmic bias and transparency, worker displacement, and data privacy. She earned a bachelor’s degree in business administration from the University of Michigan in 1982.

Shane Wall is chief technology officer for HP and director of HP Labs, which conducts research in artificial intelligence, user-machine interfaces, 3D-printing, and cybersecurity. He earned a bachelor’s degree in computer science and engineering from Oregon State University in 1988.

The White House also announced today that the staff director for the council will be Edward McGinnis, who was previously acting director of the Department of Energy’s Office of Nuclear Energy.