The National Science Foundation budget is increasing 2.5% to $8.3 billion for fiscal year 2020. The appropriation includes funding for a new mid-scale research infrastructure program and NSF’s first contribution to a major detector upgrade project at the Large Hadron Collider.

In the appropriations legislation it passed last month for fiscal year 2020, Congress increased the National Science Foundation budget by 2.5% to $8.3 billion, just under the amount the Senate had proposed and well short of the 7% increase sought by the House.

The additional funding is targeted toward accounts funding research and education programs. Meanwhile, the account for major facilities construction will drop by a fifth, reflecting the completion of the Daniel K. Inouye Solar Telescope and Regional Class Research Vessels projects. The appropriation meets all of NSF’s funding requests for new and ongoing facility projects and exceeds what the agency sought for its new mid-scale research infrastructure program.

An explanatory statement accompanying the bill provides funding and policy direction, and the House and Senate appropriations committee reports on their respective spending bills convey additional direction unless the language is negated in the final statement. For summary tables, consult the FYI Federal Science Budget Tracker.

NSF’s Research and Related Activities account, which funds six disciplinary research directorates, is increasing 3% to $6.7 billion. Per custom, Congress does not specify how NSF should distribute funding across these directorates and their component divisions. It does, however, provide policy guidance on selected matters.

Big Ideas and core research. Since 2016, NSF has employed a framework called the “10 Big Ideas” as a way to promote and coordinate interdisciplinary research, which has led to concerns that the effort could siphon budgetary resources from NSF’s “core” research funding programs. Both committee reports reiterate language from last year’s legislation directing NSF to use the Big Ideas as a “focusing tool” while maintaining support for other activities. The House report directs NSF to provide no less than fiscal year 2019 levels to “existing scientific research, research laboratories, observational networks, and other research infrastructure assets,” while the Senate directs it to fund “core research” at no less than fiscal year 2017 levels. The final report “reiterates House and Senate report language regarding support for existing NSF research and research infrastructure and clarifies that this language excludes funding allocated in fiscal year 2019 for one-time upgrades or refurbishments.”

Facility operation transition program. To mitigate the burden of rising facility operations and maintenance costs, NSF requested $10 million to launch a pilot program that offers partial support for operations of new facilities and divestment from lower-priority ones. The House and Senate both state they support the program. According to NSF’s budget request, $8 million of the amount will go toward NSF facilities within the first five years of their operational life: the Daniel K. Inouye Solar Telescope, Ocean Observatories Initiative, and National Ecological Observatory Network. The remainder will support “analysis of NSF’s facilities portfolio in order to determine science priorities and divestment opportunities, as well as investments in actual divestment activities.”

Quantum research. Both reports express support for NSF’s work to implement the National Quantum Initiative Act, which directs the agency to create between two and five quantum research centers, each funded at up to $10 million per year. The Senate report recommends NSF spend at least $106 million on quantum information science, equal to the amount it requested, and directs that $50 million should go to funding “up to five” research centers. The report also encourages NSF to create the centers in regions where “close collaboration with industry is possible” and encourages the agency to consider establishing centers focused on “trapped ion quantum computing and/or the optics underlying it, superconducting quantum computing, and other promising technologies.”

EPSCoR. The Established Program to Stimulate Competitive Research supports projects in states that have historically received a relatively small share of federal grant dollars. Congress directs NSF to provide the program $190 million, an 8% increase. The Senate report further expresses support for NSF reexamining the program’s eligibility criteria, adding that NSF should inform Congress before removing a state from eligibility.

Innovation Corps. Congress provides a $5 million increase to the Innovation Corps program, which teaches entrepreneurial skills to scientists and engineers. The legislation also encourages NSF to “facilitate greater participation in the program from academic institutions in states that have not previously received awards.”

Neutron detection network. To ensure the adequacy of the network of neutron detectors deployed by NSF and partner agencies for monitoring solar activity, NSF is directed to consider entering a multiagency arrangement similar to the one that provides for continuous operation of the Global Oscillation Network Group, a solar telescope network.

Low-energy nuclear reactions. The House report encourages NSF to “evaluate the various theories, experiments, and scientific literature surrounding the field of LENR,” which is most associated with the pursuit of cold fusion. It also directs NSF to “provide a set of recommendations as to whether future federal investment into LENR research would be prudent, and if so, a plan for how that investment would be best utilized.” 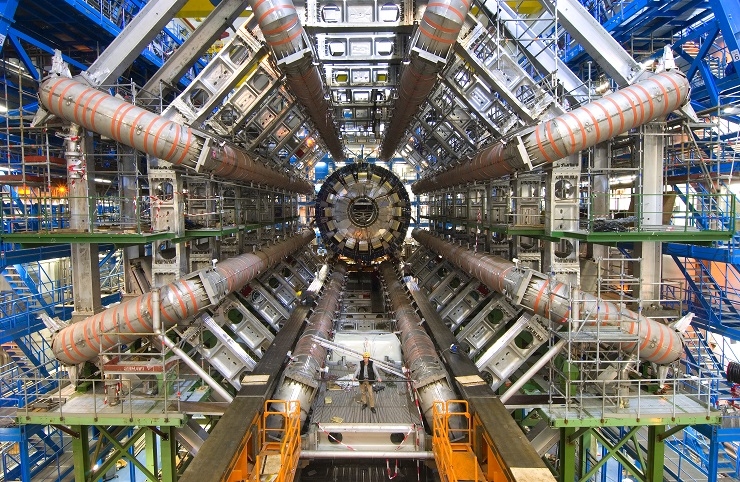 ATLAS is one of two flagship detectors at the Large Hadron Collider that will receive funding through an upgrade project financed by NSF’s major facility construction account.

Congress is providing $243 million for the Major Research Equipment and Facility Construction account, which is $53 million less than last year.

LHC detector upgrades. The appropriation provides the $33 million NSF requested to begin its five year, $150 million contribution to upgrades for ATLAS and CMS detectors at the Large Hadron Collider in Europe, which will prepare them for a corresponding high luminosity upgrade to the collider’s beams. The Department of Energy is providing $100 million to the detector and collider upgrades this year.

Continuing projects. The appropriation also meets NSF’s requested amounts of $46 million to continue construction of the Large Synoptic Survey Telescope in Chile and $98 million for revitalizing infrastructure at the McMurdo research station in Antarctica.

Mid-scale research infrastructure. NSF requested $45 million through the MREFC account for a new agency-wide program dedicated to supporting “mid-scale” research infrastructure that costs between $20 million and $70 million. Congress is providing $65 million, and via Senate report language encourages NSF to award at least one project to an institution located in an EPSCoR state.

Outside of the MREFC account, NSF also requested $30 million for another new agency-wide program dedicated to funding mid-scale research infrastructure costing between $6 million and $20 million. The Senate report indicates it “fully funds” this program and again encourages NSF to make at least one award in an EPSCoR state. NSF issued the program’s first 10 awards in September.

Infrastructure planning. The House committee encourages NSF to produce a “comprehensive and prioritized list of large-scale facilities requested by NSF-supported science disciplines,” stating it is “concerned” about the agency’s planning for the next generation of facilities, “including ground-based telescopes.” The Senate committee includes analogous language specific to high-performance computing infrastructure, stating it is concerned NSF’s investments in this area “fall short of scientific and engineering needs.”

Minority-serving institutions. The final legislation provides $45 million for the recently created Hispanic Serving Institutions program, $5 million over last year, and adopts Senate report language directing NSF to “build capacity at institutions of higher education that typically do not receive high levels of NSF funding.” The House report also notes NSF does not have a program dedicated to Asian American and Native American Pacific Islander-Serving Institutions and encourages the agency to increase grant funding opportunities for such schools.

Career and technical education. The bill meets NSF’s request to increase the Advanced Technological Education program budget to $75 million, which is $9 million more than what Congress specified last year. The program supports technician training in STEM fields at institutions that grant two-year degrees, which is an area NSF has recently emphasized.

Scholarships and fellowships. The Robert Noyce Teacher Scholarships program is allocated $67 million, a $2.5 million increase over last year. Via Senate report language, NSF is directed to maintain support for the Graduate Research Fellowship Program at its fiscal year 2019 level.