Congress is seeking to increase the budget for the National Science Foundation’s research and education programs in fiscal year 2020, with the House proposing a 7% overall budget increase to $8.6 billion and the Senate a 3% increase.

House and Senate appropriators are seeking to expand support for the National Science Foundation in fiscal year 2020, rejecting the Trump administration’s request to shave 12% from the agency’s current budget of $8.1 billion. The Senate Appropriations Committee unanimously approved a spending bill for NSF last month that would provide a 3% overall increase to $8.3 billion, while the House passed a bill in June proposing a 7% increase to $8.6 billion.

Most of the additional resources would go toward research and education accounts, while major construction projects would be fully funded. It may be months, though, before the two bills are reconciled. Because fiscal year 2019 appropriations expired on Oct. 1, Congress bought time for further negotiations last week by passing stopgap legislation that funds the government at current levels through Nov. 21. 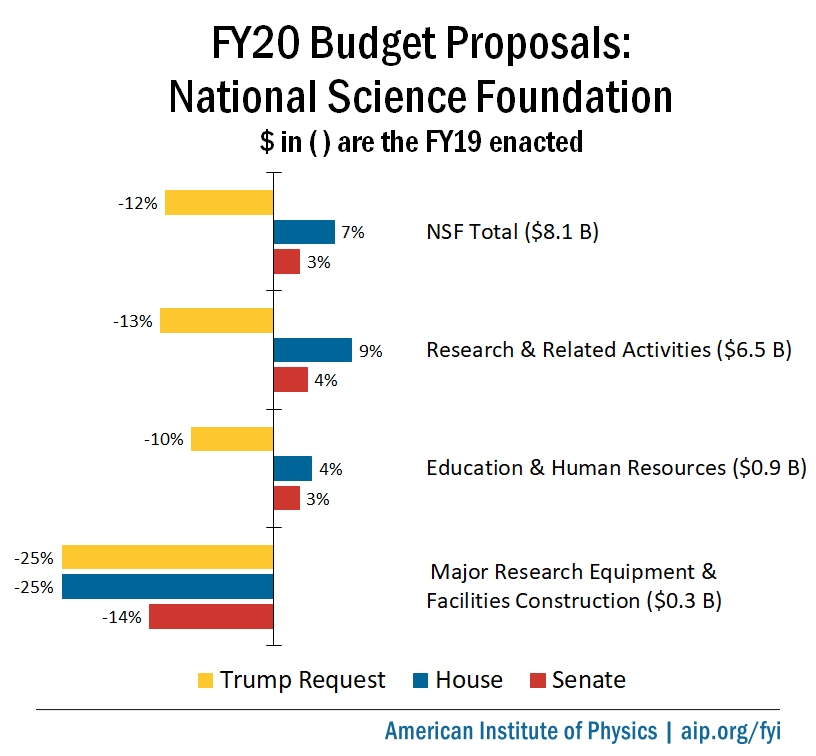 NSF’s Research and Related Activities account funds six disciplinary research directorates that span all fields of fundamental science and engineering except for biomedical research. The House proposes to increase the account by 9% to $7.1 billion while the Senate proposes a 4% increase to $6.8 billion.

Discipline-specific support. Congress typically does not specify how much NSF must spend on each directorate, giving the agency substantial discretion to allocate its budget. The agency made the fiscal year 2019 amounts public in August, and they are recorded in FYI’s budget tracker. On occasion, though, the appropriations committees do offer a sense of their priorities and place bounds on spending for certain disciplines.

The House report reiterates language from last year’s spending bill that praises the physical sciences, stating, “The committee believes that strategic investments in the physical sciences are vitally important for the United States to remain the global leader in innovation, productivity, economic growth, and high-paying jobs for the future.”

The committee also expresses support for NSF’s social sciences directorate and instructs the agency to fund it at no less than current levels. In justifying the move, the report states, “[The directorate] funds over half of our nation’s university-based social and behavioral science research but remains the smallest of NSF directorates. The committee believes this research provides an evidence-based understanding of the human condition, resulting in more-informed policymaking and better-informed spending on a full range of national issues.”

Big Ideas and core research. Since 2016, NSF has pursued “10 Big Ideas” that are intended to spur interdisciplinary research and complement the agency’s “core” research activities. Both the committee reports reiterate language from last year’s legislation directing NSF to use the Big Ideas as a “focusing tool” while maintaining support for other activities.

The House report directs NSF to provide no less than fiscal year 2019 levels to “existing scientific research, research laboratories, observational networks, and other research infrastructure assets,” while the Senate directs it to fund “core research” at fiscal year 2017 levels or higher. The Senate report also indicates the committee expects the extra resources proposed for fiscal year 2020 are “more than adequate to continue basic research and allow NSF to position the United States to continue as a global science and engineering leader using the 10 Big Ideas framework.”

Quantum research. Both committees declare their support for NSF’s work to implement the National Quantum Initiative Act, which directs the agency to create between two and five quantum research centers funded at up to $10 million each. NSF requested $106 million for quantum information science in fiscal year 2020 and is currently gearing up to fund new research centers through its Quantum Leap Challenge Institutes program.

The Senate report recommends NSF spend at least $106 million and specifies that this amount includes $50 million for “up to five” research centers. It also encourages NSF to create the centers in regions where “close collaboration with industry is possible” and encourages the agency to consider establishing centers focused on “trapped ion quantum computing and/or the optics underlying it, superconducting quantum computing, and other promising technologies.” The House report uses more general language recommending NSF spend no less than the amount it allocated to quantum research in fiscal year 2019.

Astronomy research. Repeating direction from last year, the House report instructs NSF to provide at least level funding to programs and facilities in the Astronomical Sciences Division. The Senate report offers more general direction, stating, “As NSF determines the appropriate levels of support for astronomy research grants by scientists and students engaged in ground-breaking research, the committee expects NSF to continue its support of world-class scientific research facilities and instrumentation to maximize its investments in research while preliminarily preparing for facility upgrades and activities associated with supporting the next Astrophysics decadal [survey].”

EPSCoR. The Established Program to Stimulate Competitive Research supports projects in states that have historically received a relatively small share of federal grant dollars. Funding for the program would increase 1% to $178 million under the House bill, while the Senate directs NSF to provide it with at least $190 million, an 8% increase. The Senate report also expresses support for NSF reexamining the program’s eligibility criteria, adding that, “in order to maintain certainty for EPSCoR states, the committee directs NSF to share the findings of its reexamination with Congress before taking any action to remove a state from the program.” 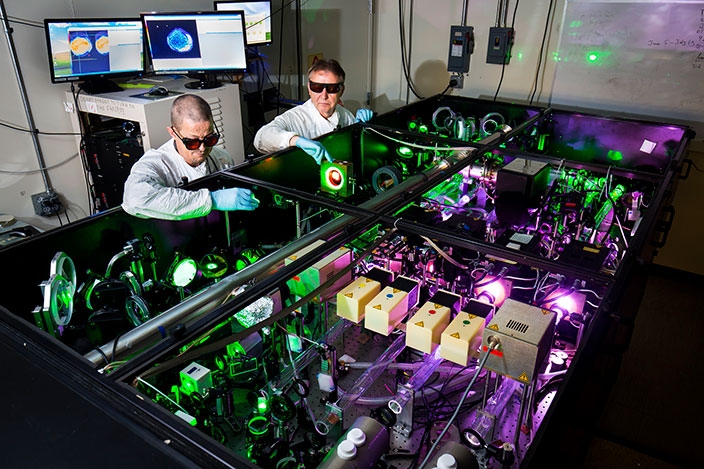 NSF is funding a $16 million upgrade to the HERCULES laser at the University of Michigan through a new agency-wide mid-scale research infrastructure program.

Major facilities. Research infrastructure costing more than $70 million is funded through the agency-wide Major Research Equipment and Facility Construction (MREFC) account. Both the House and Senate match NSF’s requested amounts of $46 million to continue construction of the Large Synoptic Survey Telescope in Chile, $33 million for detector upgrades at the Large Hadron Collider in Switzerland, and $98 million for revitalizing infrastructure at the McMurdo research station in Antarctica.

Mid-scale research infrastructure. For the first time, NSF also requested funds through the MREFC account for a new agency-wide program dedicated to supporting “mid-scale” research infrastructure that costs between $20 million and $70 million. The House matches the $45 million requested to launch the program, while the Senate provides an additional $30 million and encourages NSF to award at least one project to an institution located in an EPSCoR state.

Outside of the MREFC account, NSF also requested $30 million for a separate new agency-wide program dedicated to funding mid-scale research infrastructure costing between $6 million and $20 million. The Senate report indicates it “fully funds” this program and again encourages NSF to make at least one award in an EPSCoR state. NSF issued the program’s first 10 awards last month, which total $121 million.

Facility operation transition program. To mitigate the burden of rising facility operations and maintenance costs, NSF requested $10 million to launch a pilot program that will offer partial support for operations of new facilities and divestment from lower-priority ones. The House and Senate both state they support the program.

Infrastructure planning. The House committee encourages NSF to produce a “comprehensive and prioritized list of large-scale facilities requested by NSF-supported science disciplines,” stating it is “concerned” about the agency’s planning for the next-generation of facilities, “including ground-based telescopes.” The Senate committee includes analogous language specific to high-performance computing infrastructure, stating it is concerned NSF’s investments in this area “fall short of scientific and engineering needs.”

Neutron detection network. The Senate report raises concerns about the status of ground-based neutron monitoring networks in the U.S., noting their contributions to space weather research. It directs NSF to produce a plan for ensuring the number of neutron detectors deployed can “adequately characterize the radiation environment and support a real-time alert and warning system.”

Through its Education and Human Resources account, NSF funds research capacity building efforts at minority-serving institutions, STEM education pedagogy research, and various fellowship programs. Its budget would increase 4% to $950 million under the House bill and 3% to $937 million under the Senate bill.

Minority-serving institutions. The Senate report specifies level funding of $46 million for the Louis Stokes Alliances for Minority Participation, $35 million for the Historically Black Colleges and Universities program, $15 million for the Tribal Colleges and Universities program, and $40 million for the recently created Hispanic Serving Institutions program. For these same programs, the House report directs NSF to spend no less than $48.5 million, $38 million, $15 million, and $45 million, respectively. It also notes NSF does not have a program dedicated to Asian American and Native American Pacific Islander-Serving Institutions and encourages the agency to increase grant funding opportunities for such schools.

Broadening participation. Both the House and Senate indicate they support the INCLUDES program, NSF’s marquee effort to increase participation of underrepresented groups in STEM fields. The Senate matches the requested level of $20 million, equal to the amount Congress specified last year, and the House recommends the program receive no less than that amount.

Career and technical education. The Senate meets NSF’s request to increase the Advanced Technological Education program budget to $75 million. The program supports training of technicians in STEM fields at institutions that grant two-year degrees, which is an area NSF has recently emphasized.

Fellowships. The Senate report specifies the Graduate Research Fellowship Program and the Robert Noyce Teacher Scholarship Program should receive level funding. NSF requested to significantly pare back these programs due to the proposed reduction in the agency’s overall budget.