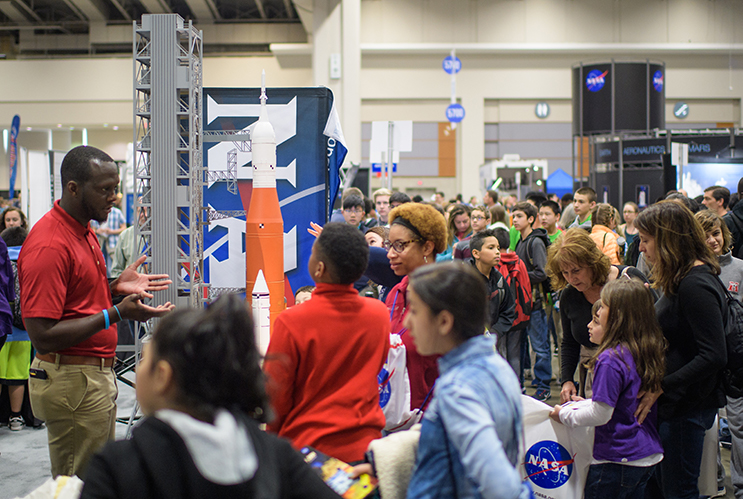 Budgets for major federal STEM education programs are generally rising following the enactment of appropriations for fiscal year 2020 late last year. Congress has now for the third time rejected the Trump administration’s proposals to cut funding across various programs and disband the education offices at NASA and the National Oceanic and Atmospheric Administration.

Tables detailing funding outcomes for specific programs are available in FYI’s Federal Science Budget Tracker. The tracker also includes links to the explanatory statement accompanying Congress’ appropriations legislation and the House and Senate reports on their original proposals, all of which convey detailed funding and policy direction. Outcomes for selected departments and agencies are summarized below.

Formula grants. Congress rejected the Trump administration’s request to terminate three major grant programs that states and school districts can use to support a variety of STEM and non-STEM education activities. Instead, it provides a 3% budget increase for the $1.2 billion Student Support and Academic Enrichment Grants program, a 4% increase for the $2.1 billion Supporting Effective Instruction State Grants program, and a 2% increase for the $1.2 billion 21st Century Community Learning Centers program. Eligible uses of funding from these programs include, respectively, support for STEM-focused schools, STEM teacher professional development, and out-of-school STEM enrichment activities.

Education and Innovation Research. As one of the priority initiatives in its budget request, the Department of Education proposed to expand the Education Innovation and Research program budget from $130 million to $300 million, with $100 million dedicated to supporting field projects that promote “reform” in STEM education. Congress partially met the request, providing $190 million for the program, of which $65 million supports “STEM and computer science education activities,” a $5 million increase over the amount Congress specified for fiscal year 2019.

The department is directed to use these funds to “expand opportunities for underrepresented students such as minorities, girls, and youth from families living at or below the poverty line to help reduce the enrollment and achievement gap.” Congress also directs the department to ensure the funds are awarded to “diverse geographic areas” and continue prioritizing computer science education projects through the grant competition.

Teacher professional development. Another STEM-focused initiative included in the budget request was to reorient the Teacher and School Leader Incentive Grant program, which supports the development of human capital management systems at schools. The administration proposed to dedicate a portion of new grants awarded through the program to projects that work to provide higher compensation to teachers in STEM fields and other high-need areas. Congress did not comment on the proposal, though it provides level funding of $200 million for the program as requested.

Career and technical education. As part of its response to the recently enacted update to the Perkins Career and Technical Education (CTE) Act, the department proposed to almost triple support for grants focused on improving the quality of CTE education to $20 million, with an emphasis on STEM fields. Congress kept funds for such grants level at $7 million.

Deaf education. Congress provides $5.5 million to continue the National Technical Institute for the Deaf’s regional partnership program, which it states is “intended to expand [the institute’s] geographical reach and improve access to postsecondary STEM education and employment for students who are deaf or hard of hearing in underserved areas.” The institute established a Southeast Regional STEM Center in fiscal year 2016 in partnership with the Alabama Institute for the Deaf and Blind, and Congress expanded funding for the partnership from $2 million to $5.5 million in fiscal year 2019.

Career and technical education. Congress meets NSF’s request to increase the Advanced Technological Education program budget to $75 million, which is $9 million more than it specified last year. The program supports technician training in STEM fields at institutions that grant two-year degrees, which is an area NSF has recently emphasized.

Scholarships and fellowships. The Robert Noyce Teacher Scholarships program is allocated $67 million, a $2.5 million increase over last year. Via Senate report language, NSF is directed to maintain support for the Graduate Research Fellowship Program at its fiscal year 2019 level.

The appropriation for NASA increases the budget for its Office of STEM Engagement by 9% to $120 million. The increase is spread across accounts that fund the Space Grant program, the Minority University Research Education Program, and EPSCoR, a program that works to build research capacity in states that receive a relatively low share of federal research funding.

Separately, Congress specifies that the Science Mission Directorate’s $45 million budget for STEM education activities increase by at least $600,000 this year. Within the Space Technology directorate, the House and Senate both express support for “development and flight of K–12 and collegiate educational payloads,” with the House specifying $5 million for the program. These payloads include CubeSats built by students that are launched on the same rocket as other science and technology payloads.

Department of Energy. The budget for DOE’s primary STEM education account, Workforce Development for Teachers and Scientists, is rising 24% to $28 million. This increase is mostly split between the Science Undergraduate Laboratory Internship Program and the Graduate Student Research Program, which are growing to $13.5 million and $4.5 million, respectively. DOE funds several other workforce development activities through separate accounts and across its national laboratories. Among them, Congress directs that the Computational Sciences Graduate Fellowship program receive not less than $10 million, equal to the amount specified for last year.

Department of Defense. The budget for the National Defense Education Program is increasing 6% to $144 million. The program aims to develop STEM talent through scholarships and fellowships as well as by supporting STEM engagement opportunities at schools where children of military families are enrolled.

National Oceanic and Atmospheric Administration. The budget for NOAA’s Office of Education is increasing by 6% to $30 million, with the new funds distributed across programs supporting minority-serving institutions, environmental literacy, and scholarships. The appropriations legislation also renames the agency’s minority-serving institutions program after Rep. José Serrano (D-NY) in honor of his “steadfast leadership and support for increasing the participation of underrepresented communities in the sciences.” Serrano chairs the appropriations subcommittee for NOAA in the House and is retiring at the end of his current term.