The Trump administration is proposing to cut $1.2 billion from the Department of Energy Office of Science while prioritizing cross-cutting initiatives in areas such as exascale computing, artificial intelligence, and quantum information science.

Funding for the Department of Energy Office of Science would drop 17% to $5.8 billion under President Trump’s budget request for fiscal year 2021. The cuts are distributed across five of the office’s six programs, with the steepest falling on Fusion Energy Sciences and Biological and Environmental Research, echoing the administration’s past proposals. Advanced Scientific Computing and Research would receive a marginal increase.

Beneath the topline cuts, the request proposes increased spending on priority initiatives that cut across programs, particularly in quantum information science (QIS) and artificial intelligence. The request also includes token funding for new construction projects, including the Electron-Ion Collider nuclear science facility and Cosmic Microwave Background Stage 4 experiment. However, it would slow work on most construction projects currently underway, including the flagship neutrino experiment LBNF/DUNE, which has experienced a major increase in its total expected cost.

Given that Congress has increased the office’s budget by 30% since fiscal year 2017 in the face of the administration’s proposals, it is likely to reject the cuts once again this year. For a summary of the request and details regarding previous appropriations cycles, see FYI’s Federal Science Budget Tracker. 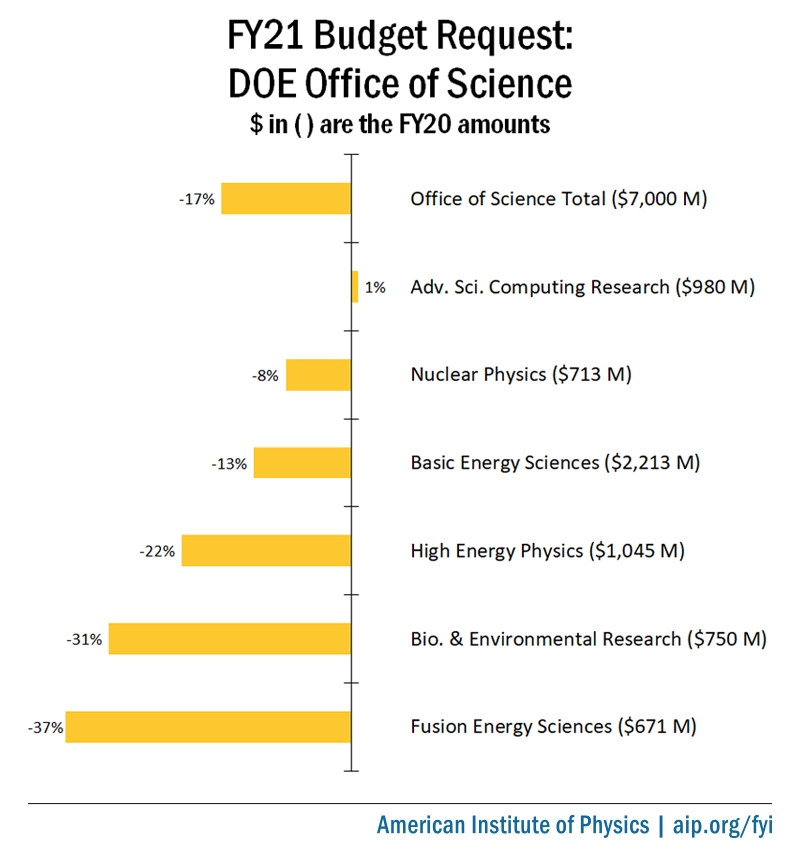 Reflecting the administration’s prioritization of what it has termed “Industries of the Future,” DOE proposes increasing funding for office-wide efforts in QIS and AI.

QIS funding would increase from $195 million to $237 million, drawing from all six programs. In January, DOE began soliciting proposals for the multidisciplinary QIS research centers and plans to select between two and five, which will collectively receive up to $625 million over five years. The National Nuclear Security Administration plans to allocate a further $12 million for QIS.

Funding for artificial intelligence and machine learning would increase from $71 million to $125 million, drawing from all six programs, including for the first time Nuclear Physics. The administration also requests $5 million for the Artificial Intelligence and Technology Office DOE established in September to coordinate AI activities across the entire department. 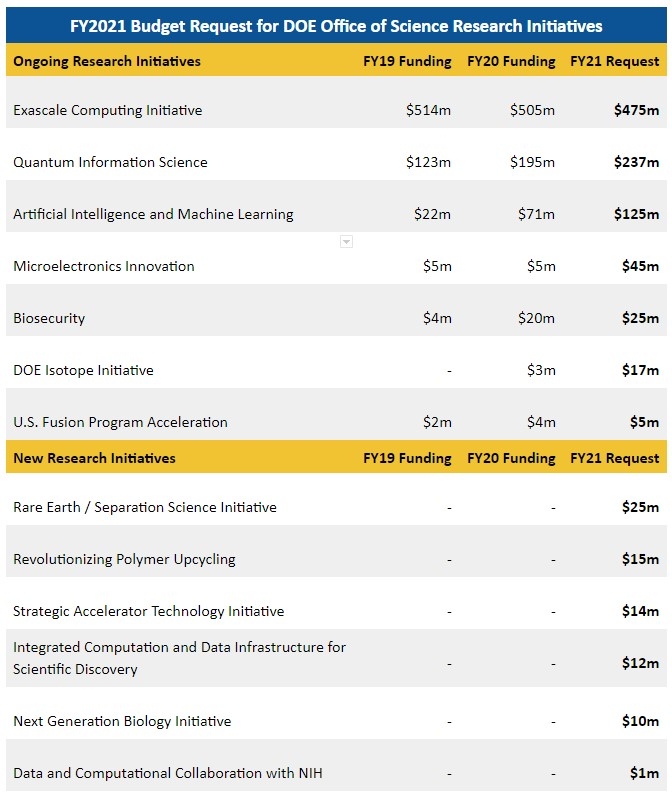 The administration requests $818 million for HEP, a decrease of $227 million.

LBNF/DUNE. DOE reports that the total anticipated cost of the Long-Baseline Neutrino Facility and Deep Underground Neutrino Experiment grew last year from $1.85 billion to $2.6 billion, which is 40% above the top end of the cost range established for the project in 2015. The request attributes the increase to unexpected excavation challenges at the DUNE detector site in South Dakota and lower than expected contributions from international partners. It notes that should the project exceed 50% of the estimate’s top end, DOE rules would require the project to revisit its basic design. The administration proposes to scale back work on the project from $175 million to $102 million in fiscal year 2021, which is about the same amount as last year’s request. 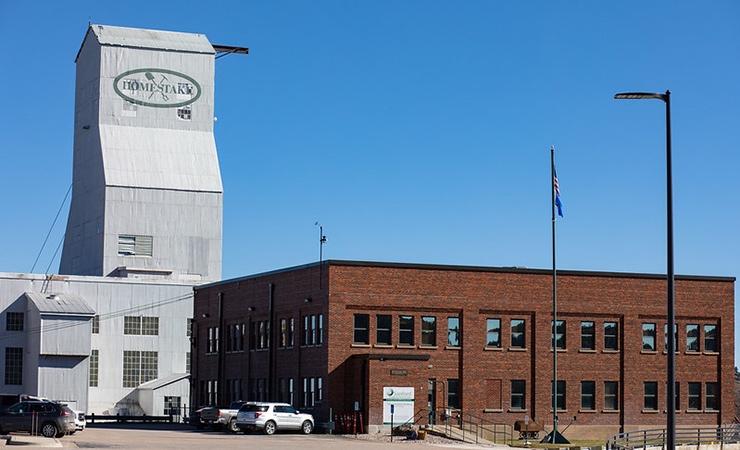 Pre-excavation work has begun at the Sanford Underground Research Facility in South Dakota, the site of a former gold mine, to accommodate the installation of the DUNE detector one mile underground.

PIP-II. The anticipated cost for the Proton Improvement Plan II accelerator upgrade at Fermilab, which will enable LBNF/DUNE, has increased from $721 million to $888 million but is still within the project’s cost range estimate. The administration proposes to reduce its budget from $60 million to $20 million, matching last year’s request.

Large Hadron Collider upgrades. The administration proposes $78 million for the high-luminosity upgrade to the LHC at CERN, a $22 million decrease. The request indicates work will focus on “critical path items to best maintain international schedule synchronization.” In December, CERN announced it will delay by one year the beginning of Long Shutdown 3, when the upgraded equipment will be installed, to the end of 2024.

Accelerator R&D. DOE proposes that HEP contribute over $6 million to a new Strategic Accelerator Technology Initiative, with a matching contribution from Basic Energy Sciences and $1 million from Nuclear Physics. The initiative would bolster work on subjects such as superconducting magnets, ultrafast lasers, and superconducting radio frequency technologies. In addition, this year SLAC National Accelerator Laboratory will prepare for the start of operations at FACET-II. Billed by DOE as the “world’s premier beam-driven plasma wakefield acceleration facility,” it will support both accelerator science and basic research activities. In accord with these developments, the administration proposes to increase the HEP program’s $43 million accelerator R&D budget by $2 million.

Stage 4 Cosmic Microwave Background experiment. The request includes $1 million in initial funding for CMB-S4. DOE will partner with the National Science Foundation on the project, which entails installing telescope arrays at the South Pole and the Atacama Desert in Chile and is expected to cost between $320 million and $395 million.

Funding for BES would be cut 13% to $1.94 billion, reversing the program’s last three years of increases.

Neutron sources. Funding for early work on the Proton Power Upgrade and Second Target Station projects at Oak Ridge National Lab’s Spallation Neutron Source (SNS) would be significantly cut back under the request. SNS is currently operating normally following an unexpected three month shutdown in spring 2019 stemming from a fault in the facility’s target system that exposed four workers to small doses of radiation. Oak Ridge’s other neutron source, the High Flux Isotope Reactor, is also operating normally following an unexpected yearlong shutdown during which the lab and DOE reviewed an incident where a fault in a newly installed fuel element caused a small increase in radioactivity within the reactor. That disruption ultimately led the lab to postpone about 600 experiments.

Light sources. DOE proposes to significantly rein in funding for light source user facility upgrades that are still in their planning stages. However, funding for the Advanced Photon Source Upgrade at Argonne National Lab, which received approval to begin construction last July, would only be pared back from $170 million to $150 million. SLAC’s Linac Coherent Light Source-II (LCLS-II), an x-ray free electron laser facility, is expected to begin operations no later than next year and has already received all the construction funding it requires.

Cryomodule facility. DOE requests $1 million to begin planning a new cryomodule repair and maintenance facility at SLAC. According to DOE, SLAC proposed the facility last year to avoid routinely shipping LCLS-II cryomodules requiring service back to the manufacturing facilities at Fermilab and Jefferson Lab, which may face capacity shortfalls due to future demand for new cryomodules. DOE estimates the new facility would cost about $80 million and could be completed in late 2026. 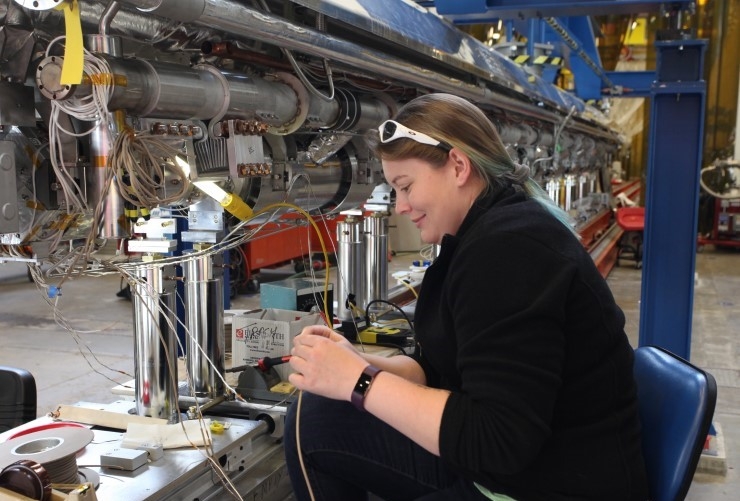 An engineer prepares a cryomodule at Jefferson Lab.

Microelectronics innovation initiative. DOE proposes to increase funding for a multidisciplinary research initiative in microelectronics from $5 million to $45 million, of which $30 million would be from the BES program with the remainder split evenly between Advanced Scientific Computing Research, Fusion Energy Sciences, and High Energy Physics. The initiative responds to opportunities identified through a 2018 Basic Research Needs workshop.

Rare earth element initiative. DOE proposes allocating $25 million from BES to a new initiative focused on rare earth elements and their separation from minerals and recycled materials. Rare earths are classified as critical minerals because they are used in variety of important industrial applications. However, the U.S. currently imports the vast bulk of its supply, primarily from China, motivating efforts to increase domestic supplies and develop substitutes.

Fuels From Sunlight Energy Innovation Hub. DOE is currently preparing to make a five year, $100 million award for a new Fuels for Sunlight Energy Innovation Hub to succeed the hub’s first iteration, the Joint Center for Artificial Photosynthesis at Caltech, which is completing its second and final term. Congress has already provided $20 million for the new hub and DOE is seeking the same amount for continuing funding. DOE indicates it could also opt to select two smaller hubs instead of one large hub.

The administration proposes an 8% cut for NP, bringing its budget to $653 million.

Electron-Ion Collider. Following Congress’ initial appropriation of $11 million for the Electron-Ion Collider this year, the administration requests $2.5 million to continue early work. DOE estimates the project will cost between $1.6 billion and $2.6 billion in total and notes the upper bound was reduced from $4.2 billion after the department settled on Brookhaven National Lab’s proposal to build the facility.

Neutrino-less Double Beta Decay experiment. The administration requests $1.4 million to continue early work on a large-scale experiment that would determine whether the neutrino is its own antiparticle. Congress provided an initial appropriation this year to begin the project, which is expected to cost between $215 million and $250 million in total.

Isotope program. The administration proposes increasing support for the DOE Isotope Program by $16.5 million to $66 million. The request includes increased support from $3 million to $16.5 million for the DOE Isotope Initiative, which aims to “enhance core competencies in the development and operation of a broad array of isotope enrichment technologies.”

The administration requests $425 million for FES, a 37% decrease that would roll back the growth Congress has provided over the last three budget cycles.

ITER. While Congress has been steadily increasing its support for the multinational ITER fusion energy project, providing it with $242 million this year, the administration proposes $107 million for fiscal year 2021 that would be limited to in-kind contributions of equipment. A bill recently introduced by Republicans on the House Science Committee identifies $290 million as an appropriate funding level, with further increases in subsequent years.

Princeton Plasma Physics Lab. The administration proposes cutting funding for the NSTX-U facility at PPPL from $98 million to $71 million, echoing last year’s request. NSTX-U broke down in 2016, shortly after the completion of a major upgrade project, and DOE now anticipates it will resume operations in May 2021.

Materials Plasma Exposure Experiment. DOE reports that the anticipated total cost range for MPEX, a facility at Oak Ridge that would test materials under conditions similar to those in a fusion reactor, has increased from between $40 million and $60 million to between $86 million and $175 million. The administration proposes $12 million for early work on the facility, a $9 million decrease.

Materials in Extreme Conditions Petawatt Upgrade. The administration proposes $5 million for an upgrade to SLAC’s MEC laser, a $10 million decrease. The request indicates the upgraded facility would be located within a new experimental hall at LCLS-II and reach a peak power level of at least between 1 and 10 petawatts.

Exascale computing. The program-wide budget for the Office of Science Exascale Computing Project is set to decrease by $20 million to $169 million. DOE anticipates completing at least one exascale computing system in calendar year 2021. Through separate accounts, DOE requests funds for site preparation activities at Oak Ridge National Laboratory and Argonne National Laboratory, which will host the computers.

Research program. Of the $264 million proposed for research, much of the additional funding would go toward ASCR’s contributions to the QIS and AI initiatives. The Research and Evaluation Prototypes account, which supports activities such as R&D on quantum testbeds and emulators, has been transferred from ASCR’s facilities budget to its research program. Its funding would increase from $39 million to $66 million under the request. The request also includes initial funds to support early-stage planning for a “quantum internet.”

NIH initiative. The request for ASCR also includes $1 million to support a new partnership with the National Institutes of Health “to expand the capabilities of DOE’s tools and address NIH’s rapidly growing data and computational challenges.”

Funding for BER would decrease 31% to $517 million, repeating the administration’s previous proposals to significantly scale back the program.

Biological Systems Science. Support for BER’s biological programs would decrease from $404 million to $339 million, including a $17 million cut to the Joint Genome Institute budget. Meanwhile, funding for DOE’s biosecurity research initiative would increase by $5 million to $25 million.

Earth and Environmental Systems Sciences. Overall funding for Earth science would decrease from $345 million to $178 million. The Environmental Molecular Sciences Laboratory would receive almost-level funding of $44 million, while the Atmospheric Radiation Measurement Research Facility would be cut $16 million to $55 million.