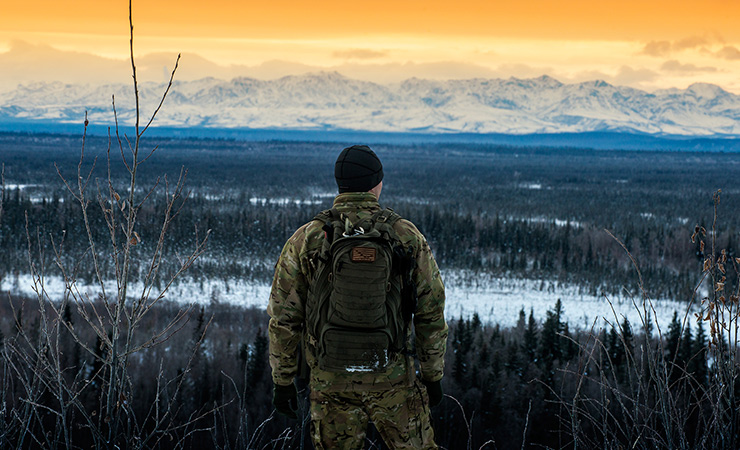 An Air Force Arctic Survival School instructor at Eielson Air Force Base near Fairbanks, Alaska. Climatic change is making northern latitudes into an increasingly important military domain, as outlined in the Arctic Strategy the Department of the Air Force released this summer.

This fall, a conference committee will convene to reconcile the respective versions of the annual National Defense Authorization Act (NDAA) that the House and Senate passed in July. Leaders on the Armed Services Committees who are shepherding the legislation have recently said they expect it will be finalized sometime after the November election.

As lawmakers hammer out the NDAA’s final form, they will consider a number of provisions addressing national security risks stemming from climate change and other dangerous environmental conditions, expanding on a focus in last year’s bill. They will also continue prior efforts to craft initiatives aimed at bolstering and diversifying the defense STEM workforce and improving the defense laboratories’ ability to collaborate with researchers in academia and the private sector.

Throughout this bulletin, numbers in brackets refer to corresponding bill sections and pages from the committee reports accompanying the bills. Previous bulletins reviewed other provisions that aim to broadly strengthen the “national security innovation base,” foster the U.S. military’s access to important commercial technologies, and set policy for advanced military technologies and the U.S. nuclear weapons complex.

Climate security roundtable. The House proposes establishing a National Academies Climate Security Roundtable comprising senior federal officials and researchers as well as stakeholders from the broader research community. The group would provide the Climate Security Advisory Council established through last year’s NDAA with guidance on matters such as how best to exchange relevant data and expertise within the intelligence community and across government. [Sec. 1613]

Climate change roadmap. The House proposes directing DOD to update its 2014 Climate Change Adaptation Roadmap, specifying the new roadmap should address various environmental changes and their implications for equipment, logistics, troop health, global conflicts, and demand for humanitarian relief, among other matters. The roadmap would also enumerate the 10 “most concerning existing or emerging conflicts or threats that pose a risk to the security of the United States that may be exacerbated by climate change.” [Sec. 322]

Extreme weather and permafrost thaw. The Senate would require DOD to update its 2019 report on climate-related vulnerabilities, assessing “extreme weather” impacts on various military activities and explaining the methodology employed, including use of the “climate vulnerability and risk assessment tool” called for in last year’s NDAA. [Sec. 354] A separate provision calls for a report on the impacts of permafrost thaw on DOD infrastructure and operations. [Sec. 351]

Arctic R&D and planning. Pending a DOD decision to expand activities in the Arctic, the Senate proposes establishing an R&D program to address the military’s operational requirements there. The program would focus on relevant weapons, equipment, and infrastructure, as well as on capabilities for monitoring, assessing, and predicting weather and other environmental conditions. [Sec. 1045] A separate provision would require DOD to plan and potentially establish a “regional center for security studies for the Arctic,” to be named after Ted Stevens, who served as a senator for Alaska from 1968 to 2009. [Sec. 1208]

Cloud-aerosol research. The House report expresses interest in “basic research opportunities in cloud-aerosol effects and atmospheric sunlight reflection,” citing applications in weather and climate prediction. It also notes the potential of such research to expand the “portfolio of options for reducing risks to military infrastructure, operations, and readiness.” It therefore directs the Office of Naval Research to report on how it can support work in the area. [p. 45]

Carbon capture and utilization. The Senate is repeating its proposal from last year to incorporate the Utilizing Significant Emissions with Innovative Technologies (USE IT) Act, which would require the Environmental Protection Agency to support R&D on the utilization of captured carbon dioxide and direct air capture methods. A bipartisan coalition of lawmakers from both the Senate and House is lobbying for its inclusion, but the White House opposes the provision on the grounds that EPA would be duplicating work already undertaken by the Department of Energy.

Ocean research. A House provision would revamp the National Oceanographic Partnership Program, a Navy-administered initiative that facilitates ocean research and education partnerships between federal agencies, industry, and academia. In particular, it would allow the program to issue grants from a fund that channels contributions from federal, state, and local agencies, and private sources. The provision would also formally replace the interagency National Ocean Research Leadership Council in statute with the Ocean Policy Committee that was created by executive order in 2018. In addition, it would direct the National Oceanic and Atmospheric Administration to provide administrative and technical support for the Ocean Research Advisory Panel, which advises the committee. [Sec. 1744]

Graduate traineeships. The House proposes creating a program called Traineeships for American Leaders to Excel in National Technology and Science (TALENTS), through which DOD would partner with at least 10 educational institutions to provide graduate student traineeships and internships in priority R&D areas. DOD would provide grants to students for up to four years to cover tuition and program participation costs, totaling up to $1 million annually per institution. Preference for partnerships would be based on a variety of factors, such as institutions’ proposals to include in the program students who are underrepresented in STEM fields. [Sec. 279]

Scholarships for service. The House proposes establishing a five year initiative within DOD’s Science, Mathematics, And Research for Transformation (SMART) scholarship program to provide financial assistance to students pursuing associate’s, bachelor’s, or advanced degrees at institutions where most students are from ethnic groups underrepresented in STEM fields. Called the National Security Pipeline Pilot Program, the scholarships would also provide summer internship opportunities with a defense industry partner. Per SMART program rules, participants would be obligated to a term of employment within DOD or the defense industry. The same provision would require that DOD award at least 20% of all SMART program scholarships to students in computer science or a related field. [Sec. 211]

Contractor support for STEM. The House proposes creating a DOD program that would help defense contractors establish strategic partnerships with universities to “build and strengthen communities involved in STEM disciplines.” Contractors would also help improve STEM education programs at the K–12 level and at minority-serving institutions, and develop pathways for historically underserved and underrepresented communities to enter STEM careers. Activities conducted through the program would be counted as allowable costs on government contracts. [Sec. 212]

STARBASE. The House proposes broadening the mission of DOD’s STARBASE youth outreach program beyond “science, mathematics, and technology” to include “engineering” and “art and design.” The House and Senate both propose expanding the program’s reach to include the Northern Mariana Islands and American Samoa. [House Secs. 591 and 592; Senate Sec. 548]

NNSA contractor diversity. Noting that the National Nuclear Security Administration is now hiring thousands of new employees at its laboratories, plants, and sites, the House proposes that the agency produce an annual public report that analyzes the demographics of its contractor workforce and explains its plans to increase diversity. [Sec. 3118]

Foreign student travel. The House bill includes a provision that would ensure for the duration of the COVID-19 emergency that foreign students enrolled at American universities can retain their visa status even if their courses are moved online. [Sec. 1763] The provision responds to the U.S. Immigration and Customs Enforcement’s abortive move this summer that would have required foreign students in this situation to leave the country and take classes from abroad.

Enhanced pay rates. The Senate proposes making permanent pilot programs that authorize pay of up to 150% of ordinary rates in order to attract “high-quality” experts to oversee “complex, high-cost technological acquisition efforts.” The authority could be used for up to 20 term-limited positions in DOD and the military departments and up to 15 such positions in defense laboratories. Another provision would extend to the end of fiscal year 2021 an authorization for National Nuclear Security Administration to set special pay rates for up to 200 scientific, engineering, or technical positions. [Secs. 1101, 1102, and 3125]

Temporary employment of academics. The House proposes establishing a program allowing university professors and their students to be employed within DOD’s science and technology enterprise on a part-time or term basis to work on research projects. The program would initially accept at least 10 professors, at least five of whom work in artificial intelligence or machine learning. [Sec. 246]

Disclosure of DOD funding. The Senate proposes requiring recipients of DOD R&D grants to declare the amount of such funding in any “statement, press release, or other document describing the program, project, or activity funded through such grant funds, other than a communication containing not more than 280 characters.” [Sec. 220]

Researchers at military schools. The House proposes allowing faculty at military educational institutions to accept research grants from individuals and entities outside DOD. [Sec. 560I]

Public–private talent exchange. A House provision would modify existing DOD talent exchange programs to expand the participation of experts in artificial intelligence and to update protections against abuses related to financial conflicts of interest. [Sec. 249]

Barriers to innovation. The Senate report directs DOD to consider the feasibility of recommendations in a recent congressionally mandated report on “barriers to innovation” within the defense research enterprise, in particular those relating to special administrative authorities and flexibilities. It also directs the department to survey defense laboratories and other research entities to identify further changes needed to promote innovation. [p. 138]

Small business contracts. The Senate proposes extending by three years a pilot program created through the fiscal year 2016 NDAA that streamlines procedures for awarding small businesses contracts of up to $7.5 million for technology development projects. [Sec. 872]

R&D cost-sharing with foreign entities. The House proposes exempting cooperative R&D agreements with partners in allied foreign countries from a requirement that costs be shared equally, provided the department attests the agreement “provides strategic value to the United States or another participant in the project.” [Sec. 213]