Amid political efforts to implicate the Wuhan Institute of Virology in the COVID-19 pandemic, NIH has terminated a grant for coronavirus research that funded collaborative work with the institute. Separately, scientific societies have condemned attempts to ascribe blame for the pandemic, warning of the rising threat of racist attacks on people of Asian background. 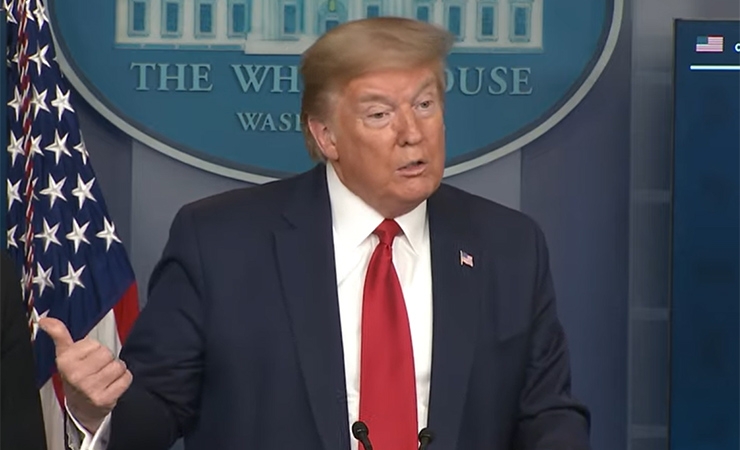 At a media briefing on April 17, President Trump said he would terminate a grant that supports collaborative research activities with the Wuhan Institute of Virology. The National Institutes of Health carried out the termination a week later.

On April 24, the National Institutes of Health terminated a grant for a research project on bat-borne coronaviruses after it was criticized by President Trump and a number of Republican lawmakers. While the grant was held by EcoHealth Alliance, a global environmental health research organization based in New York, it attracted negative attention because part of it supported collaborative activities with the Wuhan Institute of Virology (WIV) in China.

WIV houses a lab equipped to study the most dangerous class of pathogens, and a number of pundits and politicians are now suggesting it accidentally released SARS-CoV-2, the virus that causes COVID-19. Though thinly supported, the idea is fueling efforts to focus blame for the COVID-19 pandemic on the Chinese government. Sen. Tom Cotton (R-AR), in particular, has cited suspicions about WIV and the actions of Chinese leaders during the pandemic as justifying a hardline stance, which he said this week could include cutting off student visas in technical fields.

Meanwhile, many scientific societies have become concerned that rising hostility to China is motivating attacks on people with Asian ethnic backgrounds. On April 20, a group of 50 societies, including AIP, endorsed congressional resolutions introduced by Democratic lawmakers that condemn anti-Asian sentiment related to the pandemic.

While Cotton began speculating about WIV’s connection to the pandemic as early as February, interest in the matter has grown following an April 14 article by Washington Post columnist Josh Rogin, who reported that a visiting U.S. delegation warned about safety issues at the institute in 2018.

Cotton has cited that report, alongside recent Chinese government actions, as “circumstantial” but convincing evidence the pandemic originated at WIV or a neighboring lab run by the Wuhan Center for Disease Control and Prevention. For its part, WIV has denied it is the source of SARS-CoV-2. Disease researchers further maintain it is unlikely the virus was uncovered prior to its spread and state it is far likelier animals passed it to humans in an uncontrolled environment.

Meanwhile, in mid-April, Rep. Matt Gaetz (R-FL) began drawing attention to EcoHealth Alliance’s grant after it was reported on in the British tabloid press. Asked about the grant at a media briefing on April 17, Trump replied,

I’ve been hearing about that. And we’ve instructed that if any grants are going to that area — we’re looking at it, literally, about an hour ago, and also early in the morning. We will end that grant very quickly.

In a letter obtained by Breitbart News, on April 19 NIH Deputy Director for Extramural Research Mike Lauer directed EcoHealth Alliance to stop all payments to WIV. Lauer stated the agency had suspended WIV’s eligibility to participate in federal programs pending a review of “allegations” about the release of SARS-CoV-2 from its lab. Lauer indicated at that time the action would not affect the remainder of the grant.

According to Politico, which first reported on the grant termination, Lauer asked EcoHealth Alliance for more information on April 20, writing, “We need to know all sites in China that have been in any way linked to this award.” He added that “it would be helpful for us to know about all China-based participants in this work,” dating back to the project’s start in 2014.

On April 21, a group of 54 Republican lawmakers led by Gaetz and Sen. Martha McSally (R-AZ) called for assurance from congressional leaders that no pandemic response funding would go to WIV, citing the EcoHealth Alliance grant. “We’re sure you agree that taxpayers’ money should not be sent to a dangerous Chinese state-run bio-agent laboratory that lacks any meaningful oversight from U.S. authorities,” they wrote.

NIH terminated EcoHealth Alliance’s grant three days later. According to Politico, Lauer stated in a letter, “At this time, NIH does not believe that the current project outcomes align with the program goals and agency priorities.”

NIH awarded about $3.4 million in total to EcoHealth Alliance via the grant in fiscal years 2014 through 2019, and the agency has asked it not to spend funds awarded for fiscal year 2020. It is unclear what specifically prompted NIH to reverse its assurance about the grant’s continuation but the agency appears not to have alleged any wrongdoing.

Cotton’s accusation that the Chinese government concealed WIV’s role in the pandemic is part of a broader campaign he is waging to attribute the spread of COVID-19 in the U.S. to duplicity by China’s leaders. In an April 26 interview, he charged that, once the Chinese government failed to contain SARS-CoV-2, it deliberately allowed the virus to escape its borders and refused to cooperate with efforts to stop it so as to ensure that other countries also suffered economic damage.

Describing various actions he thinks the U.S. should take against China, Cotton pointed to longstanding grievances about intellectual property theft to suggest that Congress consider cutting off visas for Chinese students seeking to study science and engineering, especially at the post-graduate level. “If Chinese students want to come here and study Shakespeare and the Federalist Papers, that’s what they need to learn from America. They don’t need to learn quantum computing and artificial intelligence from America,” he remarked.

Cotton has previously advanced narrower proposals to restrict visas for Chinese nationals. Last May, he introduced the PLA Visa Security Act, which would generally bar individuals funded or sponsored by institutions that the White House states are affiliated with the Chinese military from obtaining student and visitor-exchange visas. It would also require U.S. consular offices to conduct additional security reviews of Chinese citizens applying for visas to attend graduate school in certain subjects.

The Trump administration is likewise seeking to focus blame on China for the pandemic. Trump himself sought for a time to label SARS-CoV-2 the “Chinese virus,” and this week he suggested the U.S. may seek financial reparations from China.

Today, the Washington Post reported that senior administration officials and some members of Congress are exploring a range of retaliatory measures against China and are pushing U.S. intelligence agencies to explore the Wuhan lab allegations. The Office of the Director of National Intelligence released a statement today indicating it would continue to investigate the pandemic’s origins, including the possibility it originated at WIV.

Meanwhile, the Department of Health and Human Services, which oversees NIH and other public health agencies, has appointed Michael Caputo as its new assistant secretary for public affairs, a political operative who recently made racist comments about China.

CNN reported last week that Caputo had erased over 1,000 tweets dating from before he joined the department on April 14, including a number with racist content. On March 12, for instance, he dismissed a conspiracy theory that SARS-CoV-2 originated in a U.S. lab by sarcastically stating, “Sure, millions of Chinese suck the blood out of rabid bats as an appetizer and eat the ass out of anteaters but some foreigner snuck in a bottle of the good stuff.”

Asked for comment by CNN, Caputo expressed indifference to its reporting, saying, “Fair game, dude. I don’t care. It doesn’t matter to me at all.”

Without mentioning specific events, the April 20 multi-society letter endorsing the anti-discrimination resolutions declares that the signatories reject “efforts to ascribe fault for the pandemic.” Warning against the threat of growing racism, it states,

Our societies have been concerned by news reports that individuals of Asian ancestry are increasingly subject to stigma, physical attack, or suspicion due to the potential origins of the novel coronavirus SARS-CoV-2. These actions are wrong and unacceptable for their racial overtones, their impact on societies and individuals, and run counter to the core values of the scientific community and the members we represent.

The resolutions themselves condemn “all manifestations of expressions of racism, xenophobia, discrimination, anti-Asian sentiment, scapegoating, and ethnic or religious intolerance.” They also call on federal law enforcement officials to track and take action against hate crimes and threats directed against the Asian American community.

Introducing the resolutions in late March and early April, Rep. Grace Meng (D-NY) and Sens. Kamala Harris (D-CA), Tammy Duckworth (D-IL), and Mazie Hirono (D-HI) called out language used by Trump and others, including terms such as “Chinese virus,” “Wuhan virus,” and “Kung-flu,” as “irresponsible, reckless, and downright disgusting.” To date, neither the House nor Senate has considered the resolutions during the short periods the chambers have been in session.

Even before the pandemic, there was substantial concern within the scientific community about discrimination toward Chinese and Chinese American individuals arising from federal efforts to combat exploitation of U.S. research by the Chinese government. In particular, investigations by the FBI and agencies such as NIH to uncover surreptitious connections to China have led to a wave of firings and arrests.

While the agencies insist they are targeting specific illegal or unethical behaviors, their activities have nonetheless spurred anxieties among researchers with ties to China that they will be subjected to spurious accusations and unfair treatment. The new political environment of the pandemic may compound such fears.