President Biden has selected geneticist Eric Lander to be his science advisor and elevated the position to Cabinet rank. Sociologist Alondra Nelson will occupy a new White House job focused on “science and society,” and Caltech’s Frances Arnold and MIT’s Maria Zuber will chair the President’s Council of Advisors on Science and Technology. 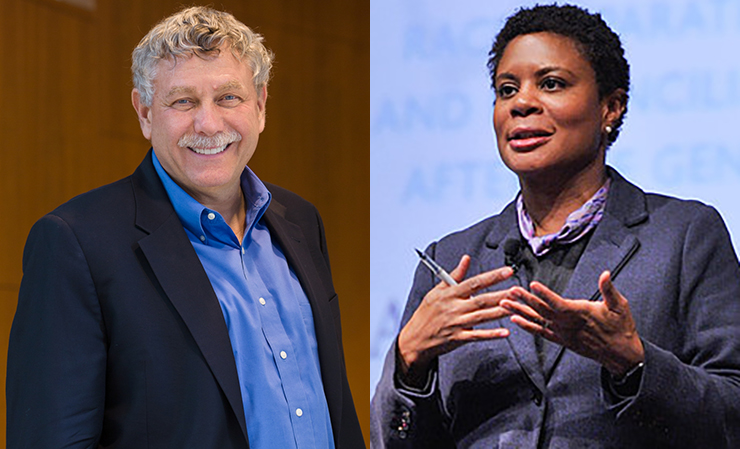 On Jan. 15, President-elect Biden announced his selections for senior science policy leadership positions within his administration and introduced them at an event the next day. Geneticist Eric Lander will be the presidential science advisor and is nominated to serve as director of the White House Office of Science and Technology Policy. An entirely new role, OSTP deputy director for science and society, will be filled by sociologist Alondra Nelson.

Biden also announced that the science advisor position will have a seat in his Cabinet, a move that is unprecedented in the history of White House science policy. In a letter appointing Lander to the job, Biden invoked the recent 75th anniversary of Science — The Endless Frontier, a landmark report that World War II science administrator Vannevar Bush wrote at the direction of President Franklin Roosevelt. Suggesting another such pivot point has arrived, Biden wrote, “I believe it is essential that we refresh and reinvigorate our national science and technology strategy to set us on a strong course for the next 75 years, so that our children and grandchildren may inhabit a healthier, safer, more just, peaceful, and prosperous world.”

Also introduced last week were the new co-chairs of the President’s Council of Advisors on Science and Technology, Caltech bioengineer Frances Arnold and MIT geophysicist and vice president for research Maria Zuber. As a group of outside experts responsible to the president, PCAST is newly reconstituted with each presidential administration and its full membership will be announced at a later date. In addition, Biden announced he has chosen to keep Francis Collins on as director of the National Institutes of Health, a position he has held since President Obama appointed him in 2009.

Widely known as a prodigious intellect, Eric Lander trained as a mathematician, earning his bachelor’s degree in 1978 from Princeton University and finishing first in his class. He then attended Oxford University as a Rhodes Scholar, earning his doctorate from there in 1981, and began his career as a professor of managerial economics at Harvard Business School. Soon, though, he turned his attention to molecular biology, and in 1986 he took on an additional position at MIT’s Whitehead Institute for Biological Research. He won a prestigious MacArthur Foundation fellowship in 1987 at the age of 30 for his early work in the field.

At the Whitehead Institute, Lander quickly became involved in the nascent Human Genome Project, which entailed data processing challenges suited to his mathematical background. The project also demanded the construction of a large-scale research enterprise that was unusual in biology and ultimately received nearly $4 billion in funding from NIH and the Department of Energy. Taking the lead on a major component of the project, Lander founded the Whitehead/MIT Center for Genome Research in 1990 and gained a reputation as a forceful leader as the competition grew increasingly fierce between different genome research efforts. In 2000, President Bill Clinton and British Prime Minister Tony Blair declared the genome race finished at a White House event that also brokered a resolution between the competing factions.

In 2003, Lander founded a new genomics research institute co-sited at MIT and Harvard University that was funded by and named after philanthropists Eli and Edythe Broad. Lander’s objective in establishing the Broad Institute was to preserve the collaborative framework built up around the Human Genome Project and to undertake new research that cutting-edge methods in genomics enabled. He has remained its head since then until taking leave when he was named to his new White House position.

Under Lander’s leadership, the Broad Institute has employed thousands of scientists engaged in interdisciplinary research aimed at improving human health. While publishing large, open data sets, the institute also works to patent and commercialize genomic innovations, and, notably, has been a party in a long-running patent dispute over the CRISPR gene-editing technique. Lander sparked a controversy over that episode in 2016 when he published a historical essay on CRISPR that foregrounded the role of institute scientist Feng Zhang while downplaying the work of competitors Jennifer Doudna and Emmanuelle Charpentier.

For the duration of the Obama administration, Lander also served part-time as PCAST co-chair. Among the 36 reports PCAST published during that period, Lander led studies that identified ways to combat antibiotic resistant bacteria and that critiqued forensic science methods and their use in courtrooms, a subject he has often spoken out about. At the last meeting of Obama’s PCAST in 2017, Lander also highlighted the council’s study on regulatory barriers to innovation in hearing aid technology as a particularly influential contribution. All these subjects could be ripe for revisiting, as the pandemic has foregrounded threats to public health, the Trump administration’s Justice Department has freshly criticized PCAST's forensic science study, and the Food and Drug Administration’s review of hearing aid regulations has stalled.

Lander has remained engaged with science policy issues under the Trump administration. He has been the co-chair of a National Academies panel with the broad charge of examining the challenges the U.S. faces in maintaining a global leadership position in research and development, and this year he hosted a seven-part podcast series on pressing societal questions related to science and technology. He has also been affiliated with efforts involving Obama administration officials that recommend ways to respond to the COVID-19 pandemic and sketch out science and technology policy opportunities for the new administration.

Although some presidents have invited their science advisors to Cabinet meetings, the elevation of the role to Cabinet status affords a literal seat at the table. Biden had been considering taking the step since at least last April, and Clinton’s science advisor Neal Lane advocated for it last fall, arguing it would ensure the advisor has a voice in Cabinet meetings as well as “signify the importance of the role to federal agencies, to Congress, and to the public.”

Congratulating Lander, President Trump’s OSTP Director Kelvin Droegemeier also endorsed putting the science advisor in the Cabinet, calling it an “excellent move.” Notably, Droegemeier did not hold the additional title of “assistant to the president for science and technology,” which confers direct access to the president.

While Lander now holds a higher position than any previous science advisor, how his role will interact with other science-related roles in the White House remains an outstanding question. For instance, Biden has also designated Anthony Fauci, director of the National Institute of Allergy and Infectious Diseases, as his “chief medical adviser,” and former FDA Commissioner David Kessler as the “chief science officer” for his pandemic response. In addition, his two top climate advisors, Gina McCarthy and John Kerry, will have their own dedicated staffs.

As with the elevation of the science advisor role, the creation of Alondra Nelson’s position is likewise unprecedented and reflects the priority Biden and Vice President Kamala Harris are placing on matters of social and economic equity.

An expert on the intersections of genetics, race, and health, Nelson earned a doctorate in American studies from New York University in 2003 and held faculty positions at Yale University and at Columbia University, where she was also the university’s first dean of social science. In 2017, Nelson was named president of the Social Science Research Council, a nonprofit organization, and in 2019 she moved her academic base from Columbia to the Institute for Advanced Study in Princeton, New Jersey. She has published a book on the Black Panther Party’s role in health care activism, and another that explores the prospects of using genetic genealogy as a tool for racial reconciliation. She has been working on a third book on Obama’s Precision Medicine Initiative and the strategy OSTP took under his administration.

Accepting her appointment on Jan. 16, she emphasized that science is a “social phenomenon,” remarking, “It’s a reflection of people, our relationships, and our institutions. When we provide inputs to the algorithm, when we program the device, when we design, test, and research, we are making human choices — choices that bring our social world to bear in a powerful new way. It matters who makes those choices, it matters who they’re thinking about when they do.”

The administration has not yet elaborated on whether her position will rank above OSTP’s yet-to-be-named associate directors, who require Senate confirmation, or if it will report to one of them. OSTP’s founding statute permits the president to appoint up to four associate directors, who during the Obama administration were given leadership of teams dedicated respectively to science, technology and innovation, energy and environment, and national security and international affairs. Notably, Tom Kalil, who had a leading role in Obama’s OSTP, held the non-Senate-confirmed job of deputy director for technology and innovation and ostensibly reported to an associate director position that remained vacant.

Arnold and Zuber take up reins of PCAST

Frances Arnold and Maria Zuber will be the first women to lead PCAST, which was established in its current form by President George H. W. Bush but has precursors stretching back to the Eisenhower administration.

Arnold earned a doctorate in chemical engineering from the University of California, Berkeley, in 1985, and joined the faculty at Caltech the following year, where she remains to the present day. Her research is focused on the interfaces of biology and chemistry, and in 2018 she won the Nobel Prize in Chemistry for her work on the directed evolution of enzymes. She has also founded three biotechnology companies in sustainable chemistry and agriculture and sits on the boards of directors of Illumina, a genetic sequencing company, and Google parent company Alphabet. She was the first woman to be elected a member of all three of the National Academies of Sciences, Engineering, and Medicine.

Zuber earned her doctorate in geophysics from Brown University in 1986, and began her career at NASA’s Goddard Space Flight Center as a planetary geophysicist. She was the first woman to lead a robotic planetary science mission for NASA and has held leadership roles on nine NASA missions since 1990. She has been on the faculty at MIT since 1995 and has served as the institute’s vice president for research since 2013. Since 2012, she has also been a member of the National Science Board, which oversees the National Science Foundation, and was its chair from 2016 to 2018. She is also currently co-chair of a congressionally chartered science and security roundtable the National Academies established last year.

Zuber has taken an active interest in environmental research, working to expand MIT’s footprint in Earth systems research and co-leading development of its climate action plan. Accepting her appointment to PCAST, she noted that her grandfathers’ work as coal miners in Pennsylvania, where she grew up, has influenced her views on policy.  “I could not be more excited for the efforts of this administration to deploy science to help breathe new life into those places and into so many communities, large and small, that are hurting today,” she remarked.