Congress’ fiscal year 2021 appropriation for NASA funds all major science missions under development but does not provide the budget the Trump administration had requested to advance its aggressive schedule for a crewed lunar landing.

Under its fiscal year 2021 appropriation, NASA’s budget is increasing 3% to $23.3 billion, with most of the additional funding allocated to its human exploration directorate. However, the increase falls short of the $25.2 billion the Trump administration had requested to support its goal of landing astronauts on the Moon in 2024.

The budget for NASA’s science directorate is increasing 1% to $7.22 billion. This figure excludes the $79 million budget of the Biological and Physical Sciences Division, which was transferred to the science directorate from the human exploration directorate last year. All major science missions will have funding needed to move ahead on schedule. In addition, Congress has given the Europa Clipper mission leeway to launch on a rocket other than the in-development Space Launch System, a move that NASA estimates will save more than $1.5 billion.

An explanatory statement accompanying Congress’ appropriations legislation provides funding and policy direction, and language from the House Appropriations Committee report conveys additional direction unless specifically negated in the final statement. The Senate Appropriations Committee did not formally submit its report, but language from a publicly released draft is incorporated in the explanatory statement. For summary tables, consult the FYI Federal Science Budget Tracker. 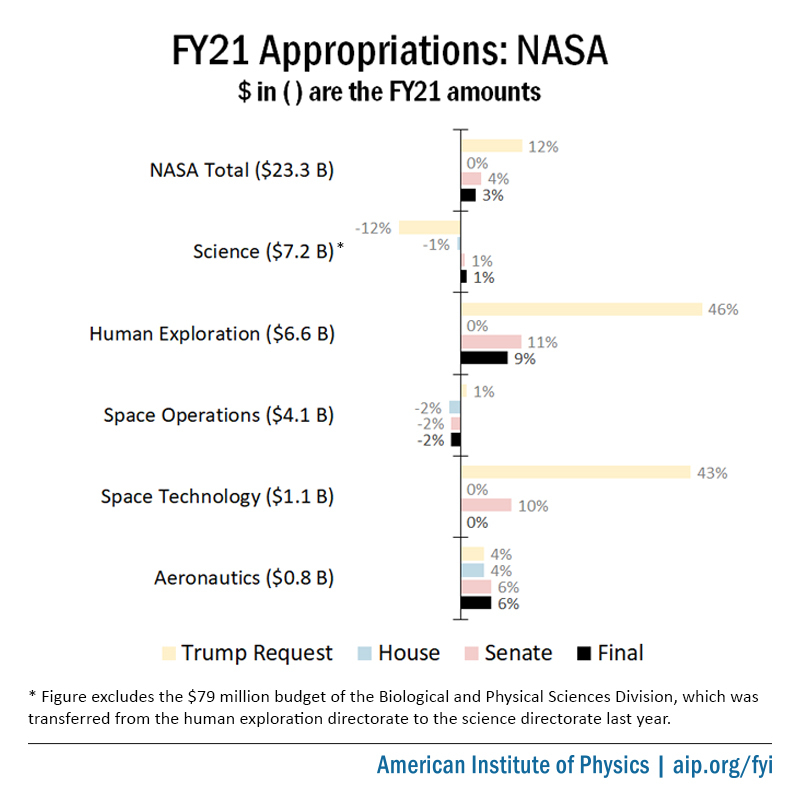 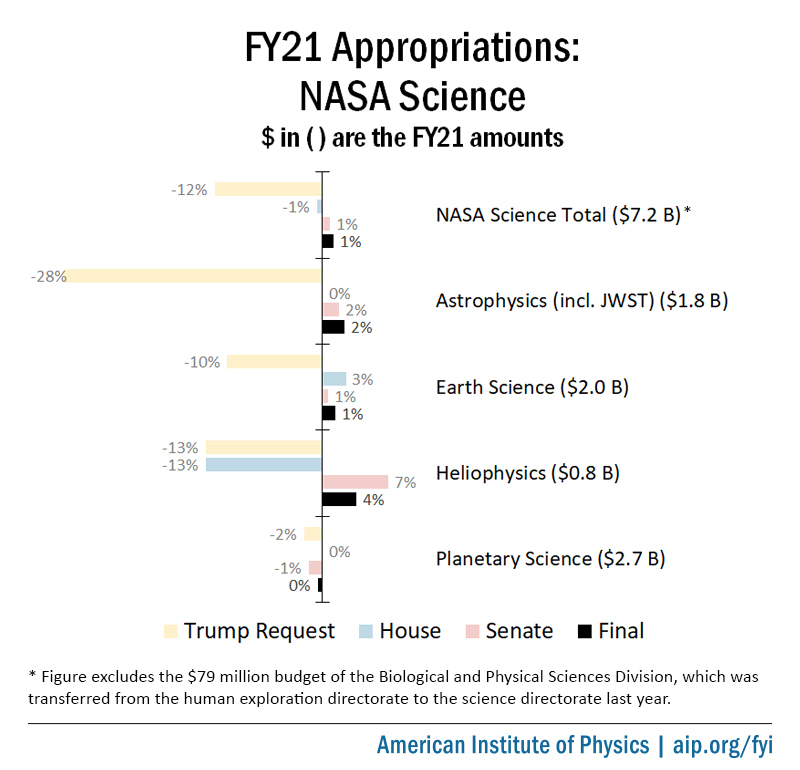 Artemis. Congress is providing $850 million for work on the three human landing system projects that NASA is currently supporting, well short of the requested $3.37 billion. The landing system is the least-developed component of the initial phase of Artemis, NASA’s lunar exploration program. The Biden administration has already delayed the award of follow-on contracts, but last week the White House affirmed that Artemis will continue. As the program moves ahead, NASA will develop a new schedule and potentially a new mission architecture for it, which could include changes such as building out the planned Moon-orbiting Gateway outpost before proceeding with a crewed mission to the lunar surface.

Gateway. Congress is providing $699 million for the Gateway, which the European Space Agency, Canadian Space Agency, and Japanese Aerospace Exploration Agency have all recently agreed to partner on. Last March, NASA selected the first science instruments to be installed aboard the Gateway and this week it awarded launch contracts for its first two elements, with a target launch date in 2024.

Lunar science. Within NASA’s planetary science program, the budget for lunar science is increasing from $300 million to up to $452 million, meeting the agency’s request. The first two U.S. robotic lander missions since the Apollo era are scheduled for launch later this year, with several other missions already in the pipeline through 2023, including the VIPER rover mission. 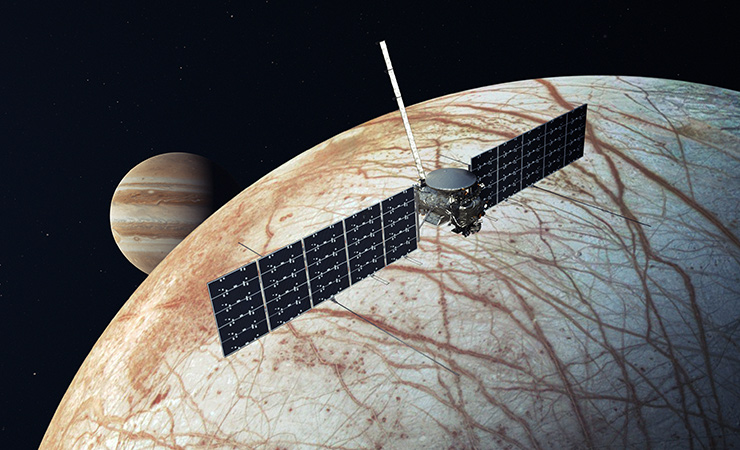 NASA has elected to launch its Europa Clipper mission using a commercial rocket after Congress relented on a previous requirement that it use the in-development Space Launch System. The agency expects the switch will save in the range of $1.5 billion.

Europa Clipper. NASA’s flagship mission to perform dozens of fly-bys of Jupiter’s icy moon Europa is fully funded at $404 million. Congress also revises its requirement that the mission use the Space Launch System, stating that it shall use the rocket if it is “available” and if “torsional loading analysis has confirmed Clipper’s appropriateness for SLS.” If those conditions are not met, NASA is directed to conduct an open competition for a launch vehicle. The agency has now invoked that option and asked companies to submit information on heavy-lift rockets that will be available for launch in October 2024 and capable of achieving a trajectory that will deliver the spacecraft to the Jupiter system in 2030.

Future SLS-launched missions. Congress directs NASA to provide it with a “comprehensive manifest of Space Launch System cargo flights through 2030 which incorporates planned science missions, such as the Europa Lander mission and outer planet missions to Uranus and Neptune.” NASA currently has no firm plans to follow up the Europa Clipper with a lander mission, though it has done some preliminary development work, and it has not yet initiated a mission to either of the “ice giant” planets, though such a mission was recommended by the last planetary science decadal survey.

Mars Sample Return. Exceeding NASA’s request, Congress is providing $264 million for the Mars Sample Return mission, with direction to have it ready for the launch window that opens in 2026. Late last year, an independent review recommended that NASA not rush the mission’s development and instead use the following launch window in 2028. The mission is highly complex and requires coordinating with international partners to develop and operate multiple vehicles that will gather, launch, and transport samples cached by the Perseverance rover, which is scheduled to arrive on Mars on Feb. 18.

Other Mars activities. Via the House report, Congress directs NASA to continue operating the Mars Reconnaissance Orbiter, which the agency had proposed to shut down to free up budget within its Mars program. Congress also directs NASA to outline plans to procure the services of a “commercial deep space communications relay” that would eventually replace the aging Mars orbiters that currently transmit signals between surface missions and Earth. NASA is authorized to use fiscal year 2021 funds for the procurement so long as such services are “available, scientifically necessary, and can be selected competitively.”

Planetary defense. Congress provides $156 million for planetary defense missions, including $66 million for the Double Asteroid Redirect Test (DART), a mission scheduled to launch this June that will collide with the smaller asteroid of a two-asteroid system to test the dynamical effects. NASA is also directed to request the resources necessary for its proposed Near Earth Object Surveillance Mission to meet a 2025 launch date. (Update: DART is now aiming to meet a secondary launch window that is open from November 2021 to February 2022; the spacecraft will still arrive at its destination close to its originally targeted date in September 2022.)

Webb Telescope. Congress meets NASA’s request of $415 million for the James Webb Space Telescope, marking what is expected to be the final appropriation for the mission before its long-awaited launch this fall.

Roman Telescope. The Nancy Grace Roman Space Telescope is receiving $505 million, keeping it on pace to launch in the mid-2020s despite the Trump administration’s proposal to cancel it. In their draft report, Senate appropriators objected that NASA appeared to expect Congress to fund the mission even though the administration requested no funds for it, making it difficult for them to allocate budget among competing priorities. The final statement instructs NASA to “refrain from requesting only part of the funding it requires to accomplish all of its missions.”

SOFIA. Congress is providing level funding of $85 million for the Stratospheric Observatory for Infrared Astronomy, an airplane-mounted telescope. The Trump administration had proposed to terminate the mission, citing its high operating costs and relatively low scientific productivity.

Other activities. Within the $1.77 billion Congress is providing for the Astrophysics Division, $766 million is available for all activities other than SOFIA and the Webb and Roman telescopes. NASA had requested $819 million, meaning some planned activities will not be fully funded.

Increase in available budget. Congress has provided the Heliophysics Division with a budget that is $118 million, or 19%, higher than NASA’s request. Although the requested amount represented a significant decrease in the division’s topline, that primarily reflected a temporary reduction in funding needed for the Interstellar Mapping and Acceleration Probe (IMAP), owing to a decision to award its launch contract early using fiscal year 2019 funds. Thus, on top of the $26.5 million increase over the division’s fiscal year 2020 budget, tens of millions of additional dollars will be available this year across the division.

New missions. Part of the funding increase will go toward early work on two new missions. Congress directs that NASA add $15 million over the amount requested for the Geospace Dynamics Constellation, a mission that will employ multiple spacecraft to study the dynamics of Earth’s upper atmosphere on a global scale. In addition, $10 million is provided to start work on the complementary DYNAMIC (Dynamical Neutral Atmosphere-Ionosphere Coupling) mission, reflecting a recommendation in the recent midterm assessment of the 2013 heliophysics decadal survey. 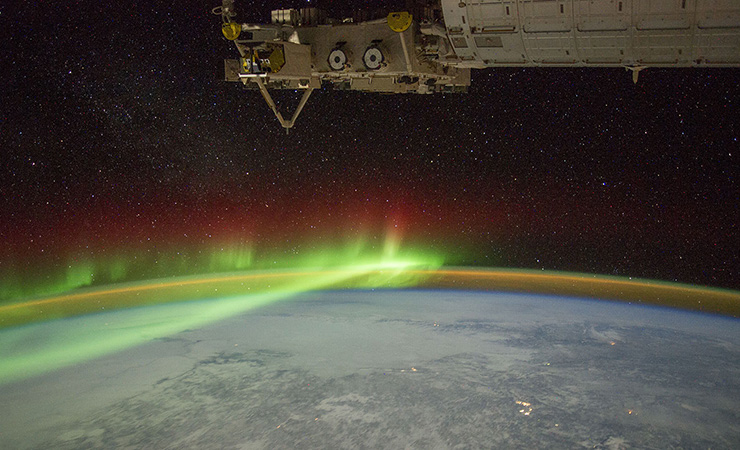 Aurora in the Earth’s ionosphere, photographed from the International Space Station. Congress is providing initial funding for two new heliophysics missions to study the physical dynamics of the upper atmosphere.

Proposed cancellations. Via the House report, Congress provides about $145 million for the PACE (Plankton, Aerosol, Cloud, ocean Ecosystem) satellite and about $25 million for the CLARREO Pathfinder instrument for measuring solar radiation. The Trump administration had proposed to cancel both projects.

Pathfinder program. The budget for the Earth System Science Pathfinder program is increasing from $299 million to $344 million. Within that account, the budget for Venture class missions is increasing from $223 million to $264 million. The Pathfinder program supports a portfolio of low-cost missions, instruments, and investigations that advance work on emerging scientific priorities and measurement capabilities. Congress states that GEOCarb, a project currently under development, will demonstrate the feasibility of hosting an environmental monitoring instrument on a communications satellite and could represent a new, cost-effective model for conducting Earth science observations.

Research funding. Congress directs NASA to increase funding for its Earth Science Research and Analysis account from $321 million to at least $335 million.

Nuclear power. Congress directs NASA to keep the budget for nuclear thermal propulsion systems at no less than its current $110 million level, with at least $80 million specified for the “design of test articles that will enable a flight demonstration.” While Congress has previously directed NASA to prepare for such a demonstration in 2024, the new appropriation does not specify a target date. NASA asked Congress to push back the demonstration until later in the decade and to grant the agency flexibility to expand work on nuclear electric propulsion systems and fission-based surface power systems. Now, Congress is instructing NASA to submit a “multi-year plan that enables technology development leading to an in-space propulsion system demonstration and describes future missions and propulsion and power systems enabled by this capability.”

In-space service and assembly. Congress provides continued funding of $227 million for its first On-Orbit Servicing, Assembly, and Manufacturing (OSAM-1) mission, which aims to robotically refuel Landsat 7 and assemble a 3 meter communications antenna in space. In addition, it provides up to the requested level of $21 million for OSAM-2, previously called Archinaut One, which aims to 3D print 10 meter beams that will unfurl solar arrays.

Workforce diversity. NASA is directed to submit a report to Congress on the “racial and cultural makeup” of its current workforce and its plans for increasing diversity and cultural acceptance through recruitment, retention, and advancement strategies, among other steps.

STEM outreach. The budget for NASA’s Office of STEM Engagement is increasing $7 million to $127 million. The increase will raise the Space Grant program budget by $3 million to $51 million and the Minority University Research and Education Project budget by $2 million to $38 million. NASA’s EPSCoR program, which funds capacity-building projects in states and territories that have historically received smaller shares of federal grant funding, will see its budget increase $2 million to $26 million.

The budget for the separate Flight Opportunities program, which provides opportunities to fly small payloads on suborbital launches, is increasing from $25 million to at least $27 million. Congress states that, in addition to commercial ventures and researchers, the program "may be used to support undergraduate and graduate work." Congress specifies that the Science Mission Directorate’s Science Activation account, which is housed within the Astrophysics budget, will receive steady funding of at least $45.6 million.