An explanatory statement accompanying the bill provides detailed funding and policy direction, and language from the House Appropriations Committee report conveys additional direction unless specifically negated in the final statement. The Senate Appropriations Committee did not formally submit its report, but language from a publicly released draft is incorporated in the explanatory statement. For summary tables, consult the FYI Federal Science Budget Tracker. 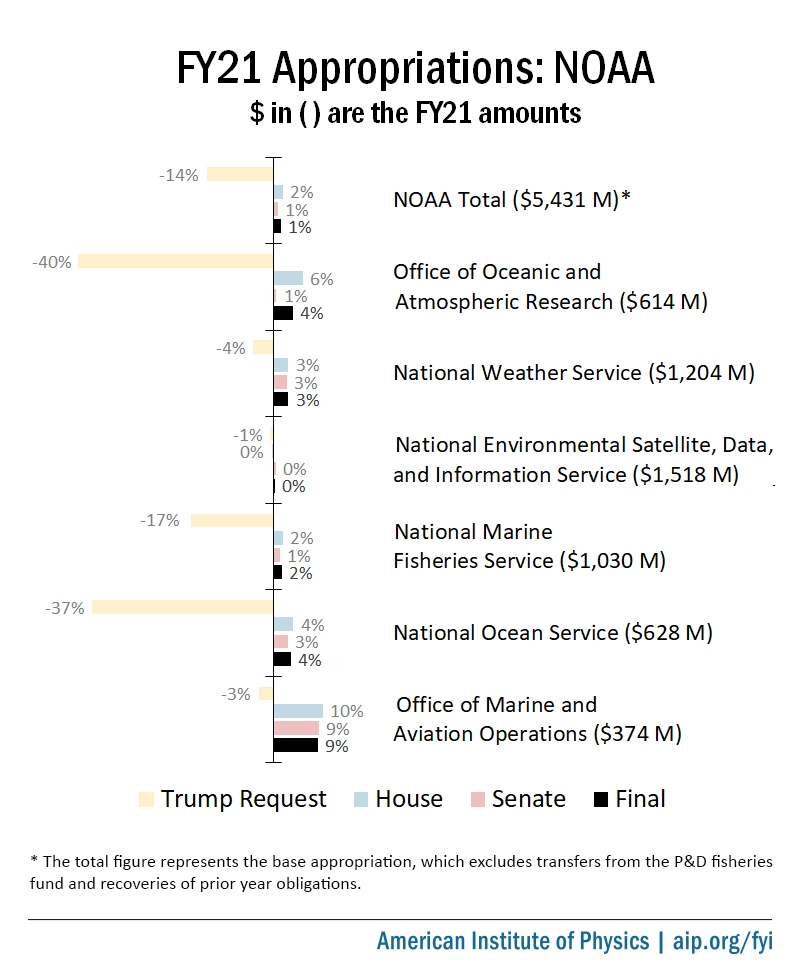 The budget of NOAA’s Office of Oceanic and Atmospheric Research is increasing 4% to $614 million. The office supports a broad portfolio of in-house and extramural research on weather and climate modeling, coastal resilience, and ocean exploration, among other areas. Most of the additional funding is directed toward climate and weather research activities.

NOAA is directed to spend $9 million on studies of “stratospheric conditions and the Earth's radiation budget,” $5 million more than the amount specified last year. The House report explains these studies can address “the impact of the introduction of material into the stratosphere from changes in natural systems, increased air and space traffic, proposals to inject material to affect climate, and the assessment of solar climate interventions.”

Congress also provides $43 million for the Regional Climate Data and Information program, a $2.5 million increase. The additional funding is allocated to the Regional Integrated Sciences and Assessments program, which develops decision-support tools for disaster preparedness and city planning, with Congress directing NOAA to expand its geographical coverage.

Congress also encourages NOAA to increase collaboration with the Department of Energy on “climate research and modeling efforts, including, as appropriate, the sharing of resources and the exchange of detailees, in order to minimize the duplication of efforts and to increase the cross pollination of ideas and research.”

Coastal inundation. The House report proposed that the Office of Oceanic and Atmospheric Research “initiate a research agenda to improve understanding of inundation risks to coastal areas as a result of the climate crisis and to meet the information needs of decision-makers as they consider how to appropriately adapt and increase resilience to such impacts.” The final statement stipulates that this be a cross-NOAA effort and directs the agency to consider establishing a Cooperative Institute for Coastal Resilience and Adaptation.

Earth Prediction Innovation Center. Over the past two years, NOAA has worked to establish a “virtual center” known as EPIC that will enable outside researchers to more easily contribute improvements to the code used in the agency’s Earth system models. Congress directs NOAA to spend no less than $13 million on EPIC for fiscal year 2021, which is $5 million above the amount it specified last year. NOAA had requested a $7 million increase. Noting that NOAA is expected to award the EPIC management contract this year, Congress directs the agency to “continue building the community-based infrastructure so that participants can utilize external compute resources, including cloud technologies, to interface with the agency.” It adds that NOAA is expected to “continue to centralize available observations used in operational models in a publicly accessible manner by leveraging cloud technology within the EPIC infrastructure.”

Tornado warning program. Via the House report, Congress allocates the $3.2 million requested to create the Tornado Warning Improvement and Extension Program, an effort mandated by Congress with the aim of pushing tornado prediction lead times beyond one hour. It also encourages NOAA to establish a severe weather extramural testbed that would focus on improving convection models and using new techniques for data assimilation and ensemble prediction.

Weather research prioritization. As part of its direction for the National Weather Service, Congress instructs NOAA’s science advisory board to publish a report that will support policymakers' prioritization of investments in weather forecasting, modeling, data assimilation, and supercomputing over the next ten years. The direction replaces a House proposal for NOAA to commission the first-ever decadal survey for the “U.S. weather enterprise.”

Ocean mapping. Congress is increasing the budget for the Ocean Exploration and Research program by $1 million to $43 million and directs NOAA to accelerate mapping of the U.S.’ Exclusive Economic Zone, which was a Trump administration priority. NOAA is also directed to “maximize” funding for the Ocean Exploration Cooperative Institute and deep ocean acoustic research, and to work with the Department of Defense and other relevant agencies to “continue fundamental ocean exploration in which open source data are collected for the oceanographic community and private industries in real-time through telepresence technology.”

Education Office. Congress rejects the Trump administration’s proposal to eliminate all major programs in NOAA’s Office of Education and instead increases the office’s budget by $3 million to $33 million. The increase is directed entirely to the José E. Serrano Educational Partnership Program with Minority-Serving Institutions.

Workforce diversity. Congress directs NOAA to “take discrete steps to promote racial and cultural acceptance and diversity within its workforce,” including by reporting on the diversity of its current workforce and its plans to increase the recruitment and retention of employees from diverse backgrounds.