Eric Lander, tapped in January to lead the White House Office of Science and Technology Policy, is now one of President Biden's last Cabinet officials yet to be confirmed. At his nomination hearing last month, Lander addressed controversies that prompted concerns among senators and defended his commitment to equity. 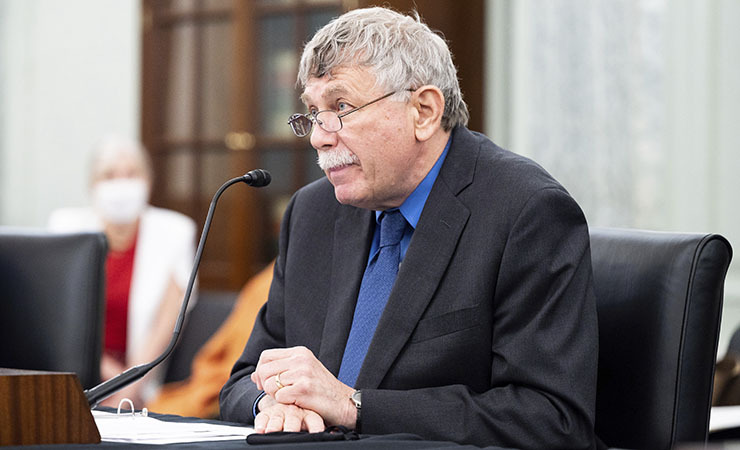 It has been almost four months since President Biden nominated geneticist Eric Lander to lead the White House Office of Science and Technology Policy and announced he would have a spot on the Cabinet. Since then, almost all of Biden’s other Cabinet nominees have cleared the Senate confirmation process, but Lander’s nomination has progressed on a slow track and a floor vote is not yet in sight.

Lander’s nomination hearing before the Senate Commerce, Science, and Transportation Committee last month offered a glimpse into some of the issues that have kept his confirmation from moving ahead quickly. While no committee members expressed opposition to Lander’s nomination, both Democrats and Republicans asked him pointed questions about controversies from his years at the Broad Institute, a leading human genetics research center he founded in 2003 and directed up until his nomination. Subjects included his attitudes toward women in STEM, encounters with convicted sex offender Jeffrey Epstein, and potential conflicts of interest stemming from the inextricability of his connection to the Broad.

Aside from those issues, Lander also fielded members’ queries about a range of science policy matters, such as congressional proposals to launch a national R&D initiative and President Biden’s idea of creating an Advanced Research Projects Agency for Health (ARPA–H).

To keep up to date on science-related nominations across the government, consult FYI’s Federal Science Leadership Tracker.

Sitting in as committee chair, Sen. Tammy Duckworth (D-IL) told Lander at the beginning of the hearing she was “troubled” by some of his past actions, saying,

You have been criticized for downplaying the contributions of the female Nobel laureates [Jennifer Doudna and Emmanuelle Charpentier], for toasting a well-known racist, misogynistic anti-Semite, and for attending lunch meetings with the late, disgraced Jeffrey Epstein. … If confirmed, you will have the authority to promote the representation of women and minorities in STEM fields. So, I strongly encourage you to use this hearing as an opportunity to explain how you've learned from your past mistakes.

Lander attended two meetings where Epstein was present in 2012, which were reported in the press after Epstein’s sex crimes became a national story in 2019. In 2016, Lander published an essay on the origins of the CRISPR gene-editing technique that failed to fully acknowledge Doudna’s and Charpentier’s contributions or that the Broad Institute was engaged in a patent dispute with them. In 2018, Lander toasted DNA co-discoverer James Watson at a birthday celebration despite Watson’s long and well-publicized history of making derogatory remarks about women, Black people, and Jews, among other groups.

The 2016 CRISPR article was also brought up by Cynthia Lummis (R-WY), who said, “I looked into the allegations of sexism, and it is unclear to me what your motives were. But it is clear that you wanted to make sure your labs got the patents and the credit for CRISPR technology, and that in the process you may have marginalized or trivialized the contribution of two scientists whose work was essential in making the CRISPR breakthrough possible.”

Responding, Lander remarked, “A very important value to me throughout my whole career has been championing scientists to make sure they get credit for their work.” He continued, “I made a mistake. I should have written those paragraphs differently to make my intention crystal clear. I have enormous respect for Drs. Doudna and Charpentier and the important work they've done throughout their careers.”

Throughout the hearing, Lander sought to convey his commitment to fostering diversity in STEM, saying in his opening statement that he would increase diversity in OSTP and the President’s Council of Advisors on Science and Technology, as he had at the Broad Institute.

He also resolved to develop “a plan to increase the numbers of women and underrepresented people in STEM careers by 50%” over an unspecified period, as well as to work to address geographic disparities in access to STEM opportunities. He remarked,

Science has been unwelcoming to women and people of color. It's been concentrated in a few regions of the country. And most Americans lack access to great STEM schools, and many even to broadband. And lack of inclusion is not just deeply unfair, it's a risk to America's success.

Committee Ranking Member Roger Wicker (R-MS) echoed Duckworth’s concerns about Lander’s meetings with Epstein and pressed Lander to provide further information about their interactions. Epstein was known for ingratiating himself with prominent scientists and funded a number of research projects, including at MIT and Harvard University, which co-host the Broad Institute. However, neither university has found that any of that funding went to the Broad.

Lander reiterated that the Broad Institute never solicited or received funds from Epstein or his foundation and maintained that he met Epstein only briefly at the two meetings and was not aware of his “sordid history” at the time. “As soon as I learned about it, I had nothing to do with him thereafter,” he added. A document the White House submitted after the hearing noted the meetings together spanned a total of 90 minutes.

Wicker pressed Lander to submit a full 10 years of the Broad Institute’s donor records, as only eight had been turned over to the committee. Although Lander was unsure if additional records were available, he said he would “try” to provide them.

“Well, I wish you would. It's important to us that we asked for 10 for a reason,” Wicker replied. While an additional two years of records would extend their coverage to the period of the Epstein meetings, Wicker did not specify that was the reason for seeking them.

As a general matter, the Broad has numerous financial connections that could present potential conflicts. For instance, just after Lander left, the institute announced it had accepted a $150 million endowment from the Eric and Wendy Schmidt Foundation to establish a new center that will apply machine learning methods to biology. In addition, Eric Schmidt, who was formerly CEO of Google, was named the new chair of the institute’s board of directors. Notably, Schmidt has also been the chair of the National Security Commission on Artificial Intelligence, which recently made highly ambitious recommendations for U.S. government actions to support the field of AI and technology innovation more broadly.

Asked by Wicker on whether he plans to return to the Broad after his White House job, Lander confirmed he “probably will.” Pressed on whether the connection might influence his work to favor the institute, Lander replied, “Senator, if confirmed, I will do that job in a completely even-handed way. I have said, I particularly care about the fact that we concentrate far too much funding in a few places in this country. One of my priorities is to make sure that in fact we bring all of America into science.”

Alluding to the Endless Frontier Act legislation currently under consideration in the Senate, which focuses on the National Science Foundation, Sen. Ben Ray Luján (D-NM) asked about the relevance of work done by the Department of Energy and highlighted a letter from the directors of the 17 national labs that recommends Congress “embrace a broader approach to advancing the nation’s international technology leadership and economic competitiveness.”

Without commenting on specific proposals, Lander agreed that NSF and DOE do complementary work. “We need to strengthen all aspects of our innovation ecosystem. This is a very consequential moment for the United States,” he said.

Asked by Sen. John Thune (R-SD) about the contributions of private sector R&D to national initiatives, Lander replied that more should be done to bridge “gaps” between fundamental research and industrial applications. He elaborated, “Sometimes that's going to be creating infrastructure that many startup businesses need but can't afford to produce themselves. … Sometimes it's going to be de-risking technologies, because no sensible investor would invest in those technologies because of the risk.” However, he also argued against adopting approaches that are not based on “free enterprise.”

“We have to do this in an American way. We watch China doing this in the way of a civil-military fusion, and that's just not our way of doing it,” he said.

Responding to a question about the ARPA–Health concept from Sen. Roy Blunt (R-MO), the top Senate Republican appropriator for NIH, Lander characterized it as an example of a mechanism for addressing “market failures” and bridging research with applications. He said the agency could, for instance, support high-risk, high-reward work to develop “platform” technologies, such as a universal mechanism for targeting drugs to specific cell types, that could generate a wide spectrum of applications. “No NIH basic research grant could do such a thing … and no sensible startup biotech would take that on,” he said.