Former Sen. Bill Nelson (D-FL), President Biden’s nominee for NASA administrator, spent most of his career in Congress and led panels responsible for space policy over a total of 14 years. 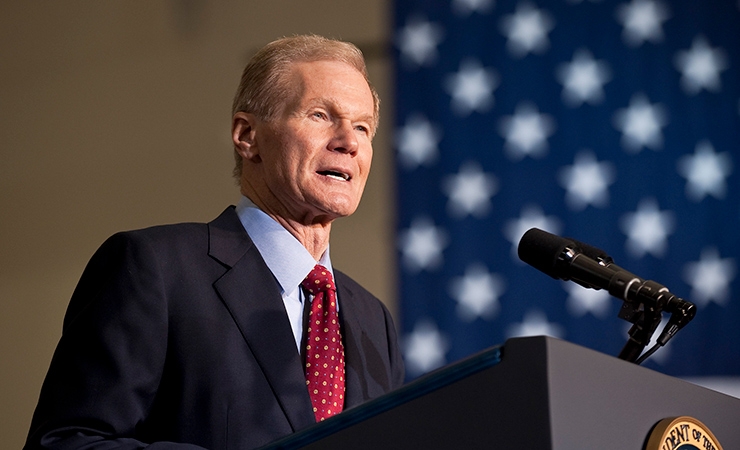 Then-Sen. Bill Nelson (D-FL) speaking during a 2010 visit by President Obama to the Kennedy Space Center.

On March 19, President Biden announced his nomination of former congressman and senator Bill Nelson (D-FL) to be NASA administrator. Nelson has maintained a strong interest in the agency over the course of his career, including for a combined total of 14 years as the chair of the House and Senate subcommittees responsible for space policy. He is also someone Biden knows well from the eight years they served together in the Senate.

In championing NASA, Nelson has focused on promoting its human spaceflight program, and in 1986 he arranged to fly aboard the space shuttle Columbia. In recent years, he has had his greatest impact as an advocate for developing NASA’s controversial Space Launch System heavy-lift rocket. While Nelson has given comparatively little attention to the agency’s science programs, he has generally been supportive of them as part and parcel of his support for the agency as a whole.

At 78, Nelson is set to be the oldest administrator in NASA’s history by a significant margin, and his nomination defies earlier speculation that Biden would choose a woman to lead the agency for the first time. Nelson also does not meet the standard he himself set out when he unsuccessfully opposed the nomination of the last NASA administrator, then-Rep. Jim Bridenstine (R-OK), partly on the grounds that Bridenstine was not a “consummate space professional.” Nevertheless, Nelson’s selection has been broadly welcomed in Congress and he is unlikely to face serious obstacles to his own confirmation.

NASA a focus throughout Nelson’s career

Nelson has often stressed the depth of his home-state roots, pointing out that he is a fifth-generation Floridian. He attended the University of Florida before transferring to Yale University, where, indicative of his lifelong interest in NASA, he wrote a thesis titled, The Impact of Cape Kennedy on Brevard County Politics. Nelson received a law degree from the University of Virginia, and, following stints in the Army and as a staff member in the Florida governor’s office, he won election to Florida’s House of Representatives in 1972.

In 1978, Nelson won election to the U.S. House, representing the district encompassing NASA’s Kennedy Space Center at the dawn of the space shuttle era. He became chair of the House subcommittee responsible for NASA policy in 1985, and in that position became the second politician to fly aboard the shuttle, following Sen. Jake Garn (R-UT), who was then the lead Senate appropriator for NASA. 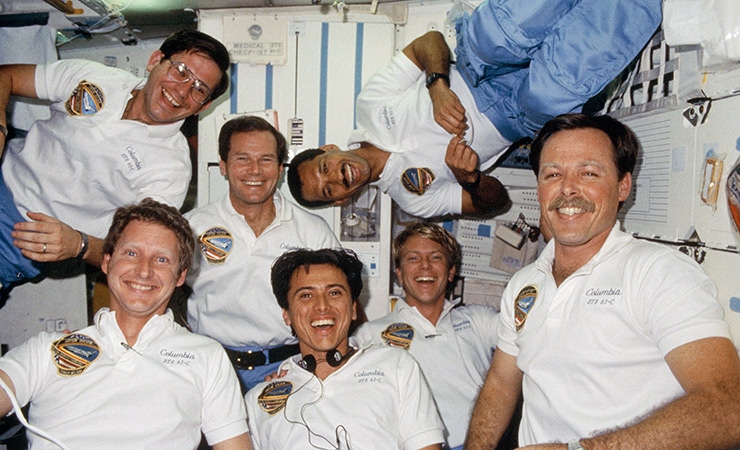 Then-Rep. Bill Nelson (D-FL), third from left, aboard the space shuttle Columbia in 1986. Floating to the right of him is the shuttle’s pilot, Charlie Bolden, who served as NASA administrator from 2009 to 2017.

Although NASA intended to include other politicians on future shuttle missions, 10 days after Nelson’s flight concluded the shuttle Challenger exploded on launch, killing its crew, including schoolteacher Christa McAuliffe. The disaster was a moment of reckoning for NASA management, which was found to have fostered an overly cavalier attitude toward mission safety.

During his time as subcommittee chair, Nelson was focused on maintaining “assured access to space” for the U.S., which only intensified after Challenger, when he convened additional hearings on the recovery of the shuttle program. During this same period, he also supported and maintained oversight of the project that would eventually become the International Space Station.

Nelson declined to run for re-election in 1990, making a failed bid to be the Democratic nominee in that year’s election for Florida governor. In 1994, he was elected the state’s treasurer and insurance commissioner and served in that role until he won a seat in the U.S. Senate in 2000. In 2005, he became the ranking Democrat on the space policy subcommittee of the Senate Commerce, Science, and Transportation Committee.

When Democrats took over the Senate in 2007, Nelson became the subcommittee’s chair and held the job for eight years. When Republicans retook the Senate in 2015, Nelson moved up to be ranking Democrat of the full committee, staying in the role until he lost his bid for a fourth Senate term in 2018. In 2019, NASA appointed him a member of its Advisory Council.

By the time Nelson arrived in the Senate, NASA’s robotic science missions had begun to take a more prominent place in the agency’s portfolio. One of the first hearings he convened as subcommittee chair in 2007 concerned Earth science observations. In this same period, he also protested moves by the George W. Bush administration to restrict NASA scientists from speaking out about climate change. Nelson later renewed his focus on scientific integrity under the Trump administration.

Mainly, though, Nelson continued to concentrate on NASA’s human spaceflight program, which became an urgent subject when Columbia was destroyed during atmospheric reentry in 2003. To succeed the shuttle program, the Bush administration initiated the Constellation program in 2005, comprising rockets and crew vehicles configurable to different tasks, such as low Earth orbit operations and crewed Moon missions. However, President Obama cancelled the program in 2010, citing its expense, and proposed to rely on commercially designed and operated vehicles to ferry cargo and crew to the International Space Station.

For his part, Nelson opposed abandoning Constellation and was skeptical of commercial efforts. Working with his Republican counterpart on his subcommittee, Sen. Kay Bailey Hutchinson (R-TX), he drafted the NASA Authorization Act of 2010, which established a compromise program backing the commercial effort while also requiring NASA to develop the Space Launch System (SLS).

Critics have nicknamed SLS the “Senate Launch System,” because, in addition to Nelson, the project has had a variety of powerful backers in Congress who represent states with a stake in its construction. Their support has sustained funding for SLS, even though it is much more expensive than competitive commercial alternatives, most notably SpaceX’s reusable Falcon Heavy rocket, which has already beaten it into operation.

In the wake of the 2010 act, NASA framed SLS as the only vehicle capable of providing the power needed for crewed missions to destinations as far away as Mars. Later, the Trump administration’s Artemis program envisioned using SLS in tandem with commercial vehicles to mount a sustained lunar exploration campaign that would lay groundwork for commercial lunar activities as well as an eventual Mars mission.

However, given its expense, the role of SLS in Artemis has also come under scrutiny and the broader question of how NASA should integrate its own efforts with commercial ventures will remain pressing. While this issue is most pertinent to crewed exploration, it will also bear on matters such as how NASA responds to congressional pressure to use SLS for outer planets science missions or how aggressively it expands on nascent efforts to use commercial contracts to carry out scientific investigations.

Nelson will have the opportunity to outline his views on NASA’s current agenda at his nomination hearing. In addition, he is likely to face questions about his qualifications similar to the ones he posed to Bridenstine four years ago.

At that time, Nelson argued that NASA requires a leader who is “technically and scientifically competent and a skilled executive” and has the ability to “make the complex and nuanced engineering, safety, and budgetary decisions for which the head of NASA must be accountable.” In addition, he stressed NASA’s leader should be someone who can “unite scientists, engineers, commercial space interests, policymakers, and the public on a shared vision for future space exploration.”

Although Nelson questioned whether a politician should lead NASA, he said his “greatest concern” about Bridenstine was that he had been a particularly divisive House member, including by speaking against efforts to seek bipartisan accord. Later, though, Nelson acknowledged at another hearing that Bridenstine had earned high marks within the agency as its administrator and appeared committed to keeping it “apolitical.”

Now, with Nelson up for his old job, Bridenstine has offered an endorsement, writing, “He has the political clout to work with President Biden’s Office of Management and Budget, National Security Council, Office of Science and Technology Policy, and bipartisan members of the House and Senate. He has the diplomatic skills to lead an international coalition sustainably to the Moon and on to Mars.”

As Nelson prepares for questions from his former Senate colleagues, few are likely to cast doubt on his dedication to NASA’s mission and independence. More uncertain is how he would adapt the view of the agency he developed over decades as a member of Congress to the distinct challenges he would face as its leader in the 2020s.