NSF Director Sethuraman Panchanathan discussed the Biden administration's vision for a new agency directorate with congressional appropriators, who expressed their own priorities on matters such as the geographic distribution of NSF grant funding. 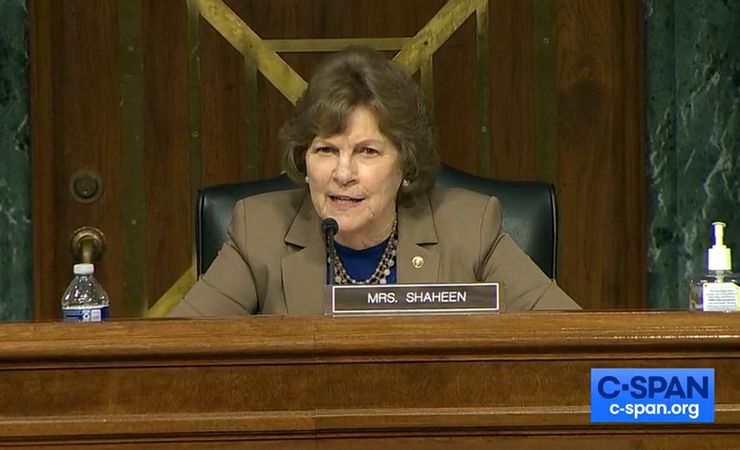 National Science Foundation Director Sethuraman Panchanathan appeared before House and Senate appropriators this week to discuss the prospect of substantially increasing funding for the agency. Elaborating on the new NSF directorate proposed in the preliminary budget request President Biden sent to Congress last week, Panchanathan called it a “cross-cutting” entity dedicated to translating research supported by NSF and other federal agencies into practical applications.

Leading Democratic and Republican appropriators expressed general support for bolstering NSF. They did not, though, directly endorse the administration’s request for a 20% increase in NSF’s $8.5 billion annual budget or its multi-year proposal to spend $50 billion on the agency through a special infrastructure package. They also did not comment extensively on related congressional proposals that likewise seek to create a new NSF directorate: the Endless Frontier Act and the House Science Committee’s NSF for the Future Act.

The appropriators did express a variety of views on what any expanded effort at NSF should prioritize. Many, in particular Republicans, stressed that more money should be distributed to states and institutions that have historically received a lower share of research funding. Some also sought assurances that the proposed directorate would not overlap with efforts of other agencies or infringe on NSF’s traditional mission of supporting fundamental research.

In his testimony, Panchanathan stated that the $50 billion proposed in Biden’s infrastructure plan would be allocated to the new directorate over eight years. He also indicated the directorate would focus on particular applications, such as “artificial intelligence, high performance computing, disaster response and resilience, quantum information systems, robotics, advanced communications technologies, biotechnology, and cybersecurity.”

Intense global competition and a rapidly changing technological landscape requires the United States to take a different approach to research and development investment that brings science and technology innovations to market much more rapidly. Doing so requires unleashing the potential of economies of innovation across the nation and tightly integrating curiosity-driven research and use-inspired outcomes.

The scientific pursuit of knowledge and understanding cannot be separated from the development of new technological capabilities. And, in turn, those new capabilities allow us to pursue new research questions that were either unseen or out of reach.

Asked to elaborate on the new directorate’s proposed structure, Panchanathan said it would be a “horizontal that weaves all the verticals of the other directorates,” harvesting research ideas from across NSF and translating them into applications “at speed and scale.” He also described the directorate and existing NSF directorates as akin to the double helix of a DNA molecule, saying they should be “highly intertwined.” 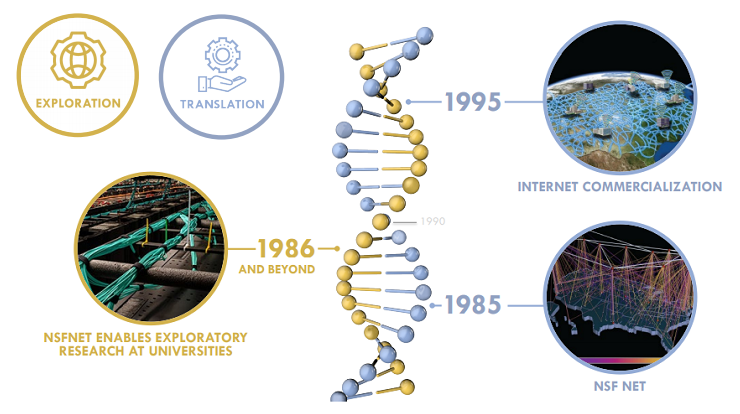 A graphic used by Panchanathan to depict the feedback between exploratory research and technology commercialization.

“There are many examples here that we will draw from. We may not be necessarily replicating them. DARPA is talked about, or other kinds of agencies that have translational programs, including NSF. [They] can be taken into consideration in terms of building the new models that we need to build, in addition to scaling our existing models,” he said.

Rep. Matt Cartwright (D-PA), the new chair of the House appropriations subcommittee for NSF, remarked in his opening statement that he was “pleased to see the proposed funding boost for [NSF] and plans to broaden the mission of NSF in order to accelerate the translation of basic research into new technologies.”

I'm very pleased that we're talking about making investments in R&D to maintain U.S. competitiveness. … But I also think we need to be thoughtful about how we proceed.

We should devote resources to successful existing programs whenever possible. Where there are proposals to create new programs, we need to ensure that the agency's tasks are the right ones, and that there are no other agencies that are better positioned to carry out the goals or that are already serving in the role. As we push forward to beat our global competitors, we need to ensure that we do not lose what makes NSF so special.

Addressing Panchanathan, she began her questions by asking about the average size and length of NSF grants and the fraction of highly ranked grant proposals that go unfunded. He replied that on average NSF funds about a fifth of the grant proposals it receives each year but that about a third of the proposals it receives are ranked highly meritorius. He said the average size of NSF grants is about $200,000 and the average duration is three years

Asked by Shaheen what would be optimal, Panchanathan suggested increasing the average award size to $300,000, the average award duration to four-to-five years, and the grant proposal success rate to about 30%. He estimated these changes would require roughly doubling the NSF budget and argued that realizing the potential of the proposed directorate would warrant another doubling on top of that.

However, several Republican members questioned whether NSF could wisely spend a sudden surge in funding. For instance, the top Republican on the House subcommittee, Rep. Robert Aderholt (R-AL), suggested the additional $3 billion that NSF received in 2009 through economic recovery legislation may have been counterproductive due to the dropoff in funding that followed, which left newly trained researchers unfunded.

Panchanathan replied that the $50 billion proposed for NSF in the infrastructure plan would be spent over multiple years and argued the agency would be able to quickly absorb the money. He remarked,

We are only funding 50% of what we receive that could be funded. So right there, a doubling of the NSF budget today is going to make it possible to unleash those ideas. …

Now you add on top of that what we need for these innovation accelerators, what we need for the entrepreneurial ecosystem to be flourishing, what we need to have the SBIR/STTR programs achieving the full spectrum of their potential — I can tell you a quadrupling of the funding is just barely enough to be able to take us to all the ideas being unleashed so that we might be far ahead of the competition.

At both the House and the Senate hearings, many questions concerned whether increased funding would have broad benefits across the U.S

Like Shaheen, Sen. Jerry Moran (R-KS), the top Republican on the subcommittee, said he hopes increased funding would raise the proposal success rate, but added it should also “enable much broader participation in basic research from institutions across the country.” He stressed that 10 states currently receive more than half of all NSF funding.

On the House side, Aderholt also called for NSF to spread funds more widely. Referring to a proposal in Biden’s request to increase funding for NSF’s STEM diversity efforts by $100 million, he suggested that initiative should also encompass geographic diversity. “If Congress provides the increases for these and other programs across the agency, how would this idea of geographic diversity impact your plans," he asked, suggesting NSF invest in the future of areas such as the Deep South and Appalachia.

Panchanathan agreed that geographic diversity should be considered and pointed to NSF’s ongoing initiative in artificial intelligence, which he said he refers to as “AI in every state.” Noting that the seven AI institute awards NSF made last summer have components in 20 states, he said that upcoming awards would further expand that reach as part of an effort to create nationwide “ecosystems of prosperity.”

Sen. Jack Reed (D-RI) asked specifically about plans for EPSCoR (Established Program to Stimulate Competitive Research), which allocates grants to designated states that historically receive a lesser share of federal R&D funds. Panchanathan replied, “I would like to make sure that the regional innovation accelerators are everywhere across our nation. And this requires not only the EPSCoR support being augmentative, but [also support from] the mainstream activities of NSF.”

Panchanathan with Sen. Chris Coons (D-DE), who is sponsoring legislation that would create an NSF program dedicated to creating “innovation centers” in regions that are not already leading R&D hubs.

‘Are we trying to reinvent the wheel?’

Various appropriators also sought clarity on how NSF’s new efforts would relate to those of other science agencies, such as the Department of Energy. Sen. Joe Manchin (D-WV), who chairs the Senate committee that oversees DOE, noted for instance that the department’s national labs have long played a role in technology transfer.

“Are we trying to reinvent the wheel?” Manchin asked, suggesting that at least a portion of the funds proposed in the Endless Fronter Act for technology development should be allocated to national labs. He pressed Panchanathan, “Are you able to commercialize these technologies? Do you have the experience of commercializing them, such as the labs?”

Panchanathan replied that NSF does already have a commercialization infrastructure and that he is actively seeking out partnerships with other agencies to avoid duplication of effort.

Shaheen similarly asked about potential overlap with DARPA, noting its large footprint in artificial intelligence and quantum research. Panchanathan responded, “Partnerships of every form, of every type are very, very important for us to advance these technologies.”