President Biden is asking Congress to jumpstart budgets for R&D programs across non-defense agencies in fiscal year 2022, with a focus on those connected to climate science, clean energy innovation, biomedical research, and emerging technologies. 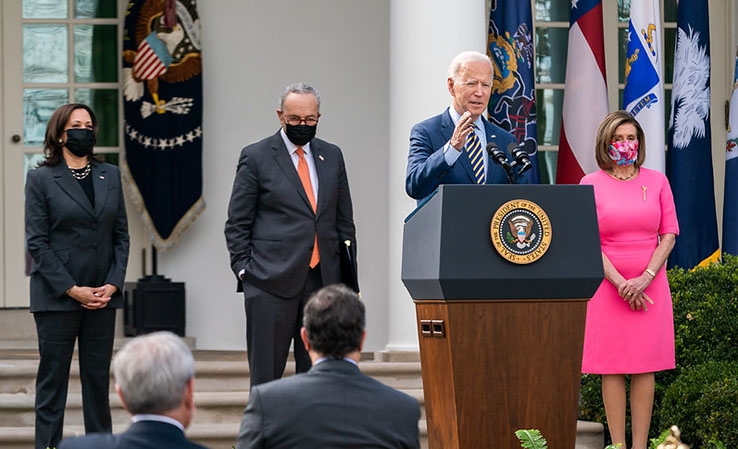 President Biden delivers a speech on pandemic recovery in March.

In the preliminary budget request President Biden sent to Congress on April 9, he proposes significantly increasing spending on research and development programs across non-defense agencies for fiscal year 2022. The request kicks off the annual appropriations cycle and is mostly separate from the more than $200 billion in R&D spending that Biden recently proposed as part of a special, eight-year infrastructure initiative.

Within his requests for R&D, Biden prioritizes climate and biomedical science, proposing to create advanced research project entities to focus work in each area. He also seeks a 35% increase in funding across the federal government for “clean energy innovation” as a first step toward quadrupling spending in the area over four years. Throughout, the budget request emphasizes a need to tackle social disparities, including by increasing the research capacity of minority-serving educational institutions.

As the Budget Control Act of 2011 expires with the current fiscal year, Biden’s request is the first in a decade that does not have to contend with statutory caps on federal spending. However, with the Senate filibuster still firmly in place, appropriations legislation will require support from some Senate Republicans, whose leaders object that the request would raise defense spending by less than 2% even as it proposes to increase non-defense spending by 16% overall.

A more complete version of Biden’s request is expected to be released within a month or two. Meanwhile, Congress will set to work holding hearings, negotiating spending levels, and drafting appropriations legislation that it will likely release sometime in the summer. Proposals from both the executive and legislative branches will be added to FYI’s Federal Science Budget Tracker as they become available. 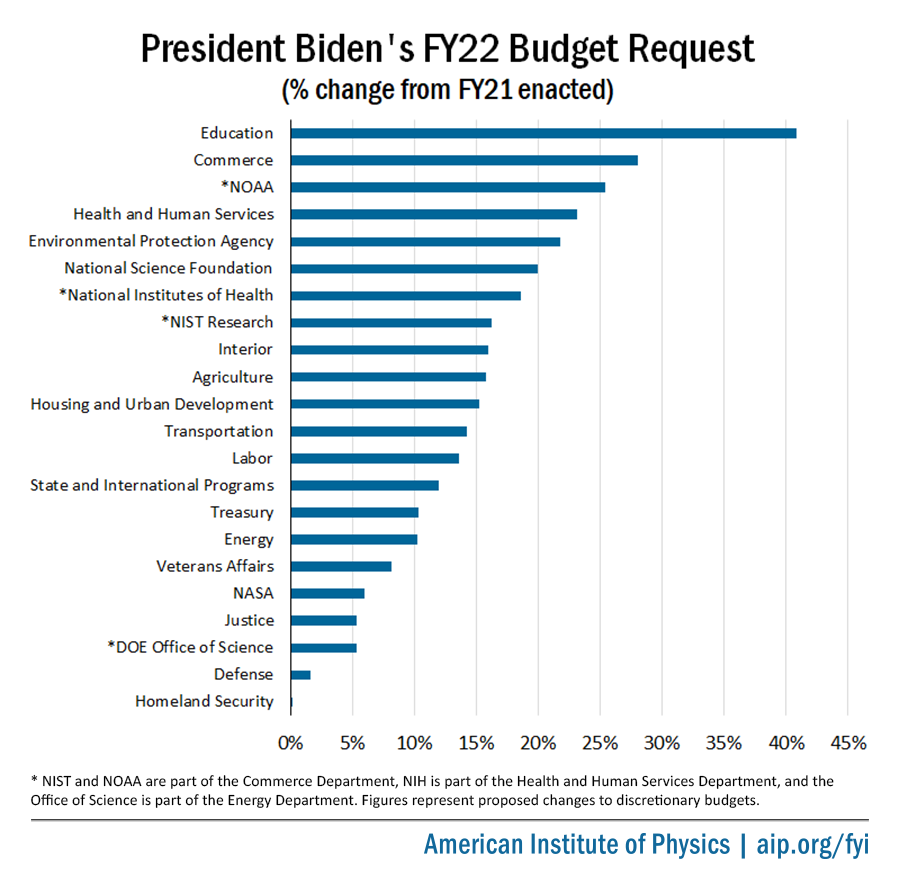 The Department of Energy’s budget would increase 10% to $46 billion under the request. Of the total, the administration states it seeks “more than $8 billion, an increase of at least 27% over 2021 funding, in technology such as advanced nuclear energy technologies, electric vehicles, green hydrogen, and even innovative approaches to air conditioning and refrigeration.” A renamed Office of Fossil Energy and Carbon Management would receive increased funding for R&D aimed at cutting emissions in “sectors and applications that are difficult to decarbonize.”

The administration also proposes DOE contribute $700 million to a new cross-government effort that would pair its Advanced Research Projects Agency–Energy with a new Advanced Research Projects Agency for Climate (ARPA–C), which would have a combined annual budget of $1 billion. “Together, these initiatives would support transformative solutions for carbon-pollution free energy, adaptation, and resilience against the climate crisis and lay the foundation for future improvements in research and development across multiple agencies,” the administration states.

The DOE Office of Science’s current $7.0 billion budget would increase to $7.4 billion under the request. Research priorities identified for the office include climate science, “novel materials and concepts for clean energy technologies,” and “artificial intelligence and computing to enhance prediction and decision-making across numerous environmental and scientific challenges.”

The administration also seeks to expand DOE funding for research and infrastructure upgrades at minority-serving institutions, including by establishing a climate research center. The proposal echoes Biden’s infrastructure plan, which proposes creating a “national lab focused on climate” that would be “affiliated with” a Historically Black College or University.

NASA’s budget would increase from $23.3 billion to $24.7 billion. The agency’s $2 billion Earth science budget would increase by $250 million “to initiate the next generation of Earth-observing satellites.” Without proposing specific amounts, the administration expresses support for various astrophysics and planetary science projects, including the Mars Sample Return mission, a multi-billion-dollar effort still in its early R&D and planning phases.

Funding for the Artemis lunar exploration campaign would increase by $325 million, well less than the billions the Trump administration had sought to press ahead with a crewed landing by 2024. In a statement, Acting NASA Administrator Steve Jurczyk said the request would keep the agency “on the path to landing the first woman and the first person of color on the Moon.” The remark is NASA’s first indication it is specifically planning for a person of color to participate in a lunar landing.

The Biden administration also plans to seek a $325 million budget increase for the Space Technology Mission Directorate aimed at supporting the commercial space industry and “novel early-stage space technology” for clean energy. An increase of $86 million for the Aeronautics Research Mission Directorate would support technologies related to “highly efficient, next-generation airliners.” An additional $20 million for the Office of STEM Engagement would “expand initiatives to attract and retain underserved and underrepresented students in engineering and other STEM fields.”

NSF’s budget would increase from $8.5 billion to $10.2 billion. Of the increase, $1.6 billion would be distributed across NSF’s research and education directorates, with funding for activities related to “climate and clean energy” increasing by $500 million to $1.2 billion. The budget also includes a 50%, $100 million increase for STEM workforce diversity programs.

An unspecified amount would go to a new NSF research directorate designed to “translate research into practical applications.” The directorate would work with other agencies and non-federal organizations to “expedite technology development in emerging areas that are crucial for U.S. technological leadership, including artificial intelligence, high performance computing, disaster response and resilience, quantum information systems, robotics, advanced communications technologies, biotechnology, and cybersecurity.” These fields align with the technology priority areas identified in the bipartisan Endless Frontier Act, which likewise proposes to create a new NSF directorate.

While the request does not specify a topline for NIST, it proposes to increase the agency’s main research account by $128 million to $916 million. Priority areas include “climate-resilient building codes, computing, cybersecurity, and artificial intelligence, quantum information science, biotechnology, and advanced manufacturing.” The administration also states the increase would be used to establish prize competitions that “pursue key technology goals to benefit all Americans.”

Citing an interest in improving supply chain resilience, the administration proposes to boost funding for NIST’s manufacturing programs from $167 million to $442 million. Of the increase, $150 million would support two new Manufacturing USA institutes, including one focused on semiconductor design and manufacturing. In addition, funding for the Manufacturing Extension Partnership, which provides technical assistance to U.S. manufacturing businesses, would increase by $125 million to $275 million.

NOAA’s topline budget would increase $1.4 billion to $6.9 billion. The administration states the additional funds would enable the agency to “expand its climate observation and forecasting work and provide better data and information to decision-makers, support coastal resilience programs that would help protect communities from the economic and environmental impacts of climate change, and invest in modern infrastructure to enable these critical efforts.”

The administration specifically proposes $800 million of the increase go toward the agency’s climate research and resilience activities, including by expanding its drought early warning system and providing competitive grants for coastal resilience projects that “help reduce the costly economic and environmental impacts of severe weather events on communities.” It also proposes about $500 million of the increase go toward building “the next generation of satellites” to improve collection of data that underpins weather and climate forecasts.

NIH’s budget would grow roughly 20% to $51 billion. Of the increase, $6.5 billion would go toward establishing an Advanced Research Projects Agency for Health (ARPA–H) to “drive transformational innovation in health research and speed application and implementation of health breakthroughs,” with an initial focus on cancer, diabetes, and Alzheimer’s, among other diseases.

In addition, the administration seeks $110 million for NIH’s Climate Change and Human Health program, a $100 million increase, and proposes a similar boost for the Center for Disease Control and Prevention’s Climate and Health program. It also seeks to create a new Office of Climate Change and Health Equity within the Department of Health and Human Services, NIH’s parent department.

Department of the Interior

The administration calls for rebuilding “core functions and capacities” within the Interior Department that have “diminished in recent years,” identifying a need to invest in science and staff at the U.S. Geological Survey, in addition to supporting wildlife refuges, national parks, and other public lands. It proposes increasing support for climate science at USGS and other agencies in the department by $200 million, with a focus on providing information related to mitigation, adaptation, and resilience. The request states that these funds would “help ensure that coastal, fire-prone, and other particularly vulnerable communities have accurate and accessible information and tools to allow them to better respond to the climate crisis.”

The administration seeks about $1 billion for global health security programs, an increase of about $800 million over current levels. The funds would support efforts to prevent, detect, and respond to disease outbreaks around the world, including the development of a new multilateral health security financing mechanism to catalyze investment in pandemic prevention and preparedness activities.

To encourage global efforts to combat climate change, the administration proposes to quadruple funding for “international climate programs” to $2.5 billion. Of the total, $1.2 billion would go to the Green Climate Fund, which supports adaptation and emissions mitigation efforts in developing countries.

The Defense Department’s $704 billion budget would increase by $11 billion under the request. Without offering specific figures, the administration states that it “prioritizes” defense research, development, test, and evaluation activities. It also highlights efforts to promote the military’s resilience against climate change and to counter “emerging biological threats.”

Concerning the U.S. nuclear arsenal, it states, “While the administration is reviewing the U.S. nuclear posture, the discretionary request supports ongoing nuclear modernization programs while ensuring that these efforts are sustainable.” It offers no budget proposal for DOE’s National Nuclear Security Administration, though it highlights efforts to recapitalize the agency’s “physical infrastructure and essential facilities to ensure the deterrent remains viable.”

The administration proposes $599 million for R&D and innovation projects across the Department of Homeland Security, with a focus on “climate resilience, cybersecurity data analytics, and transportation security technologies.” It suggests this funding would “revitalize” the department’s R&D capacity.