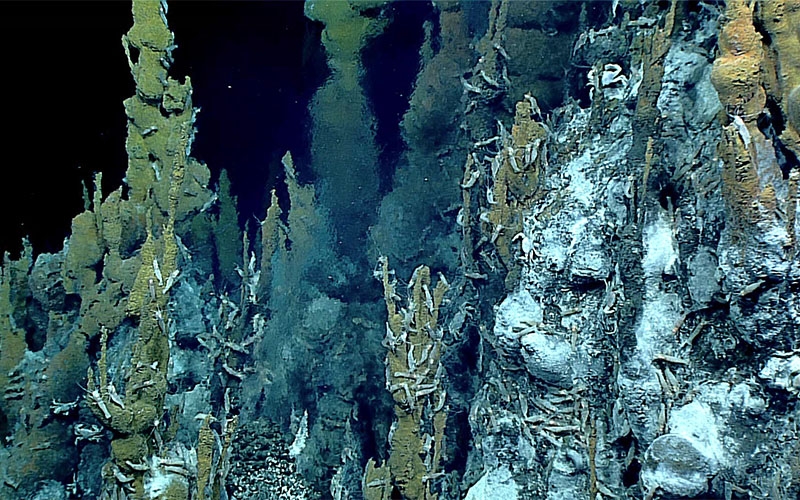 Life congregates around a hydrothermal vent chimney on the floor of the Pacific Ocean. The profusion of lifeforms in such environments has raised hopes that life might also exist in oceans beneath the surface of icy moons in the outer Solar System. (Image credit – NOAA Ocean Exploration, 2016 Deepwater Exploration of the Marianas)

Released this spring, the latest decadal survey for planetary science is the first to also assess astrobiology as a distinct but related field. The topic occupies three full chapters and features in others, reflecting the increasing importance of the search for life beyond Earth in motivating the selection and design of planetary science missions.

The survey report also offers strategies for interweaving scientific research with crewed space exploration and for defending the Earth from asteroids and other near-Earth objects (NEOs). These two subjects have recently grown in prominence as NASA’s Artemis campaign has put plans in motion for landing astronauts on the Moon and as planetary defense has become a more important focus within NASA’s Planetary Science Division.

In addition, this is the first iteration of the survey to examine in detail the state of the planetary science profession, following the lead of last year’s survey for astronomy and astrophysics. The report calls for urgent attention to improving diversity, equity, inclusion, and accessibility, finding there has been a “shocking” lack of progress in increasing the field’s racial and ethnic diversity over the past decade.

Delving into the challenge of searching for lifeforms of an unknown nature, the survey builds on a 2018 Academies report that stressed the need for astrobiology to foster transdisciplinary approaches.

For instance, the first astrobiology chapter addresses the relevance of probing the history of life on Earth and studying peculiar biological phenomena such as “extremophiles” living in environments that are seemingly hostile to life. “Insights gained from the biochemistry, structure and physiology of terrestrial organisms, and how they have evolved through deep time, are the basis to develop comprehensive frameworks to search for evidence of life on other worlds,” it observes.

The second chapter focuses on the concept of “dynamic habitability,” which concerns the planetary processes that may give rise to, sustain, and potentially extinguish habitable environments. It highlights the need to characterize different kinds of past and present habitable environments that could exist in places as different as Venus, Mars, dwarf planets, and the subsurface oceans of icy moons in the outer Solar System.

Finally, the third chapter outlines specific scientific and technological strategies for detecting potential biosignatures. Making the case that the requisite capabilities and conceptual frameworks are within reach, it asserts, “Four hundred years after Galileo revolutionized our understanding of our place in the universe, ours could realistically be the generation that triggers another scientific revolution, this time in biology.” 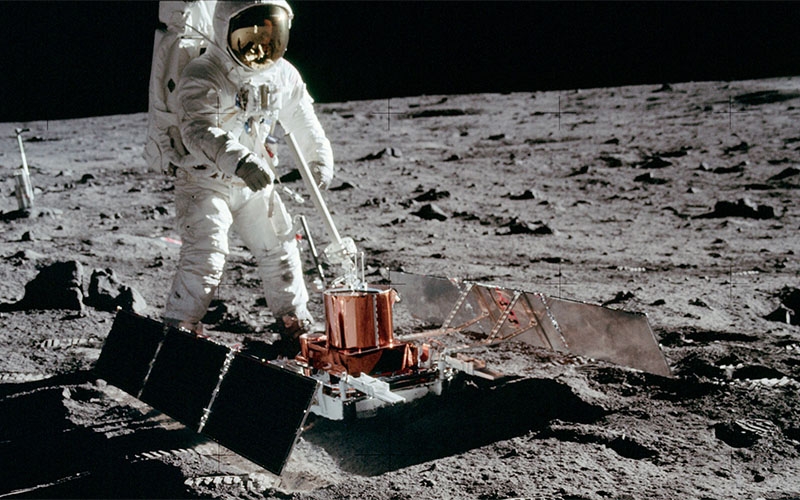 While NASA’s lunar science activities have without question been reenergized by the Artemis program, the survey states that much more could be done to integrate scientific and exploration activities.

It explains that astronauts can augment scientific work in a variety of ways, such as by undertaking close observations and real-time analysis, installing complicated equipment, reacting to changing conditions, and devising on-the-spot solutions to unforeseen challenges. As testament to what human-led work on the Moon and eventually Mars might accomplish, the survey points to the “scientific bonanza” that came from in situ measurements and samples collected during the Apollo missions a half-century ago.

In light of that potential, the survey criticizes how NASA has structured Artemis, lamenting that the agency’s science leaders have no authority to implement science goals within the plans for crewed missions. It suggests that the scientific return from the first crewed landing “will not be as significant as it could be, and may be minimal,” due to insufficient early planning.

Artemis leaders have said science will be a greater focus on subsequent missions, after the campaign’s landing technology has been fully proven out. However, the survey argues that NASA “has not demonstrated that actions are being taken now that will result in the effective and timely integration of science into the program.”

The survey does endorse NASA’s Commercial Lunar Payload Services (CLPS) program, which contracts commercially operated robotic landers to convey science payloads to the lunar surface. Yet, it is critical of the Lunar Discovery and Exploration Program that manages CLPS, asserting it is “not well coordinated or optimized to accomplish high-priority planetary science goals.”

In addition, the survey suggests NASA is not fully envisioning ways that robotic science missions and crewed missions could operate in tandem. It notes that such integration is “exemplified” in its own recommendation that NASA support the Endurance-A robotic rover concept, which would gather about 100 kilograms of samples for later retrieval by astronauts. The survey allows, though, that NASA should consider robotic options for returning a smaller quantity of samples if any changes in plans for Artemis make the astronaut-assisted plan infeasible.

Commending NASA’s creation of a planetary defense office in 2016 for bringing “leadership and strategic direction” to U.S. efforts to detect and potentially deflect NEOs, the survey recommends the office be “robustly supported and sustained.”

Due to budgetary pressure from other missions, NASA’s latest budget request proposes delaying from 2026 to 2028 the launch of its NEO Surveyor mission, an infrared space telescope designed to accelerate NEO detection. That proposal came too late to be considered in the survey, which urges that NASA “fully support the development, timely launch, and subsequent operation” of the mission.

Asked about the prospective delay at a congressional hearing on May 26 and whether Congress should maintain funding for the mission, survey co-chair Philip Christensen remarked, “Yes, we think that it needs to happen and it should happen quickly.”

The survey states that the highest priority for a planetary defense demonstration mission after NEO Surveyor is a “rapid-response, flyby reconnaissance mission targeted to a challenging NEO” that is about 50-to-100 meters in diameter. After that, the survey recommends NASA choose a mission that would either demonstrate more extensive threat-characterization capabilities, undertake a high-speed impact to deflect a small NEO, or demonstrate capabilities for deflecting a NEO more slowly.

All these recommended mission types would build on the Double Asteroid Redirection Test (DART), the first-ever mission designed to develop capabilities for deflecting NEOs with a kinetic impact. DART is currently headed to the Didymos double asteroid system, where this fall it will strike the system’s smaller asteroid as they pass close to Earth so that the dynamical effects can be studied.

State of the profession

Much of the survey’s analysis of recent demographic trends in planetary science is based on a 2020 survey the American Institute of Physics’ Statistical Research Center conducted in partnership with the American Astronomical Society.

The AIP survey was sent to 4,965 members of the planetary science community, yielding 2,367 responses. It found that 62% of respondents self-identified as men, 37% as women, and 1% as another gender identity. Across racial and ethnic categories, with respondents able to select more than one option, 83% self-identified as “white”; 13% as “Asian or Asian American”; 5% as “Hispanic or Latinx”; 1% as “Black or African American”; 1% as “American Indian or Alaska Native”; less than 1% as “Native Hawaiian or other Pacific Islander”; and 4% as another race or ethnicity. Within other identity categories, 10% self-identified as a “member of the LGBTQ+ community” and 15% reported having a disability.

The decadal survey notes that such demographic data only reach back historically to another AIP workforce survey carried out a decade ago. In general, though, the decadal survey reports there have been “some improvements in the representation of historically excluded people” over the past decade, pointing to increases among women and Asian Americans. Yet, it also finds there has remained a “severe underrepresentation of Black and Latinx researchers” in planetary science relative to their participation in the U.S. workforce.

To improve the diversity of the profession, the decadal survey offers strategies that NASA and the research community can use to root out bias and make the profession more welcoming. These include steps such as offering fellowships targeted to underrepresented groups and expanding training workshops on how to propose and participate in missions, as well as assessing implicit biases in agency procedures, with NASA’s recent adoption of dual-anonymous peer review cited as an exemplar.

In addition, the survey stresses the need to combat hostile behaviors and recommends NASA’s Planetary Science Division implement a code of conduct for field campaigns, conferences, and missions it funds and clearly identify points of contact for reporting violations. “The egregious nature of the sexual harassment reported in field work requires immediate attention by NASA,” it states.