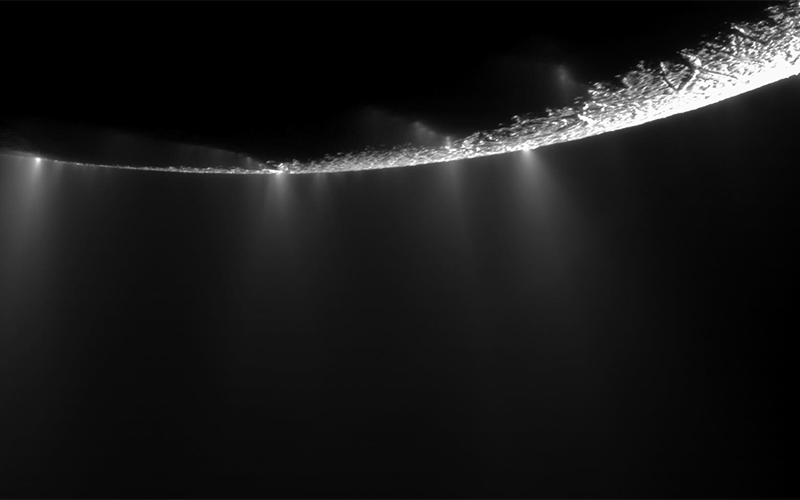 On Tuesday, the National Academies released Origins, Worlds, and Life, its latest decadal survey for planetary science. Assembled over two years, the survey synthesizes input from across the research community and will provide detailed guidance to NASA, and to a lesser extent the National Science Foundation, as they plan their support for the field.

The survey identifies 12 priority science questions that are organized into three main themes reflected in its title: the early history of the Solar System, the evolution of planetary bodies, and the search for conditions that can support life. Using planetary science investigations to understand exoplanets is also prioritized, but direct observations of exoplanets were not in the survey’s scope, having been covered in the astronomy and astrophysics survey released in November.

The scientific program the survey recommends is continuous with current efforts, endorsing the flagship Mars Sample Return mission that is already in development. The top-ranked priority for a new flagship is an orbiter mission to Uranus, a destination last visited in 1986 by the Voyager 2 probe. Following that, the survey recommends starting work on a mission to orbit and land on Enceladus, an icy moon of Saturn that expels vapor plumes containing organic molecules from a subsurface ocean.

Two specific medium-scale missions are also recommended: a Mars lander that would search for signs of life in the planet’s polar ice, and a lunar rover that would collect about 100 kilograms of material for later retrieval. In addition, the survey sets out options for other medium-scale missions, up to three of which could be competitively selected in the next decade through NASA’s New Frontiers program.

The last decadal survey’s top recommendation for a flagship mission led NASA to develop its Perseverance rover, which landed on Mars a year ago and is currently caching samples in the Jezero Crater, a region once covered in water that could have feasibly sustained life.

Now, NASA and the European Space Agency are developing the multi-vehicle Mars Sample Return (MSR) mission to retrieve those samples. MSR is currently NASA’s most expensive science mission project, and, although it was not directly recommended in the last survey, the new survey states that completing it should be the “highest scientific priority of NASA’s robotic exploration efforts this decade.”

If MSR’s cost to NASA substantially exceeds an anticipated total of $5.3 billion, or starts taking up more than roughly 35% of the NASA Planetary Science Division’s annual budget, the survey suggests the agency should “work with the administration and Congress to secure a budget augmentation.” Just prior to the survey’s release, NASA announced the mission’s costs are in fact expected to increase due to changes in its plans for landing the mission’s sample retrieval rover and ascent vehicle on Mars.

Uranus mission next in queue

A Uranus mission was the last decadal survey’s third-ranked flagship, and the new survey recommends that work begin on it as soon as budgets permit. It explains that Uranus is a compelling destination due to factors such as its extreme axial tilt, which suggests the planet suffered a catastrophic impact in its past, as well as the prospect that some of its moons may harbor a subsurface ocean similar to the one on Enceladus.

The survey notes that both the Solar System’s “ice giants,” Uranus and Neptune, remain poorly understood and that visiting either would be a high priority, not least since ice giants are thought to be common among exoplanets. Deciding between the destinations, the survey deemed Uranus more practicable because the mission could employ a launch vehicle that is already available and will have viable launch opportunities throughout the 2030s. Conversely, the survey concluded there are fewer options for launching to Neptune and they would require overcoming significant technical hurdles.

The survey anticipates the Uranus mission would cost $4.2 billion in fiscal year 2025 dollars and states that it carries the lowest technical risk of all the flagship mission concepts that were analyzed. If work commenced as early as fiscal year 2024, the mission could be ready for launch by the early 2030s, which would allow a 13-year cruise to its destination. Later launches would entail a 15-year cruise.

Work on the Enceladus “Orbilander” would likely begin no earlier than fiscal year 2029. After arriving at its destination, potentially circa 2050, it would spend about a year and a half conducting investigations from orbit, such as sampling the moon’s vapor plumes. It would then descend to the moon’s icy surface, where it would attempt to detect signs that life exists in the liquid ocean beneath.

The Orbilander is anticipated to cost about $4.9 billion in fiscal year 2025 dollars. The survey concluded the case for it was more compelling than it was for sending a lander to Jupiter’s icy moon Europa, which would follow the multiple-flyby Europa Clipper mission NASA plans to launch in 2024 and would cost almost $1 billion more than the Orbilander.

Justifying its prioritization, the survey cites a lack of firm knowledge of plume activity on Europa as well as a more challenging environment that would shorten the surface mission’s duration. Several years ago, Rep. John Culberson (R-TX) used his influence as an appropriator to press NASA to conduct a Europa lander mission, but that effort was criticized as premature and has fallen by the wayside since his departure from Congress.

While “ocean worlds” like Enceladus are a focal point in the hunt for life in the Solar System, the survey also advocates continuing the search on Mars. Noting the Mars Sample Return mission aims to find evidence that life existed there in its ancient, watery past, the survey recommends NASA turn next to a medium-scale lander mission called the Mars Life Explorer that would drill into the planet’s polar ice to look for habitable conditions in the present.

“‘Are we alone?’ is one of the most profound questions that can be addressed by Solar System exploration,” the survey explains.

The survey’s top priority for NASA’s lunar science program is a medium-scale rover concept called Endurance-A that would traverse about 2,000 kilometers across the Moon’s South Pole Aiken basin, collecting samples for later collection by astronauts.

Unlike the Volatiles Investigating Polar Exploration Rover (VIPER) mission, which NASA plans to launch in 2023 to look for ice deposits in the same region, Endurance-A would investigate the unique geology there. The basin’s low elevation is believed to have resulted from a major impact and studying it may yield clues about the early history of the Moon and Solar System. 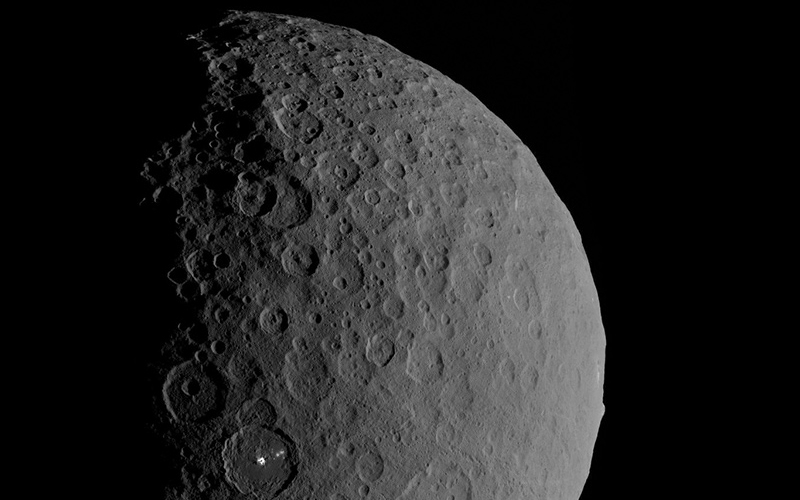 A photo of dwarf planet Ceres, the largest object in the asteroid belt between Mars and Jupiter, taken by NASA’s Dawn spacecraft in 2017. As a candidate for a medium-scale mission, the decadal survey recommends an effort to retrieve a sample of brine deposits found on Ceres and investigate the dwarf planet’s habitability potential. (Image credit – NASA/JPL-Caltech/UCLA/MPS/DLR/IDA)

NASA has wavered on when it will make its call for proposals for its next New Frontiers mission, first deferring it from 2022 to as late as fall 2024, and more recently indicating it might be released in 2023. The survey states that candidate themes for the mission should not be altered from those initially proposed. These include, among other possibilities, returning a sample from a comet, probing Saturn’s atmosphere, conducting a Venus surface mission, and setting up a network of geophysical instruments on the Moon.

For the call to follow that, the survey recommends adding as new candidate themes: an orbiter-lander mission to one of the icy “centaur” objects in the outer Solar System, a mission to return a sample from the dwarf planet Ceres, and an orbiter mission to Saturn’s moon Titan. The survey also suggests a multiple-flyby mission to Enceladus could be pursued should budgetary constraints preclude the Orbilander mission.

If there is a third New Frontiers call in the next decade, the survey recommends adding a multiple-flyby mission to Neptune’s moon Triton as a candidate theme, given that a favorable trajectory will be opening. Because Triton is icy and has a retrograde orbit, it is believed to be a captured Kuiper Belt Object, and the mission would assess if it has a subsurface ocean, among other tasks.

The ambitious slate of missions the survey recommends would be made possible by building on the current $3.1 billion annual budget of NASA’s Planetary Science Division. That level of funding is roughly double the level that prevailed a decade ago, reflecting Rep. Culberson’s influence and the generally strong impression NASA’s successes in planetary science have made in Congress.

Now, the survey encourages NASA to embrace more expensive mission concepts, arguing the higher scientific returns are worthwhile. It specifically recommends that NASA raise the lifecycle cost cap on New Frontiers missions, excluding launch costs, to $1.65 billion in fiscal year 2025 dollars. It notes that the original $1.14 billion cap on the cost of developing Dragonfly, the latest New Frontiers mission, is set to be exceeded by a considerable margin.

Similarly, the survey recommends the cap on lifecycle costs for small-scale Discovery missions should be raised to $800 million. The cap on development costs in NASA’s most recent call for Discovery program proposals was $500 million.

Setting out overarching mission priorities for the next decade, the survey divides its vision into a “level” funding scenario, involving annual budget increases of 2%, and a “recommended” profile that would be 17.5% higher than the cumulative decadal budget under the level scenario. The differences between the scenarios would affect matters such as how quickly work can begin on the Uranus mission, when New Frontiers missions can be selected, and whether work can start on the Enceladus and Mars Life Explorer missions before the next decadal survey.

The survey also enumerates decision rules should budgets decline. If that happens, delaying the Uranus mission would be the cutback of first resort, followed by reductions that would defer the start of new missions in other planetary science programs. Reducing funding for research grants is envisioned as a last resort.